Long story short - had hired a guide 2 seasons ago for my then 93 year old grandpa to get his first elk. He ended up getting one on public land with a crossbow at 53 yards. Bucket list item achieved!

Main guide had a helper guide who offered to take care of the euro mount which was very nice of him at no charge. He seemed like a stand up guy and we said sure and thanks. Got what we paid for...

After not hearing from him for 2 years, and me calling multiple times, he finally answered today. I knew the velvet went bad after the formaldehyde did not work, whatever, not the end of the world. But he told me today that the antler rotted from the inside out and was pretty well ruined. I asked for pics and told him Id come pick it up sometime next month - a 20 hour round trip drive.

Question is - should i just replace the euro spike mount with a different one? It was a big spike but i doubt my grandpa would ever know. It will end up in my hands anyway in the coming years. Also, how hard would it be to find a replacement and what might it cost?

Its a big bummer since it was a hunt that I will cherish forever. Even if its a replacement, Id like my grandpa to have something to reminisce with while hes still around. He turns 95 at the end of the month.

Thoughts would be highly appreciated. Thanks guys.
M

Man if I had a spike I'd give it to you.
Another option for replacement would be replica antlers. Some guys are dang good.
Also look up antler buyers and see what they have.
Best of luck.

Sorry for your loss... . I think your memories will serve you just fine. I throw away spikes and little antlers anymore, hardly do any taxidermy but that's just me. I hunt for the adventure, meat and memories. Digital Photos are the best, get one printed if you want.
OP

Thanks guys. Just exploring the options. Will never forget the most important part of the memory - time spent with my grandpa and dad. 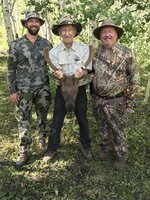 I have a spike skull you can have- I'll take a look tonight to make sure it's in decent shape. The spikes aren't that big but maybe take it to a taxidermist with that photo and they might be able to help you out. Shoot me a PM if you want it.

Sorry to hear that.

My daughter got her first elk last year. It was a cow, so there were no antlers to taxidermy. However, she wanted something to go on the wall next to her other animals. We ended up getting a nice framed picture of her with the elk. She loved it. Maybe even more than the big shoulder mount deer she has. There are some good places on line where you can upload your photo and they send you all printed and framed. Pretty slick. Just a thought.
D

I think if that were my Grandpa, I'd tell him what happened, give him a picture, tell him the memory will be with you forever.

I just don't see much sense in fibbing about it. You wouldn't want that to be one of your last interactions with your Grandpa.
P

He's 95. I'm sure not getting the Euro mount wouldn't even phase him. Get that picture framed really nice and tell him how much hunting with him meant to you. That would probably mean more to him than the antlers.

Also, did you get the buglers? Those are nice mementos. You could even have a ring or something made out of them.
OP

@Laramie Ill send you a pm. Appreciate the thought.

We have many pictures of the hunt framed in his, mine, and my dad’s houses. @PassCreek we did not get the buglers so thats an idea IF i can still get the original skull back.

I have told my grandpa what happened and whenever it comes up, it definitely gets him down. He was never a big game hunter so it was one of the few he killed, and being his first elk, meant a lot. I know he would still like some closure to it one way or another.

His health is still decent for now, so if the head/antlers bring back some happy memories while he still has them, that would be great. Thanks again guys. Love this site for all the great people and support.

I’m a grandpa and been hunting elk for 53 years. Tough luck on the mount, happens. That old boy looks like a man to run the river with, I’m betting he’d like a nice framed copy of that picture more than anything else....

I’ve some hard horned spike skull plates I can send you for gramps when I get back from Alaska in September.

out of curiosity how soft were the antlers? seems weird that they could still rot out at that time of year when there are plenty of spikes who are hard horned and stripped.
W

If the skull is still in good shape, replicas can be made and attached. They'll be fiberglass and fake velvet, but would match the pictures. Just a thought. It's not uncommon work for a good taxidermist.

If the antler is truly rotten and has a chunk missing you can rebuild it with Bondo (mix with some white hardener) if you just want to color the antlers. Research manikins in Oregon does artificial velvet, it isn't too bad but still isn't the same as real velvet.
There's plenty of options to preserve what you have but would be nice to see the picture of what happened first to go ahead with a plan.
OP

Thanks for all the suggestions. Since the guy didnt answer his phone for 2 years and I randomly got him today, I would be surprised to get the original. Ive had a few offers for replacements, so what I will do is probably is cover all bases. Try to get the original, and get a back up.

If I can get the original, I would try to have it rebuilt. Ill try to get pictures. If not, then there will be the new “original” and I wont hide it from him, but it will something to help bring back the good memories.

I'm willing to bet that if he had a choice between looking at a skull mount on the wall, or looking at that photo of the three generations of you smiling together while he holds that head, he'd take the photo every time. Plus, why lie about it?
OP

@Dirtbag Antlers were not that soft when he shot it. I wasnt surprised that we lost the velvet, but to hear the antler rotted was surprising. To me that means the guy left it in the sun and rain for the past 2 years. We had the skull down to bone when he took it.

Not going to lie to my grandpa about it - he already knows its messed up. Actually really liking the idea of having a replacement doctored up to closely match the original. I think that would make him content.

MokeBerserker said:
@Dirtbag Antlers were not that soft when he shot it. I wasnt surprised that we lost the velvet, but to hear the antler rotted was surprising. To me that means the guy left it in the sun and rain for the past 2 years. We had the skull down to bone when he took it.
Click to expand...

Agreed, losing the velvet is one thing, them rotting from the inside makes me a little skeptical. Hate to be negative and hope I'm wrong but I get the feeling he maybe didn't think you were as serious about the skull as you are and got rid of it.

Get the ivories and forget about the skull
You must log in or register to reply here.

A
How many inches to justify a shoulder mount for you?
3 4 5