Last year I won the Spring Into Adventure Photo Contest sponsored by SKRE and received a Hardscrabble jacket and pants, Wasatch crew top, and Hi Line hat. I'm a bit late posting a review of the clothing but wanted to put the items through substantial field testing before I made a judgement.

I'm primarily a southeastern whitetail hunter ('stand hunter') and run n' gun turkey hunter. However I did get to take my SKRE to New Mexico last September on my first elk hunt. I basically run n' gunned on my elk hunt like I do with turkey. Although whitetail stand hunting is not very active, I hunt 95% public land which often consists of .5 mile - 1.5mile walks in carrying a climbing stand and extra clothes. So it is important that the clothes I wear in breathe well so I don't get too hot and sweat.

I chose Summit Camo for all items as I wanted green in the pattern for turkey season and early archery. I am pleased with it.

Now on to the reviews:

I was pretty happy to receive the jacket as I was already planning on replacing an older light/mid-weight jacket of mine. I definitely needed the Large size so suggest ordering a size up. It is still a tad snug in the chest when i'm at my full winter weight but I like it that way to keep it streamlined. The sleeves have a 'shooter's cut' as some companies call it which is awesome for archery hunting. I utilized the jacket a lot during archery white-tail season and it fit the bill perfect. Very quiet, warm enough to use as my outer layer on stand sits down until the upper 40s. Love the pit zips! My first jacket with pit zips and found them extremely useful for dumping heat on the walks in and out. Convenient pocket layout. I also used the jacket as a 'middle layer' a few times when then temps dropped below freezing. Worked well for that too. The exterior seems to be very durable but I didn't abuse it as much as I did the pants. Did not get to test the DWR finish but assuming its like the pants, it will work great. The jacket definitely has earned its spot in my line up and will be used a lot on those cool mornings this upcoming turkey season!

Like the jacket, I also received these pants at the perfect time. I only had one pair of high-end 'technical' hunting-specific pants and they didn't fare too well against these southeastern thickets! Briars did a number on them. But the Hardscrabble pants held their own against the very same thickets and don't have the first rip or tear! There was some slight piling, but purely cosmetic. I really appreciated the DWR finish as it kept me dry when walking through wet brush. I normally wear a 32 waist but sized up to a 34 after reading reviews. I needed enough room to wear a base layer underneath. The 34s allow me to comfortably wear my 350g merino baselayer yet aren't too baggy without a base layer. Due to my short inseam, I did have to get the pants hemmed. The way the pants sat on my waist left a bit of a baggy crotch (not uncommon for me thanks to my build). To solve this I ended up almost always wearing them with a pair of suspenders. Just something to keep in mind if you are shorter like me. The 'sticky' waist band is a cool feature I'd never seen before.

I found the pants a bit warm for early archery season but as it get colder, the more I liked them. If temps weren't going to drop below the 50s, I think the Uintas would be best. But by the end of deer season (which runs until the end of Jan. here), the hardscrabbles were my #1 choice. When coupled with a moderate weight baselayer bottom, I could comfortably sit until temps hit the low 40s. Once it got colder than that I'd throw on some bibs and add a heavier base layer if temps dropped to below freezing. LOVED the hip vents. They kept me from having to strip my baselayers on the walk out after temps warmed up.

Do want to comment on the pocket layout. I found the 'regular' pockets a bit useless are they extremely tight. I ended up using the zipper thigh pockets instead, which is no big deal. Actually kept my keys from 'hugging' my thighs as they are prone to do in jeans.

For the 2018 hunting season, I'd switched to all merino baselayers. Before that I'd primarily worn mid-line 'snug-fitting' synthetics. The Wasatch seems to fall right in the middle of the two. Its not as snug as my former synthetics and feels better on the skin. As far as sizing, I would recommend ordering a size up. My merino base layers are Medium but I need a Large with the Wasatch.

Warmth-wise, the Wasatch seems to be slightly warmer than my 200g merino. So maybe comparable to a 250g merino? It does dry a bit quicker as expected with a synthetic. I wore it for a couple days during my September elk hunt and it eventually started smelling a bit 'off' in the armpit region. Nothing really that stinky (and i'm not one of those with bad BO), but kind of odd smelling. During deer season, I never let it get to that point as I'm more concerned with scent control. I would wear it for several hunts then wash. Never had the odd smell again, of course I didn't sweat as much as I did during Sept. elk.

I was kind of leery on the durability against the aforementioned southeastern brush and briars, but the Wasatch surprised me! Just some piling that would go away with a wash.

I like the Wasatch top and it has also has earned its place in my clothing line up. It is now the only synthetic among my 6 base layer pieces. Is going to be great for early turkey season!

Like a lot folks, I have my 'lucky/favorite' hat so really didn't get to test the Hi-Line too much. But I can say that it is a fine hat. I have a big head which it fits well. May a bit large for folks with little heads? Really nice buckle adjustment on back. May be a bit heavy when its warm out, but I didn't wear it enough to make an honest judgement. You can tell it is quality fabric and I'd bet this hat would last a long time! No cheaping out on it... It currently sits as a back up. Going to try to wear it more this turkey season.

Didn't mean for the reviews to be so long-winded, but once I got started I felt the need to hit on all aspects of the clothing. Its the least I could do since the guys at SKRE were gracious enough to sponsor the contest. I'm very pleased with their products and would encourage folks to give them a try!

Lastly, here is the photo that won me the contest. 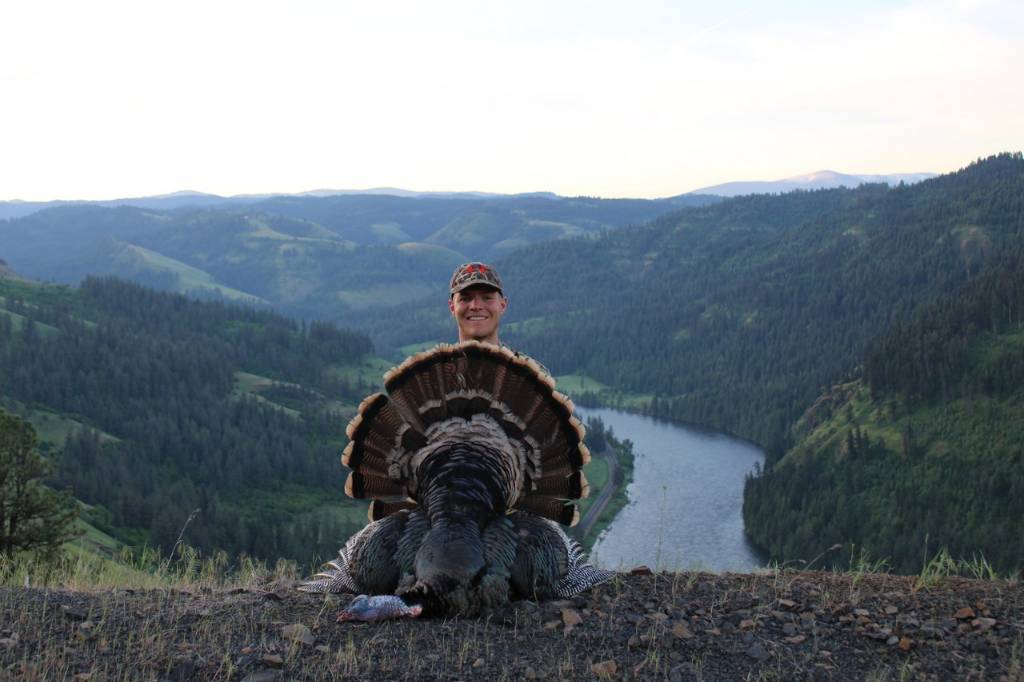 Hey man, thanks for all the feedback. I know there’s gonna be a bunch of guys that will find this useful.

I also struggled with the tight hip pocket “lids”, and eventually decided that was where I wanted to put stuff that I didn't need often and could not lose, like my Chapstick or a lighter.

I used the side pockets much more like you did.