Just returned from a great trip with my oldest son. We saw bears every day, all at reasonable shot distances. My son had the first day jitters and missed a solid black bear on the first day at 430 yards. Our style of hunting is to find a good vantage point and sit all day. No other bears showed up that day. On the second day we tried a different approach to the same location. We had just popped through some miserable brush when Gavin saw a small snow staring at him a short distance away. He quickly found a rest on a fallen log, and as soon as she stopped, he took the shot. We knew she was small, but we’re still surprised when we walked up to her. Oh well, when you have two tags in your pocket your not real choosy on the first one. 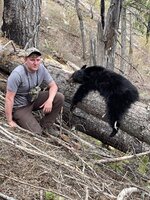 Our third day I was shooter. We had a 3.5 mile hike down the trail to get to our ridge. One I hadn’t been to for several years, so we got an earlier start. About 9:00am.

We spot all of our bears after noon, so we’re never in a rush in the morning. We had made our way off trail darn near to our sitting spot when Gavin spotted a bear way above us. I started up a minor ridge trying to get a little closer to the bear. I knew I had a small chance of seeing him again, but had to go for it. I was about hal up when I heard Gavin shoot. I was happy for him, but slightly miffed because I just burned lots of energy for naught. Although Gavin was certain of a hit, we combed the entire hillside without finding any sign of a hit.
With only 2 days left to hunt on this trip, I told Gavin he was designated shooter the rest of the trip. I had the next week off as well so I could hunt another spot closer to home, plus I have a regular tag for the rest of the state.
Day 4 started out cool and overcast, perfect as far as we were concerned. We tried yet another route up the same ridge where Gavin had missed the bear the first day. He wanted to try to find a sitting spot lower down towards the bottom of the canyon in an attempt to close the distance for any shots. After spending the afternoon sitting through several rain showers, I finally spotted my first bear of the trip. I had saw 3 of the 4 bears so far but had yet to spot one first. We quickly made our wat down the slope to close the distance even more. Luckily the bear was below us feeding. We found a spot at 2p0 yards for Gavin to shoot from. Of course at the shot, the bear took off like lightning, headed for the thick creek bottom. I was able to find blood 20 yards or so from where the bear was standing. Because of the rock cliffs and thick brush tracking was slow and tedious. I started to get concerned that we might lose this bear in the actual creek. The blood trail led us between cliffs and the creek with barely enough room for me to track him. By circling above me, Gavin was able to spot more blood. Then he yells out “I see him”! As you can see in the pic, we almost lost him. 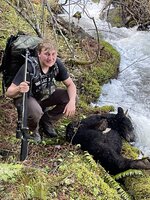 With 2 of 3 tags we were pretty optimistic going into the last day. The third member of our party had spotted a bear the day before that was too far for a shoot. He’s an older guy that took me under his wing a few years ago and showed me all of his “secret” spots. As we made our way down the trail we talked to another hunter from Missouri. He told us he had shot 2 bear while sitting on the trail right where he was. After leaving Tony, I told Gavin “I want to be that guy that shoots a bear from the trail”. A couple miles later while I was checking Gaia for our take of point from the trail, Gavin says I see a bear. Sure enough 300 yards away laying on a rock outcropping is a bear. I get set up prone waiting for the bear to Stand. Finally a half hour later at 12:30 the bear stands. At the shot the bear falls off the ledge into the brush. Shortly after he starts rolling down the hill. Thank goodness too because it’s almost straight up to get to him. We were ecstatic, 3 for 3 tags filled in 5 days. It doesn’t get any better than this. Pretty awesome! That's a lot of bears in a short time frame! I'm still trying to find my spot that produces like that!

Sent from my SM-G981V using Tapatalk

Awesome work
You must log in or register to reply here.

Another spring of bear hunting with kids