What's the advantages and disadvantages of a steripen? Wat is the best model? And is it completely safe to just use the steripen if ur not worried about floaters? Also the setting il be using it mostly is in Colorado so mostly pretty clean water, and the area is water plentiful. Thanks

It's battery operated so can quit like any electronics. Pretty sure it kills viruses and bacteria but not bugs. I don't know the model differences.

Sent from my SM-G930V using Tapatalk

It also doesn't work as well in murky water

Sent from my SM-G930V using Tapatalk

instant (well 90 seconds for a liter) drinking water, no funny taste- mine is going on five years now; I test the batteries in mine before a trip- also keep spares, but they use the same battery as my headlamp

mine is the Opti- two CR123 batteries, it used to be the lightest one, not sure if that's still the case

I couldn't tell you the model I have but I'm happy with it. Mine is USB rechargeable which is nice to be able to charge it from my goal zero. It works quickly and can purify a lot of water on a charge. If its murky you can pre-filter with a bandana or any other sieve style filter. It pretty much requires you to use a Nalgene bottle to control the volume and proximity to the water. Mine has an easy to read display, I believe thats an improvement over previous versions.

As with all filters its a good idea to have some drops as a backup.

I still use narrow top Platypus bottles; for treatment I took a 2 liter Platy and cut off the top a couple of inches above the 1 liter mark- this makes a great scoop for getting water, easy to treat and will stand on it's own. The Opti fits in it and then I just roll it up. All of 0.5 ounces.

Aron tested it quite extensively with regular pumps, and it always treated the water as it was supposed to. So that's a good enough reason for me to trust it, to an extent. I think if your going into super unknowns where the water is probably stagnant I'd bring the pump. But with the pump make sure that filter is in good condition, if it freezes and cracks it's basically a pre filter and any bad bacteria is not going to get treated.

Biggest advantages are the weight and size. Biggest downfalls I suppose are the batteries (potentially, but they do have great battery life) and there isn't a pre filter, unless you go get a sift or something. 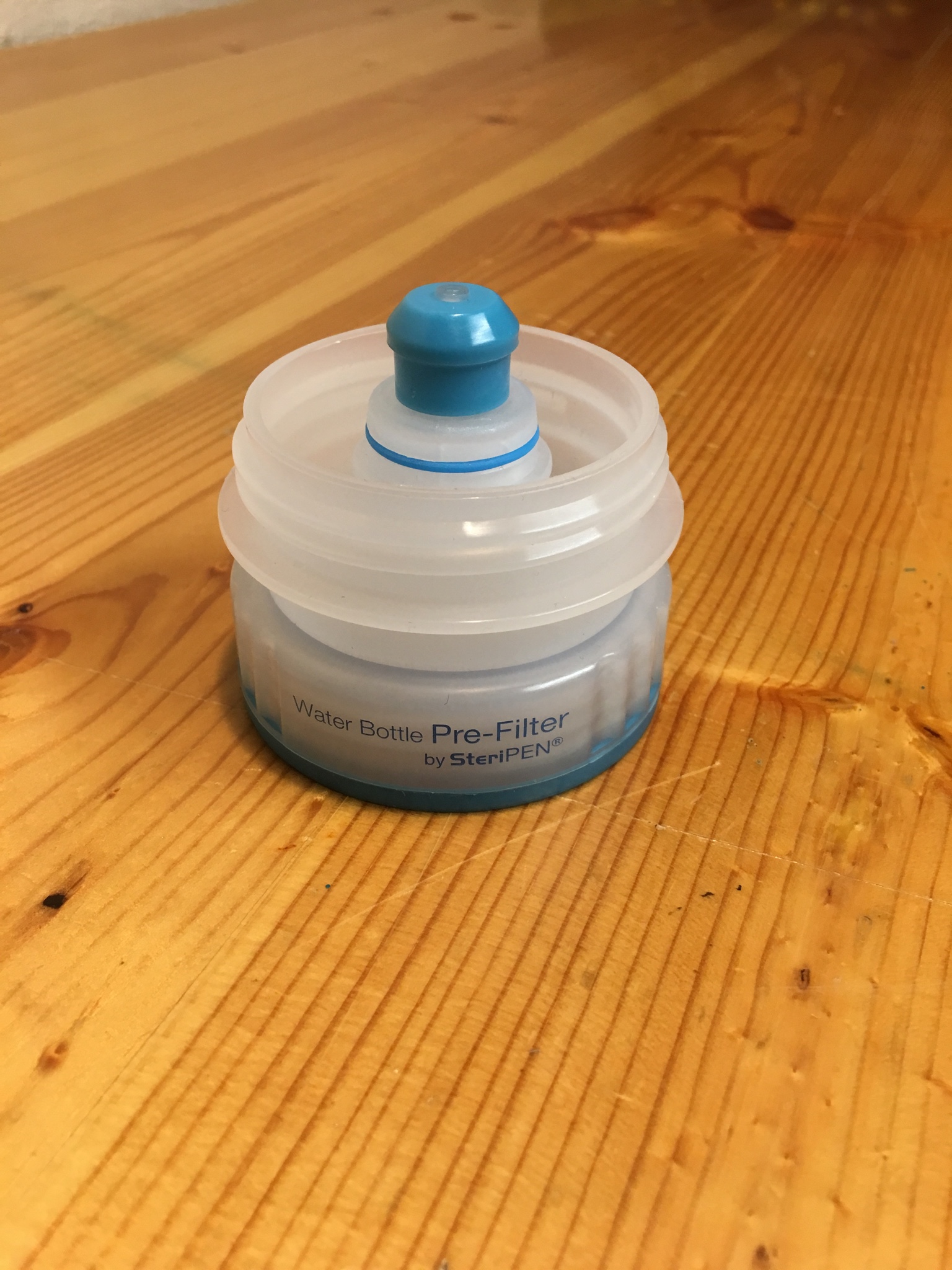 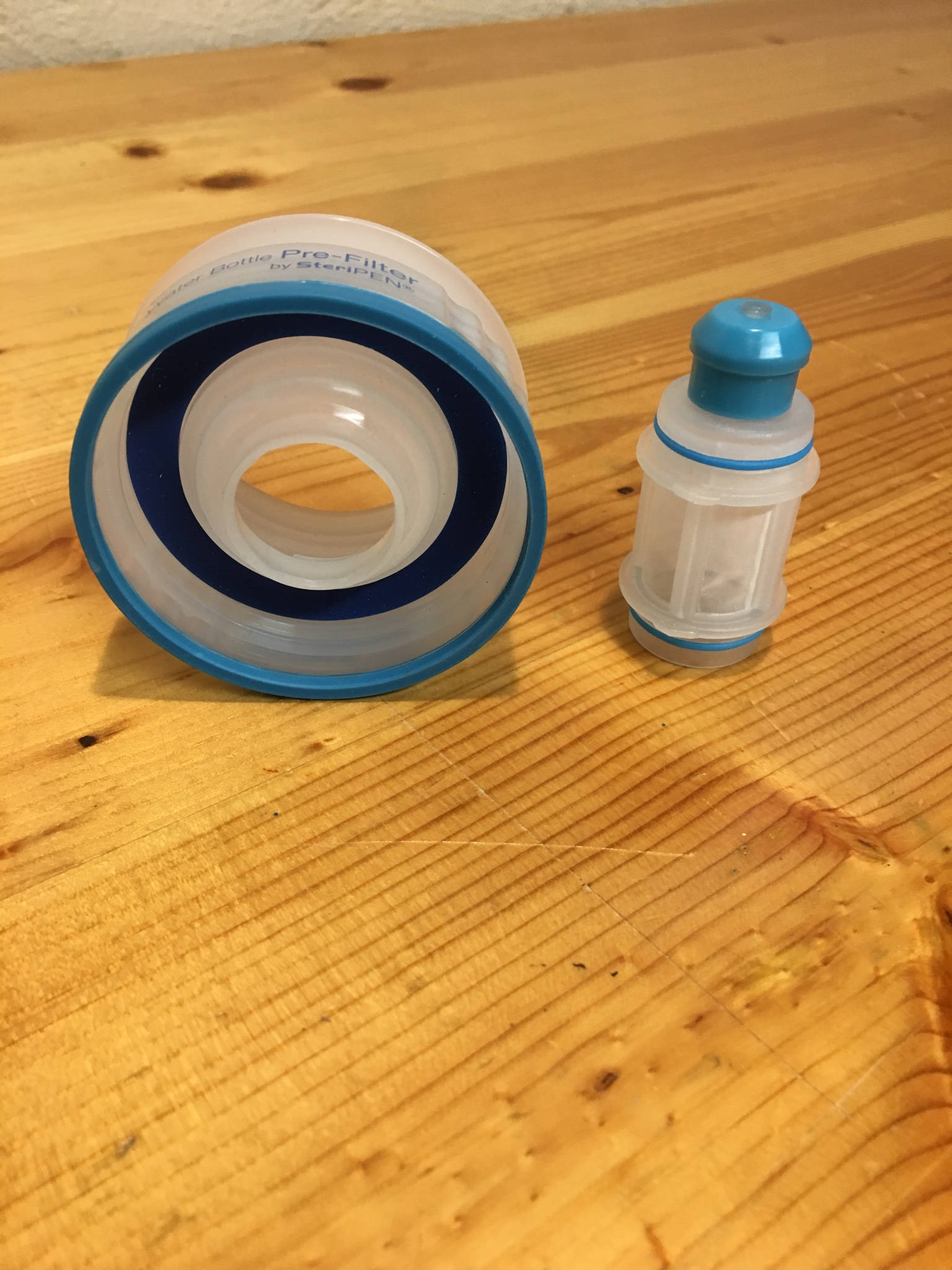 So far i only had one issue with my Steripen and it was caused by water damage (odd i know). Basically, the back cap was not seated properly when i swapped out the battery, water got in it, and shorted out the pen. Their customer service took care of me, got me a new one, and it has not failed me since. Just be sure that cap is screwed in tight.

Simply put: The Steripen (Classic is best) will purify water, but not keep bugs etc. out. It will do 1L in 1.5 min and it will work in the freezing temps (provided batteries are good). So, great for some applications.

Other methods will freeze and not work (Aka Sawyer) below freezing temps. But, they will do large volumes of water more efficiently.

That said, I like the Steripen Classic. It's proven and gets the job done.

I'm only going to talk about the Classic, since that's what I've had for ~4 years now. I'm also using it in the Sierras, where the water quality is exceptional. If I were not originally from Alaska and terrified of Giardia, I'd probably be comfortable drinking most moving water around here untreated.

It won't kill tapeworm eggs, but they're very easy to remove with IIRC a 40 micron filter (the prefilter mine came with, or probably even a bandanna). I am under the impression that tapeworms are not a concern in the areas I'm in, so it's kind of irrelevant to me anyway. I don't care for the prefilter BTW. It's kinda slow, and it takes up more room in my pack than I want it to. It works fine though, and if I were not typically scooping water from the clear streams and lakes around here, I'd probably feel different. The worst I ever get around here without filtering is a teaspoon of fine gravel in the bottom of my bottle.

I recently started carrying a head net for bugs (there's no mosquitoes around here so I feel out of the habit when I moved). It works great as a pre-filter, and I also use it over my mug to pour boiled coffee grounds through. Makes the same coffee I make at home with a French Press without adding any significant amount of weight to my gear.

I've never had issues with the batteries in my SteriPen, although I've read that some people have issues with them discharging during storage. I've always used lithium Energizers, and they've never run out on me. I've replaced them a few times just out of concern after being in storage for many months and put them in something in the house to use them up, so I'm not really sure how long they'll last. I've used them on multiple backpacking trips spread out over a season though without having them run out, so I have no concerns over going on a multi-day trip with fresh batteries and leaving the spares at home at this point. I always have a backup method of treating water no matter what I use.

Mine works fine with Smart Water bottles. I read about a bunch of complicated ways people modify containers to work with the SteriPen, but the entire UV light is well past the neck of the bottle when I use it and works fine. Main reason I point this out is that I've switched to these bottles because they also work great with my Sawyer Squeeze, and I like the squirt cap they come with. It's great for drinking on the move, irrigating a wound, quick shower, etc. The CapCap for Nalgenes works great with the SteriPen also, as does the SteriPen pre-filter cap (if you pop the filter out, it's the right diameter for the rubber part of the pen to seal against).

The lights on the pen are annoying to read in the sun. I'm colorblind though and can never remember which one is which. I could solve this with an engraving tool pretty easy...it's just that color-coding things is a pet peeve of mine with as common as male colorblindness is. They might as well write the instructions in Spanish instead of English while they're at it as far as I'm concerned.

It's kind of heavy compared to a Sawyer, especially if you're carrying a bottle that you can also use to backflush the Sawyer with. My Sawyer is about 3 oz wet. That said, I might be inclined to leave the Sawyer home if I plan to be in freezing temps a lot and I don't want to keep it in my pocket.

I think the SteriPen is supposed to work on viruses that most filters don't. This is also something I'm not concerned about with the water sources I use, so I haven't bothered to memorize much about it. There isn't much poop in the water around here. I'd be more concerned if I were drinking water out of beaver ponds or next to cattle or something.

I don't really see the murkiness thing as a disadvantage. According to the videos and images I've seen from the manufacturer, it will operate just fine in water that really doesn't look very appetizing anyway. I'd want to prefilter it at that point just for the psychological aspect. I used filters quite a bit growing up in Alaska, and I usually prefiltered water to avoid the silt plugging up the filter anyway. Aquamira has an extended treatment time of like 4 hours or something when used in turbid water, so it's not any better (worse in my opinion).

Overall I'd say I choose the SteriPen when I'm on quick hikes where I want to be able to scoop the water and go back to moving while I'm treating it, and then guzzle it quickly. I especially like it when I'm out all day fishing in the canoe. Screwing my Sawyer on to a bottle and drinking right out of the filter is pretty much just as convenient, but I kind of like drinking out of a Nalgene in the canoe because it fits in the cupholders snugly and isn't as tall and easy to knock over. Lately when backpacking with my girlfriend, I've been carrying the pen and she's been carrying the Sawyer. We use the Sawyer to treat large amounts of water set up as a gravity filter, and the pen to treat water while we're hiking. I really don't have any complaints with either system.

I'd say the pros/cons of any system are more dependent on what you like to carry/drink water from more than anything. The SteriPen is a little less practical if you need to treat many liters at a time I suppose, unless you're comparing it to a filter attached to a one liter container. I don't think there's anything that gets you treated water much faster than about a minute/liter, other than a gravity setup with a big reservoir. But then, setting up a big gravity system and filling it with water takes a few minutes also. I'm more lazy than in a hurry, so timing things down to the second seems kind of silly to me.
Last edited: Jun 29, 2017
You must log in or register to reply here.