I’m looking at a good lightweight tent for mostly mule deer hunting a few times a year and I’m the next couple years elk hunting. Stumbled upon tarptent and they seem to be a great balance between quality but still not overly expensive. Probably looking at a double wall solid for later season hunts as well. Opinions on the momentum DW and scarp? Those seem to be what my criteria are aiming me at. High winds are also not uncommon in my area.

Just got the scarp, only set up in the back yard. First impression is very easy to setup and takedown, tons of room on the inside and very small footprint. I’m very excited to try it out.

I have an aeon Li. Used it for 10 days so far. I like it and it held its own on some windy nights. Sheds rain as expected. This version doesn't have a zipper. I will take the penalty in weight for a zipper vestibule next time! I also wish it had two vestibules. For early season hunts with minimal chance of rain etc the aeon Li would be my pick. I want to use this tent in early fall where rain and some snow is likely, therefore I just ordered the notch li, with is almost identical except it has two vestibules.

I'm a big guy, prefer a taller tent so I got the SS2. All my gear fits inside, not rodents munching my stuff. 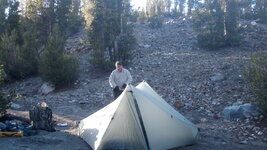 I picked up a double rainbow, really like it. Got the liner for colder weather.
You must log in or register to reply here.

B
TarpTent Moment DW; will it stand up in freak storms/wind?