The Elk "Grip and Grin" contest!

I started to feel left out, so I thought we should have an elk "grip and grin" photo contest!

Just like in the mule deer section, we have decided to make this thread a photo contest and the winner will receive a Rokslide hoodie!

Here is how the contest works: Post up your best grip & grin photo between now and April 30. On May 1, the Rokslide staff will choose what they feel are the best three photos.

On May 1, Rokslide will post up their top three photo choices along with a poll so that all registered forum users can vote. The voting will remain open until May 31. The photo that receives the most votes will be the winner!

Although that SOB had a body like a 7 year old!
OP

What camo is that vest?

my first archery bull from montana in 2010

its a dickies fleece vest in camowest vanish, but its apparently hard to find now. i wish more large manufacturers would start making patterns like that.
Last edited: Mar 9, 2012
OP

On September 26, 2004, it was the last day of western Oregon archery season. I was at Notellum Creek and it was hot. Down the ridge, I heard the loudest bugle I'd ever heard. I came around the corner to see a GIANT 8X7 Roosevelt bull about 50 yards away. I made the mistake a lot of newbies make and did not adjust for downhill. The arrow hit the top of his back in top of the hump. It makes me sick to see game wounded. I didn't find blood after 1/2 a mile of trailing. I followed tracks in the mud for an hour though and he had gone uphill, which told me he was not badly hit.

On September 10, 2010 , I was hunting at Wouldn'tchaliketaknow Hill (a few miles from Notellum Creek. I'd been watching that big bull the past 6 years (he survived). I've had him close many times but never close enough. I spotted his herd (19 cows, 4 calves and the big guy) 1/2 a mile away in a brush patch. I walked to where they had been and screwed up majorly by stepping on a stick, scaring the cows. I noticed that the bull had not left yet, so I waited and he came around the corner. He was roughly 40 yards away and moving fast. I mouthed a cow mew and he stopped in his tracks. I let fly and he stumbled downhill. I knew he wouldn't go far because I hit both lungs and the top of the heart. All this had happened at about 7:00, just before dark. I once again felt sick to my stomach when I couldn't find any blood (It was a jungle of blackberry briars).

I called in my Father and Stepmom to help find the bull. We looked a whole lot, circling all over the hill and found nothing. At about 11:00 pm I smelled elk, not the smell of just elk pee, but the smell of a large bull elk itself at pretty close range. We were tired of searching and nearly gave up. I was positive the elk was dead and was not willing to give up yet. Dad was heading back to the truck and loudly (almost frantically) said he needed help. I thought he was stuck in the briars, but was instead trying to lift the rack of a true giant out of a bush. The elk was the most beautiful animal I have ever laid eyes on. His antlers were shorter than in 2004, but were far heavier in mass and I'd bet he was at minimum 1,200 pounds live weight (like a common beef!). My theory is that old wounds slowed him down, making his metabolism slow as well, which made him the hulk he became. What a pack!!!

We took him out in 7 pieces and it was like one of those nightmares you can't wake from, the briars were terrible and our flashlights were dim. It was worth it though, it was the fruition of a hunt that spanned 7 seasons and nearly drove me insane. It was 3:30 in the morning when we finally got done. What a night and what a backache!!!

When we were butchering the meat, my Grandpa found something I never expected. There was a ball of sinew on the top of the spine, just above the shoulder. We cut it out with a saw. In the top of a vertebrae we found half of MY OLD ARROW. It was a nickel plated ThunderHead on a custom made shaft, the very arrow I sent in 2004. It had bone spurs wrapping the blades like spider legs and had become part of the bone (still very sharp too I found). I boiled and bleached it and plan to hang it next to the mount. I couldn't believe how things just fell into place for the monster bull which had become somewhat of a legend in my eyes, to finally fall.

I thank God for blessing me with such a tremendous supply of tasty meat and such an excellent trophy. It was bittersweet, because he had been such a major part of my archery career up to that point. I suppose I need to find a new mythical beast because this hunt is now over.
Last edited: Mar 9, 2012

i guess its called dark timber, looks like camo west stopped making it.. that sucks
M

Keep it in the family and start them young!

I am not eligible for the contest but here are my three biggest GRIN'S with a bow! 1025 inch's of Bone from AZ, NV, & OR. 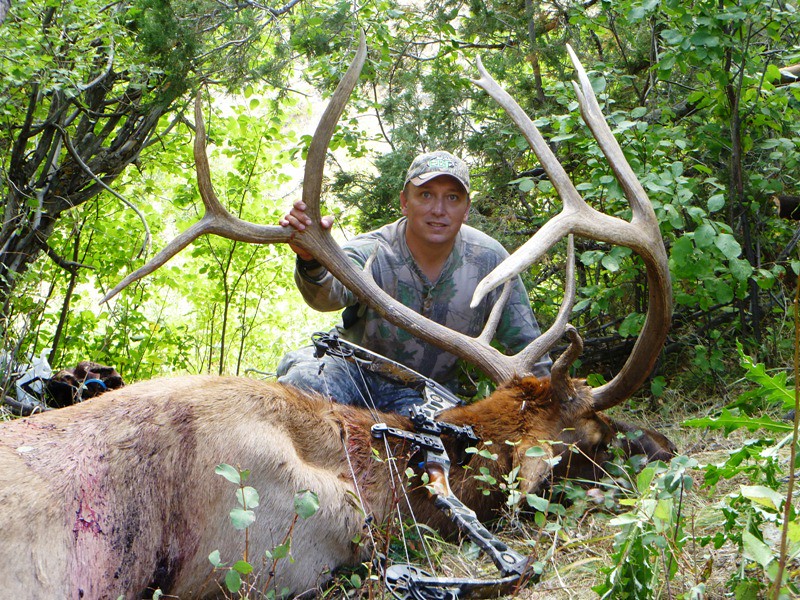 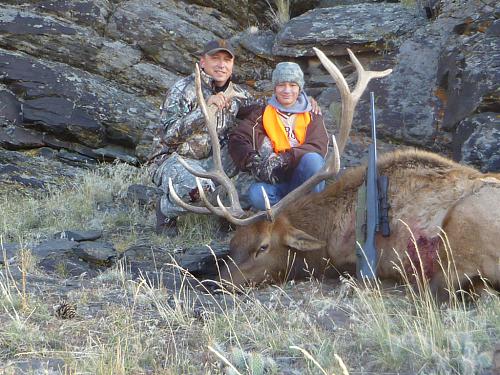 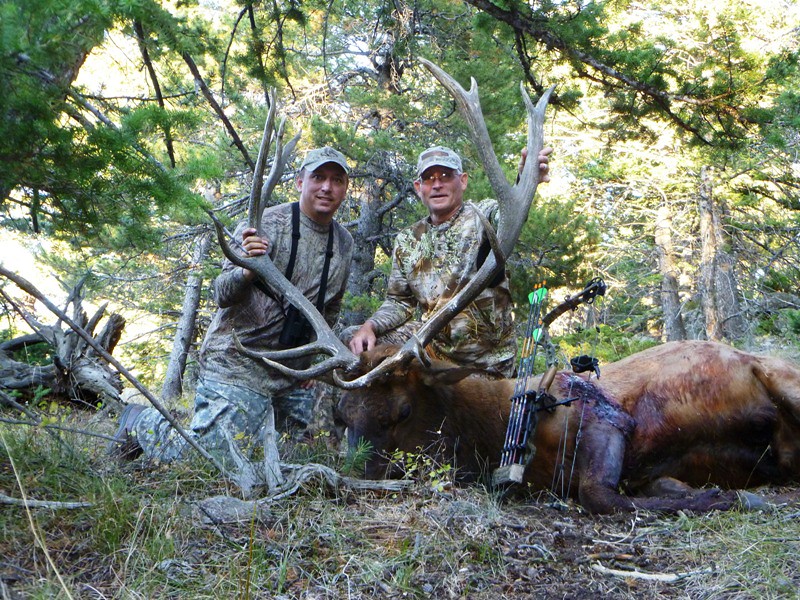 Couple from the past few years... 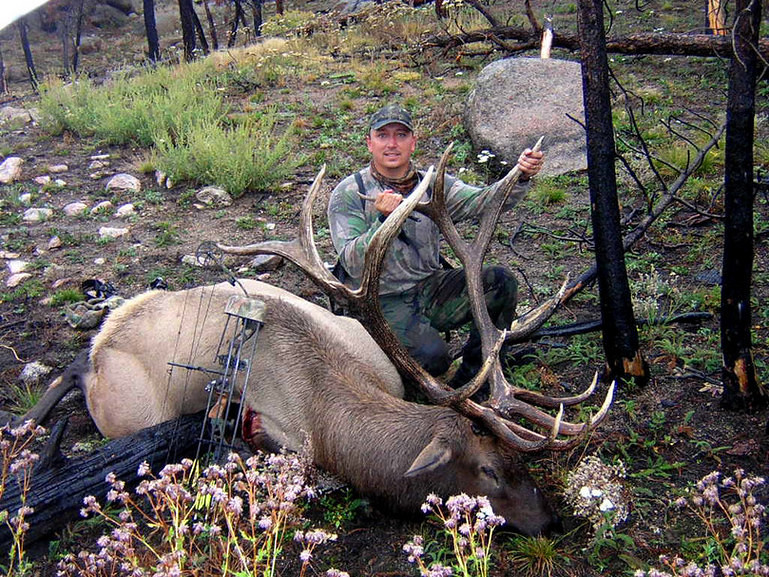 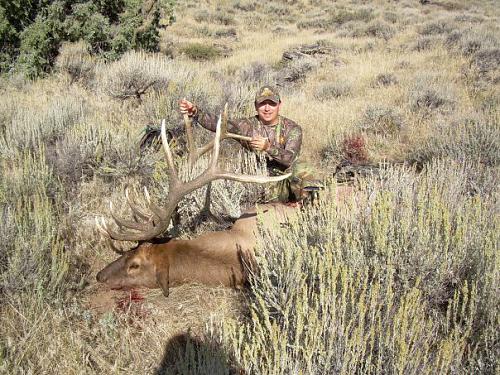 Here's a couple decent ones.

gil_wy said:
Couple from the past few years...

can i follow you around in September for about the next 10 years? thats gitten er done elk killer!
OP

No camera when this one died, but I was grinning!

Huntin Bud, that was quite the saga and an impressive bull! Nice work............
You must log in or register to reply here.

Vote on the 2021 Best Elk Photo, sponsored by Kifaru
2