I keep seeing archery spot and stalk guys mention that it's most effective to pop up your small buck decoy within 100 yards or so of a big antelope to bring him in. Popping up a Pronghorn Decoy from too far out can run them off.

Any thoughts on using a Moo Cow decoy to get within 100 yards and then coming out from behind it with a Pronghorn Decoy (using a hunting buddy to hold the cow decoy)?

My thought process is that a moo cow ambling in their direction won't alarm them and then you creep out from behind the cow decoy with a small buck decoy and the antelope thinks "oh shît, how did that little guy sneak into my territory" and confront the decoy.

Any thoughts? Or would you stick with one decoy or the other? Or just try to sneak/crawl into 100 yards and then popup a Pronghorn Decoy?

Sent from my SM-G960U1 using Tapatalk

I think I want to see a video of you trying it...

It could work but I think you are overthinking it. Use terrain, get within a reasonable distance and pop up your buck decoy. From my experience it will work about 10% of the time. Just have to catch a buck in the right mood.

Im your huckleberry. I have a Cow decoy and did the very thing your asking about several times a day on a 9 day hunt. It seemed perfect, except for the real cows. Real cows were curious and then would flip out at the decoy. I stalked several bedded goats in the middle of grazing cattle thinking this has to work only to be surrounded by cows.

I also used it when terrain didn't allow me to hide from a goat at long distance and it did allow me to close distance some but it also got their attention immediately and typically they were gone before I crested the next hill.


Moral of the story
The longer you can go unnoticed the better off you'll be.
OP
A

Appreciate the input fellas! I'm pumped to give it a shot... Or perhaps screw it up is a more appropriate choice of words

Sent from my SM-G960U1 using Tapatalk

Does anyone have success planting the decoy as a diversion, and then coming around from a different way?

I tried it a few years ago. Was more of a pain than anything, especially when windy.
R

There is no magic bean.

they do follow a daily pattern if you’re patient and get out in front of them.
J

I saw a TV hunting show once where a girl hid behind a live horse that someone else was leading. They gradually made their way into archery range of a buck she ended up shooting.

Depending upon the state, unit, and timing of your archery hunt the season may or may not be open during the antelope rut. In Wyo, prime rut often occurs during the rifle season. Bucks may not be nearly as aggressive towards a decoy until the rut kicks in. A decoy would be pretty fun when bucks are rutting hard. It would be a little spooky hiding behind a decoy during rifle season? I've almost gotten ran over a few times by bucks chasing other bucks during the rut. Pretty fun times!

I have one of the Montana cow decoys. I tried it a few years back on a Wyoming antelope hunt - the ranch I hunted on had lots of cows so figured I'd see how it went. Never really tried hard but I could walk up pretty close to antelope holding it out in front of me, some would look thinking it was kind of a weird cow but it did seem to work. 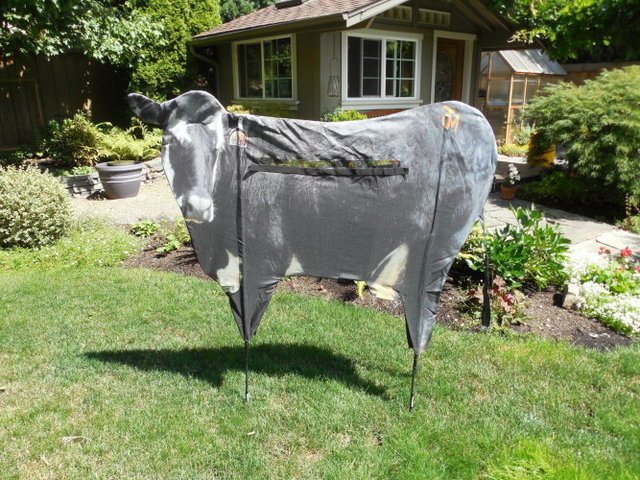 Oregonmuley said:
I have one of the Montana cow decoys. I tried it a few years back on a Wyoming antelope hunt - the ranch I hunted on had lots of cows so figured I'd see how it went. Never really tried hard but I could walk up pretty close to antelope holding it out in front of me, some would look thinking it was kind of a weird cow but it did seem to work.

Oregonmuley said:
Not really - I've loaned out out a couple times but I don't think I'd sell it since I don't think they make them anymore - plus I drew an antelope this year in Oregon so if there are any cows around I may have to use it
Click to expand...

Well it was worth a shot, I drew a pronghorn tag in New mexico this year and was thinking of using a cow decoy. Good luck on your hunt!

Thanks good luck to you as well.

I was cow decoy guy for my buddy last year on his NM archery antelope hunt. It didn’t work at all. We tried it one day and couldn’t get within 80yds before the goats split. Ended up sitting in the blind for 12 hours the following day and shooting a nice buck.

I'd be interested in selling mine. I have the Montana Decoy one as well.

ToolMann said:
I'd be interested in selling mine. I have the Montana Decoy one as well.
Click to expand...

Sent you a pm

Figured I’d chime in since I’m in Az hunting the archery hunt now.
Had a herd of buck feeding right to me yesterday but was busted by the wind at about 200 with this set up

We had a buck come in 1000 yards to an antelope decoy. It was a perfect situation where the buck went to check his territory, and when he came back there was a buck, the decoy, near his does.
You must log in or register to reply here.

To decoy or to not decoy?