I was out last weekend and had some luck with the antelope.

Trip started about 2 weeks ago on Sunday 8/14 when I started packing and pulled my tag out of the safe. I had a flight booked for the season opener of 8/18 with plans to fly home Monday 8/23. On grabbing my tag I realized that the season didn't open til 8/21!! Fortunately I was able to change my flights and the rental car prices had even gone down! So I flew out 8/21 with plans to return home on 8/28. 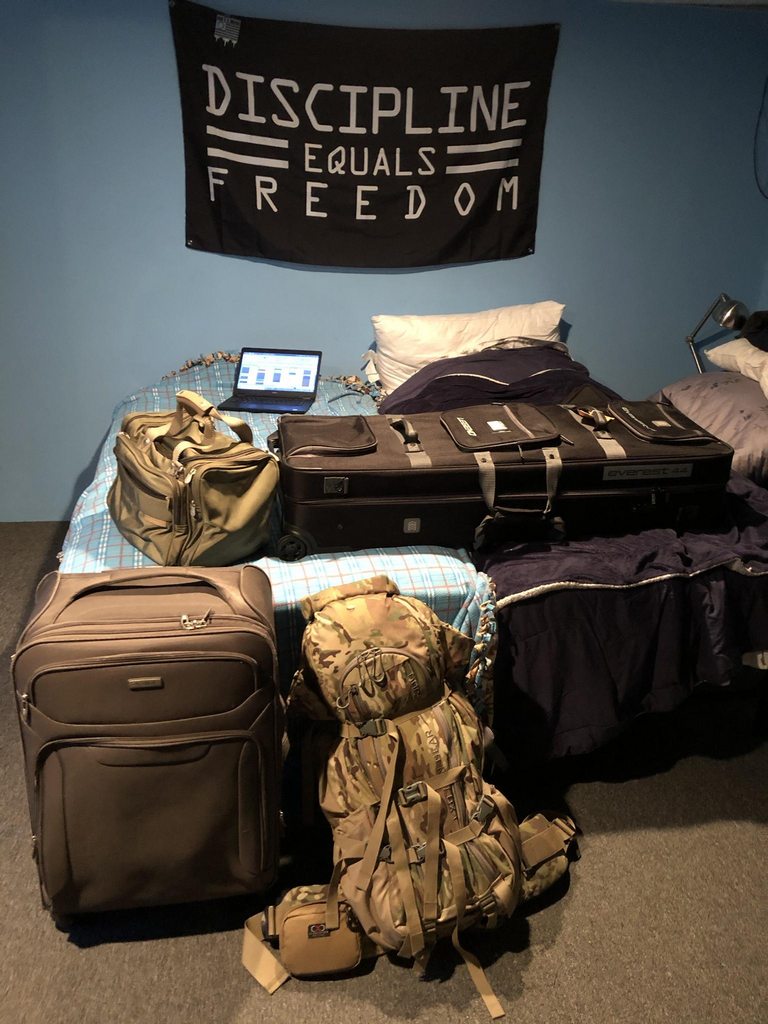 I flew in on Saturday and spent the day visiting Black Rifle Coffee HQ, grabbing lunch, groceries, fuel for the stove, etc. With severe thunderstorms forecast I checked into a hotel and got an early night sleep.

I kept my van reservation and figured I'd stick to the main roads. Since it'd dumped rain the night before I wasn't able to hit some of the smaller ones that were particularly sandy, but the gravel roads were fine. 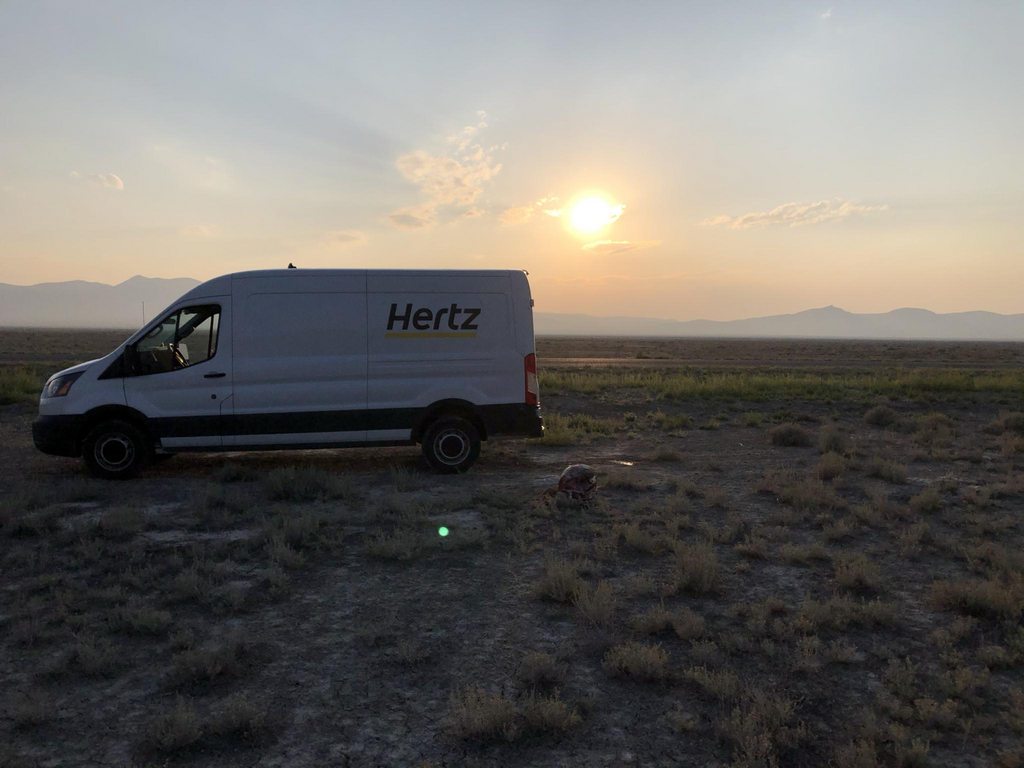 The next morning I got up and rolled out to the unit. Arriving late morning I glassed up a bedded goat with the binos and planned out a stalk. It seemed pretty straightforward so I didn't pull out the spotter to investigate further. 45 min later I arrived and found no goat but a tan/white rock. I didn't shoot it.

I drove around a bit more and after not finding any goats (or even anymore rocks that looked like goats) I got back on the hwy and moved to another main road within the unit.

Coming around a bend I saw some good terrain and stopped to glass. 200 yards away a buck stood up and walked off. I watched him head over a hill then continued along the main road to check out that area then come back after eating lunch.

I ate lunch (pre-made sandwich from Smiths), talked with some locals riding dirtbikes, and then set off to stalk that goat as he was in a good spot with some small hills. I got to where he was last seen, opened up my decoy fan (killergear antelope fan) and kind of picked my way through the hills. 1/2 mile later or so I finally found him but he was another 7-800 yards further away. Since the terrain wasn't challenging I figured I'd keep going. At about 400 yards he finally sees the decoy and started heading my way so I stopped and waited. Not seeing anything after a few min I glass again and turn him up heading the other way towards a small group. I continue the stalk but at about 300 yards bump a coyote who then ran straight to the goats and blew them out.

At that point I head back to the van and go down another main road in the unit. It's ~12PM. I spent the next 3 hours or so checking out the country, glassing up some goats that I couldn't get to, and eventually find some more to chase. I tried to approach these ones using 2 trucks leaving with 4 wheelers as cover. They continued to bump but only going 50-100 yards at a time and then pausing to watch me (wearing a be the decoy hat and holding the antelope fan this time). Eventually at 150 yards they decide I'm not actually an antelope and take off. The buck in that group was really nice though! 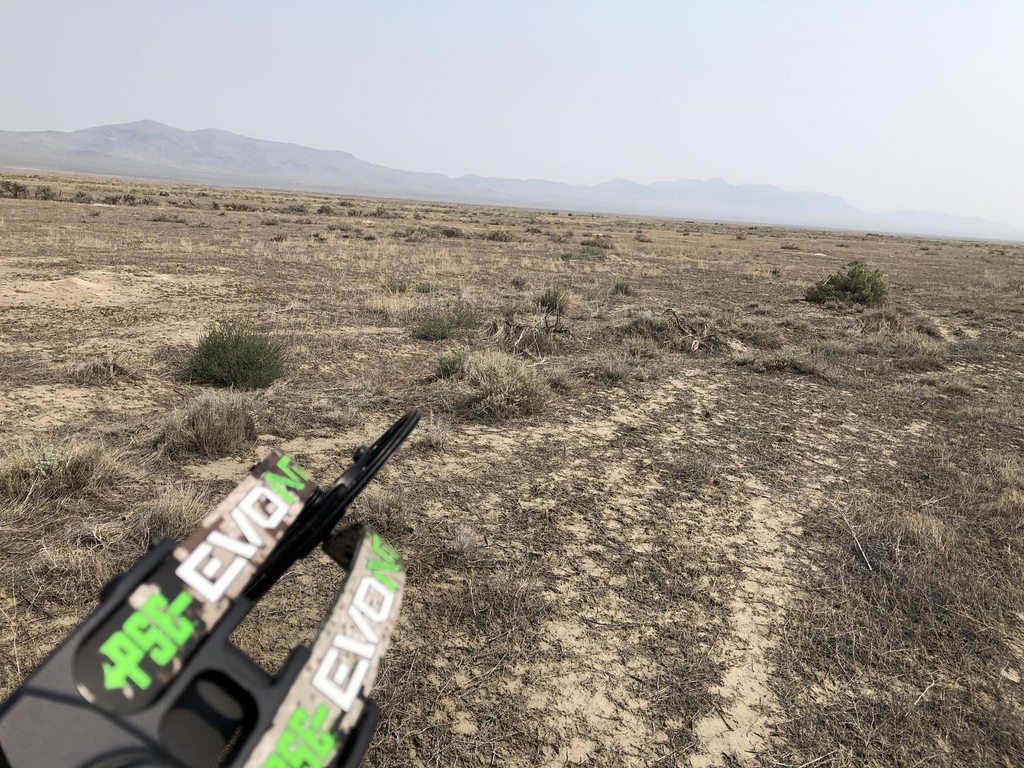 At that point I decide to go back to where I'd glassed up the bucks I couldn't get to and try to setup the decoy and then wait and see if they'd get curious and come to me. I'm about a half hour from the main road due to going slow in my van.

Finally I get back to the main road and start rolling back to where I want to setup when I spot a small group (1 buck, 2 does, and 1 fawn). Figuring I have nothing to lose I pull off and decide to try the be the decoy hat and shirt this time. This time it works and I was able to almost just walk up to 70 yards and get a shot on the buck. I hit him perfectly and he sprinted a 50 yard circle, then crashed. I could see blood pumping out of him through the binos after the shot.

My first antelope with a bow. 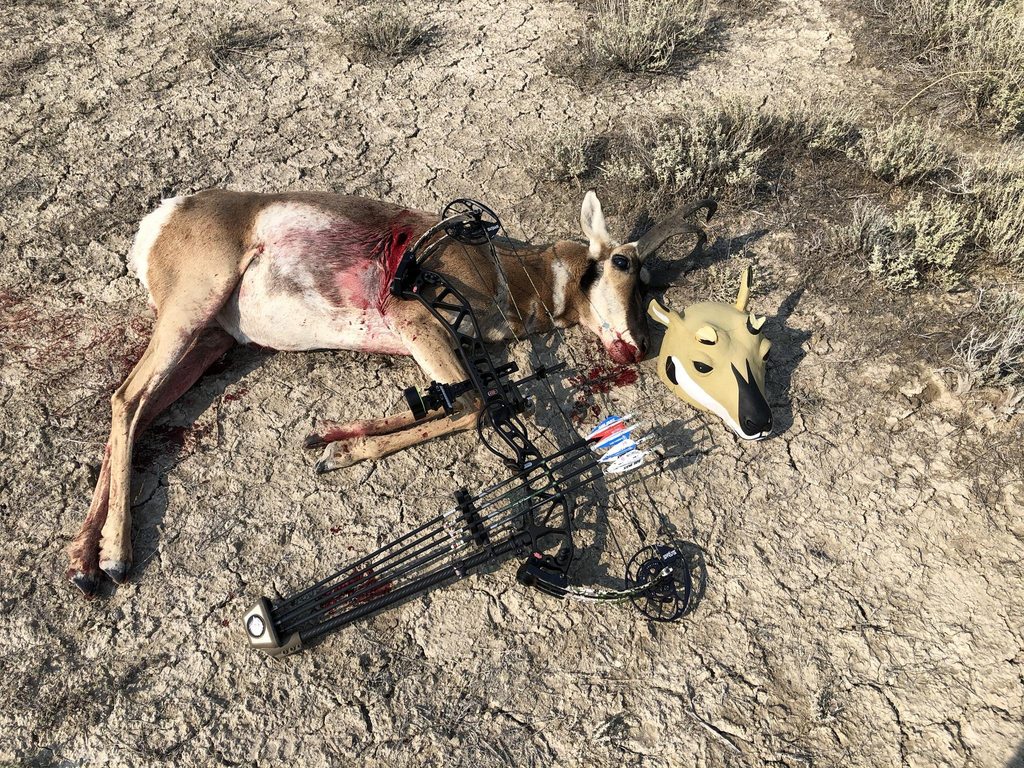 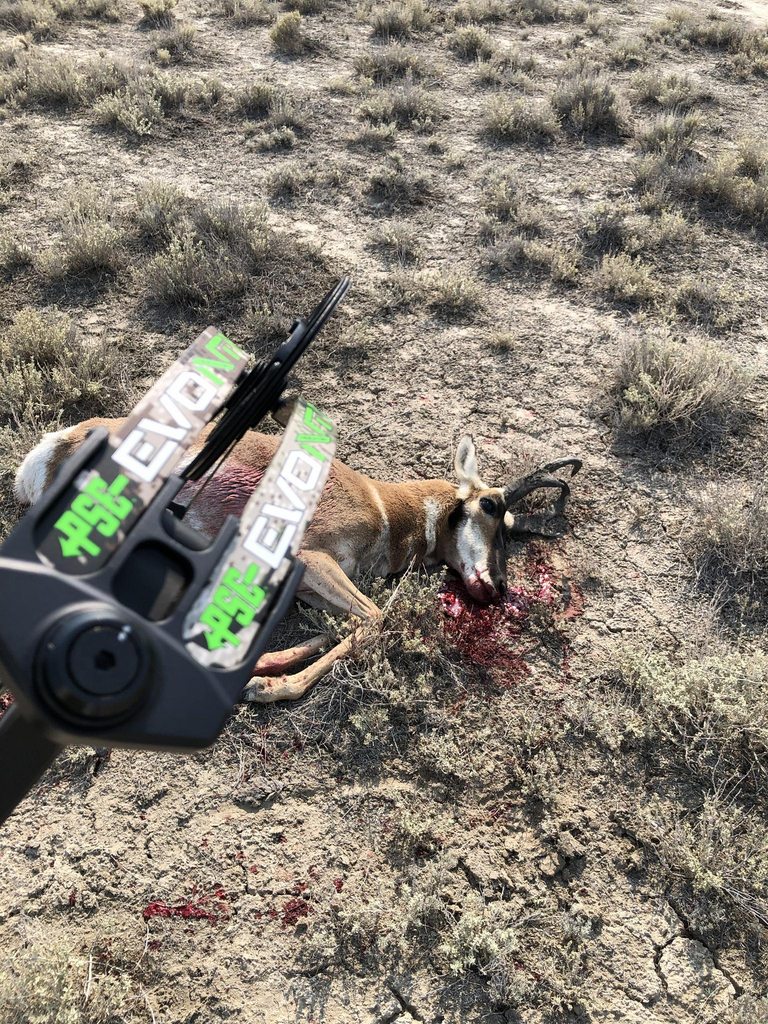 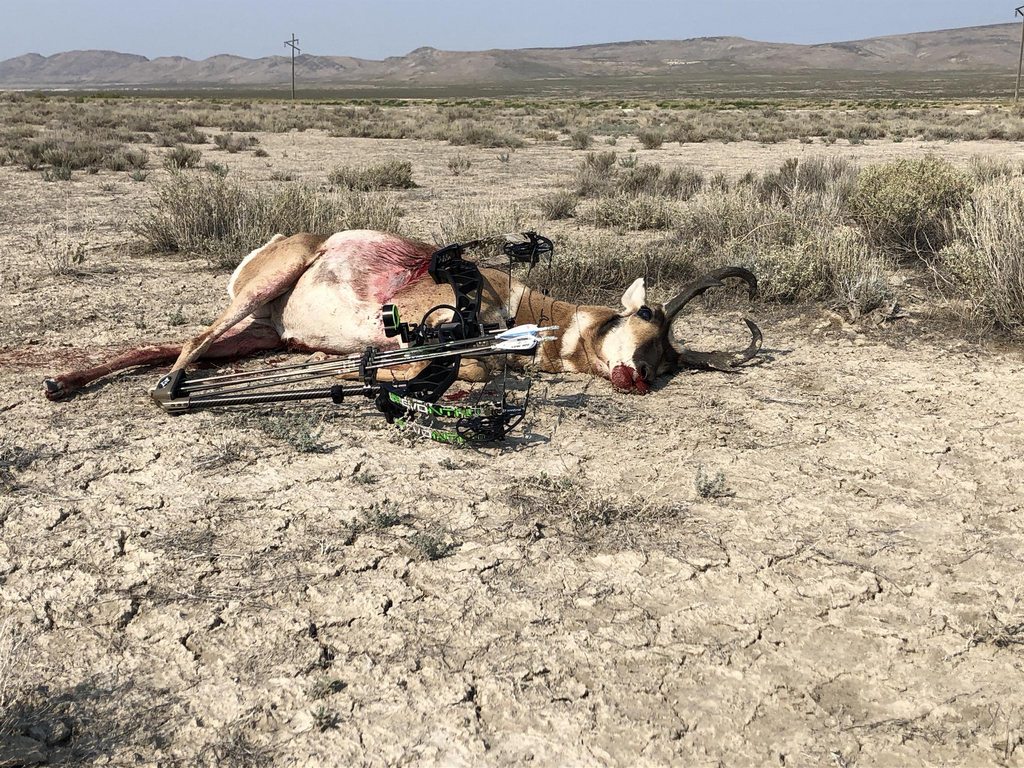 I had bought some 1/4" particle board to sleep on since the floor was ribbed (and filthy) but it came in handy for butchering. 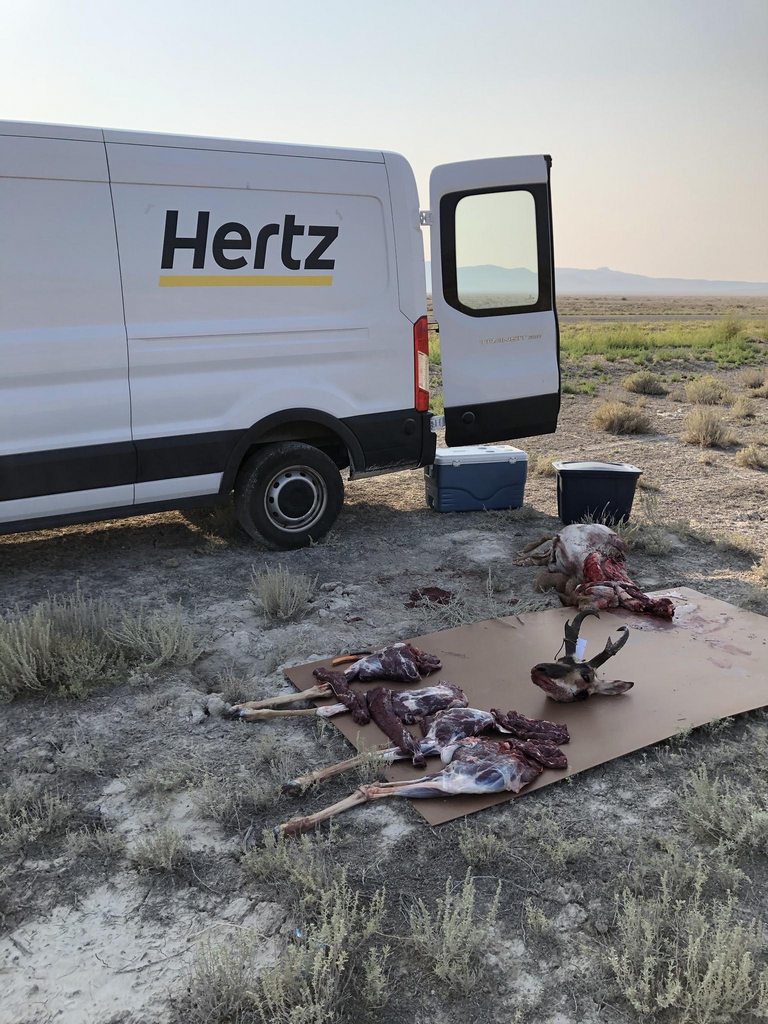 Fun hunt and nice to have some first day success! I'm far from an accomplished bowhunter (this is only my 2nd bow kill) but I was stoked with this buck.
Last edited: Aug 25, 2021

Congrats. Great story and great buck. Thanks for sharing

1 - onX kept crashing on me so I switched to using gohunt maps. I had this problem last year where onX would crash every hour or so but this time it was every time I closed the screen... gohunt worked great, even offline (although I had cell service 90% of the time).

2 - Airlines don't seem very flexible with their baggage policy regarding weight (although they do seem flexible on size). My cooler was 58lbs and I ended up paying $140 to check it as my 2nd bag. I'd shipped my other suitcase home (for $100 w/ UPS) as I thought I'd be able to check my cooler for $40 and save a few bucks. Ultimately that ended up costing me $60 more than if I'd just checked all 3 bags... Never had an issue with either of my oversize bags though at least.

3 - I flew out with no cooler and bought one there cheap from facebook marketplace. I was going to give it away if I didn't shoot anything. Now I'll probably just sell it here at home and should be able to get my $ back (so I can buy another one when I fly to WY next month).

4 - Rental agency's don't seem to take very good care of their vans as they get abused. The van was filthy so I grabbed the wood to put on the floor (floor was also ribbed). The wood came in handy at butchering time.

5 - Be the decoy hat worked for me. Had mixed results in the past (no antelope harmed) but this buck let me come up to him w/ the hat and shirt on.

6 - I did not bring an archery target so I stopped in at a local shop and checked my bow at their range post flight.

If I think of other things that I may want to reference back to I'll add them too. Trying to decide what I want to do for a rental car on my next hunt right now as I'm not flying in/out of the same location.
M

Congrats! Nice buck! Thanks for sharing!

Good work!! What unit ? I saw a big group off of the 15 freeway on the way home from Muley hunting.
OP
T

Doesn't take long to eat through one of these. Front legs are gone!

Coated w/ some olive oil, cumin, garlic, thyme, paprika, chili powder, and whatever else looked good at the time from the spice rack. Threw on the grill with some onions and tomatos in a cast iron below and slow cooked for awhile. Was thinking I'd need to throw it all in the cast iron and braise it to finish but when the meat hit 145 it was still tender so I pulled it off and ate!

Made some greek(ish) garlic yogurt sauce for the leftovers. 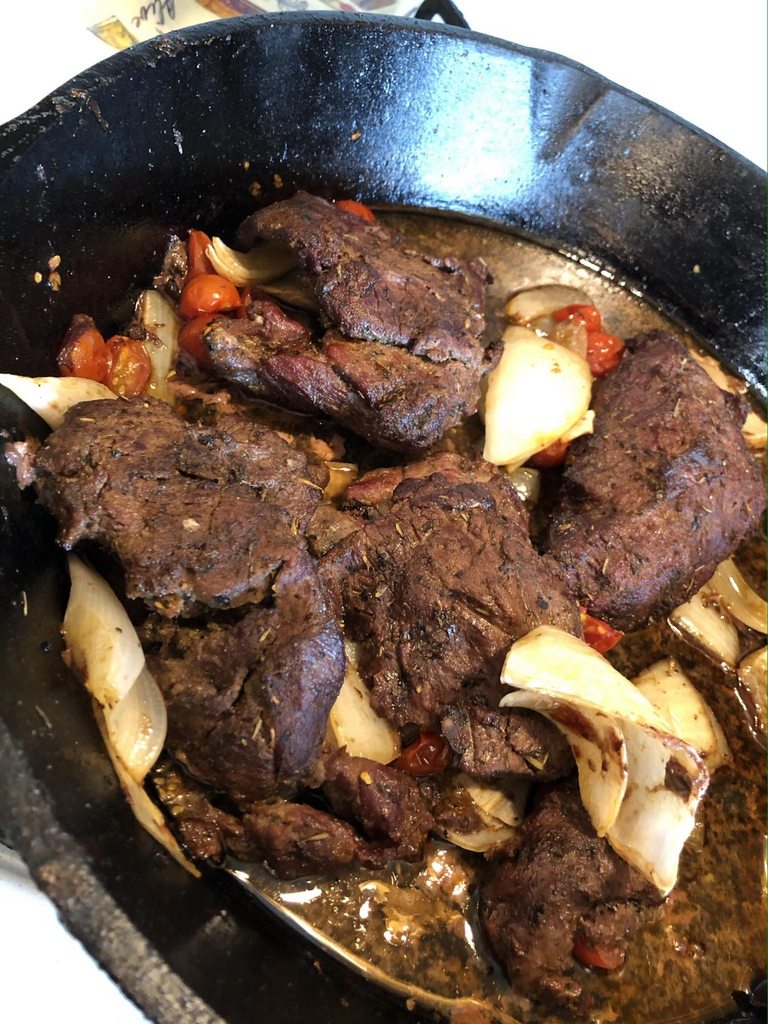 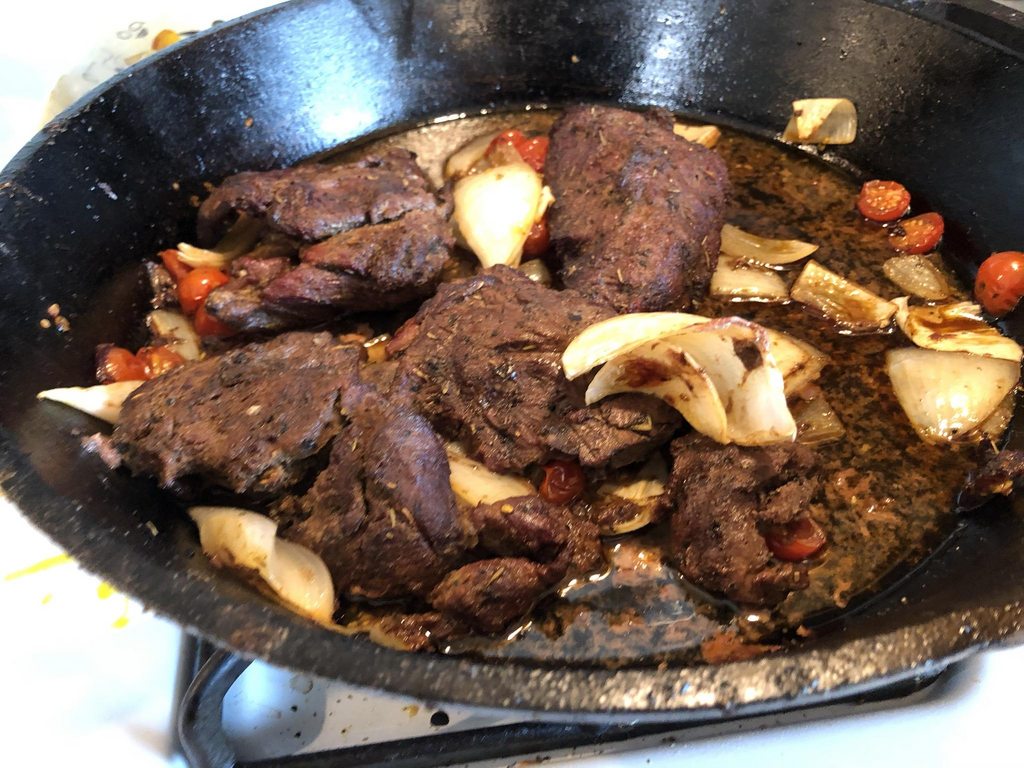 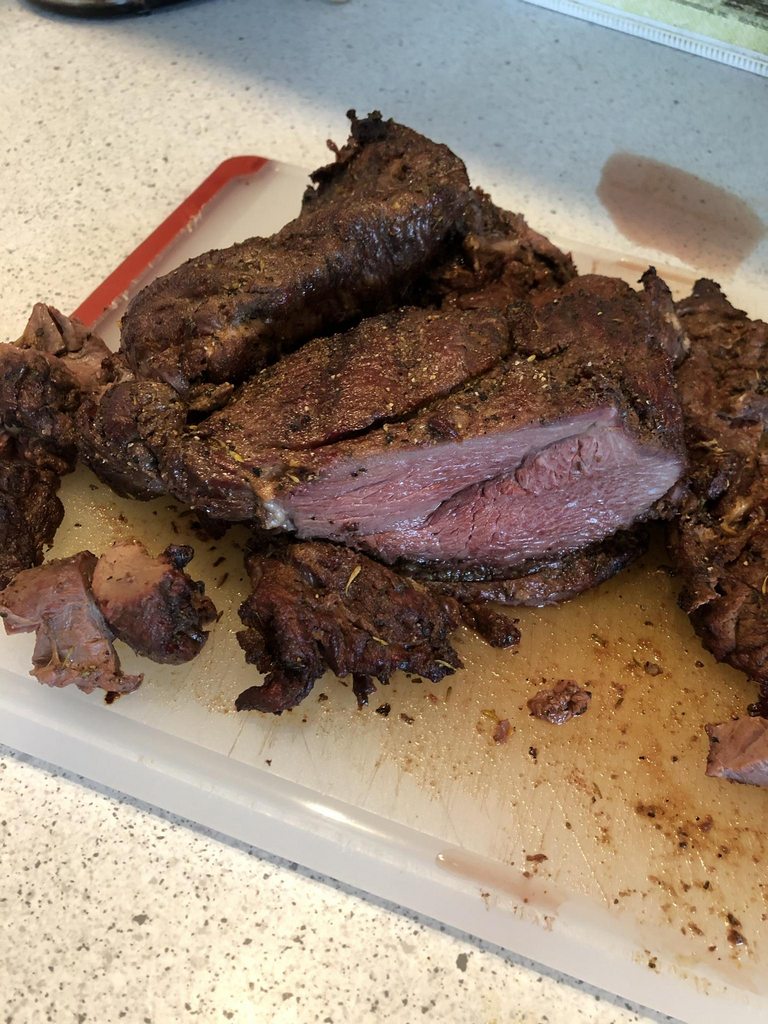 TX_Diver said:
Doesn't take long to eat through one of these. Front legs are gone!

Coated w/ some olive oil, cumin, garlic, thyme, paprika, chili powder, and whatever else looked good at the time from the spice rack. Threw on the grill with some onions and tomatos in a cast iron below and slow cooked for awhile. Was thinking I'd need to throw it all in the cast iron and braise it to finish but when the meat hit 145 it was still tender so I pulled it off and ate!

Made some greek(ish) garlic yogurt sauce for the leftovers.

What would you compare the taste of the meat too ?
OP
T

This one tastes like gyro meat a bit (which is what I was going for).

It's probably more like goat? Or maybe a sagey version of lamb? Some people don't like it but I like that each animal tastes slightly different. It's just a little stronger flavor than beef and what most people are used to.
M

Thanks for the write-up and congrats on the success! Pronghorn hunting is a blast.
B

Sorry I missed out on that meal!
You must log in or register to reply here.