Would You Take This Shot?

Ok everyone, I’ve got a multi-faceted question regarding both arrow weight and shot selection. I found this picture and wanted to get some opinions.

First some assumptions:
Let’s say you’ve got a 550 grain arrow with a fixed blade broadhead, and it's a 25 yd shot. Also assume that you either shoot now or you won’t get another chance at this elk.

I marked three areas for reference:
Red is where I would aim if using a rifle.
I think black could be a good shot if made perfectly but there is no room for error and it's also going to exit pretty far back even with a perfect shot. Also, I am counting on being able to punch through the shoulder blade.
Blue I am really not sure about, but I saw a similar discussion on a different forum saying its a good shot.

My primary questions are:
Would you take the shot, and if so, where are you aiming?
Regardless of whether you would take the shot, do you think the 550 gr. arrow would get enough penetration at the black point? What about 450gr?
Is there any arrow set up for which red would be a viable aiming point? The Ashby reports (that I’ve seen some mention of on here) indicate 650 gr. arrows as being the “bone crushing threshold” and also advise a single bevel head. Don’t think I would trust it for this shot though. Nah, That bull is not big enough. Id let him pass.

If it was close enough I’d be all over that blue are.

That black dot would be your only chance with a bow. the blue dot would be way to far forward maybe clips a lung I highly doubt you ever see that bull again

Of those colors - black dot only 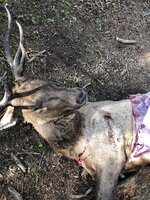 I would choose black.

If it was quartered to more than I would do the frontal, but there's plenty of room for the black.

Seems like black will miss shoulder blade and hit at least one lung, maybe two, plus liver and put a hole in the diaphragm.

Black for me. That looks like it’s in the meat section of the shoulder. Behind the humorous and below the blade

my drawing is far from perfect but best I can do on phone. But that’s generally where I’m seeing the bone. 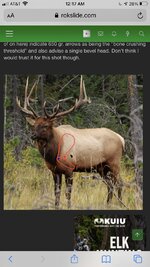 Ive killed a couple shooting a tad higher than the Blue dot in through the hole in the skeleton from that angle. Big bundle of important arteries there and lungs inside of course with no bones to shoot through.

Ive shot 5 straight on frontal, same thing a tad higher than is intuitive. One in particular had the arrow poking just under the hide in the rear ham....6’ of arrow penetration....and none of them went 30 yds. It has to be close enough shot they cant move and screw up your shot location.

How many elk has he killed exactly?
Has anyone actually seen photo evidence of anything Ashby has shot? . His EFOC theories he developed with straws and rubber bands got laughed out of existence by the Physics guys years ago.
See if you can dig up any actual proof- in 25 yrs Ive never seen it.


Ashby is the Bernie Madoff of Bowhunting. for a guy that supposedly shot hundreds and hundreds of animals (alive/dead) why has nobody ever seen a photo of an arrow in one?

Black only for me from that angle.

The rest of your question is loaded, there are too many variables just to base an answer on arrow weight. Setup, tune, speed, draw weight.... all go into the equation. I would never intentionally shoot an elk in the shoulder blade no matter the situation. You build the best setup you can in my opinion to account for error if it were to occur. Then do everything in your power to make sure you do your part when the time comes. That to me means avoiding the shoulder blade

Between the blue dot and the throat...it dies.

The black dot is an easy choice. There’s still a lot of lung behind and above that. It’s really not very close to shoulder bones.

I did deflect off a tree and hit one where the blue dot is last year. It worked but there’s also a lot of bone that could get in the way. You would also be counting on hitting vessels and there are plenty of gaps between those. It’s not a sure thing.

FWIW, I shot a 500 grain arrow going 290fps with a 3-blade broadhead through both shoulder blades a couple years ago. Complete pass through. Not a good shot but it opened my eyes to the fact that an arrow can make it through elk shoulder blades without issue. I wouldn’t bet on making it through round bones on the red and blue dots though.

Black brings one more thing to the table, he's going to run and that is going to cut the hell out of him if it didn't pass through.....and if it did....it matters not.

Black also cuts slack on you being busted. He's not likely to run to you but highly likely to spin away while rearing back.

I shot the bull in my avatar at that angle with a GR Fatal Steel at 30 yards, I aimed about an inch higher than the black and about an inch left of it.......except on the bull's right side. It blew through part of the shoulder blade, and the bull went down in under 3 seconds.

Black but only if he was pretty close.
S

Nope- I wouldn't take that shot. If it was a little more towards broadside, I'd take it. If it was a little more facing me, I'd take it. To me that's the perfect angle for problems to happen. If you shoot behind the shoulder you have a very good chance for one lung. If you shoot in front of the shoulder it's a small window and poor angle. Others will differ in their opinion, but that's mine.

One important thought-- it's ok to not shoot! Not every angle and chance at an animal offers a good/smart/ethical shot. It's the internet, so folks will differ in their opinion of what that is, but it's important to know that sometimes you just don't get a great angle to take a shot. Since frontal shots became "all the rage" it seems there is no angle people won't send an arrow at. To me, the pic above is an example of "no man's land", in terms of being in between a frontal shot (which I'm absolutely not opposed to BTW) and a broadside shot. Be patient in that scenario and you'll likely get a better opportunity.
C

Many of you have chimed in about killing your elk in the blue area but not many have weighed in on the elk they lost. I am zero for One on the blue shot and that was 20 years ago. Consequently, I have never taken that shot again even though I have had similar opportunities.
B

I'm with Scoot on this. I'd pass the shot and hope he'd give me a better broadside. Too many elk don't get recovered every year from hunters taking risky shots. Gotta do your diligence to allow the animal the respect it deserves; taking risky shots isn't part of what an ethical hunter does in a moment of excitement.

ALWAYS look at where the exit is going to be. Then consider whether you'd take that same arrow path shot from the other side. And yes, I always do that even at the moment of the shot.
You must log in or register to reply here.