My brother and I headed west for our first DIY Western hunting trip and just got back home today. We had a great time hunting Unit 26, North of Douglas.

We camped on BLM land and were fortunate enough to kill two bucks on opening day. There were hundreds of other hunters hunting the same 10 miles stretch of road that had broken parcels of BLM and state ground on it. Within the first 5 minutes of shooting light I was able to see 6 other hunters within 1000 yards of me. After having a few bucks bumped away from us by other hunters we were able to get on a few goats within eye sight of our camp that evening. I had already killed an antelope a few years ago, but it wasn’t the true experience I was wanting (get out of truck, shoot goat, go home). For this reason, I let my brother shoot first on a really nice wide buck and he made a great shot at 400 yards with his 300 Weatherby Mark V. This was really special because this is the rifle that our uncle took on all of his western hunts and he killed an antelope with that rifle on the same day in 1986. We spooked the buck making our first stalk, but we’re able to get back on him and he
presented a perfect broadside shot. The antelope fell where he stood and we immediately started skinning and getting the meat on ice as it was about 85 degrees out. My brother took his jacket off and the black shirt didn’t help picture quality, but it was a dandy first antelope. He dropped it off at a taxidermist in Douglas for a shoulder mount

Later that evening I resumed my hunt. As you can all tell, I was not nearly as picky on my buck. With the hoards of hunters on the roads it was evident that bucks were already being pushed to private land within the first few hours of opening day. I spotted my buck about 800 yards from camp and took off after him. I was able to sneak to just below the buck at around 100 yards, but I did not feel comfortable taking the shot as there was not a back stop behind him and with the hoard of hunters walking around I knew it was not a good idea to send a bullet off into the wide open area we were hunting. The buck saw me at this point and took off to the next ridge. I followed him and was able to get a safe shot on him at 200 yards. I heard the round impact and he took about 3 steps and fell over.

We were both shooting 168 grain TTSX bullets hovering right around 3350 FPS out of our Weatherby’s. The bullets performed well and caused minimal meat damage considering we were using what most would consider overkill on lopes’. This was also our first time using our handloads on a game animal so that was pretty neat.

After we tagged out we headed down to Colorado to trout fish for a couple days after dropping our quarters off at a meat locker to be frozen. Just an FYI to anyone hunting the Wyoming or Colorado area, there is a massive shortage of dry ice so plan accordingly.

A couple of the images came out a little blurry because I had to resize them, but hopefully you can still view them.

Thank you to all the great Rokslider’s for advice on how to go about planning our first DIY trip out West! We had a fantastic time filling our tags even if it was in a tougher unit with less trophy opportunities and tons of hunters. My advice would be to definitely not go on opening weekend and let the crowds of hunters disperse. 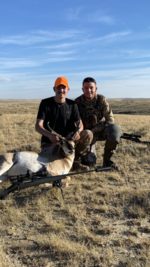 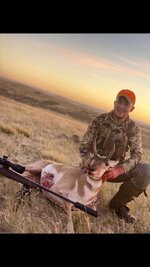 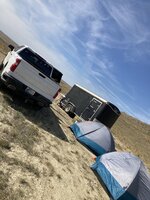 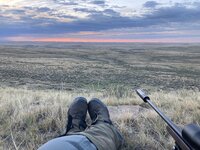 Congrats on a successful cast n blast! Those are my favorite.

Looks like a pretty great trip. Congrats to you both.
M

Thank you all! It was a great experience. We’re already trying to figure out what we’re doing next year for a hunt. We’re thinking Colorado or Montana mule deer.
T

Congrats. 26 is a great antelope area and they taste amazing!
T

good work! The high hunting pressure is the norm in the low point units, especially opening weekend. Doesnt mean you cant get on them as you guys did! Dont let it get you upset and do the best you can to adapt and overcome
O

Sounds like a great trip thanks for sharing
N

Congrats on a successful hunt!
L

Great write up- my son and I are headed there tomorrow for our first hunting trip out west. Hopefully we find a couple still hanging out
M

lawndart said:
Great write up- my son and I are headed there tomorrow for our first hunting trip out west. Hopefully we find a couple still hanging out
Click to expand...

Good luck! Talked to a guy last week staying at the same hotel I was at that took an 84” out of 26 last year. 2nd biggest WYOGA Antelope from 2020.
L

Looks like you guys had an awesome trip. Congrats on the success!
OP

lawndart said:
Great write up- my son and I are headed there tomorrow for our first hunting trip out west. Hopefully we find a couple still hanging out
Click to expand...

Thank you and good luck! Let us know how you do. Everyone I spoke to regarding when to go said to go the middle or last week of season, but my work schedule wouldn’t allow that.

aOWENc said:
but I did not feel comfortable taking the shot as there was not a back stop behind him and with the hoard of hunters walking around I knew it was not a good idea to send a bullet off into the wide open area we were hunting.
Click to expand...

Dude...you get MAD respect for this statement alone! I can't tell you how many bullets I've heard whizzing by me on opening day for antelope!
OP

bsnedeker said:
Dude...you get MAD respect for this statement alone! I can't tell you how many bullets I've heard whizzing by me on opening day for antelope!
Click to expand...

Thank you! It’s amazing how quickly firearm safety rules fly out of the window for some people when they are staring down an animal.
P

Congrats on the success! Looks ands sounds like a good time was had.

I was there a few years back and I’m ready to return next year. It should be a yearly hunt it’s so much fun.