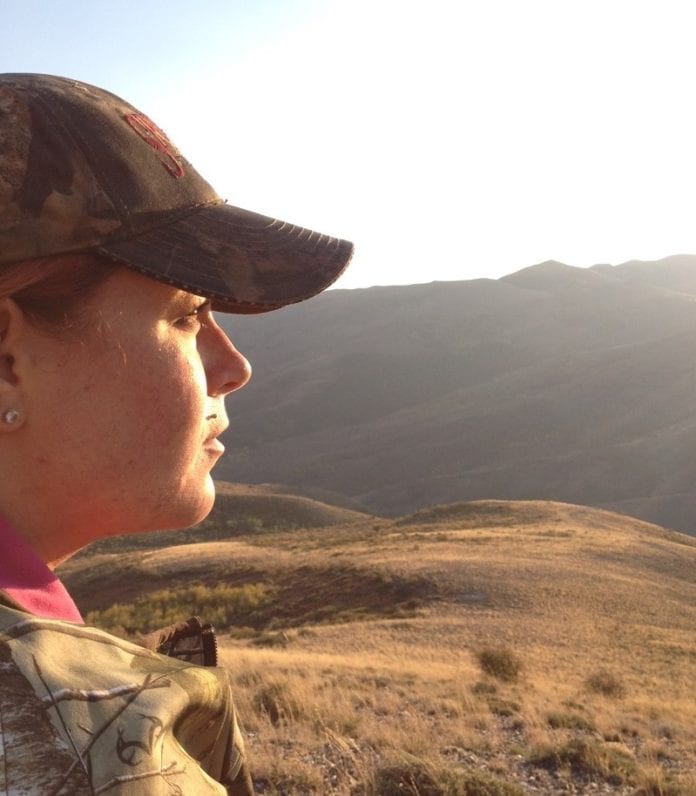 While this is my personal blog space where I mostly publish tips/tactics/gear reviews/news related to mule deer, today I’m going to divert–and for good reason.

One of our members, Mac87toy, has been quietly defending our freedoms around the world over the years.  When he told me just how inspiring and helpful our Rokslide Live Hunts were to him during deployment, I asked for a story on his wife’s Idaho moose hunt.

Mac87toy, I hope seeing your wife in action on her own “Live Hunt” makes defending our freedoms just a bit easier. Thanks Soldier! 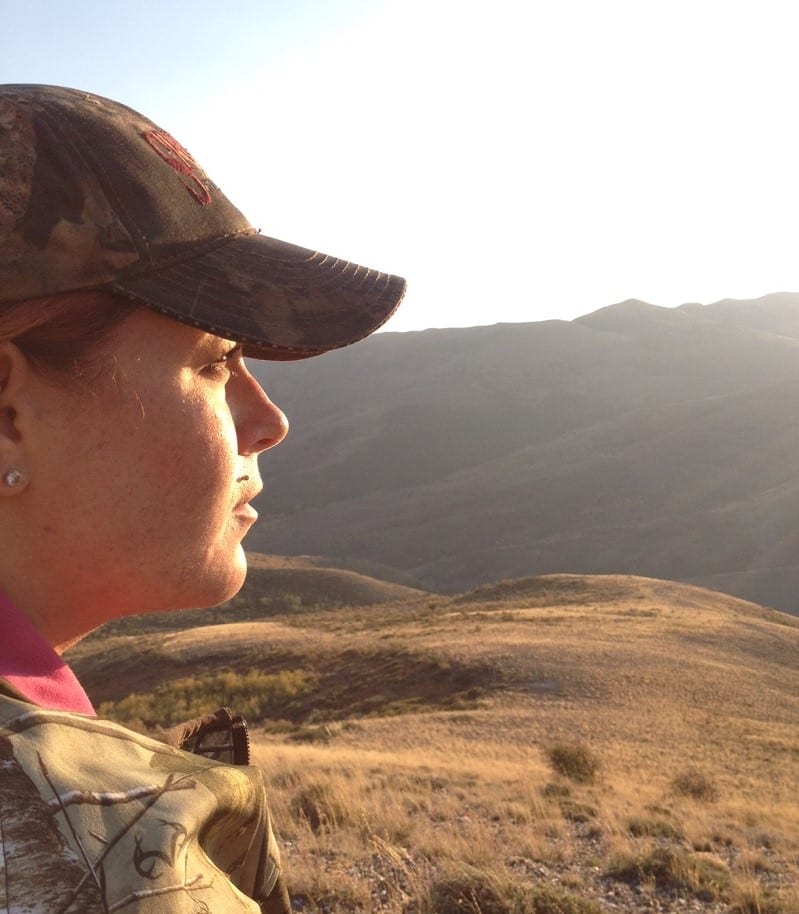 This is what a hunt is all about.  Lots of glassing, TONS of patience, and lots of climbing.

Earlier that year my wife, Molly, had drawn a once-in-a-lifetime Idaho moose tag in a unit that no one had said anything about except a long time friend.  He has never sent me in the wrong direction before, so I went with my gut and applied Molly for a tag.  To our surprise, she drew! 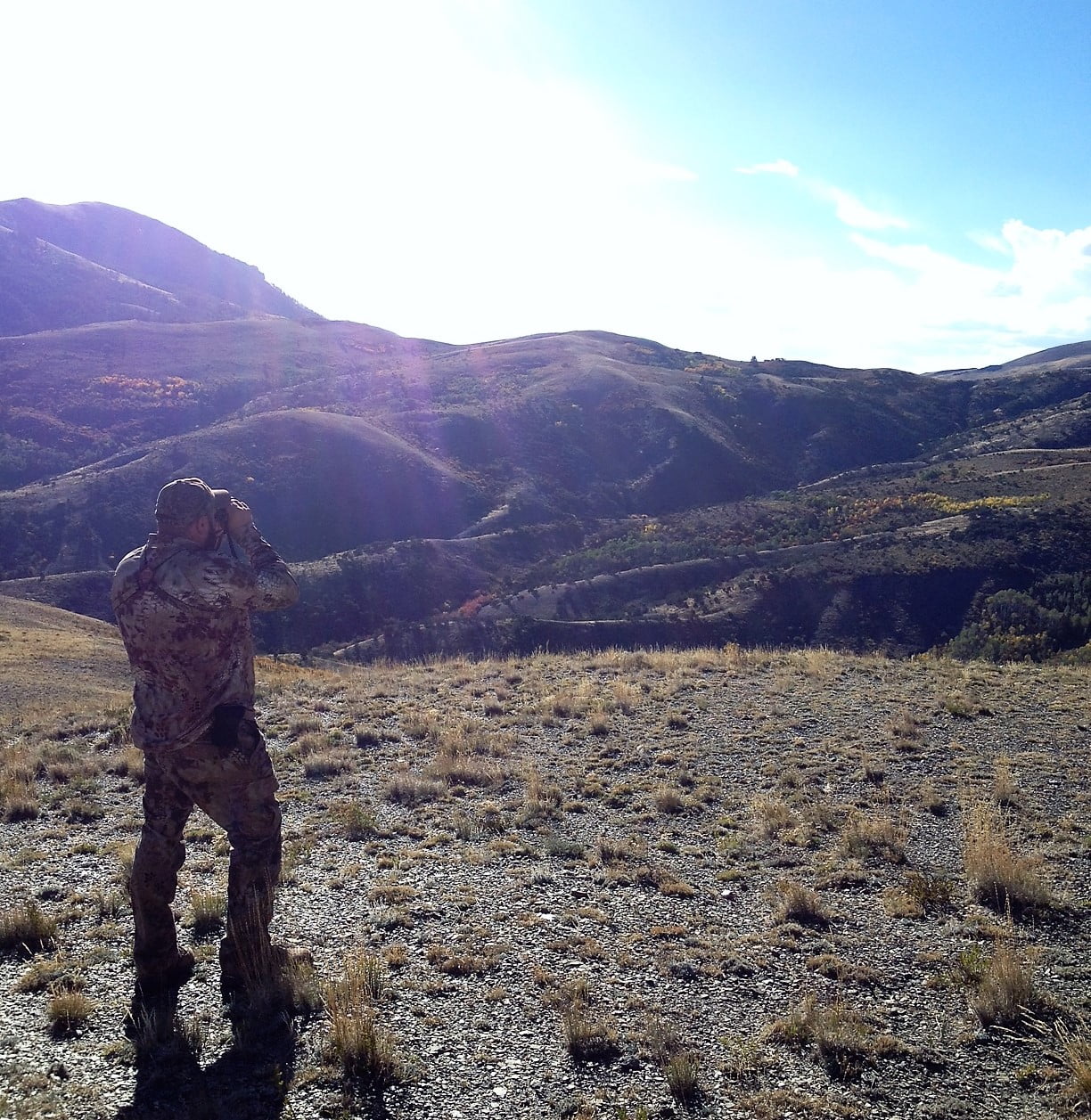 Now it was five months later and the hunt was open.  The dawn found us glassing when, around 8:00 AM, we spot a great moose in a great spot to get close to.  We move in and he is full rutted up.  I threw some grunts his way and he was ready to fight.  He stepped out at 200 yards and was as big as a house!  My wife is usually a phenomenal shot, way better than I am.  She got the rifle on the bull, and when she had a clear shot, the bullet was on it’s way.  After a couple follow up shots, the bull was still on his feet and moving well.  We were very perplexed. We tracked and looked for blood and after about five hours, never found any, but we did find a rusty old horseshoe.

Faithful to the cause, but pretty down, we came back that evening to make sure we hadn’t missed a clue.  To our disbelief, we glassed the bull we just knew was dead climbing out the top of the drainage.  We were relieved to see him up and moving and uninjured, but we figured he was walking out of our lives forever. 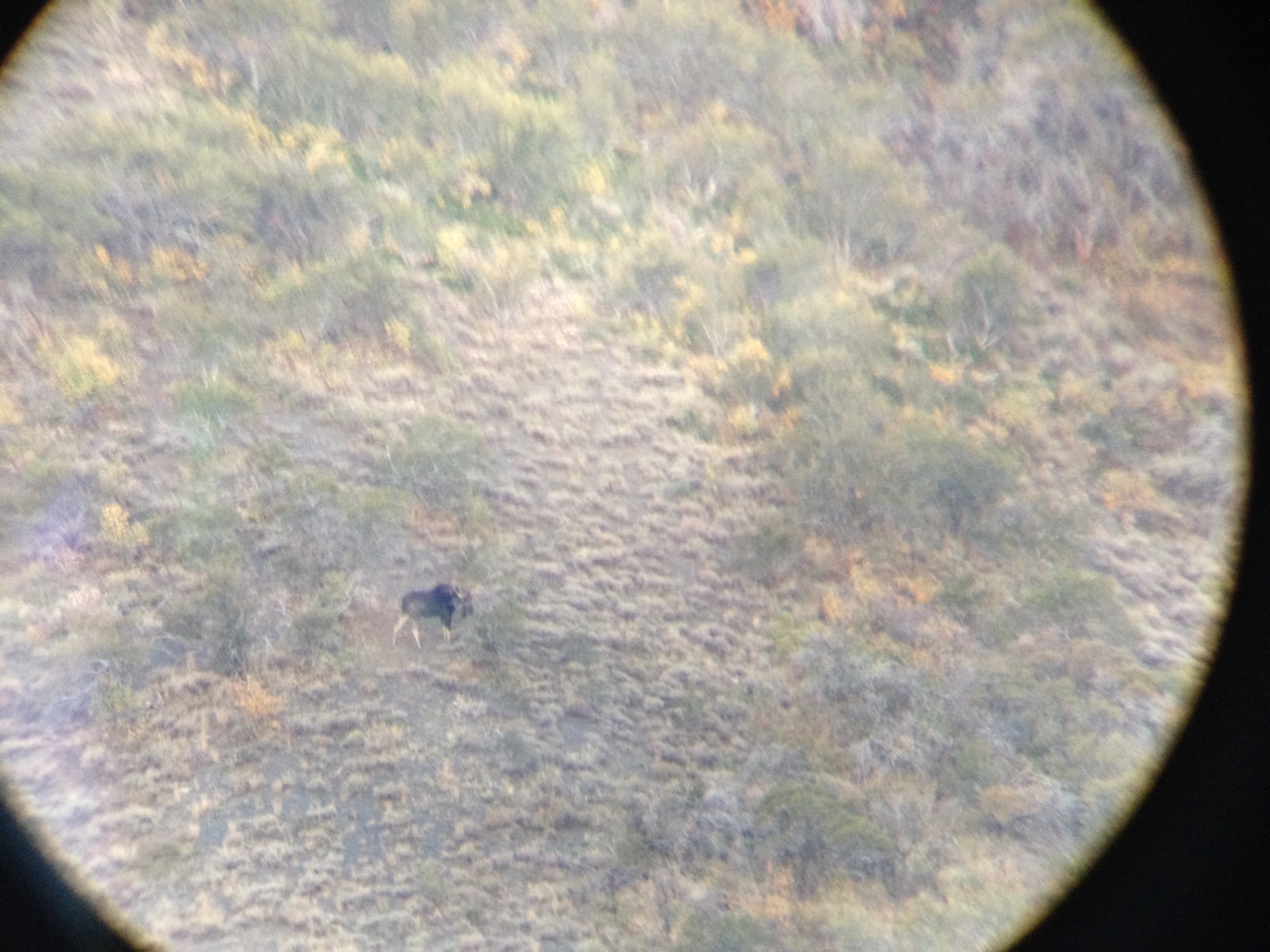 That night we were in the lowest of lows and decided that we would go out the next morning and look for a moose in a lower part of the drainage for the morning hunt.  The sun rose to a beautiful Southern Idaho morning and we started spotting cow moose and their calves.  Up to this point, we had hardly seen any cows. We watched one cow up in an aspen patch for about two hours, all the while thinking it was awfully weird there wasn’t a bull with her.  After a while of nothing new, we pretty much had tossed in the towel. Suddenly, my buddy looked back at the cow and there was Molly’s moose from the day before!  He was hot on that cow’s trail.  We were off and running!

We made the bottom of the canyon and started climbing the 700 vertical feet back up to his level.  I forgot to mention that my wife was just seven weeks post-delivery, so she had to take it a little easy.  Luckily, she’s a hard charger and we made short work of the climb and the mile walk.

Once we got to where we thought they were, there were no moose in sight.  My buddy, still back on the glass, signaled us to head into the choking brush nearby.  After about 50 yards, I was starting to think the bull was gone when my wife very excitedly said,

And he was RIGHT THERE!  30 yards away, standing under a Juniper.  As soon as he saw us, he grunted and started wracking that poor tree.  She put a perfect shot into him and he wheeled around and disappeared.  After about 10 minutes of not hearing anything, I went to look for blood.  As I approached the Juniper, I can’t see any blood.  That sinking feeling started to creep in, but then I hear him and he’s close!  I look to see him coming fast, ears laid back and headed for us!  Thanks to a Higher Power, he couldn’t push through the heavy brush and stopped just seven yards away.  After I got Molly calmed and back on the rifle, she put a second shot right in the pump house to finish the deal. 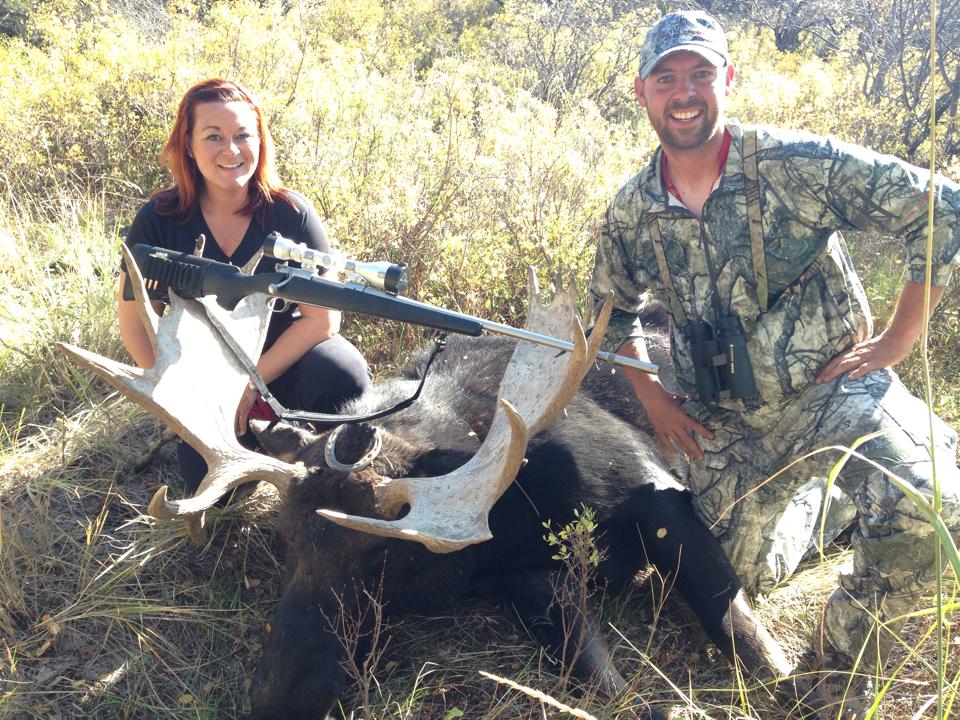 What a hunt!  After looking over pictures, we confirmed that is was the bull she’d missed the day prior. The horse shoe we found while tracking the day before must have been lucky.  I was so proud of my amazing wife and her hard earned moose. 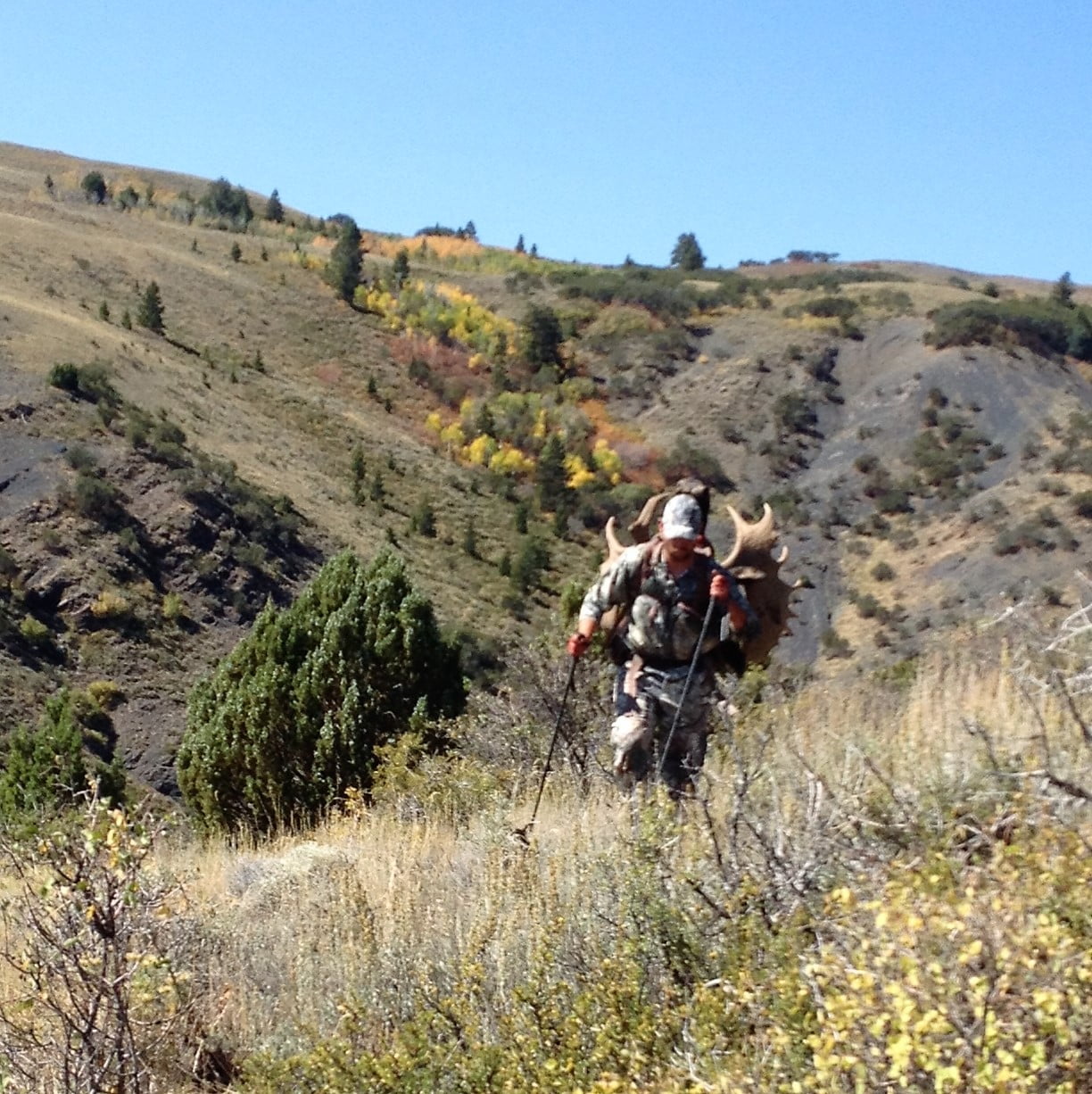 I had followed the Rokslide Live Hunt Forum for two years prior to this hunt.  While I was deployed in the desert, those live hunts were all I had to look forward to.  I can’t thank Robby and Rokslide enough for all the tips and tactics passed along.  I know they helped us tag out on Molly’s Moose. 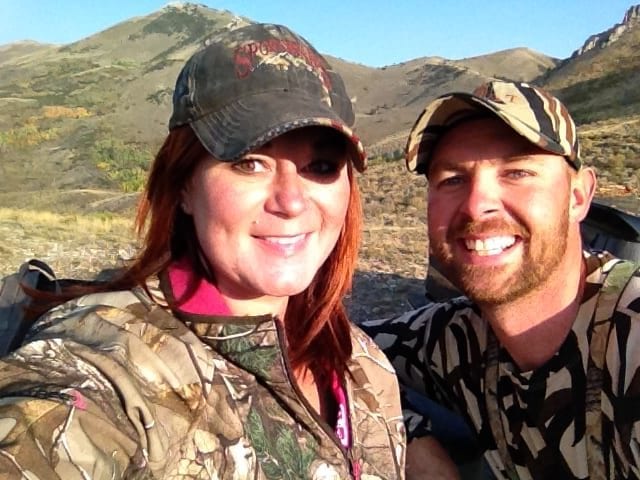 Application Strategy: Get Off the Declining Odds Treadmill