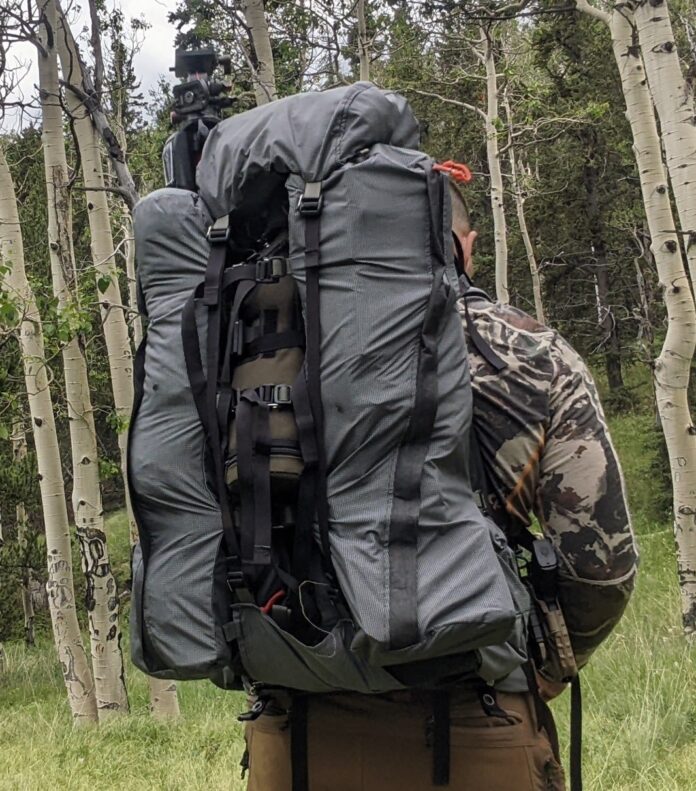 2022 saw Seek Outside bringing a full backpack product line change in material From X-Pac to UltraPE 400. More on this very new material later.  During this revamping of the backpack product line, the standard offerings were streamlined, and the Brooks/Saker-style packs were eliminated.  The unique feature of the Brooks and Saker was the full height right and left zippered 1250ci pockets that afforded the user versatile “modes.”  One pack could be used for daypack simplicity, expedition trip capacity, to an efficient hauler using the pockets to wrap the load like a mother bird’s wings over her offspring.

Having been a dedicated Saker fan since its introduction in 2018, I was bummed to find out that the design would not be offered any longer.  My sadness was only temporary, however, when I learned that Seek Outside believed they had a solution by creating the Wingspan Pockets found here.  I was elated to learn that the Wingspan pockets were being made from SpectraGridHT, but I was skeptical and curious that they would be separate modular attachments.  So, I set about procuring a set of Wingspan Pockets to find out if they were functionally worse, equivalent, or better than the prior Brooks/Saker configuration.  I ultimately ended up with a Revolution framed Goshawk 4800 with side zip, Merlin, top lid, and load shelf (standard inclusion with the Goshawk). 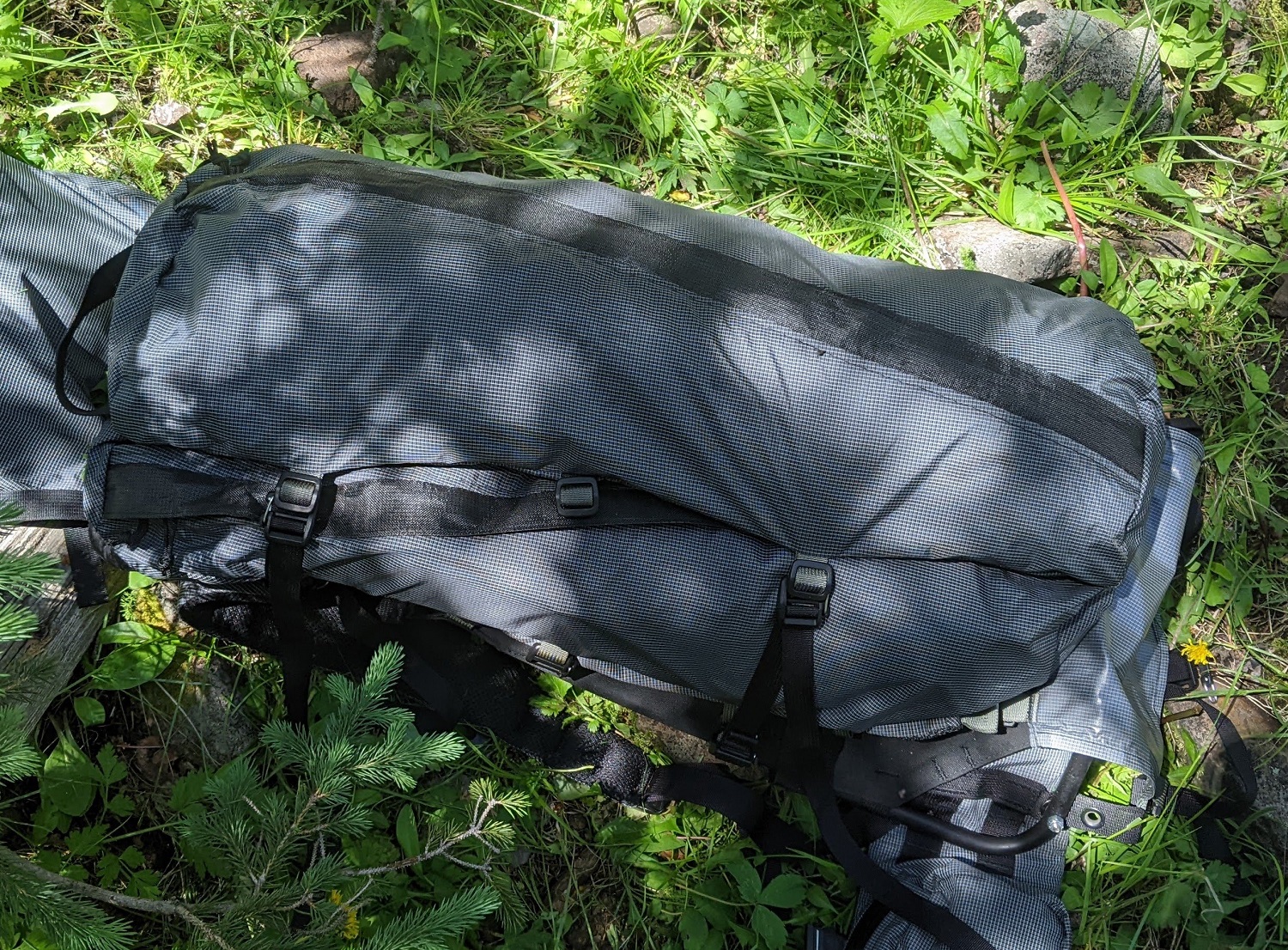 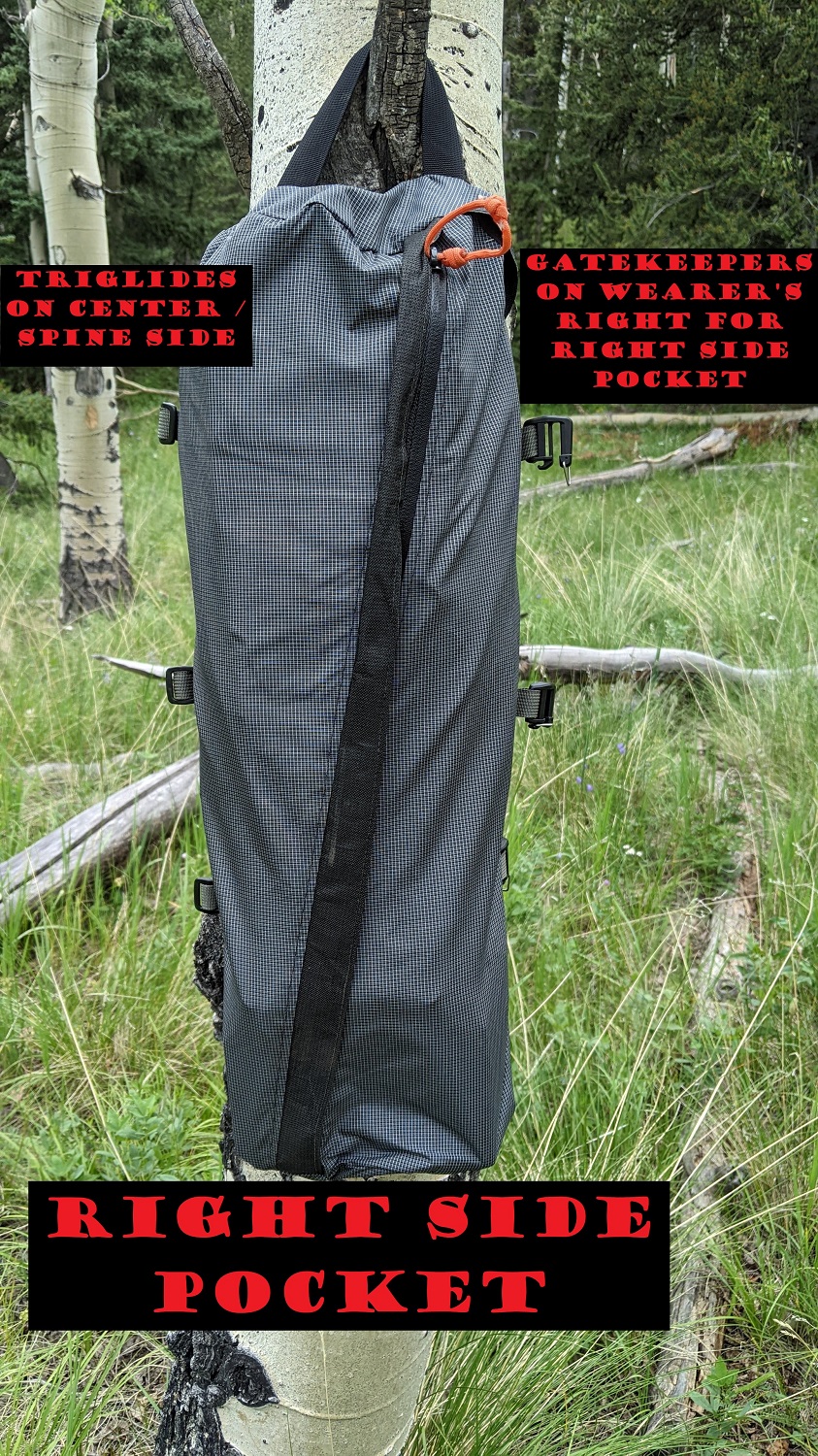 *Seek Outside reports they used ping pong balls to determine volume.  The method of sewing allows the pocket to expand from a “D” to a near “O”, and I believe that the reported volume is accurate, even though a “D” shaped cylinder would be roughly half the volume of an ”O” shaped cylinder of equal length and radius.

In talking with Kevin and Lee at Seek Outside about what they wished to accomplish with the design of the Wingspan Pockets, the apparent theme was versatility.  These are targeted at the user who, much like myself, might have needs from spartan meat hauling uses to pack in hunts over a few days.  So, I have tried to use the Wingspan pockets during summer scouting in different configurations.

For trail camera season, it seemed that the Wingspan Pocket was tailor-made for the cameras I have.  Surprisingly, I was able to fit five cameras in one Wingspan, some in security boxes with security cables.  The modularity afforded me to stash my laptop, and an auxiliary charger in the Merlin against the frame, an insulating layer and water bladder and “survival kit” in one Wingspan pulled over the Merlin, trail cameras and cables in the other Wingspan pulled over the first Wingspan, rain gear and snacks in the lid connected to the load shelf coming from the bottom of the frame to further compress and stabilize the load. 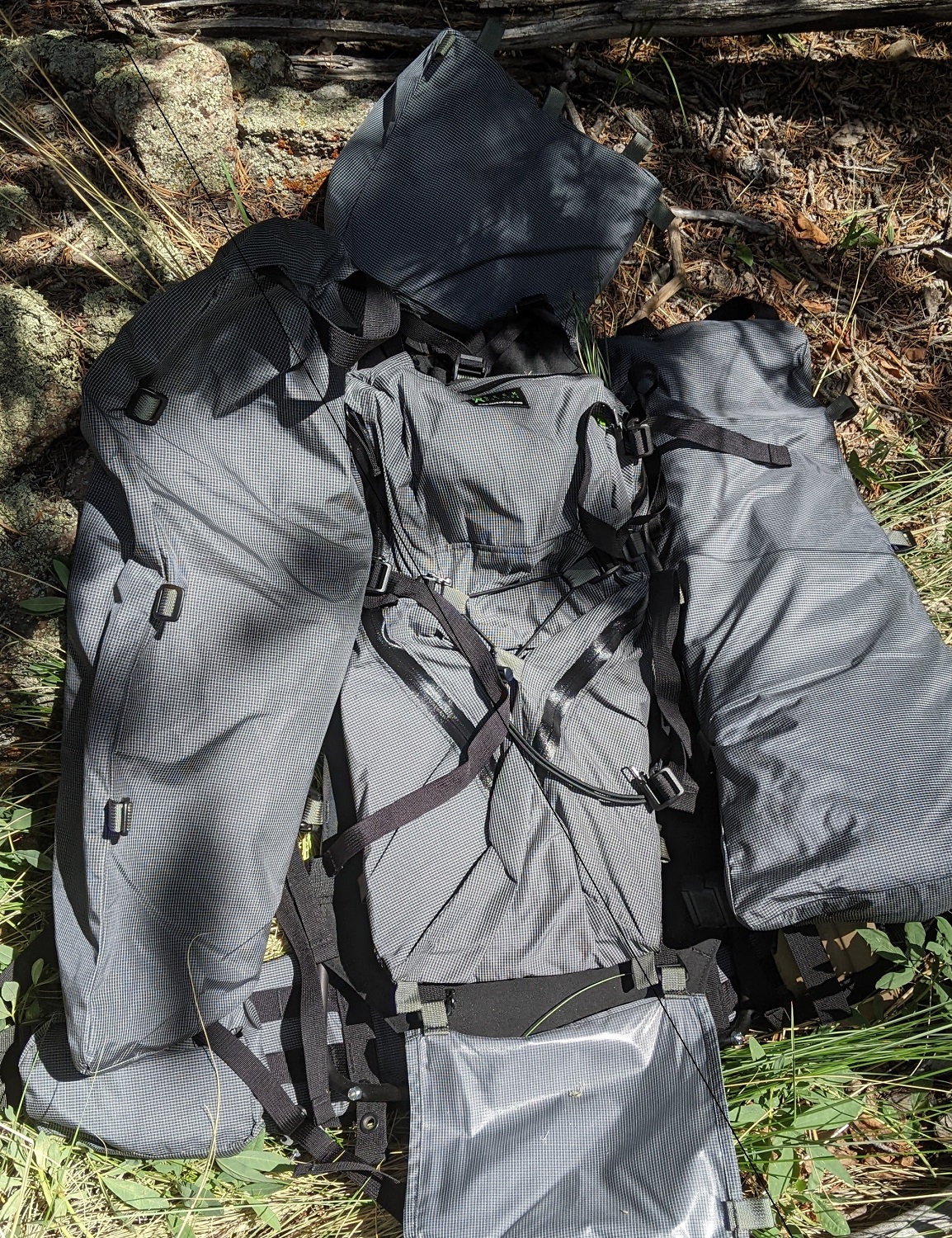 Secure With No Shifting

One thing I was curious about was if the functionality of the Goshawk’s open top side pockets would be eliminated with the Wingspan pockets connected.  I could envision myself stashing my trekking poles, long Spartan bipod, maybe a puffy jacket or other thin items in the Goshawk’s side pockets, and it worked out just fine that way.

To see what could and could not be packed, I filled the Goshawk with a typical couple night load and a few pairs of boots to fill it up, put my gaudy Manfrotto 055 tripod in one of its side pockets, and some trekking poles in the other side pocket and threw on both fully loaded Wingspan Pockets.  For good measure, I packed a Kowa 884 on the centerline of the Goshawk like the meat of a taco with the Wingspans playing the role of the taco shell.  Everything went flawlessly for the walk to my glassing point and back. 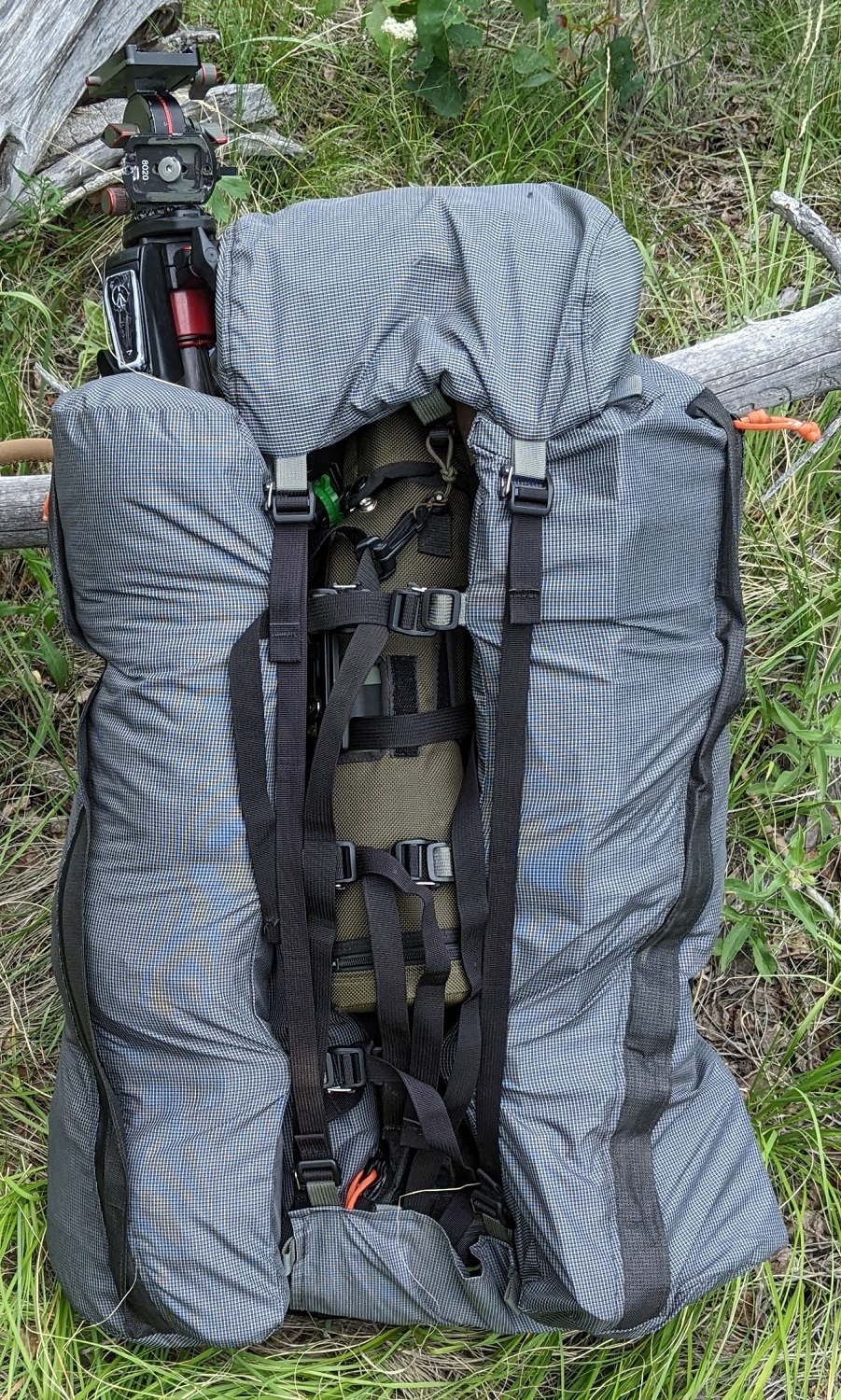 I found loading up the Wingspan pockets was significantly easier when detached and laid on the ground or hung by the top loop.  Attached to an upright frame on just the gatekeeper side, I found the unstructured Wingspan too floppy to put things in easily.  With tension applied on the tri-glide side pulling the Wingspan taut, the issue would be resolved, but I still preferred just to detach them fully. 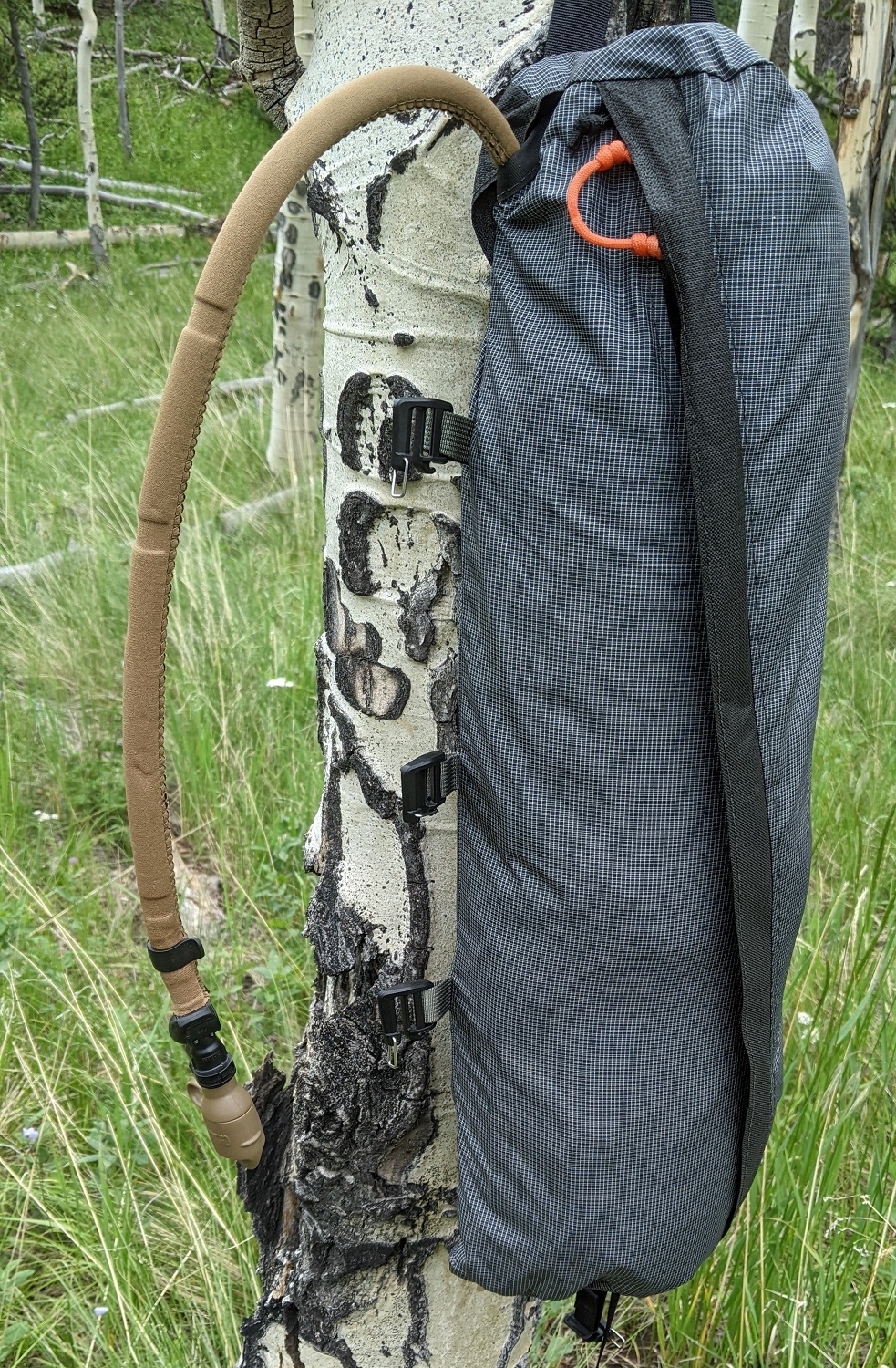 Speaking of the triglides, I questioned their usefulness initially due to my familiarity and fondness for gatekeeper straps.  The answer I received was that one could thread ¾” webbing through the tri-glide and gain roughly an inch of compression distance versus putting a gatekeeper through this same loop.  In practice, this worked as explained, and it is a simple method to implement. 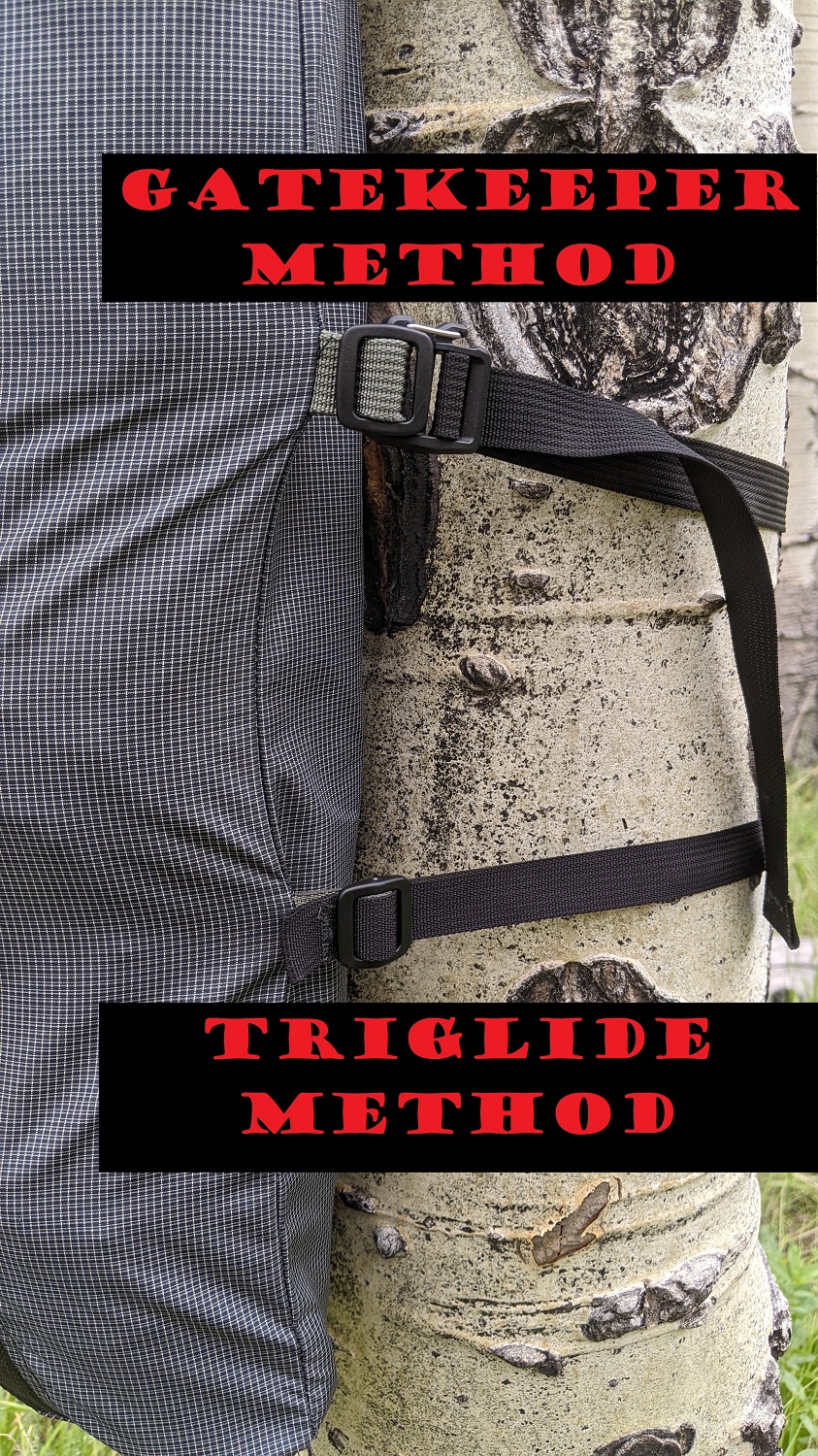 To give a sense of capacity, I was able to easily fit a Kowa 884 with a 1.6X extender and a Sirui1204 tripod with a Promaster spch20 head.  Replacing the Kowa with a Maven S.1a worked as well, although a little snugger due to having an angled eyepiece.  I think a Wingspan with a spotter, puffy, Hillsound stool, snacks, and a beanie would be a great utilization of the modularity and keep task-oriented items organized and together.  The internal loops for a bladder or pullouts are smartly placed adjacent to the connection points for the gatekeepers so that any weight on the internal loops does not pull on the material and cause the Wingspan to distort and pucker. 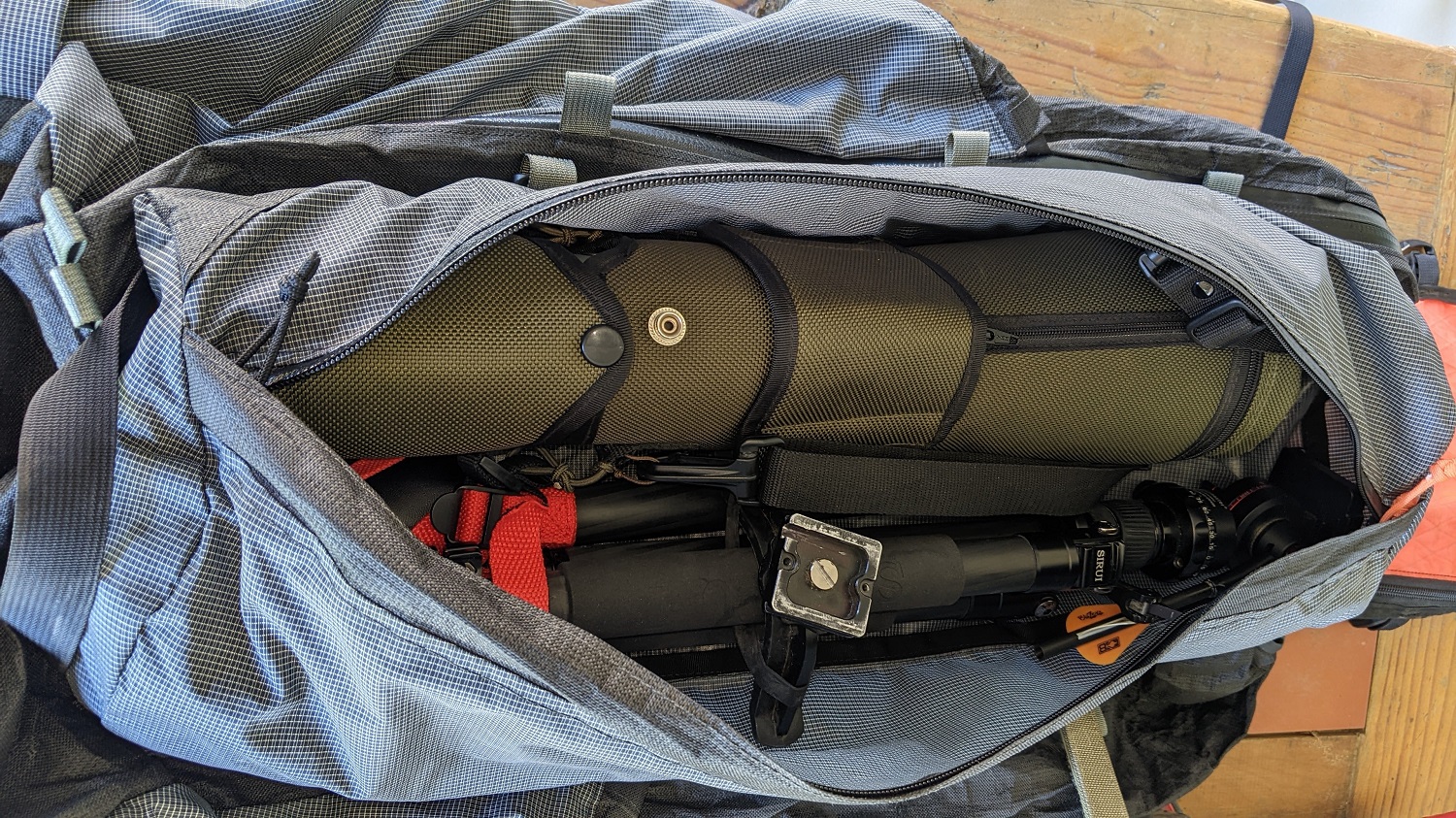 The quick detach advantage the gatekeepers bring makes organizing gear and adding or subtracting the Wingspan Pockets very easy.  I could see a scenario where leaving a Wingspan at a kill site to lighten up while packing the first load of meat out makes sense, or conversely, quickly dropping it at camp on trip one before heading out for trip two.  I could also see a person swapping Wingspan Pockets over to their buddy’s pack while they go on a solo stalk without worrying that something will get lost in the field.

Earlier I mentioned the UltraPE 400 material that the Goshawk is constructed from.  UltraPE 400 is a gel spun Ultra High Molecular Weight Polyethylene (UHMPWE) that results in some outstanding specs.

(Above data direct from material manufacturers Challenge and X-Pac)

Unfortunately, 500d/1000d Cordura Nylon has been around for more than a few decades, and tracking down reliable and accurate specs isn’t happening.  My professional experience in the textile world puts the best 500d Cordura at or a little ahead of X42 weight, tear strength, and abrasion resistance, but without the waterproofness.  Why aren’t the Wingspan Pockets made from UltraPE 400?  The SpectragridHT material has a much softer hand, and its suppleness allows it to be sewn at the complex angles needed for the Wingspan design much easier.

Some Questions from the Rokslide Forum Community:

~How long would it take to detach and remove the Goshawk from the frame with the Wingspan Pockets attached?

~Can Wingspan Pockets only be used on packs from Seek Outside?

No, the Wingspan Pockets can be used on any pack system.  The webbing loops for the sewn-in gatekeepers/triglides could accept other types of connection hardware, and the ¾” gatekeepers will slide into most 1” webbing loops.  Webbing straps can also be used.

I think so.  The Wingspan Pockets provide an affordable option in adding capacity rather than buying a new pack.  For the hunter who likes using a smaller pack during early seasons but needs more for late seasons hunts, I think the Wingspan pockets are just the ticket.  Or, for the day hunter who needs the ability to haul out meat, Wingspan Pockets on a Revolution frame would be as lightweight of an option as I can come up with.

For my archery day hunts this year, I will be doing just that and adding in the Merlin as needed.  For overnight trips, I will use the Goshawk will be used with the Wingspan Pockets, and I will likely do the same for my rifle hunts where cold weather layers are needed.  Overall, I think Seek Outside was successful in creating functional and simple modularity for the one-pack person. Order here.