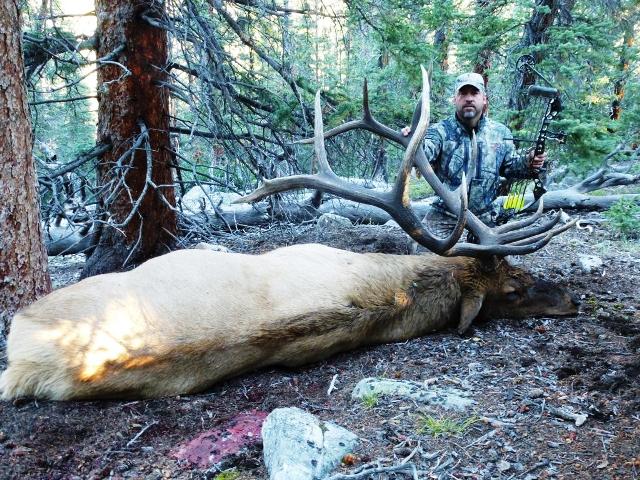 September never comes soon enough, but it was finally here.  My friend Les Welch and I were once again on the road heading west for another extreme elk hunting adventure. This time the destination was a Colorado limited draw unit. Like most of our hunts, the planning started several years ago. We play the preference point game like many other hunters and have a long range plan for the various states. During the years we don’t draw a tag, we hunt an OTC unit somewhere. Going a year without chasing bugling bulls in the high country is not an option!

During the long drive west, we discussed our plans and reminisced about past hunts. In 2011 we both killed bulls in a Colorado OTC unit.  I told Les that I felt like I had achieved my elk hunting goal on that hunt by killing a 6 x 6 that was knocking on the 300″ door. I told him that I felt like the pressure was off but I was still going to hunt as hard as ever. We were filled with anticipation for this hunt but I felt more relaxed; it was a good feeling.

Our plan was to rendezvous with a friend who had already been hunting the unit.  It was the afternoon of Friday the 13th when we met up with him. I’m not much for superstitions but it was nice to finally arrive at our destination uneventfully. Recent torrential rains had caused much flooding in Colorado but had ended just before we arrived.

We were road weary from 24 hours of travel with very little sleep and were not yet acclimated to the 10,000 foot elevation. At the rendezvous spot, Les and I strapped on our packs loaded down with enough food and gear for several days and headed up the mountain behind our “Mountain Man” friend. Thankfully the Mountain Man and Les, who are both much younger than me, showed me a little mercy.

Our friend showed us around some of the country and then left the following day to pursue mule deer. He had already filled his elk tag with a nice bull the previous week. We hunted that area for a couple of days and coped with the return of rainy weather. We had very little action with only one encounter on a small bull and another bull that bugled a couple times and then went silent.

Les and I always have multiple options in mind based on pre-season research and map study. We decided to break camp during the rainy weather and drive around to get a better feel for the unit and the amount of hunting pressure it was getting. The next day we packed in to a new location and set up camp based on our recent recon mission. That night was a full moon and much to our pleasure, we were serenaded most of the night by bugling bulls. For the next few days, we hunted that area fruitlessly but were kept awake at night by bugling bulls. It was encouraging but also frustrating because they would quit by about 3:00 am and were long gone by the time hunting hours arrived.

One day we hunted our way up the mountain and at about noon came upon a beautiful alpine meadow that was blanketed in fog. We took a break to soak up the view, eat some lunch, and watch the fog morph into various shapes before finally burning off. We had moved to the other side of the meadow when suddenly a bugle rang out very close to where we had taken our break. We looked at each other with that “are you kidding me?” expression and quickly headed back in the direction of the bull. We made a quick assessment of the terrain, wind, and thermals and Les got into position while I moved back to call. Instantly the bull bugled in response to my calls and it was game on!

I could hear him approaching quickly and soon got a glimpse of good antlers. Les was between us—perfect! I was anticipating the sound of Les’s shot when a fickle breeze brushed the back of my neck taking our scent in the direction of the bull. The woods went silent and the bull vanished…so close! I’m always amazed at how such a big animal can just disappear.

That night, the bugling bulls again kept us awake but went silent long before shooting light. We decided that in spite of our close call with the bull, we needed to move our camp higher to get above the bulls since they seemed to be moving back up the mountain by about 3 am. 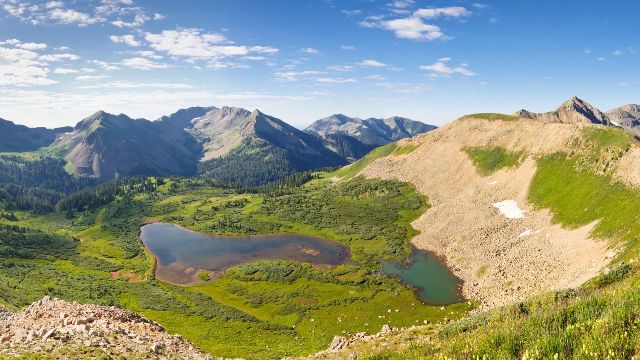 The next day, after a strenuous hike up the mountain with packs bearing enough food and gear for eight days, we arrived at our spike camp at an elevation just shy of 12,000 feet. As I was clearing a spot for my tent, I found a horseshoe. Surely this had to be a sign of good luck! I immediately named the area “Horseshoe Mountain”. Much to our disappointment, however, the next few days of hard hunting from daylight to dark were a bust with not one elk seen or heard. There was ample elk sign but apparently it was not as fresh as we’d initially thought. The rain had made the sign appear fresher than it was. It was time to cut our losses and go back to our lower campsite; at least we were hearing bugling there.

Once back at our lower campsite, we wondered if the bulls would still be there at night. We had barely dozed off when the first bugle awakened us. The bulls continued to carry on throughout the night but being a few days later with moonlight waning, they continued to bugle right up until daylight. That morning we hunted our way up the mountainside in the direction we believed the elk had gone. We were moving slowly, staying alert, and calling occasionally hoping to get a response so we could set up and double team a bull.

We stopped momentarily while I made a few cow mews and a young bull bugle but got no response. We moved about 40 yards and approached the lip of a bench just above us. About 25 yards above the bench, I suddenly saw the huge main beam of an elk antler quartering towards us. I froze and whispered “bull… big bull!” Les was close behind me with a spruce tree blocking his view. The bull stopped just above the lip of the bench. By the position of his antler, it appeared that he was looking down and behind us in the direction where I had made the calls moments earlier. We could hear other elk moving around as I frantically nocked an arrow. Les still could not see the big bull but a spike bull stepped into his view about 10 yards to his left. Les whispered “there’s a spike right here, can you still see the bull?” I envisioned the big bull with his ears cupped in our general direction, listening for the elk he thought he heard and I was worried he would hear Les’s whisper. As quietly as I could I whispered “Shhhhh”.

Suddenly the bull stepped out from behind a spruce tree and his entire rack and body materialized at a distance of 25 yards. He began to walk downhill, directly at me but I was pinned down with no way to draw my bow. I remember thinking how incredible it was to have such a huge bull bearing down on me at close range. Just as I was thinking I wouldn’t get a shot, his huge rack became his undoing. His antlers would not clear some overhead tree branches so he cocked his head to the side to clear the branches. I took advantage of the brief opportunity and quickly drew my bow. At a distance of 19 yards, he hesitated to step over a large log. I calmy settled my 20 yard pin on his chest. The next thing I knew, my bright yellow fletching was buried perfectly into his chest. At the shot he whirled and ran. Les jumped out from behind me to see the bull run off. I couldn’t believe what had just happened. I’ll never forget the sight of his wide rack as he ran off!

There wasn’t much time for celebration because there were other elk milling around so I immediately switched into caller mode and Les got into position as we worked the herd for about 45 minutes looking for another bull. This was a welcome distraction and killed an hour before we took up my bull’s blood trail. We found blood instantly and the trail was very easy to follow.

The trail took us up and over the bench and as we started down the other side we jumped an elk that ran off down the mountain to our right. Seconds later we came upon a large empty bed soaked with blood and my heart sank. It appeared that we had just kicked my bull out of his bed. As I looked down the mountain to my right in the direction the elk ran I began to consider our options. After a few seconds I turned my head to the left and there was my bull, lying dead 10 yards away! It was an incredible, almost surreal sight. 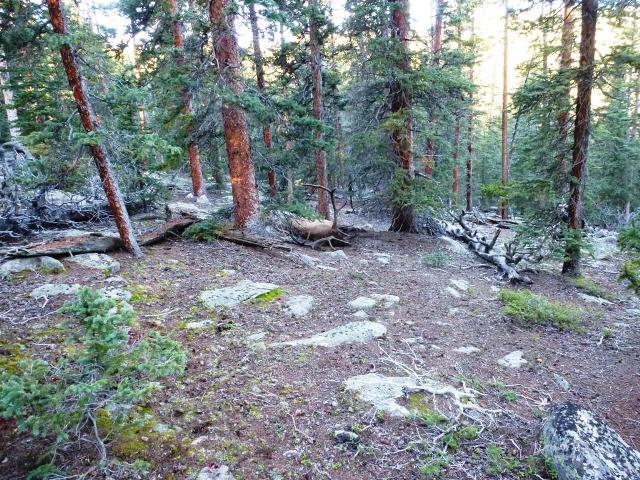 What had been a very challenging and possibly the least productive elk hunt I had ever been on, suddenly resulted in a 7×6 bull of a lifetime. We still had a week left and and renewed confidence that we would also find a bull for Les…

Click here to read part two of The Bulls of Horseshoe Mountain! 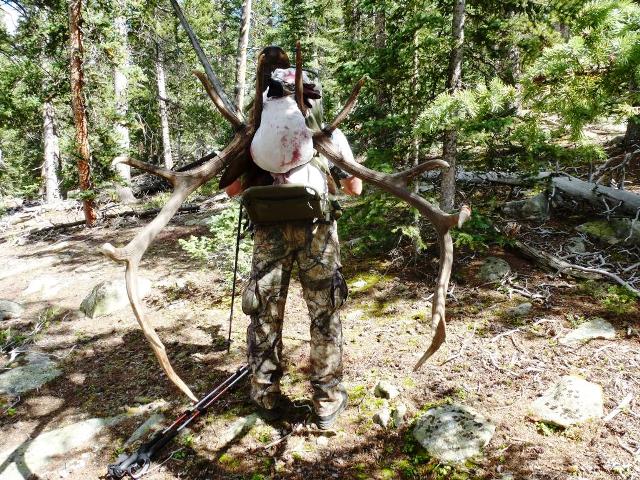