Won one of Doug's monthly drawings...had the bino's to me that week!
OP

Centralcoastca said:
I won a bha raffle that was a pretty big prize, had a bunch of stuff from various companies including yeti and I noticed that the stuff all trickled in from the directly from the different companies at various times spread out over a couple months. I actually still haven’t received a kayak paddle probably 8 or 10 months later… I wonder if you talk nice to the right yeti person and explain the situation if they might just figure it out and handle it? I’m sure there’s someone that is in charge of their promotions or whatever. Its no loss to you, since it was just a random win, but they are nice coolers and you rightfully won one.
Click to expand...

You’re right, the worst they can say is no. I never win anything and was pumped.

TheTone said:
Is the wrap still on it?
Click to expand...

Jesus i hope not for his sake. When i see the Tundra hushin bros gave away all I could think was that poor sap had to drive that fugly ass truck in public back to his house.

Don’t believe it would be yeti, ordered a 65qt tundra two weeks before Christmas. It arrived in a week.
OP

I've reached out directly to Yeti, I'll keep you posted, but I'm not holding my breath. On another note, Orion Coolers are made here in my hometown. I'm helping with a fundraiser, and reached out to them last week to see if they could help. I'm picking up a cooler this morning directly from the factory, free of charge, to support the local literacy program. So at least some companies still do the right thing.

Nobody is a winner when dealing with Mtn Ops

Trevor96 said:
Guy I work with won this truck a few years ago. He still has it
Click to expand...

Does his name happen to be Kyle?

I've won stuff from RMEF and NWTF. If the items had to be shipped directfrom the company it took a while but not more than a month or 2 tops.

Sent from my SM-G991U using Tapatalk

TSAMP said:
Does his name happen to be Kyle?
Click to expand...

TheTone said:
Is the wrap still on it?
Click to expand...

Yes it is
T

Why would they run promotional giveaways for good publicity, only to not follow through with it? And as a result, end up with bad publicity instead? Thanks for sharing. Curious to see if you end up getting your prize.
V

There must be a ton of giveaway winners in Utah...there's no way that many people actually paid for a Mtn Ops flat bill, is there?

I was a winner on the first shot challenge, put on by rokslide and had my stuff sent quickly and there was a bunch in there. Just thought I'd give a good plug for these folks.
OP

Well, I just got an email from UPS that I have a delivery scheduled for tomorrow and its coming from Yeti. So maybe starting this thread helped...maybe. I'll post an update when the brown truck leaves.
OP 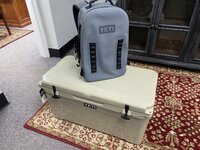 Well, I guess being persistent paid off. If I hadn’t stayed on them, I’m 100% sure I wouldn’t have gotten this stuff. Glad I did though
You must log in or register to reply here.