I'm back for round two. If you want the run down
on my hunt the first two weeks of October click below.

Good morning everyone, I drew the KS OIL elk tag on Fort Riley. Just starting my hunt this morning. Depending on the area I can hunt with a muzzleloader or rifle, this morning is muzzleloader. The morning didn't start as planned, I think me and the gate guard weren't communicating well...

Get it done! Happy hunting

Nothing exciting tonight. Got here to late to really hunt. Tried to scout some areas I found last time most already had hunters in them and I didn't want to screw them up. Was able to get into a bedding area that was still active to set up a camera. 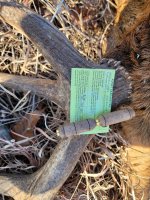 Story coming. Started as such a shit show

That's fantastic. A notched tag has a way of wiping the slate clean on a shit show.

Alright so the morning was all just me screwing up. To start I over slept on day one of my elk hunt part two and a shitty excuse for it. I've got a damn tooth ache that comes and goes. Got seen before I traveled and I have a cracked lower molar. Going to need a root canal but they couldn't do it then and had to wait until after the hunt. Any way the damn thing starting throbbing last night keeping me up from midnight to 0300. So long story short my dumbass over slept, no excuses. Suppose to leave at 0540 in the morning but I wake up at 0558. Wake up panicked and just through shit on and go. Now I'm driving in at first light instead of being set up. Well maybe I'm lucky I spot the heard of about 60 elk coming in, there running late also. I scramble to get set up on them and barely get in place when they start crossing the opening in front of me.

I'm a little out of shape right now and the rush has me breathing harder than I'd like. Three small bulls cross first and there running, shit there all running. Did i spook them? A shit ton of cows cross running, no big bull. I stay patient, finally I see him coming with ten cows and calfs. I kinda catch a break he stops perfectly broadside at 100 yards with a damn calf right in front of him. He starts running, ive got buck fever and still breathing hard. I shoot and flat miss a hundred yard shot. ****! They turn back to the draw they come from.

I still hunt the tree line of that draw finding/bumping every elk except the herd bull. I also realize I've lost my phone. Spend an hour looking for it just to find it at my original shooting point. Pissed at myself I give up on the bull and decide to go check another spot another hunter informed me about. In the truck now and half way to the other spot I decide to turn back to set up a trail camera hoping to catch them crossing again before hunting this spot again.

On the way back I see ivory tips sticking up in the brush along the tree line I just walked a few hours before. It's him! I keep driving and get set up down wind for an approach. Theres an old rock fence line that is overgrown with brush between me and him running directly towards him. I'm able to crawl within 50 yards of him bedded. I cow call him to get him to stand...

What a goofy bull. Seems like most of the bulls that come from there are goofy like that. Congratulations, he's really cool.
H

Congrats again. That's one crazy set of antlers, very cool. I bet that was an incredible relief to get a second chance at him and make good on it.

Dos Perros said:
What a goofy bull. Seems like most of the bulls that come from there are goofy like that. Congratulations, he's really cool.
Click to expand...

Hit by a few bomb.

Nice bull
You must log in or register to reply here.

A
Newb from Kansas