How to Kill a Wolf?

Well, we've got the green light to hunt wolves as predators in Wyoming (most of the state). I'm assuming that you'd hunt them much like elk, with the same patterns (since they're chasing/following elk) and first/last light glassing but I really don't know. Perhaps they will respond to a predator call.

Anybody have a good idea of how to get one of these elk eaters other than just dumb luck/good timing?

Some have success with calls but it can take a lot of calling to find em.

Watch for ravens and eagles on a kill and set up near that or build a blind and wait.

Howl at night or early morning to locate em.....

I have seen more than 20 in the predator zone and everytime they have been chasing deer or elk. One time I watched three of them follow two coyotes following a buck deer. When I hunted (past tense due to wolves) coyotes where I have seen these wolves I would use my predator calls and coyote howl. Usually you could get a deep bellow howl. That was pre-hunting so I would just get up and leave.

Since the title says how to kill a wolf...
The most effective method for killing wolves is trapping over here.
Not sure if that is allowed out there but the majority of our tags in Wisconsin were filled by trapping in our wolf seasons.
OP
3

Trapping, hadn't thought of that but it certainly makes sense.

I'm focusing on the rifle wolf killing. You'd think that there were 5 wolves behind every tree based on all of the complaining and bickering that's gone on over the last several years. Now that it's legal, I don't seem to be hearing about very many wolves being shot... I think I've heard of 3-4 as of now though it's likely going to pick up as the snow comes out of the mountains and people can get up high much easier.
A

Locate, conceal, and call.
That may sound overly simplified, but it really isn't. I hunted wolves a long time before I shot one, and the day I did it was almost inside of one hour from start to finish.

Previously I had walked for miles and miles posting up on vantage points and calling overlooking miles and miles of empty Alaskan swamp.
Previously i had worn my carhart insulated bibs and a my big, black mt. hardwear down jacket, etc.
Previously I imagined a walmart distress call hadn't been blown in every swamp within 5 miles of our few roads.

Last year, I had full snow camo covers, face mask and hat, built a scenario with howls, magpie calls, barks, etc. and started my hare distress calling sequence AFTER I knew I was within a few miles of some wolves. I could hear them howling, checked my maps (phone) and found a likely spot they would have to funnel within about 75 yards of me, set up and started calling.

After I realized they had heard my calls, I kept up the audible "scene" up for over 30 minutes with breaks and logical sounding sequences. I was backed up against a tree for almost 50 minutes before they rounded the point of scrubby black spruce. Of the pair that came in, at about 200 yards, one split off on a hard 90 degree turn into some trees while the other one came on. (I'm certain in an attempt to cut off escape.) So keep that in mind if there are two+ wolves and you have your eye on a particular one, at some range it might disappear in attempts to flank your dying "critter".

I shot the smaller of the two at about 125 yards. (the non-flanker) After so many years of calling into space, it seemed almost silly to have success calling at something you know is there in such a short amount of time.
I guess it's like grunting into the forest after deer... Much better if you can actually see the deer.

As far as hardware, think antelope/texas deer calibers/loads*. I used a 95 grain, bonded 6mm and wished I had a little more energy transfer but one shot was all it took. I've since acquired a 6.5 Creedmoor and think the 120 grain amax is perfect for wolves. I also used to think I needed a ultra precision rifle to hunt wolves. Proved that very wrong with my trusty, but accurate, Stainless MkII .243 Win.
.25 anything, 6.5 whatever, or .270 with a 100-130 grainer that isn't to well constructed would be and is my choice.

*Keeping in mind the coyotes in Alaska are taller than Texas whitetails...
H

It can take a whole lot of looking to find wolves. Every time I see a wolf they are trailing some form of prey animal.

For a lot of folks, calling isn't particularly productive. Most of the folks I know that connect are either spot and stalk or simply target of opportunity. That's how I shot mine, it simply snuck up on me and I shot it at close range.
OP
3

Thanks for the info guys.

Ryan and Jeff know how to kill them now..... FOXPRO 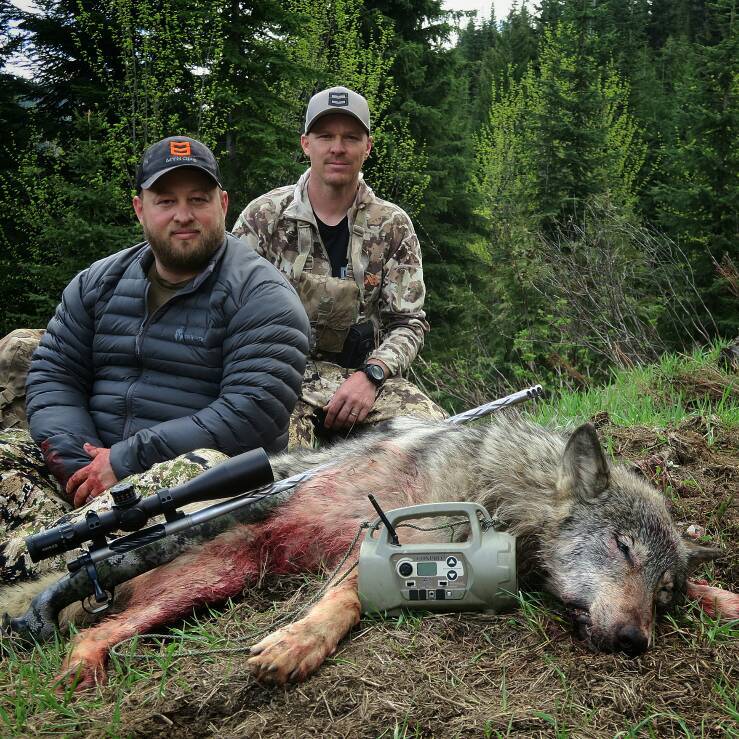 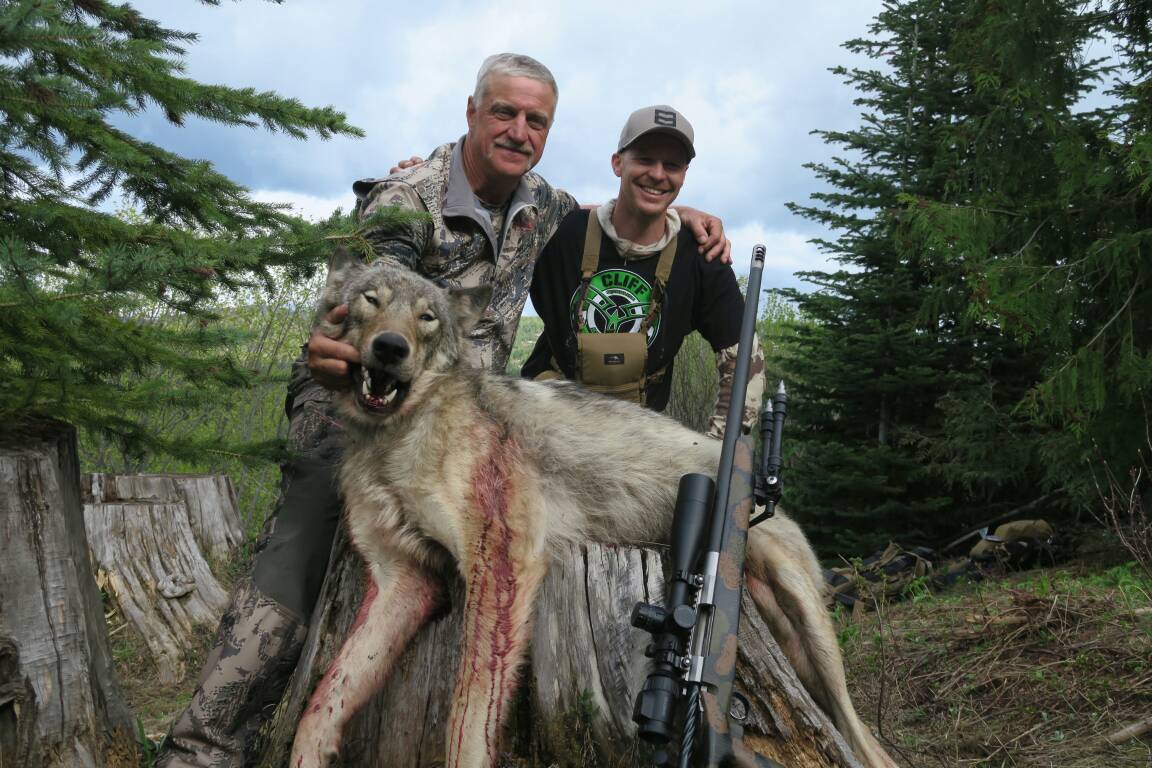 When is the season on wolves in WY?
M

I can't find season dates on the WYFG website, is the season open year round?
2

The Clark Boys in Star Valley country have them dialed in, they are hell on them with the sleds and snow.

I stalked this one recently while he and a few others were howling at night, arrowed him at 41 yards. Stalked and missed one the evening prior at 50 yards. Had one at 35 yards this past weekend with too much brush in the way to shoot.

Nick Muche said:
I stalked this one recently while he and a few others were howling at night, arrowed him at 41 yards. Stalked and missed one the evening prior at 50 yards. Had one at 35 yards this past weekend with too much brush in the way to shoot.

I just returned from the north slope of AK on a float hunt. Late in the hunt one night I pulled out an ecaller and tested it out with a distressed hair call, about an hour later sitting around a camp fire I noticed a wolf about 350 yard away on the opposite side of the river watching my hunting partner and I. As I moved in position to take a shot the wolf began walking on the bank and due to the distance and moving target I did not take a shot. The wolf continued to move at a slow pace until it disappeared but did not appear too frightened of us, likely because it was across the river.

Two nights later we used the same call and were hidden behind a knoll. Within about thirty minutes I looked up and a different wolf was no more than 30 yards from us and had not yet noticed us. I tried to quietly lift my rifle but just slightly rustling the brush the wolf heard us and nimbly bolted from the area, causing us to miss yet another opportunity. The wolf had circled around us using a shallow stream bed that must have kept him under just enough cover. Prior to the wolf arriving an eagle arrived almost immediately as I began the call and swooped around the caller multiple times. It was quite the show, I half expected the eagle to pick up the caller.

Though I missed both opportunities on the whole it was a very cool experience. We tried again a night later with no luck. The calls can work very well but I do feel it will depend on the area you are in. It worked well in my situation I believe due to the remoteness of the area I was in.
The call may work very well in WY as well but my guess is that it will depend greatly on hunting pressure and the number of times the wolves in the area have heard the call. I am not an experienced wolf hunter but figured I would share the story and throw in my thoughts. Good luck. 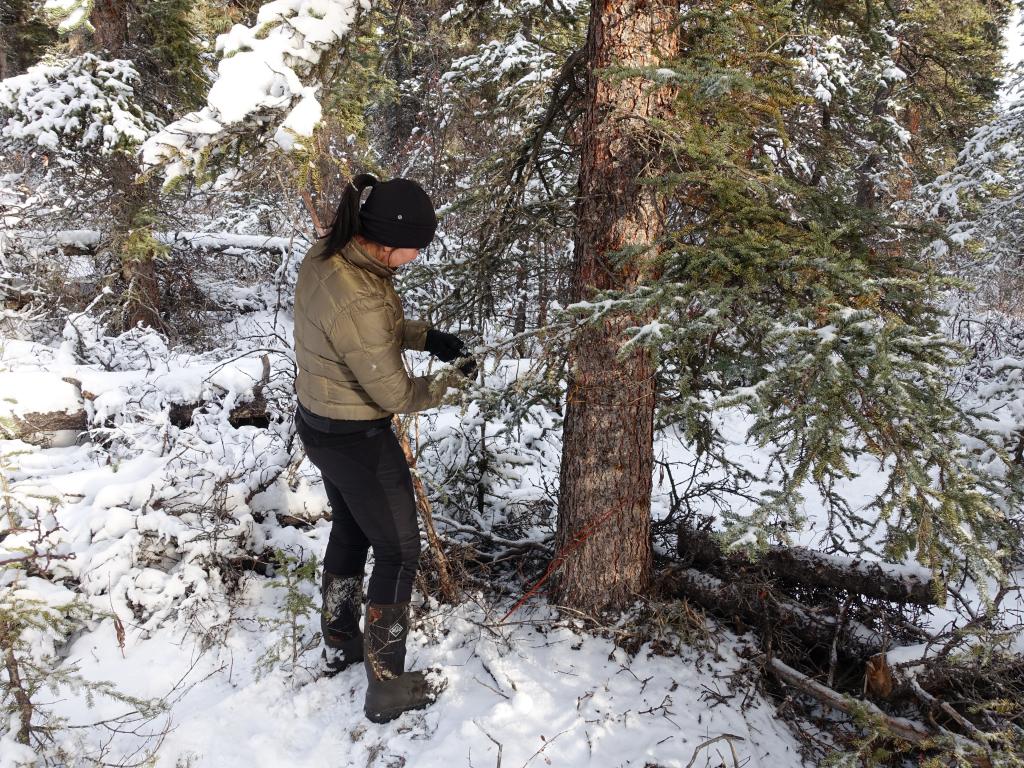 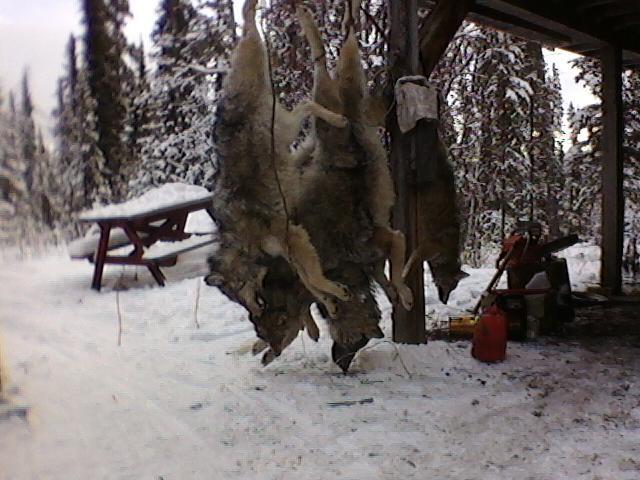 I killed one in Canada but it was dumb luck. I was on a whitetail hunt and also had a wolf tag.
You must log in or register to reply here.

How to Research Mulies Like Elk - So Much Elk Info/Theory, What About Deer?