Well I waited all week last week for Thursday to arrive, waded through 3 exams, and finally got to head out hunting to help my girlfriend try and fill her first ever tag. I made the 4.5 hr drive with no problem and arrived just in time for dinner and a beer in camp. Up to this point she had been hunting since Sunday and had seen 4 or 5 bucks, one she didn't feel comfortable with the long shot through swirling snow, and another that she busted out of some brush and wasn't able to shoot.

It had been snowing and/or raining all week and apparently I brought along the good weather because it was clear and cold when we got up in the morning on Friday. We hunted this buck from 7:15 til 12:30. We glassed and glassed and we finally picked him up as he stood up at about 300 yards for about 20 seconds and crossed from one patch of brush to another, I immediately said "He's up! You can take him now!" She couldn't find him in the scope before he bedded back down however so our stalk began. She was feeling pretty dissapointed that she hadn't capitalized on the opportunity, "Don't worry" I said, "Just picture your shot, put it on his shoulder next time and give a gentle squeeze and he will go down. We are gonna get him."

The buck was tall with very white antlers, the brush was taller and no matter how much I glassed I couldn't pick him up. We moved about 30 yards at a time not wanting to spook the 20 or so doe and the one little forked horn he had around him. We got within about 100 yds when I saw him stand again, this time for maybe 10 seconds before he disappeared into the brush again, my heart was racing at this point and Jenny was pumped to say the least! We took a few minutes to calm down and talk out our game plan. She decided she wanted to move forward after him, a decision I thought was wise. Well we moved low and slow for another 30 or so yards and spooked 2 doe who were bedded, they promptly rounded up the rest of the doe and the forked horn and started to head away from us at diagonal. I told her that if she just wanted any buck she could take the forked horn anytime, she was contemplating it but ended up holding off. We knew the big guy was still down in the brush somewhere close as we had not seen him stand and neither had our spotter who was about 800 yards to our right on top of a ridge.

At this point the forked horn buck had stopped about 150 yards away with the doe. Jenny decided that she we should go forward, "It's gonna happen fast" I said, to which she replied "I'm ready". Cool as can be she moved forward through the brush, moving slowly, seemed like a mile through the brush but was probly more like 60 yards thumb on the safety, a few more steps. Nothing. Thoughts are racing through my head, maybe he snuck out?

Boom! Her 270 set my ears to ringing and I watched the buck drop hard. He didn't get up. I am elated at this point, Jenny is jacked with adrenaline and starts shaking. She thinks she missed because she didn't see what happened, I told her we need to wait a minute, she reloaded and safed up her rifle. "Are you sure I got him? What if he ran away and you didn't see?" she asked, I did my best not to laugh at her excitement and worry, but I was confident that he was dead. Our radio started going off from the spotter "what happened, what happened?", I replied "She nailed him." 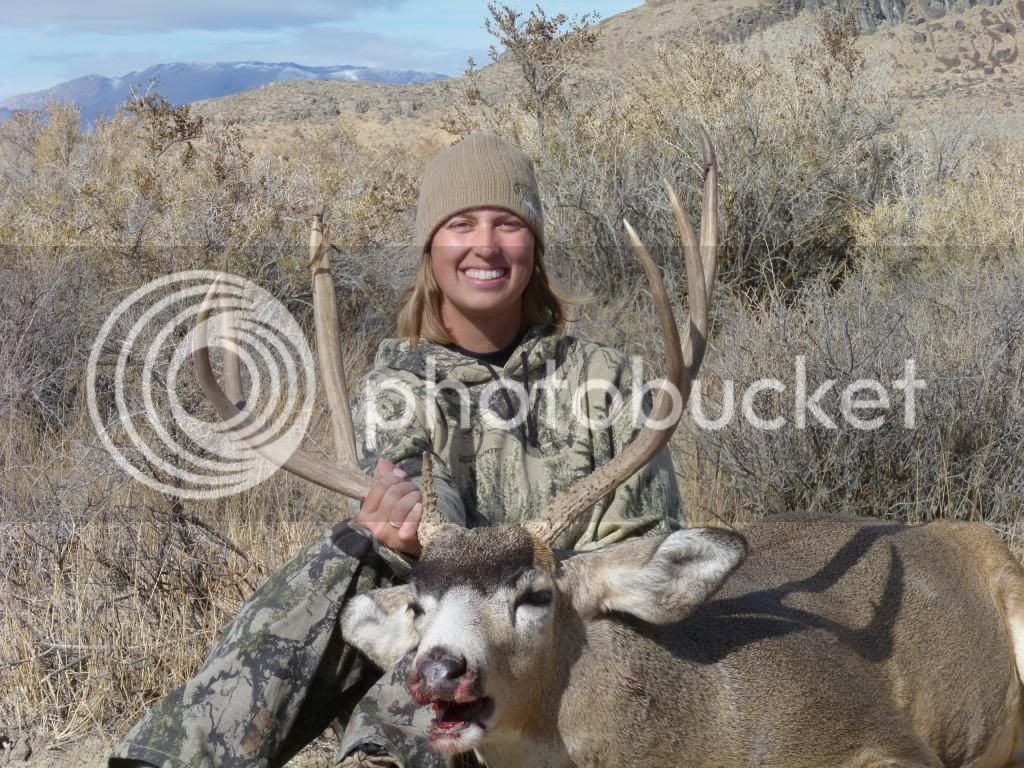 Turns out the buck couldn't rub off all his velvet, so that is pretty neat. I should also include that I had the easy part of the hunt, and that Jenny had a truly wonderful group of friends and her Dad helping her out all week in locating this buck and hunting and for that I am so thankful! I am very proud of her! There is nothing like spending time in the outdoors with good friends and loved ones.

Great story, pretty 3, and awesome memories im sure! That is too cool. Congrats to both of you!
T

Thats the stuff memories are made of!
congrats to the hunter, beautiful deer.
C

A girlfriend that hunts? Sounds like you just doubled your odds of being on great hunts each year. Congratulations to to the shooter and may that be the first of many, many hunts to come.

Hey guys! I'm the girlfriend of Rock 2.0 and I can't say enough how much fun this hunt was! It was a lot of work, but to say the least I am officially addicted! My biggest thanks go to my boyfriend for going shooting with me over and over before hunting season, making a cardboard deer so I could practice shooting a "deer", sharing all of his knowledge with me, and putting up with me and my nerves during the 5 hours we were creeping up on this guy! Can't wait to do it again next year!

"But if you want to feel what it is like to be human again, you should hunt, even if just once. Because that understanding, will propel a shift in how we view and interact with this world."

I threw a link to this up in the women's forum, too. Don't want any ladies to miss this. Good job.

Thanks for sharing your awesome experience. Great buck!

Congrats on the hunt and the fun!
OP

Thanks all! Good idea putting that on the woman's forum Robby, thanks!

Thanks Dr, Bowunter, and Becca!

In God We Trust

Congrats, I am taking my wife on her first hunt here in Colorado 4th season for a bull and I can't wait.

Just an update! Here is the final mount that was completed from start to finish by me! (actually, Rock2.0 helped a lot!) We used an old fence post and barbed wire. To mount the head to the board we used Bondo which was pretty messy, but was nice because it set up quicker than the gorilla glue and paper towels that we had used on one of his mounts in the past. It was great doing everything myself from start to finish! View attachment 6597

i guess you have to click on the attachment to see the picture...I'm still new at posting pictures on here!