Earlier this summer I posted about what I learned from last year's hunt, which was my third straight year trying to get a mule deer but instead defining "success" in terms of lessons learned rather than meat in the freezer or antlers on the wall. I talked through what I learned (or thought I learned) with Jordan on the Rokcast afterward, too. That was all part of preparing better for this year.

The day before the season started, I hiked a few miles up trails with no recent human tracks, then climbed a couple more miles offtrail through a rugged basin. 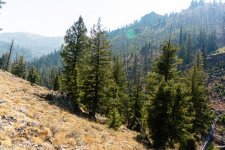 Smoke from the California wildfires prevented much glassing in the general direction of the sun, but I was able to overlook some decent ground anyway. I was disappointed for most of the evening to only see a couple of deer, likely does, in the distance. However, toward dusk, I found a pair of suspicious sticks curved in toward each other on the skyline of a saddle a mile from camp. I watched them until they lifted up on a deer head, and the first of a pair of bucks fed up into the saddle. They were just far enough away, about a mile, that I couldn't count points very well in the fading light. But I could tell they were better than yearlings, and that's enough to get me excited. 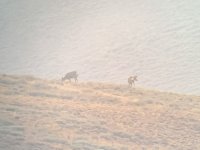 It was exciting to see bucks already, but I still hadn't even started glassing the main area I came for, because the haze and sun angle made it impossible in the evening. Seeing no signs of pressure from other hunters nearby, I chose to spend opening morning glassing the basins I was there to target. I only saw two deer all morning, a pair of decent bucks feeding along a rocky chute two miles away. It was also difficult with these deer to judge anything more than "better than a yearling," but they were not obviously better than the closer bucks from the night before.

I spent midday moving camp farther up my ridge, closer to the bucks from the night before, so I'd be well positioned to try relocate them in the evening and morning without long hikes in the dark. At one point a spike buck appeared with his mother and her new fawn 800 yards away in the valley bottom, and I could hear my empty freezer calling, "A bird in the hand..." But I wasn't ready on opening day to go after a spike after seeing four bigger deer around. 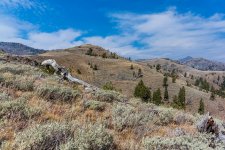 I was happy to have a new camp set up by 4 pm when there was "a chance of rain." The pretty weather in the above picture had given way to ominous clouds missing me to the north and the south, and it looked like I might have dodged the bad weather as I headed up to rocks overlooking the saddle for evening glassing. Then this happened:


From there, the storm intensified to the point that I couldn't even see the far side of the saddle through the blowing snow and sleet, and the wind was so strong I could barely stand against it. Figuring the deer would be hunkering down anyway, I went back to the tent two hours before dark. My new Stone Glacier Skyscraper 2P, pitched on the lee side of the ridge, held up well despite getting blasted from every direction by erratic, eddying winds.

The storm died down in the middle of the night. My alarm woke me an hour before shooting light, which wasn't really enough time to force myself out of the warm sleeping bag into my partly damp & frozen outer layers and reach my glassing spot by first light. Something--maybe one of the bucks--detected me passing above a patch of thick timber, and I heard it kicking rocks down the mountain and eventually snorting. Then, when I got to the top and started rounding the crest of the saddle to view the basin where I hoped to find the deer, I was stopped by three small bull elk staring at me from a few hundred yards away. Several more elk were scattered around the basin, and I had no way to glass where I wanted without them sounding the alarm. Instead, I slowly knelt down and glassed from where I was.

Soon, direct sun started to light the freshly snow-covered grassy saddle and surrounding sagebrush slopes. A dark spot caught my eye on one of those slopes, on the back side of the saddle from the major basin, and my binos revealed a bedded muley buck, plain as day. He was facing downhill, alert for danger, but I was 400 yards above and diagonally behind him with a perfect rock outcrop for a shooting rest. I had recently upgraded my Tikka .300 WSM and practiced some good groups at 400 yards, but there was a bit of an unpredictable breeze and that still just feels like a long shot to me... plus, 400 was the ballistic distance and I realized the straight-line distance had to be at least 450-500.

I knew the buck would be rising soon with the sun hitting his bed already, but I gambled anyway on sneaking closer rather than trying a shot that made me nervous. First, I had to drop off the top left corner of the knob above and cover about 30 yards in plain sight of the deer before sinking far enough into the saddle that terrain would hide my approach. The fresh snow helped me make that move quietly, and the buck never looked my way. 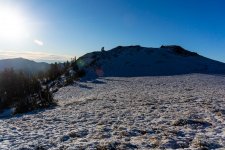 I walked fast to the next rise where I expected a good view, and was thrilled to see the buck still there in his bed, now 200 yards away. However, there was no great rocky outcrop to shoot from, just little waves in the sagey slope. I settled into a position with my bipod, quietly fiddling with the legs that didn't want to stay extended in the cold. Then I got nervous about little bits of brush that might be in the bullet's flight path, so I fidgeted into another spot, and that wasn't much better. After five or so minutes of screwing around, all in partial view of the deer if he'd bothered to look uphill, I settled into position with a definite clear shot and waited for him to stand. 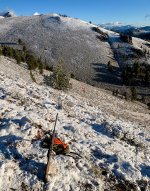 I was only there for a few minutes when he stood up to move. I shot immediately. He dropped. He stood again, but as I placed the crosshairs back over the boiler room I saw in his posture the telltale "uh oh" look of a well-shot deer. I refrained from second shot, and he was dead on the ground within five seconds anyway.

I watched for a few minutes just to be positive he was down for the count, then went back up to the top of the saddle to savor the anticipation and soak in the views. The elk in the main basin had heard the shot and decided to mosey on out the back side: Finally I got to meet my first mule deer buck. I knew he was a decent deer, but honestly I had been afraid to pay too much attention to the antlers, lest something go wrong and he slipped away or I got buck fever. Before the shot, after three years coming close but never quite getting a buck, I wasn't letting any thoughts cloud my mind except what to do next to put the bullet where it goes. Now thathe was on the ground, I could enjoy it. Yet another herd of elk watched the show from the ridge behind me (top left of the pic). 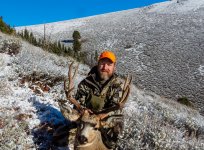 Closeup of the elk: 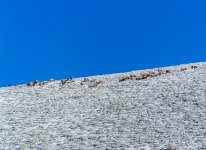 Back to my deer: 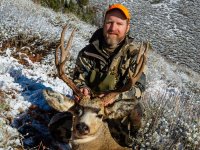 I couldn't be happier with this buck -- a perfectly symmetrical 21" 4x4 with nice mass and height. After growing up hunting whitetails, I'd never taken a buck anywhere near this size (caribou excluded). I would have been happy enough to come home with any meat for the freezer, but harvesting a deer like this, in a way like this, was so much sweeter--a dream come true.

In fact, it had gone so well I was constantly paranoid that the bad part was yet to come. That's happened to me twice before, once with a caribou-laden raft flipping seconds from the take-out and once with a wheel falling off my car on the drive home. Which ankle was doomed on the two 6-mile packs out? What kind of predator was going to attack me or my meat cache? But the bad part never came, and the next 48 hours were one big, leg-burning victory lap. I even spotted some more deer up in the buck elevation zone for next time, though they were too far to see antlers in my binos.

Just to add a capstone to an already-perfect hunting trip, I stopped for a couple hours on the way home and tangled with some big rainbow trout. I broke off an 18-incher, landed this almost 20-incher and jumped back on the road. 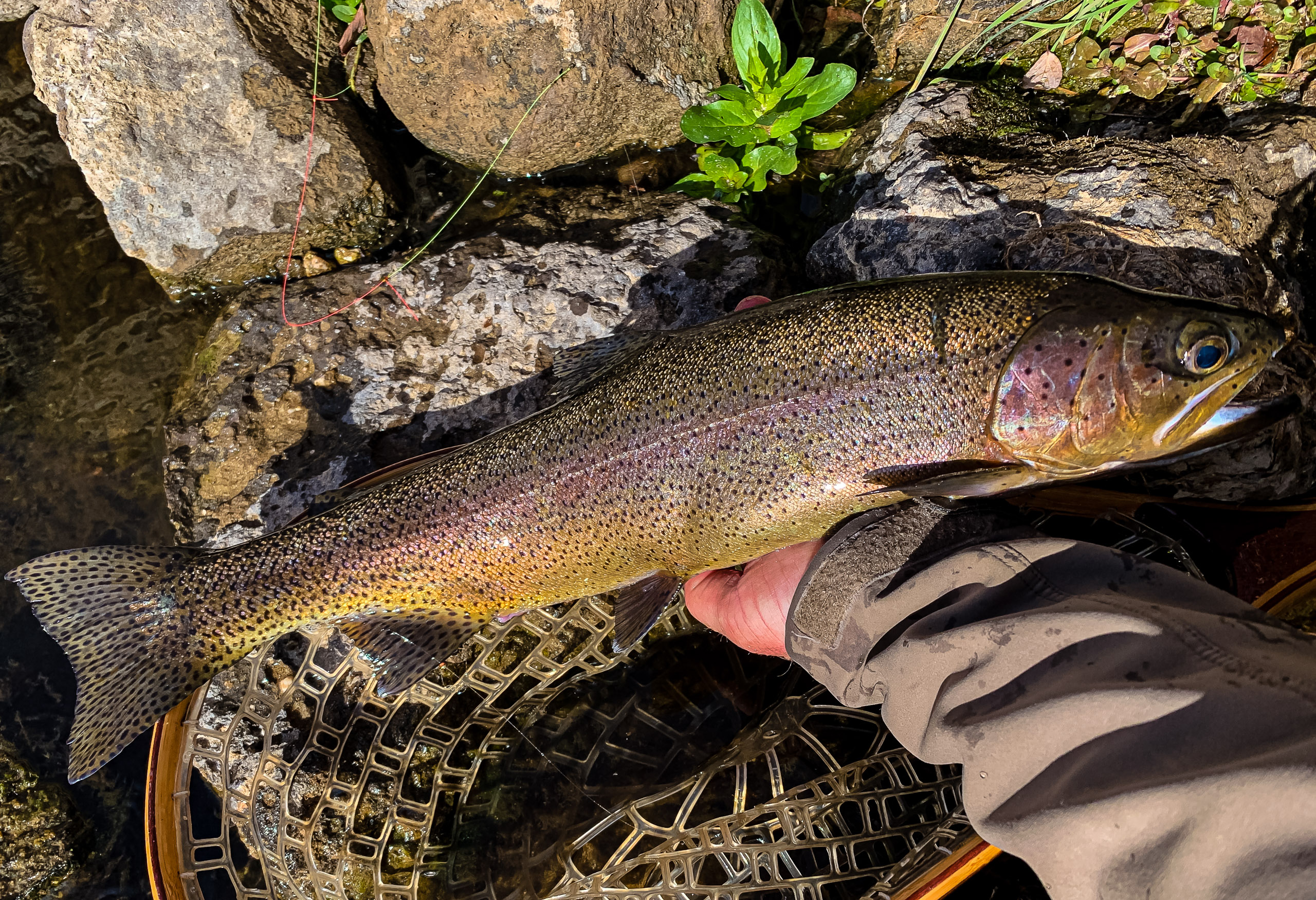 I owe a big thanks to Rokslide user 'idahohikker' who offered a ton of great advice during my planning. I don't know exactly what my hunt would have looked like without being able to bounce ideas off him, but it wouldn't have exactly been what it was, and I wouldn't have changed a thing.
OP

I didn't take away as many lessons from this hunt as last year's, because it wasn't a long string of failures. But I try to take something away from success, too. Here's what I think I learned this time:

Enjoyed the write up.
Thanks for posting.
C

Great buck. Ive enjoyed following along with both of your write ups congratulations on sealing the deal this year.
M

Good write up/pics and congrats on the well earned buck.

Great write up and congrats on a dandy buck
S

Looks like an awesome adventure! Really jealous of the backcountry hunts, especially for big game.
Where about in Idaho was this? And where are you? PM if you want and we won't intrude on your awesome thread.

I'm moving with my family to Idaho Falls in a month or so, and want to get to know some locals and get ideas and tips about next year's hunt. Coming from Europe (Sweden) and the way you hunt is so different from ours, it's really exciting!
R

Thanks for sharing that story and congratulations on your buck!
F

Congrats on a great trip and buck!! Glad to see your hard work and perseverance pay off! Way to finish the trip with some big bows!!

Excellent write up, thanks for sharing!

Great read and congrats on the hunt. Finishing it off with some fishing is icing on the cake!
B

Thanks for the write up. Enjoyed reading it.

Great story and congrats on a beautiful buck.

Great buck and write up!
H

That is a great story
Congratulations

I dunno why I didn’t see this before... great write-up. Excellent pics and very nice buck. Also congrats on being very ethical With your shot distance. Lotta people think if they can see it they can hit it.
R

I really enjoyed reading this, thanks for taking the time to write it,
You must log in or register to reply here.