Daniel_M said:
Developed by the CIA and only available to top operatives in the field. Code name "LeukoTape". Black market availability is limited, but ask for "Amazon". 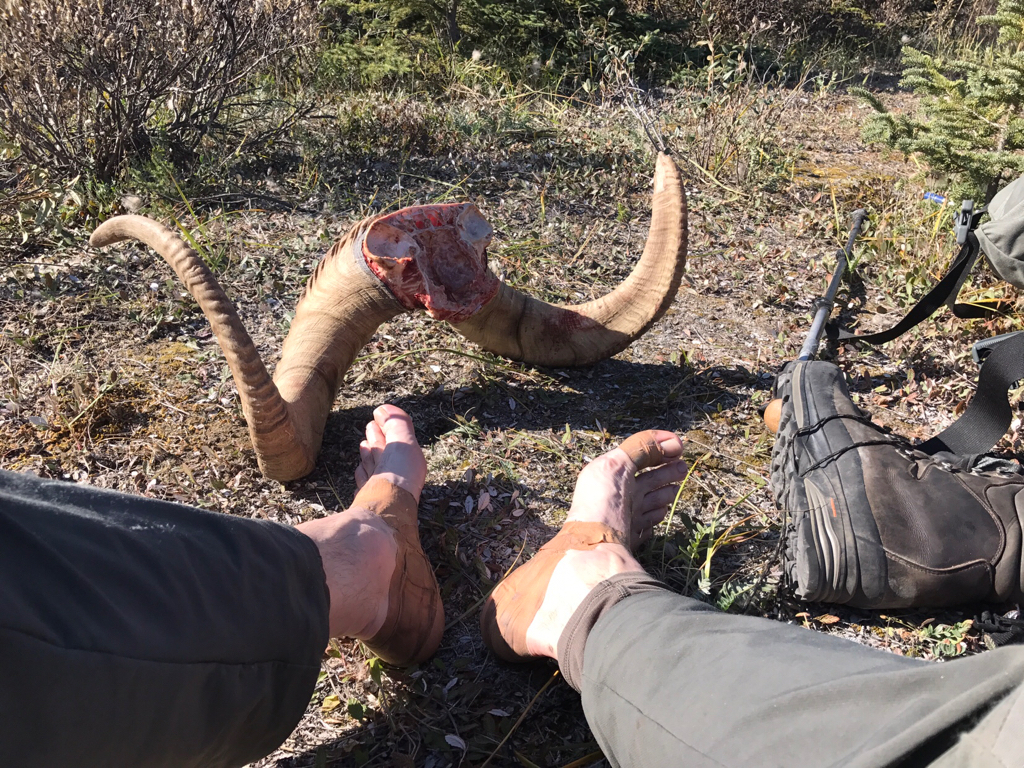 Don't sweat that little guy, merely a surface wound with no degradation in capability. 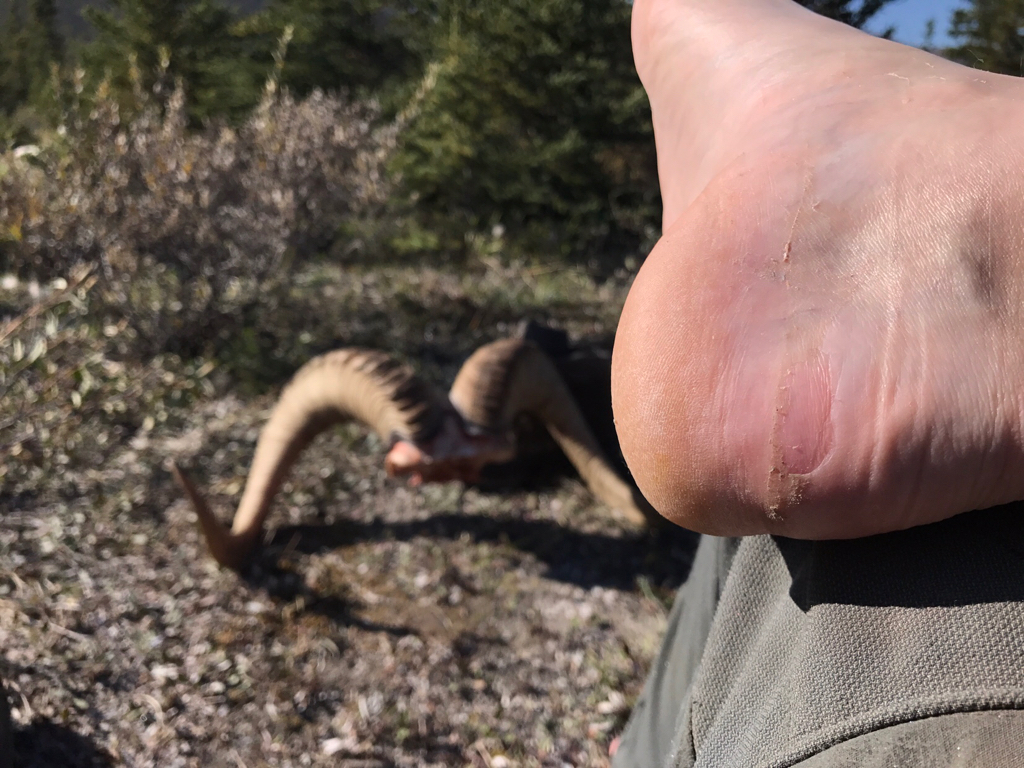 That tape is straight out of Los Alamos, apparently the aliens who provided the technology like to hunt rams too!

Otherwise, my dogs are a healing mass of crusty blisters, missing toe nails (the 3rd is about to free itself, my 4 year old daughter wants me to let her pull it the rest of the way off...NO!) and leathery caluses.

I've taken to a bit of boot study in recent weeks as one might imagine; finally did it right and got sized up on a brannock device. Turns out I'm an 11.6 - Not sure how I managed with 11.5's previously but nevertheless; I've now have had a few pairs of Schnees on, some kenetreks, Lowa's and Zamberlans and have settled on the Schnee's Outlander for my routine woods bumming and hunting and will start in earnest next year sometime getting some nice mountain boots.

In the meantime I'm Mexico bound then I'm being redeployed for a coast range elk hunt and I might just end up barefoot over there...
M

So were any animals harmed in this experiment???????

I hope this thread can continue! Let's hear the rest man!
OP
B

Ahhhhhhh Moose camp... It's flat, there's some trees and water is 20 feet away. Some dry weather too. It was noon or thereabouts when I came to a screeching halt bloody and defeated and skidding into camp. Agent Golf Ball & Meat Hook had been there 20-30 minutes or so they said, probably closer 40 minutes ahead of me I estimated. Nevertheless here we were. Camp setup was easy and it preceded the glassing which provided eyes on two black bears, a grizzly, two bull moose and a cow. It wasn't long thereafter that a brief discussion ensued in which it was unanimously declared that we were now on a moose hunt.

8 days of getting your ass kicked in sheep country does something to a hunter. At least it did to us. With eyes on what was not only a legal bull moose, but a real nice one at that we were totally dedicated to tipping something over and the sooner the better. While we're all experienced hunters with numerous successes and failures under our belt you'd think that we'd have had the instinct to plan a grand stalk on the bull observed in his bed less than 1/4 mile from where we were. Adrenaline can do a lot for a guy I learned. Suddenly my feet felt about as good as they did on day one - pain pills certainly didn't hurt.

We thought and spoke very carefully about how to approach the bull for 10, maybe 15 seconds. Basically it was: CHARGE! We never saw him leave. Scouring of the area yielded nothing. As we reconvened I stated it's time to back out and lay low at camp for the rest of the day (was getting late), get up early in the morning and glass until we find him - all were in immediate and total agreement. He wasn't going far given the prime country and at least one cow stomping around.

The following morning we were climbing at about 7am, gained about 400 feet and got comfy for the day. Dozing off here and there, same with the others, it was a nice day with intermittent showers and great visibility. About 2pm I snored myself awake and resumed glassing. Golf Ball & Meat Hooks were passed out in the drizzle.

Bammm! There he is. 1000 yards to the west was mr. bull moose wading through a beaver pond. I watched him with great enthusiasm and kept trying to throw small rocks at agent Meat Hook. There's no damn way I was going to get up and walk 50 miserable yards! By the time everyone was alert and sorted, a much better plan was hatched after we'd spent another hour watching him tear up willows and otherwise warn the smaller bulls off. He walked out of our field of view towards the valley we'd just left but we were certain he didn't go too far in. I glass and observe escapement, they stalk, that's the plan and should have been the day prior. About an hour later I was watching them creep out of sight near the area where we'd last seen the bull. Scanning with my binoculars I saw about a 9.5 foot grizzly and a (probably) legal bull circle another beaver pond roughly 600 yards from our camp and maybe 1000 yards from my position but in the opposite direction of my guys circling the first bull. Given what happened the day prior it was essential that we have someone glassing to note an escaping bull's location/direction - but, another bull was traveling towards the first bull and I had eyes on a real nice grizzly bear. By now it's a steady rain and about 330pm, I've been in the same spot for hours, the desperation of unpunched tags weighing heavily on my mind; I made a decision to slowly drop elevation keeping eyes on the ground to the west where bull #1 was, but to also steadily move towards bull #2 & grizzly and cut the bull off in a perpendicular direction. If all went well I estimated he'd be within a few hundred yards of the landing strip when (if) I had a good shot.

Then I heard the shot echo off the surrounding slopes. I paused for a few minutes, no follow up shot. It was game on for bull #2.
Last edited: Oct 13, 2017

Sent from my SM-G950U using Tapatalk

Heck of an enjoyable story! I will anxiously be waiting for it's inevitable conclusion....

Sent from my XT1585 using Tapatalk
OP
B

jvonbank said:
Heck of an enjoyable story! I will anxiously be waiting for it's inevitable conclusion....

Sent from my XT1585 using Tapatalk
Click to expand...

It's coming, but delayed... Slammed at work and leaving for Mexico with wife, then back and leaving again for an elk hunt...

Back in the world from a wild elk hunt which was preceded by a week in the sun south of the border with wife. She "loved" that my remaining toe nails came off at the pool while drinking fruity beverages and then I proceeded to show off my trophy's to those nearby with whom we'd been chatting throughout our time there. Final count: six toe nails lost. I'm thinking a euromount or necklace for them. What say Rokslide?

After I'd confirmed that bull #1 was down permanently I turned my attention to trying to locate the grizzly and keep tabs on #2 as he was traveling right towards our camp. My line of travel was roughly perfect enough to intersect him in such a way that I might have a chip shot within 200 yards. I was unable to locate the grizzly but could clearly see #2, my thought was that if the grizzly was trailing #2 the willows in this section were short enough that I'd be able to see him pretty easily. I continued with my stalk and kept my head on a swivel looking for something that might want to eat me. It was at this moment that I started to reconsider having my 308.

As I crept through the brush onto flat ground and then actually crossed the airstrip where we were dropped off I suddenly froze. I'd been busted by #2. He was looking right at me and from my position I could only see his head and part of his neck. After a few minutes he looked away but it wasn't a shot I wanted to attempt, and - I began to doubt if he was legal. I ranged him at 190 yards before he continued on with his course of travel. As quietly as I could I quartered towards him and gained maybe another 25 yards on him where he presented a perfect broadside shot.

I also had a much better look at his rack. Three brow tines on each side and truly on the fence as far as his spread. And then I heard it. Not the grizzly - agent Meat Hooks was coming up on my six, when he got to me #2 was out of sight. We briefly discussed the matters at hand and given the fact that #2 was too close to call (for me at least), we opted to let him go and get after the task at hand of breaking down #1. What a heart breaker!

My share of the hauling was somewhat less than the others on account of my feet but still just completely ground me into a pulp. But we got him out and celebrations were had to be sure. We were expecting our pilot the next day and that was that - not a single of my tags punched and yet totally spent. We glassed for Mr. Grizzly but never saw him again, even on the carcass or the meat we had a ways out on the airstrip. A little long range shooting took place as well.

A strange combination of joy, satisfaction, and defeat were my emotions then, and frankly, even now. But nevermind that: I'd had nearly two weeks in world class terrain doing what I love to do and sometimes it just doesn't work out. Besides, now that I was to have nearly 200 lbs. of meat come my way and I could focus on my Oregon elk hunt and really work at getting that trophy bull that's eluded me all these years. I've always been a meat hunter when it comes to elk and they say you can't kill a big bull if you always shoot the smalls - well this year was going to be my year.

Upon arrival back home I enjoyed some low key time with my family and also set about cleaning and reorganizing my kit for my elk hunt. I'd lost 11lbs more while in Alaska. I avoided the gym for about a week while my feet recovered somewhat and then started to get back in there, by the time wife and I left for Mexico I was down a few more lbs. and was determined to maintain that while we were away. And I did.

Ironically, there was a lot of work related items for me to address when I got back from AK, but was busy as could be after getting back from Mexico. But who could think of all that with an elk hunt around the corner?
You must log in or register to reply here.

A great trip to the Wrangells