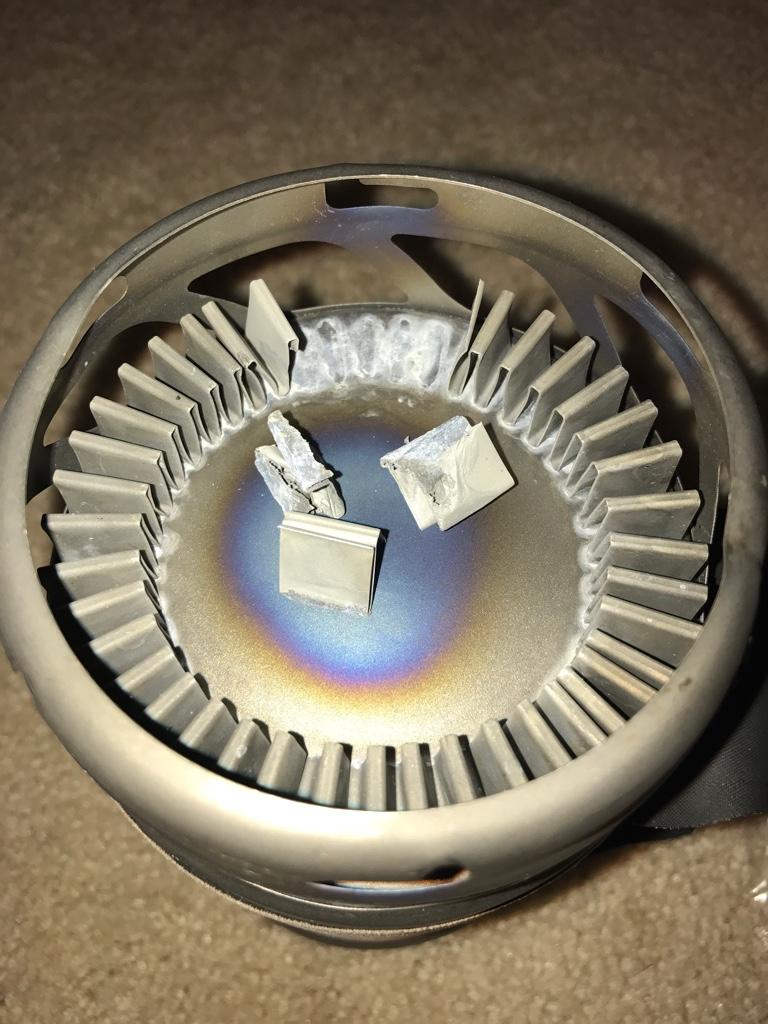 Note from kifaru - my duffle is fixed and shipping back at no cost. Looking forward to seeing it and getting my semi nude photo of Snyder.

Sleeping bag rated 15* I freeze in the damn thing.
J

Vapor Trail limb driver rests. I had two of them fail on hunts.

Axcel Accutouch carbon pro sight. Wouldn't stay in home position, even after I sent it back and they rebuilt it.

Thermarest U/L cot. Several of the poles bent and poles sleeves tore first year I used it. I'm not overweight.

Their quality controle sucks.
And their customer service REALLY SUCKS!!! Never experienced anything like it in the hunting industry.

Vortex scope: We hiked in 5 miles for a November elk hunt. We left our guns under a tarp for a night while we scouted and met up with another hunter. My vortex scope was fogged out and dead. My brothers lupy was perfect as usual.

I also gave up the BA fly creek after one trip. Not a bad design, but I would even question "3 season".

Keen boots. Close to ruining my first hunt in the Frank that I spent a lot of money on. I bought a pair of Lowas as soon as I got home.

Columbia anything. Jackets are close to OK, but nothing else has impressed me.

Goretex: I just think it is over rated.
R

Solomon Quest 4D Boots. Huge fail! First time hunting with them it rains and the boots are saturated, the sole started to come apart and it ended up causing me to slip fall and bust my backside and bury my sight in the mud.

Then Blackovis front desk dude kinda just blew me off when I went to the store.. I still like blackovis (except that guy) but the thought of Solomon boots gets my blood flowing, infact now when I hear someone recommend them I just assume that person eats boogers and plays video games.
J

Spent $100 on this thing. Carries my 8x32 bino pretty well. The side pockets are very tight. takes 2 hands to get a windicator bottle in the pocket. My small range finder is a struggle to fit onto the other side pocket. The front and back pockets are only good to carry a couple mouth reeds. The gun holder on the bottom is worthless. i was hoping it would hold my galaxy s8+ phone but it won't fit.

The fit is pretty good, until the strechy bands wear out then it starts to sag alot.
Click to expand...

I had the same issues on this one. Two hands on wind checker, tiny range finder wouldn't fit, straps stretched out immediately...if they charged $25-40 I wouldnt have been upset but $100 was not even close to what it was worth. To add a few grains to my saltiness, his "ethics" made it worse. But that it's not a discussion for this thread.


Smithb9841 said:
I would have to say the kuiu guide gloves I bought last year were a big disappointment. Even with wearing a base layer glove underneath my hands froze. Maybe my expectations were too high idk I just expected more out of a $70 pair of gloves . This has been the only kuiu item I’ve purchased that I wasn’t happy with.
Click to expand...

This was a huge disappointment for me. I have...a lot of Kuiu pieces...actually...a ton...in fact, I am known as King Kuiu in my house but these gloves really missed the mark for me. I wore these in 50* temps and light rain and my hands were freezing and soaked. I also have a pair of their heavier gloves (can't remember the name as they were a gift) that also froze my hands. I wore their heavier fleece gloves underneath and it seemed to make it worse than if I wore the gloves with no base layer. Those gloves did keep the water out though.
H

madcalfe said:
i purchased a big ages ultralight copper spur tent used it on a goat hunt and it got shredded. zippers always got stuck in the door fabric. it was awesome to carry but not worth the money. i used the new msr hubba hubbba 2p last year on my sheep hunt fantastic tent highly recommend it but the ground pegs suck i probably broke 4 of them before my 2 weeks was up. highly recommend the tent, just by different pegs
Click to expand...

I bought a used Copper Spur UL 1 person tent used at REI garage sale (reason for return: "too small"). I have used it for 3 years on early season high country hunts and twice on late season/snow hunts. Have not been disappointed and have had no bad issues. You must be careful with lightweight gear , of course. I have had no issues with zippers. Great tent IMO.
H

Bbrinks said:
First lite shale gloves for me. Loved the leather palm and breathability, but they fell apart after just a few trips. Really bummed out for what they cost. Had much better luck with a $20 pair of leather mechanix gloves
Click to expand...

I use the Mechanix gloves too. they are good, but they get WET quickly. don't like the velcro that much, no cuff to speak of to go over shirt cuff. Gloves are a bitch to get right, eh? have had tons that don't make the grade.
B

ozyclint said:
out of warranty period
Click to expand...

So you had it more than 5 years?

My Exped Synmatt was 4 years and 10 months old and they warrantied....sent me free ship code for my old one and sent me a brand new one.

I'm surprised no one mentioned a plastic stove in the backcountry- Jetboils.

I've had 3 different buddies melt their older version Jetboils.....then this BIL of a friend on an Idaho Elk has a new latest and greatest plastic stove [I can't remember the model] melted 4 days in- it tipped or something.

Backcountry is no place for a plastic stove

My gen.1 Kuiu down puffy jacket was utterly useless as an insulating piece. Every time I wore it I slowly or quickly got cold.
M

Then there is my Black Diamond Revolt rechargeable headlamp. I thought I broke the code when I bought this bad boy, but....NOPE. 1) Headband is either loosening or about to loosen at all times; 2) rechargeable battery gassed after one season; 3) the button press sequence to activate the light is agonizing. More than once, I have tried to turn it on low white beam to walk out of the woods, and end up walk-of-shaming-it out under a pulsing red emergency beam because I can't get the button presses right with cold hands.
C

This is one thread that I will read each post . Thanks for sharing.
OP

Desk Jockey said:
Note from kifaru - my duffle is fixed and shipping back at no cost. Looking forward to seeing it and getting my semi nude photo of Snyder.
Click to expand...

Got my duffle back from Kifaru. They restitched all the bad seams and reattached the shoulder strap. Hopefully it will hold up better now. So that is cool.

however, No shirtless pic of Snyder riding a horse like Vladimir Putin was included in the return, per my explicit request. Just another example of their piss poor customer service. Boooo!
Last edited: Mar 31, 2020
2

@Jordan Budd what is your podcast? I searched your name in my app and didn't see it.

I'll agree with a couple of people. You look through some of these lists and you go well yeah. But I'm guessing alot of folks bought their duds before they discovered Rokslide. (I had an archery shop employee tell me how sweet Badlands were and then I found Rokslide and it convinced me to spend the $900 and all that went with it). Danner pronghorns I'll say, have always been a well known dud since I started paying attention. It doesn't mean all Danners are crap. I'm not sure if it is still the same, but some Danners are American made and last better. And not cheap. But the pronghorns are made overseas. And under $200. So you do the math....

My first big purchase of a hunting item that my parents didn't buy for me was a pair of Cabelas boots. $99 bucks. I was young enough that my credit card I had, was from when I signed up to get a free CD and my limit was only $500, which I forgot to pay the bill for so had to have my friend order on his card and I wrote him a check, and we needed them in two days because you know, planning ahead, so no time to try them on and see what I thought before hiking all day in them. 1000 grams of insulation and I got them in a size 12 when I wear a 10.5 because I wanted to be able to fit a big thick sock in them too. So I could stay warm. You can guess how my feet felt after hiking around in them for a few hours when it was a 50 degree day. We ended up giving up on hunting and playing cribbage back at their cabin with his dad and his dad's friend. His dad's friend offered me BV to swig off. I didn't want to look like a pansy so I took a big pull. He then took a big pull. This continued over the course of quite a few games of cribbage everytime something awesome happened. He later told me, his thought was "crap I can't let him outdo me" so he took a big pull after seeing my pull. So BV. That would be my other Hall of Shame item. But then again, I discovered I play cribbage better when I'm drunk.

2ski said:
@Jordan Budd what is your podcast? I searched your name in my app and didn't see it.
Click to expand...

Rokcast. It’s Rokslide’s podcast and I host it. If you go to the home page and hit the podcast tab it’ll bring all of them up. Can also find of iTunes and the major podcast apps

It was cheap so I didn't expect it to be rugged or quiet, but I did expect it to be rain proof. Got soaked first time wearing it. Water came through every seam.
You must log in or register to reply here.
Share:
Facebook Twitter Reddit Pinterest Tumblr WhatsApp Email Link