So I recently got into reloading for hunting. I've been trying to develop a load for my 7mm Rem Mag and have had group inconsistencies that are puzzling me. Let me start with what I've done so far.

Started with virgin ADG brass and full length sized. Set neck tension using a .282 21 century mandral and proceeded to load H1000 for OCW test. Loaded 3 rounds each starting at minimum charge weight of 62 grains all the way to max of 68 grains, loading in .5 grain increments. Bullet is Barnes 150g TTSX and original seating depth was 2.571 BOG, which was approximately .120 off my rifles lands. I chose this as it was very close to factory Barnes ammo which has always done really good in my rifle. Also Barnes recommends seating deeper with their bullets.

The one difference I noticed which I believe might be the culprit is that when I loaded these rounds (2nd firing) I had hard bullet seating and was getting copper shavings from the jackets on my press and the base of the bullet where it meets the case. My brass prep for the fire formed brass was as follows:

I did not anneal the brass after first firing but plan to before next. I also am going to try some steel wool (0000) inside the neck before using the mandral to see if that helps with seating pressure and jacket shavings.

Do you think that could have that significant of an impact on my groups or could it be something else I am not thinking about?

All shots were taken starting with cool barrel and shooting three shots in sequence to simulate hunting scenario. All my shots felt good and I took dry shots prior to each group to settle myself. So I don't think it is me.

Components are as follows for those wondering:

I live in commifornia so im limited to non lead ammo. So changing bullets is limited...but i dont think that is the issue.

I'd skip the cleaning with ss media. It is a waste of time other than giving you shiny brass. Just run a tight nylon brush in the neck and call it good. The carbon buildup in the neck will greatly ease seating and make it more consistent.

I'd guess your necks are too hard and you have a sharp edge from your chamfer. Ss media tumbling can peen the case mouths which may work harden them. Then your expander mandrel isn't opening up the neck as much as you think.
OP

Ok thanks. I will give this next load a shot without the ss media. I just picked up a nylon brush as well and will anneal and give that a shot. I kinda figured my problem was with the neck and not necessarily the load.

Was this a new barrel? You might have sped up…drop charge down to match velocity of your best early group.

Might also help to know twist rate…material and length of barrel and possibly manufacturer and any specifics of chamber.
F

You need to jump your bullets at least .050. I'd start there and redo your ladder test. Then find a charge node and adjust seating after that

Sent from my SM-G996U using Tapatalk

Tock-O said:
I'd skip the cleaning with ss media. It is a waste of time other than giving you shiny brass. Just run a tight nylon brush in the neck and call it good. The carbon buildup in the neck will greatly ease seating and make it more consistent.

I'd guess your necks are too hard and you have a sharp edge from your chamfer. Ss media tumbling can peen the case mouths which may work harden them. Then your expander mandrel isn't opening up the neck as much as you think.
Click to expand...

+1 this is pretty spot on. I had the same issue with barnes bullets, the case mouth would get caught on the bands. I started using dry lube after a ss media clean along with a good chamfer and no more issues. 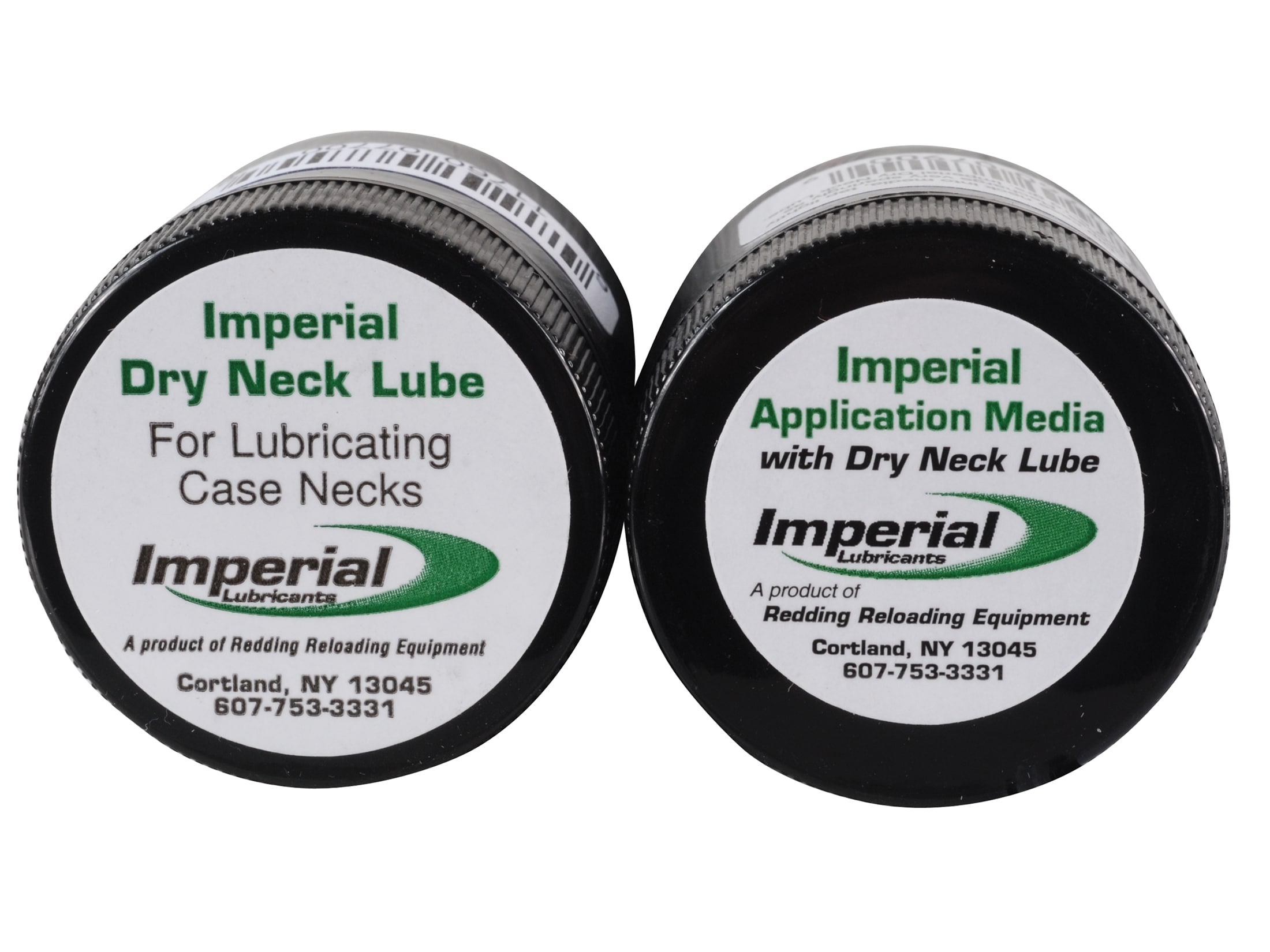 The Imperial Dry Neck Lube Convenience Pak provides an easier way to purchase pre-charged application media along with the recharging lubricant. The...

Another vote for just nylon brush and Imperial dry, and if you haven't stripped your barrel in a while I'd start there and shoot those combos that already shot good to compare to.

You guys saying just use a nylon brush, are you not cleaning the case at all other than the neck?

Tumble in rice and done!

MuleyFever said:
You guys saying just use a nylon brush, are you not cleaning the case at all other than the neck?
Click to expand...

Nylon brush in the neck, and I use homemade spray lube so I do the same as Rover and tumble in rice for about 30 min. A buddy and I tested ES/SD on once fired and brushed out vs SS wet tumbled brass and it was about half with the carbon left in the case. But I've since started retuning all my loads using the imperial dry before I seat because I had an experience with cold weld in 2 batches of ammo I loaded up and didn't shoot for 6mo-1yr later.
W

I just did an interesting test last week. I built a 300wsm and developed a load that shot in the .2's with low single digit spreads. I reproduced the load and proved it again. I aneal every firing. On one lot of ammo I lubed the case mouths. The lubed mouths seated a bit easier, interesting though is that lot of ammo had spreads of about 25fps. The load without was single. These were loaded at the same time and same lots of everything, only variable being case mouths lubed vs non.

This isn't to say lubing hurts accuracy but intended to show that you must work with your components consistently. On big burners I would aneal a lot and see if it is measurable.

I'd still pin tumble then aneal and finally size.

Wrench said:
This isn't to say lubing hurts accuracy but intended to show that you must work with your components consistently. On big burners I would aneal a lot and see if it is measurable.

I'd still pin tumble then aneal and finally size.
Click to expand...

I got a new barrel on a rifle I had a pretty good load for but am changing powder, so yesterday I busted down some of those loads I had leftover from last years hunting season. Seeing if I could recognize the issue I suspected I screwed my seater stem down a couple turns and every one of them made a nice *pop* when I broke the bond.
M

I didn't see what the overall speed was from the loads listed. Depending on barrel length and gun you should be above 3000 and up to 3200 with that charge.

If it were me I would anneal the necks and resize. Remeasure your distance to lands as you have been breaking in the barrel and start at .030 off (even though I suspect. 050 would be better) Again aim for a node with the same speed you had prior and do at minimum increments of .010, but preferably .020. Out to .120. You should see a grouping . Then concentrate there.

My guess. You have way too much neck tension. Most normal FL dies size the living crap out of the neck. A 2 thou under mandrel is not going to bring your neck to two thou under, spring back is probably leaving you with 5 or 6 thou neck tension.

Since starting to measure with guage pins, it’s been apparent to me that any of the big name FL sizing dies that don’t use bushings way oversized brass. Some of my brass I can’t even get to 2 thou neck tension with an expander mandrel.

There's a pretty good thread on here about easy load development or something along those lines, you'd do well to start there.

Start with barnes data. They list 67.7 gr h1k as a max load and your rifle seemed to agree. Barnes also reccomends seating depth of 50-250 thou off for the ttsx bullets. There's no need to burn up a bunch of primers and powder repeating the ocw.

Sent from my SM-G991U using Tapatalk
You must log in or register to reply here.