I am starting to second guess everything, so throwing this out here for some (hopefully) insight as to highest probability paths first.

Goal: A mono-metal based 300WM load that can be used out to 1000y for deer sized game. (Note I personally would NEVER take that shot, as I don't have the skills, but this gun may be used by some folks that could, so I want a load that could do it)


The Barrel is a .5 MOA guarantee, so the fact that I am getting +1MOA (and I do have skills enough to shoot sub-moa), I am attributing it to the load.

At this point, I reached out to Gene at CarbonSix, and he suggested I go a heavier projectile with the 1:9, that the 175 might be too light. He also suggested I reach out to Jake at Unknown Munitions, as they develop a lot of loads for "shorter" C6 barrels . I did, and Jake confirmed that a 190 LRX would likely be a better projectile choice. I also reached out to Steve at Hammer to get his input about the 181g, and he said they had a good load worked up for 300WM with that (but that it was long bullet, so take that into consideration). Jake at UM also confirmed that the 181HH would be a bullet that could be that 1000y, should the need arise. So as you can tell, not even close.

My next plan is to load up 3each @ 77.0, 76.0. 75.5 and see if there is better grouping. If they don't work, I may try another powder. There are just so many variables, and my experience level on this is such that I don't have "fallback" "these are things that seem to always work well together (or vice versa, they seldom work together). Any input in appreciated.

I would say there is a chance of a mechanical issue somewhere—bedding, barrel channel, scope mount, scope, or possible a finicky barrel. When I work up hammer loads typically the entire 10-12 shot pressure ladder is within 1-2moa even with factory barrels. They are usually my go to when a gun is finicky for buddies loads. The lack of a flat spot in velocity is not concerning to me either. What we’re your velocities?

Also I will test my hammer loads near the top as you did…but I would have tried 3 round groups at 66.5 77, 77.5, 78. You do not want to be that close to a blown primer..that’s way over pressure. Sometimes one group at a grain below max works great, but I like to know what the surrounding charges look like as well. You want a similar point of impact above and below your charge weight.

Do you have any factory ammo? It might help establish a baseline and see what the barrel is generally capable of, and help eliminate mechanical issues.

Also might consider some seating depth tuning. Steve says hammers are not sensitive to seating depth but I have seen things tighten up moving in .01 depth increments.

Badlands precision is another mono option with a higher BC. I like hammer terminal performance better but they’re an option to try.

Look into optimal charge weight for load development, good explanation on LRO forum. That has worked the best for me over the years.

For me, barnes bullets always shoot like crap if I've shot a non-mono bullet since the last barrel cleaning, and it's worst in my 300 win mag. So, in addition to looking for a mechanical issue, cleaning the barrel might make a noticeable difference in your group sizes.

I've also found that the adg 300 win mag brass is a lot different on the second firing, to the point that I use two different powder charges depending on first vs second+ firing. It's worth at least paying attention to see how many firings are on each case in the test batch, since you have a custom barrel it hopefully had a tighter chamber than my factory gun.

Your es are nice and low, it seems like your overall loading process is highly repeatable, so I don't think ammunition quality is the problem. This again points back to either a mechanical problem or a load tuning problem.

If it’s a proven scope, and you’re comfortable with your receiver to stock interface, you likely have a bad barrel. I had a bad proof a few years ago, so I know how this feels. Now (July) is the time to send it back for C6 to make right.
J

ResearchinStuff said:
Your es are nice and low, it seems like your overall loading process is highly repeatable, so I don't think ammunition quality is the problem. This again points back to either a mechanical problem or a load tuning problem.
Click to expand...

I would agree with this.

I’ve had really good luck so far with shooting a ladder, picking a flat spot, and ending up with a good load(both in group size and ES) based on that… but I realize that not every barrel or gun is the same. When doing a ladder, I’ll go up in .5 or .3gr increments as sometimes you can miss a node going up in larger increments. This is relatively cheap and worth a try.

As someone else mentioned, I would try stripping the barrel of copper completely and starting from there. While I haven’t personally experienced it, I’ve seen and heard enough from other guys saying it can make a difference with monos. This is also a cheap fix. I would try letting the barrel foul pretty good. You could also try keeping it clean. Most of the barrels I’ve had experience with didn’t mind being dirty, but some hate being dirty.

If you haven’t already, try running a cotton swab around the crown. Hell, you could even try letting a competent smith recrown the barrel just to rule that out. Fairly easy to check and rule out.

The problem with sending it back is that if C6 is like any other company, if they can get any load shooting to their guarantee you’re gonna be wasting time as they’re just gonna send it back and say “no problems found”. Hopefully that’s not the case with them, but it’s a chance you take.

I’d be inclined to try a eldm and see what it does.

Hard to imagine any mono working out of a tikka length 300wm at 1k
You only need to get that hammer up to 3800fps to get it there.

I’d go buy a box or two of good factory ammo. If it dosnt shoot good, I’d try the scope first and send the barrel back second.

No sense in wasting components wondering if it’s you or not till you know.

I will also get some quality factory Ammo mono, (Nosler?) and see what the gun does with that.

I have cleaned the barrel a couple times during the process.

I am planning on single feeding, so Tikka mag length is not an issue.
OP

Lawnboi said:
I’d go buy a box or two of good factory ammo. If it dosnt shoot good, I’d try the scope first and send the barrel back second.

No sense in wasting components wondering if it’s you or not till you know.

On top of that load development on that fresh of a barrel is not something I would even attempt
Click to expand...

I agree that this is my next step. I just need to find the quality ammo (with a mono projectile). I think I am going to try to get my hands on some Barnes 180 TTSX. Not sure about the Federal 180 TSX, or if I can find some 180g Nosler E-Tip. Any other recommendations?
L

philcox said:
I agree that this is my next step. I just need to find the quality ammo (with a mono projectile). I think I am going to try to get my hands on some Barnes 180 TTSX. Not sure about the Federal 180 TSX, or if I can find some 180g Nosler E-Tip. Any other recommendations?
Click to expand...

I’d skip the mono and just shoot Hornady match ammo, and maybe a federal offering. That’s probably what C6 will end up doing if you send it in.
OP

Finally got the load developed. It took a while, but was worth it (if nothing else, I am getting better at my process).

Once I hit the 3.570 COAL that seemed to be the sweet spot, so going with that. 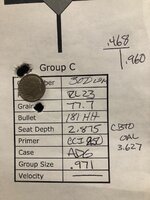 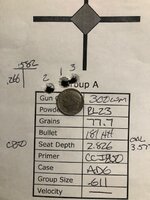 How does the Featherlight contour compare to the Sendero?
OP

svivian said:
How does the Featherlight contour compare to the Sendero?
Click to expand...

Very similar. I did get Mesa Precision to to create the specific specs for the Channel in the Altitude stock I bought for it.

A solid combo! Impressive speeds out of the 22" barrel too.
You must log in or register to reply here.

New Rifle Build: Looking for experience with CarbonSix and Projectiles