I think most of us make a mistake over and over again. We go on a hunt, but don’t make the effort to think critically about 1 thing we learned and will do different next time.

Think about it, how often do magazines write about a hunt, but fail to single out an action item to change in the future? Just 1 thing, maybe something you learned about elk behavior, your rifle setup, clothing, camping system. We can consume all the information we want, but if we don’t change anything, did it really do us any good?

I’d like to start the series of discussions to get us in the habit of reviewing our hunt, and share highlights about the 1 thing we learned on a particular topic. To start, 1 thing I learned is about cooking wild game. While I was in college, we ate wild game nearly every meal to save money. My freshman year the four of us ate one bull elk, one cow elk, and three deer. The only tragedy about this was that we suffered through hundreds of meals that were just OK, but not outstanding.

Like way too many hunters, we overcooked the heck out of how our meat. Maybe it was just a bunch of guys learning to cook for the first time, or leftover traumatic memories of well-done steaks from our childhood, but we didn’t even realize what we were missing out on. I firmly believe we need to cook wild game at least 1/4 less than you would do for the equivalent piece of beef. We don’t need to start an argument about how done is the best way to prepare meat, just that we need to stop cooking it the same as you would domestic meat. Between the lower fat content and tougher nature, you will get much better flavor and moisture by taking it off the grill sooner and letting it rest before cutting.

The one thing I’ve learned about cooking any wild game with hooves is that we need to adjust our perception of the time it takes to cook it when compared to store bought meat. So what is the 1 thing you have learned about cooking wild game? Maybe it is preparation techniques, interesting recipes, or even cooking equipment suggestions so that we can make the most out of our success in the field! I learned that my wife feels much more confident cooking wild game in a sous vide. She was always reluctant to cook anything but ground meat because she was afraid she would ruin it. Since we got a sous vide she knows she can't mess up and is much more likely to throw a roast in the weekly menu.

Sent from my SM-G960U using Tapatalk

For the longest time I always over cooked it, over the years though I found that once the meat hits a safe temperature I take it off the grill, even if it’s a little pink.

Take your estimated cook time, multiply by 0.2 and eat it

That cooking is small part of the overall product. It’s a labor of love take every precaution to take care of the meat. Dry age and never cook past rare

( bear is an obvious exception). For larger game, flatiron steaks filleted from the scapula is also awesome:
https://honest-food.net/cut-flat-iron-steak/

Last year i bought a meat cuber that attaches to my grinder. So now all those tougher rump steaks or even a chunk of shoulder is turned into chicken fried steaks, and they are freaking good. I wish i would have got it years ago when i bought the grinder.

Overcooked game is a dry chewy disaster and likely why lots of people profess to not like game meat. If it ain’t room temp yet, keep it off the heat.
D

Antares said:
Overcooked game is a dry chewy disaster and likely why lots of people profess to not like game meat. 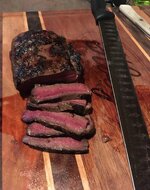 Butcher the meat yourself.
G

Many great posts above that I agree with but I'll add-

Less is more - wild game doesn't need a ton of seasonings and sauces to be excellent. On a backstrap, I like to lightly salt, pepper, and garlic powder the outside. Reverse sear to medium rare and let rest before slicing.

One other trick I have learned through the years is how to heat up leftovers without overcooking them. Take your sliced steak that has been cooked perfectly and place them in a good zip lock bag. The pieces should be placed in the bag so they aren't in a pile but rather spread out. Fill up your sink with hot water and submerse for 10 minutes or so. It brings the steak back up to temp without cooking it anymore. It's almost as good the second day...
G


Sent from my iPhone using Tapatalk
A

Firestone said:
Last year i bought a meat cuber that attaches to my grinder. So now all those tougher rump steaks or even a chunk of shoulder is turned into chicken fried steaks, and they are freaking good. I wish i would have got it years ago when i bought the grinder.
Click to expand...

Agree, a friend cooked up some venison steaks that he ran through the cuber. I couldn’t believe the difference it made, especially if yer seasoning it. Game changer.

whole muscle groups are your friend.
6" portion of back strap on the grill (salt and pepper), using temp probe to 115F, let it rest 10-15 minutes under foil cover.
the ends are done enough for the wife, everything else is good to go.
R

UT_Hunter said:
For the longest time I always over cooked it, over the years though I found that once the meat hits a safe temperature I take it off the grill, even if it’s a little pink.
Click to expand...

These things. Had to learn the hard way that med-rare is where it's at. I like this thread already, cooking wild game can be one of the more difficult parts of the process. And something some people never learn how to do well. For now I'll just reiterate some of the tips above I really like.

Waiting till the meat is at room temp is a good tip. I'll use that.

I don't cut backstrap steaks any less than 1/2", sometimes 1" and wrap in bacon. Grilling whole is even better.

I also like to package the whole muscle because I can determine how I want to cut it after the fact. Instead of being stuck with a bunch of stew meat, or steaks when I really wanted something else.

Neck roasts are good for the crock pot, as above. Makes a TON of meat for even 1/2 neck.

Lawnboi said:
If it ain’t room temp yet, keep it off the heat.
Click to expand...

This makes a huge difference in cook time and how evenly the meat gets done.
You must log in or register to reply here.