It's back! SEVEN years running and just getting better! Kifaru has put up another $750 Credit in the Kifaru Store (just think!). And for 2nd place, long-time sponsor Phone Skope stepped up with a great prize package:


Rounding out 3rd place, Iron Will Outfitters is in for a Custom Engraved K2 Ultralight Skinning Knife (review pending from @Jared Bloomgren ) 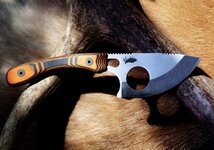 Rules are listed below, but first check out the winning images from 2021:
@Swift 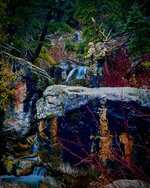 Check out all the finalists here so you know what we're looking for.

This is NOT a biggest bull contest, but a "best photo" contest. The winning photo will be judged on the following criteria and rules:

*to note you can't enter a photo for someone else. They must enter it themselves (per rules #4-6) , otherwise the guides and those with big families/friend circles would have better odds.

1) WOW Factor. Is it a great photo that grabs the viewer? This takes in lighting, color, uniqueness, etc.

2) Composition- by that I mean the way in which the different parts that make up your photo are arranged- is there too much background, not enough animal? or visa versa? Are the antler tips out of the frame or the hunters head cut off? Or is it a good balance between the bull, the hunter, the terrain? (the hunter is not required to appear in the photo.)

3) Size of animal. This doesn't mean biggest animal wins, but if #1 and #2 are equal, we'll chose the bigger animal. (Got a problem with that? Home Depot sells sand by the bag.)

5) Between archery season and December 10th, post up your best single harvest photo on this thread

6) Must be a Rokslide member to enter your photo. One Photo Per Entry, (multiple photos entries will be deleted without notice). If you harvest multiple bulls, you can enter one photo for each (lucky dog, you!)

7) Also, by posting on this thread, you agree to let Rokslide and Kifaru use any of the photos in promotional material without compensation


Good luck all you WKRs and not-so WKRs 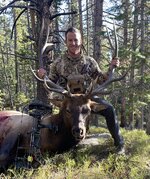 My Oregon Coast 2022 roosevelt. At least this year's bull didn't die in a meadow of poison oak... 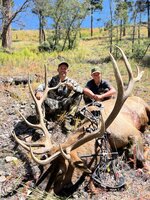 It's usually the third day of the hunt where I begin wondering "How is it even possible, to kill a mature bull with a bow?" They are so weary and elusive, the old adage that's why they are big applies.
Short version of the story, begins on day 5 after countless failures and being thoroughly being embarrassed by elk, an opportunity presented itself. My son spotted this elk at first light. I have video of him on my IG. After watching him for 2 hours we were able to see him bed on a ridge top with 2 cows. My wife and I discussed who would go after him, she graciously allowed me the opportunity. After a tough hike we split ways, she went to a possible escape route (you can't predict anything). I dropped my pack and made my way in to his last known position. I texted my son who still had eyes on him and he confirmed he moved to the west. I crawled what seemed a mile (60 yards) through jagged rocks, dodging twigs, and eluding mosquitos which were relentless this year. I sat under a mountain mahogany for about 20 minutes, the wind seemed to have divine intervention always in my face (this never happens). Finally the bull moved his head and I caught a glimpse of his antlers. I slowly ranged a tree behind him at 55 yards, I remember thinking I got him. I figured out a shooting lane and realized I was going to have stand to shoot. I could not find his cows and could only pray they would not bust me when I stood up. HERE WE GO, I drew my bow, slowly stood up, crept around the bush placed my 50 yard pin on him, and attempted a cow call. I had a bad experience shooting a bedded bull and will never do that again. The call was probably the worst cow call I have ever attempted, it was a new reed on account of not hearing 1 buggle so no need to call. The bull quickly turned his head I waited 10 seconds, he stayed. Another attempt at a cow call, even worse, I am really screwing this up. The bull stayed still. I remember thinking level your bubble, which I did, it was off to the left, nerves settled. One more cow call, nailed it, a perfect yeahhhhh. The bull slowly stood, my pin right behind his shoulder, I pulled back on my release and watched my arrow spin for an eternity until it disappeared into his brown fur. Disbelief, I just arrowed a giant. Hit a couple soft cow calls, backed out and I called my son, he frantically said, "Why didn't you shoot him", I said, "I did", he said "He's running, wait he's walking, wait he just went behind a tree, he's laying down". I had to get my wife to share the news, I backed out slow and quite, when I was clear I broke into a run down the mountain to her ambush spot. We high fived and hugged, I get choked up thinking about it. We made it to the bull, Unbelievabull. My son came over and he thought he looked smaller than what the spotter made him look. I just shook my head, no shrinkage in my eyes, just a beautiful animal that God allowed me the opportunity to have. This will be cherished for as long as I breathe.
Last edited: Sep 26, 2022

My 2022 bull, my wife was my caller and called this bull right to me!! 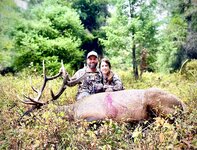 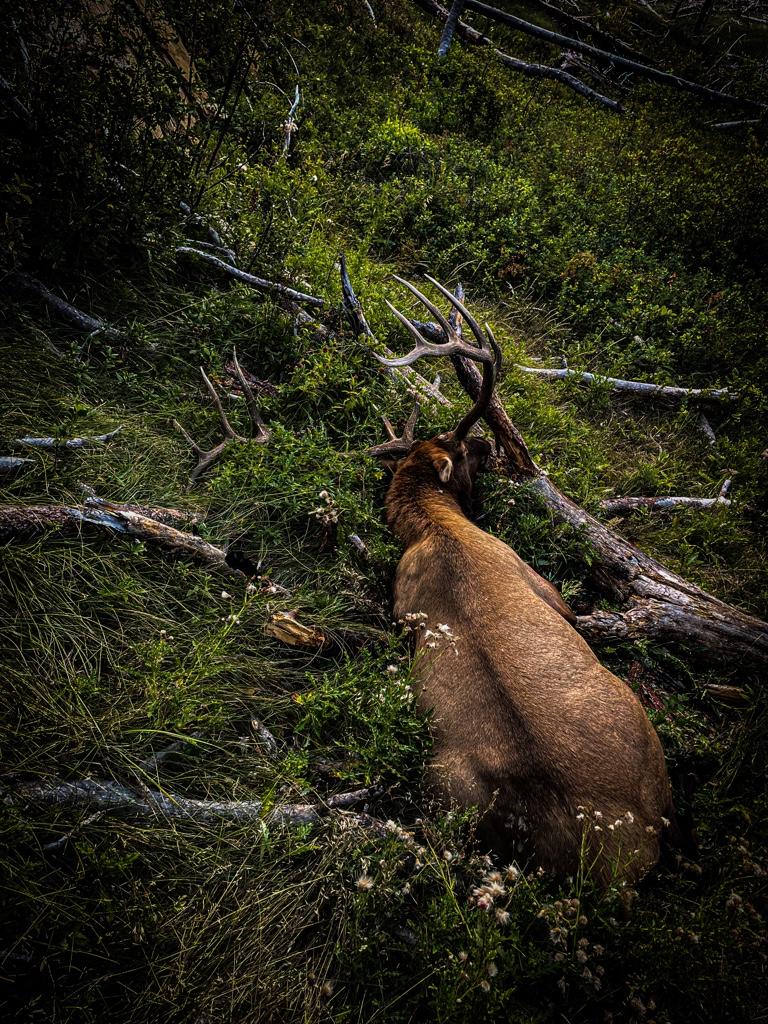 Well he’s spoiled for the rest of his hunting life. Congrats to him!
C 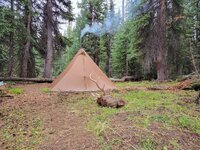 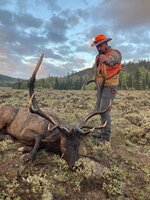 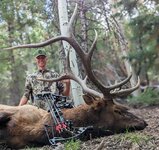 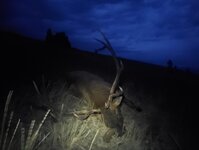 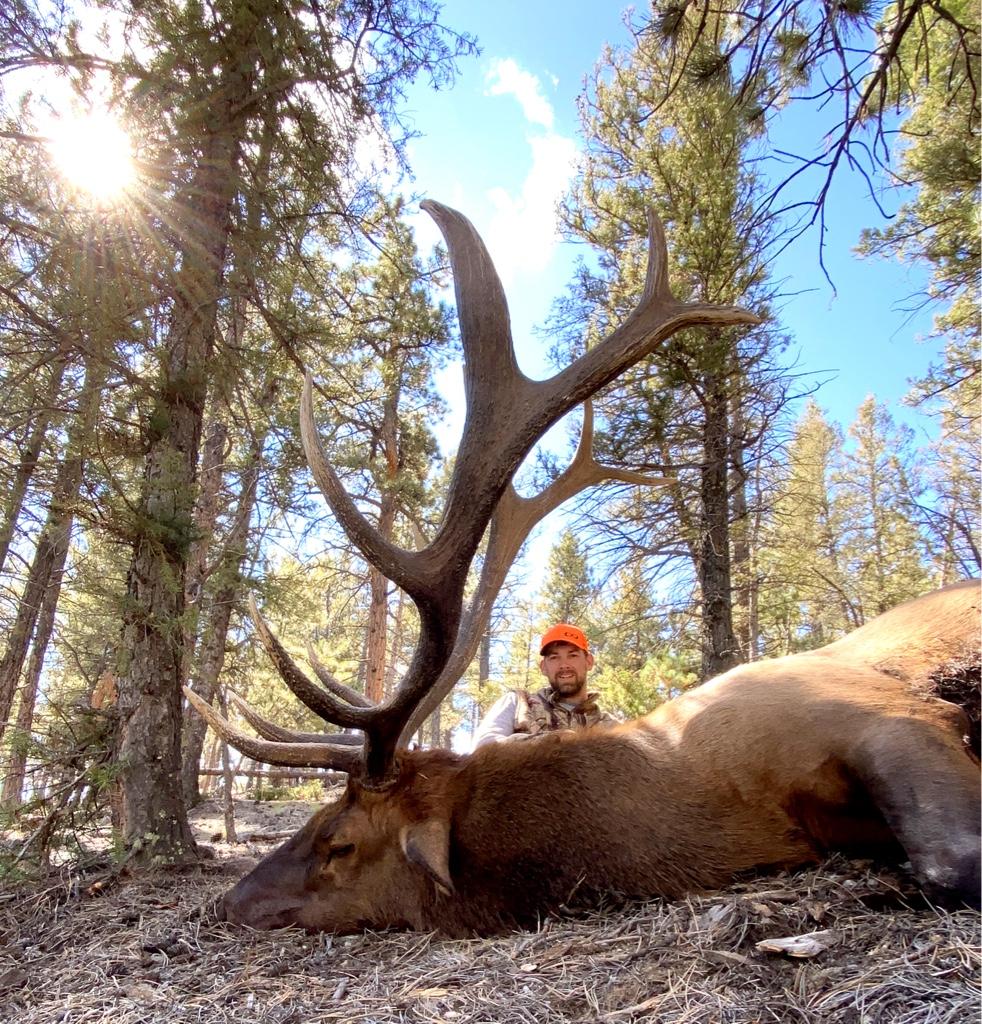 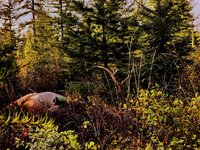 He didnt find quite what he was looking for..but i did!
R

Great pics guys.
This is my first post .
I hope to soon be posting a pic of my first Roosevelt Bull. From BC Canada.
C