With the user name and profile pic, I am not doubting it.

Solid core doors are nice for bedrooms/maybe even insulate some interior walls for sound reduction, hot water somewhere on the exterior for washing dogs/kids, and if you have a fireplace insert I would overbuy for heating the space. I have one in my game room 20x14 w/ 10 foot walls/14 foot peak which will heat the room faster than the one in the bedroom which annoys me.

Pocket doors seem great but suck. Would go solid core there as well as the hollow ones can warp over time.
W

Straight stairs to the basement unless you have a walkout. Turns suck for getting big pieces up and down.
If going with forced air for HVAC, make sure to pay special attention to the amount of return airs used. Half the problems with uneven comfort is lacking return air.
Consider zoning the ductwork by floor or areas...can be done with zone dampers or possibly multiple units depending on the size of the house.

Multiple hose bibs for outside. One in the front and back or sides. Better than dragging hoses all around.

Plenty of outside and garage plugs.

Hate to say it but with the way things are going, perhaps pre-wire for electric vehicle charging in the garage.
S

Other things...
Work station sink (Ruvati makes some cool ones)
Under cabinet microwave drawer.
If any exterior stairs, build them out of expanded metal or metal bars, so snow falls through (if you’re in that climate).
Think about where you want your grill/smoker
and run propane/power to that location.
Insulated garage doors.
12” Cabinet next to stove for spices/oils
Another 12” cabinet for cutting boards.
Laundry chute!

I have always thought a urinal would be a good idea, have never seen one in a house though. Seems like it would be great for young kids or me if I have had one to many!

Bobbyboe said:
To the guys with spray insolation, what size are your exterior walls? 2x4 or 2x6? Also, how much more does spray cost to conventional?
Click to expand...

It's a bit more expensive, but the savings are astronomical in comparison.
We have 2X6 walls, and 9" "I" beams in the vaulted that are filled with foam. Icynene is clean, no offgassing or fibers like the pink stuff, and it's safe if burned. The old school foam was toxic if burned.

I'll see if I have a photo of the spray process. We sprayed between the studs, and scarped over the stud ends with a scarp knife leaving a packed area ready for drywall. Amazing really.

My nieghbor came over during the process and was so impressed that he started his own spray foam company right in our town.

outdoor kitchen with sink and yes hot water
outdoor/indoor fireplace, one fire to look at from both inside and outside the house.
safe room big enough for a table in the middle.

I haven't read all the responses but here are a few that came to mind from our build a few years ago.

The wife really likes the central vac system and we got it with a few options, including a garage hose that I love and baseboard ports in the kitchen and salon (wife cuts hair).

Depending on the size of the house, a hot water circulation pump can be awesome. I get hot water to my shower in less than 2 seconds with it on, it takes about a full minute without the pump on.

If you have kids, suspended seating at the island, way nicer than dealing with bar stools.

Our cabinet company was testing out a new product idea and threw it in for free on our mantle. There are hidden cupboards behind most areas of the mantle. (See photos) They are kind of hard to access without knobs but it's pretty cool for hidden storage of things you won't use very often.

I have dual shower heads in my shower and I'm disappointed in the rain head. I need to try a different head but I don't like it nearly as much as the one my Dad has. Same brand too. I still like the idea, but I never use mine cause it doesn't work well.

LED lights were worth it.

Smart thermostat and doorbell were worth it to the wife.

I had the electrician add a floor plug where I knew our couch was going so the motors on the recliners can run without cords scattered all over the floor.

If I had to do it again I'd insulate the garage and add a floor drain.

My neighbor is building next door and added an RV dump in the corner of his huge garage tall enough for him to store his trailer inside. It's tied into the sewer lines so he never has to go to a dump station. That was a cheap idea I wish I would have thought of.

Alot you can do, just depends on what you want to spend and how the house lays out. 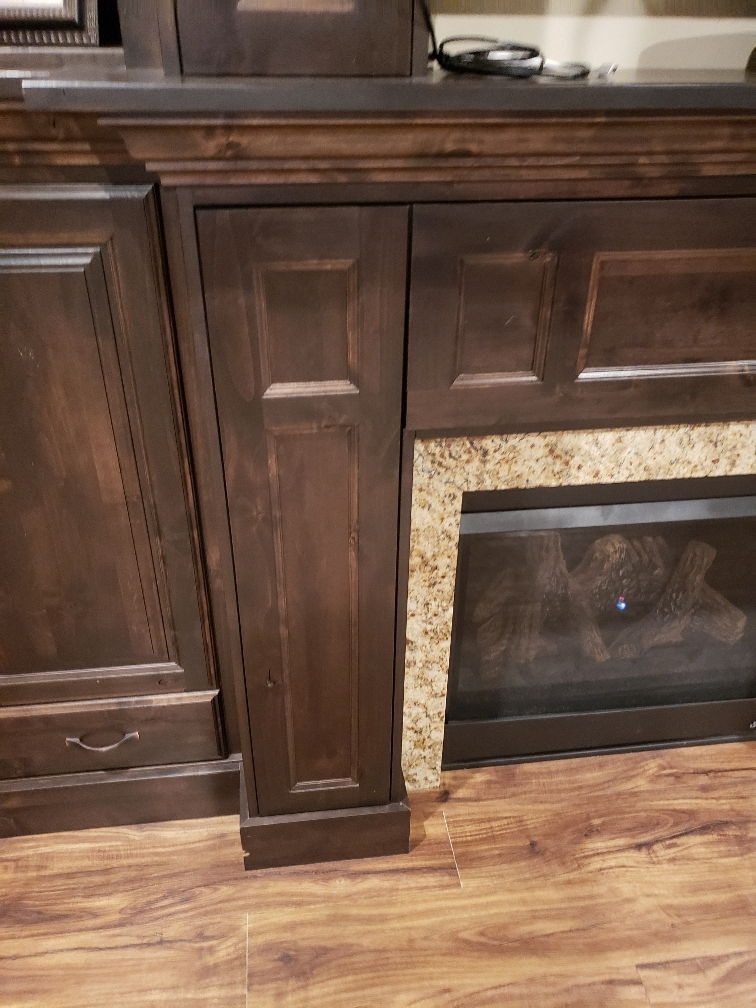 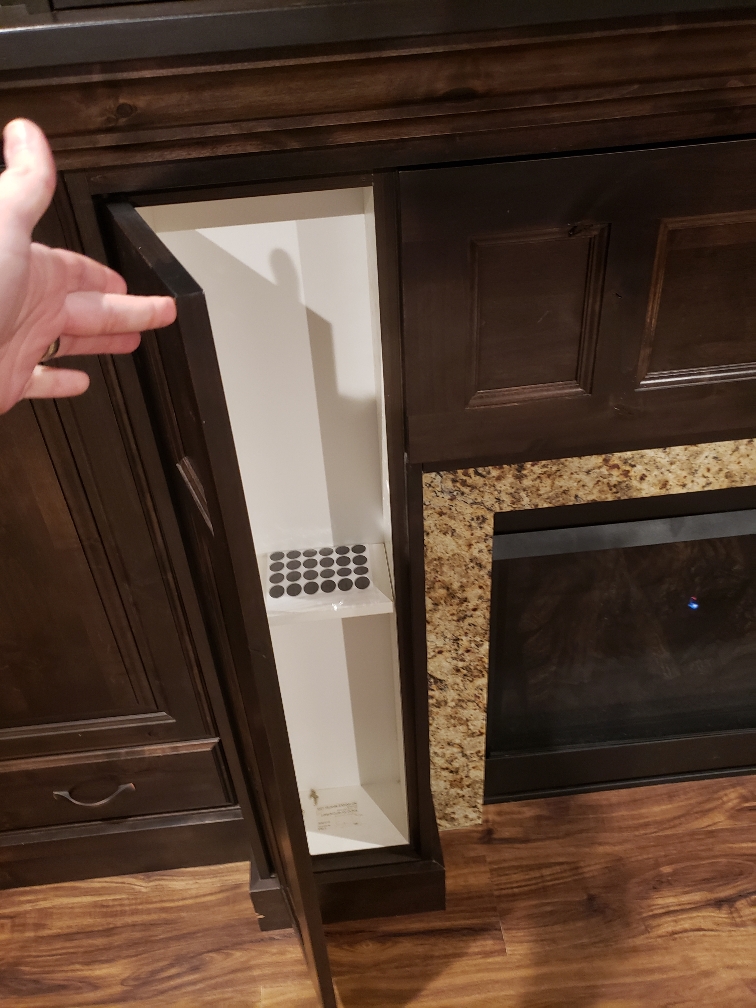 Putting an apartment over the garage is on my dream list. Perfect place for family or friends to stay on a visit so they’re not in your space. You can use it as an office or even rent it out if you want. Or a doghouse for when you buy that next sick rifle without telling Mrs BadJohn.
B

What are you guys choosing for flooring in these new homes. True hardwood, laminate, luxury vinyl, ect. The in-laws just installed luxury vinyl and I have to say, I'm impressed with the look and feel. My last home I had acacia flooring installed. It looked amazing, but seasonal swings caused substantial expansion/contraction. In winter there were some pretty sizable (1/16") gaps between some boards. Does all hardwood have this much activity.

That gun room people are talking about is amazing. For me, a must have in new construction would be stairs from the garage directly to the basement. Straight shot for taking items downstairs, without walking through the house.
T

We tiled a small area in the garage basically the size of the bottom of a shower with a retractable hose to wash dogs, kids, and dirty feet if the wife is crusing barefoot.
R

A large unfinished basement area with nothing else but shelves to store all the seasonal stuff like Christmas decorations, winter clothes camping gear, etc.

I'll repeat a few of the responses and add a few myself.. just about to move into the home we've been building..

-saw a gun room mentioned under the front porch. If you want a concrete porch, its a great idea as its not much move expensive. Just make sure you put a drain in there for a dehumidifier and duct work to keep the space conditioned.

-wood burning fireplace (if you have access to wood), and make sure it has a blower option.

-We also have our hvac zoned into two different zones. otherwise the fireplace heats up the great room too much and doesn't allow the furnace to run so the rest of the house is cold.

- Living room most-used switches control the lamps - because that is what you will be using most of the time. (kinda like corbland was talking about)

-Hidden pantry - just because its badass. We love our walk-in pantry, but put a cabinet in front of it so you'd never know it was a walk-in.

-Spray foam insulation - spend the extra money now because you can't redo it later. More efficient, adds strength to the structure, and quieter.

- Outlets in soffits - and putting them all on a switch is even a better idea.

- Lights in all the showers. it amazes me how many homes I see where the showers are dark because theres no light.

- Look into geothermal. After the rebate and tax credit, ours was the same price as a conventional gas furnace and a/c unit. I'd look for those benefits to get even better under the current administration.

-If you dont have a walk-out basement, make sure your stairs are straight and there is plenty of space at the top and bottom.

-Insulate some of your interior walls - we didnt, but wish I would've.

- Curbless shower. The floor joists can be modified so this is possible.

-I wish I would've added a staircase from the garage to the basement.

-Oversize your garage. We have a 2 car garage and its 30'x30'. Double floor drains so between the vehicles stays dry.

-And I agree with MattB - go with solid core doors (ours are masonite), and pocket doors suck.
J

Undermount sink in the kitchen. So much nicer than a standard sink.

Orient the back of the house to face east. It's better than a western or Southern exposure.

Don't cheap out on sliding patio doors. My home I did a few years ago I spent more on those things but they sure slide better than my current vinyl doors.

Outlets chest high in the master WIC, near a shelf.

Recirculation pump or some other method to get instant hot water to your furthest fixture.

Many have already said this, generator switch at your panel.

Plumb for central vac, it's inexpensive and can be a good selling point even if you don't buy the pump.

A proper mud room and more space in the laundry.

I like my homes to have lots of windows that are properly placed. Picture windows placed high at the header. I like there to be enough light in most rooms to not use the lights.

A room off the garage as a "hobby" room.
OP

Sleghammer said:
Orient the back of the house to face east. It's better than a western or Southern exposure.

Don't cheap out on sliding patio doors. My home I did a few years ago I spent more on those things but they sure slide better than my current vinyl doors.

Outlets chest high in the master WIC, near a shelf.

Recirculation pump or some other method to get instant hot water to your furthest fixture.

Many have already said this, generator switch at your panel.

Plumb for central vac, it's inexpensive and can be a good selling point even if you don't buy the pump.

A proper mud room and more space in the laundry.

I like my homes to have lots of windows that are properly placed. Picture windows placed high at the header. I like there to be enough light in most rooms to not use the lights.

A room off the garage as a "hobby" room.
Click to expand...