In hindsight I should have snapped the picture with the beautiful bay behind me, but was way more worried about a brown bear popping out of the grass. Testicle free Blacktail taken late October.

First archery kill for my oldest boy. While we were skinning/quartering, our good friend was nice enough to start a fire and cook us some back straps. It was good fuel for a late night pack out and a great experience. 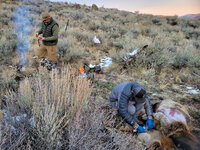 Beauties and The Beast: This is my ten-year-old daughter's Shiras moose taken in Idaho in September 2021. She is on the right holding the rifle and her little sister, who is seven, is on the left. We hunted together for five days until we spotted this bull at a little under a mile from the truck. We moved in as quickly as we could to where we had last seen him and relocated him. She made a good first shot and a couple follow-ups before he went down. My seven-year-old took a really shaky video of the kill that will give viewers motion sickness, but does capture the shot and celebration when he fell.

I focused on the moose for this picture and thought the photo turned out pretty neat. 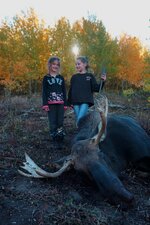 Here is my boy Quade with his first trapped coyote he took in his own trap and his second trapped bobcat. He is picking his own locations and setting his own traps and is doing pretty good at it. 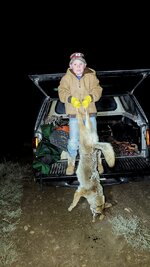 nodakian said:
With today being the last day of eligibility for the photo contest, here's another reminder to post your 2021 kid hunting pictures for the contest before the January 15 deadline.

OK thread is locked. Stay tuned for the finalist list that you can vote on.

Update, got the Whitetail voting thread up, so this one is next. Hopefully this friday.

In the meantime, check out this gem from the Whitetail contest. It didn't make the finalist list but what a great photo!

What a gem @SURVEYOR Update, between the WKR thread and working at a health club in January, I didn't make my deadline to get the vote up today. Hold tight!

The Rokstaff and Western Edge Gear pro staff have finally narrowed the field to 10 photos from the entry thread. Now it's your turn to vote on the best photo of youth hunters in 2021. (Tapatalk user's cannot see the poll, so use the full site if you want to vote.) This year's prize will be a...

www.rokslide.com
You must log in or register to reply here.