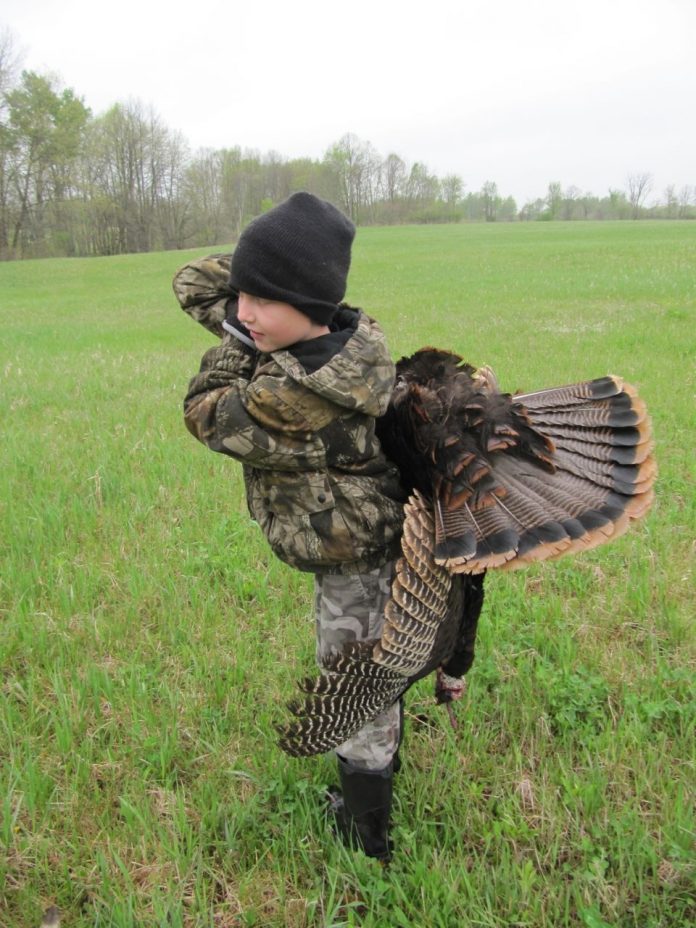 My second hunt of this year was the May 2nd-8th turkey season in Wisconsin. With a heavy personal training workload, a regular job, and crappy weather, my time was bound to be limited.  I literally only had an hour and a half on each weekday morning, and  a couple of half days on the weekend. With our bird numbers really being hit hard the last few winters, I knew my work was cut out for me!

Thursday morning I headed to an area that was a small chunk of private land, close to home. I heard one Tom, several properties away, but there was just no way to close the distance with all the private ownership.

Saturday morning found me waking my nine year old son, Hunter, from his bed at 3:30 am. By 3:45 am we were headed north on the 45 minute drive to a large tract of public land. In years past this had been a great area. The last couple of years however, had been really tough on turkeys in this area, and we weren’t sure what it would be like. Not having any MRI (most recent information) I decided to head in about 5/8 of a mile from the road to a transition area, about 400 yards from a roosting area. Our timing was right and just as daylight was breaking, we were getting settled into our T5 Double Bull blind. Within a couple of minutes we heard a Tom gobble in the typical roosting area.  With no other birds gobbling, had I been solo, I would have immediately closed the distance with just the bow and the HUD decoy. With Hunter along, I knew we would need the blind. Three gobbles and 10 minutes later I made the decision to cut the distance. We quickly broke down our set-up and quietly tried to get closer. After cutting the distance about 125 yards he gobbled again. At this point, not knowing whether he was on the ground or in the tree, I knew we had to get set up quickly. Unfortunately, even though the whole move took less than seven minutes, we never heard another gobble. Had we spooked him, or had he just hit the ground and shut-up? 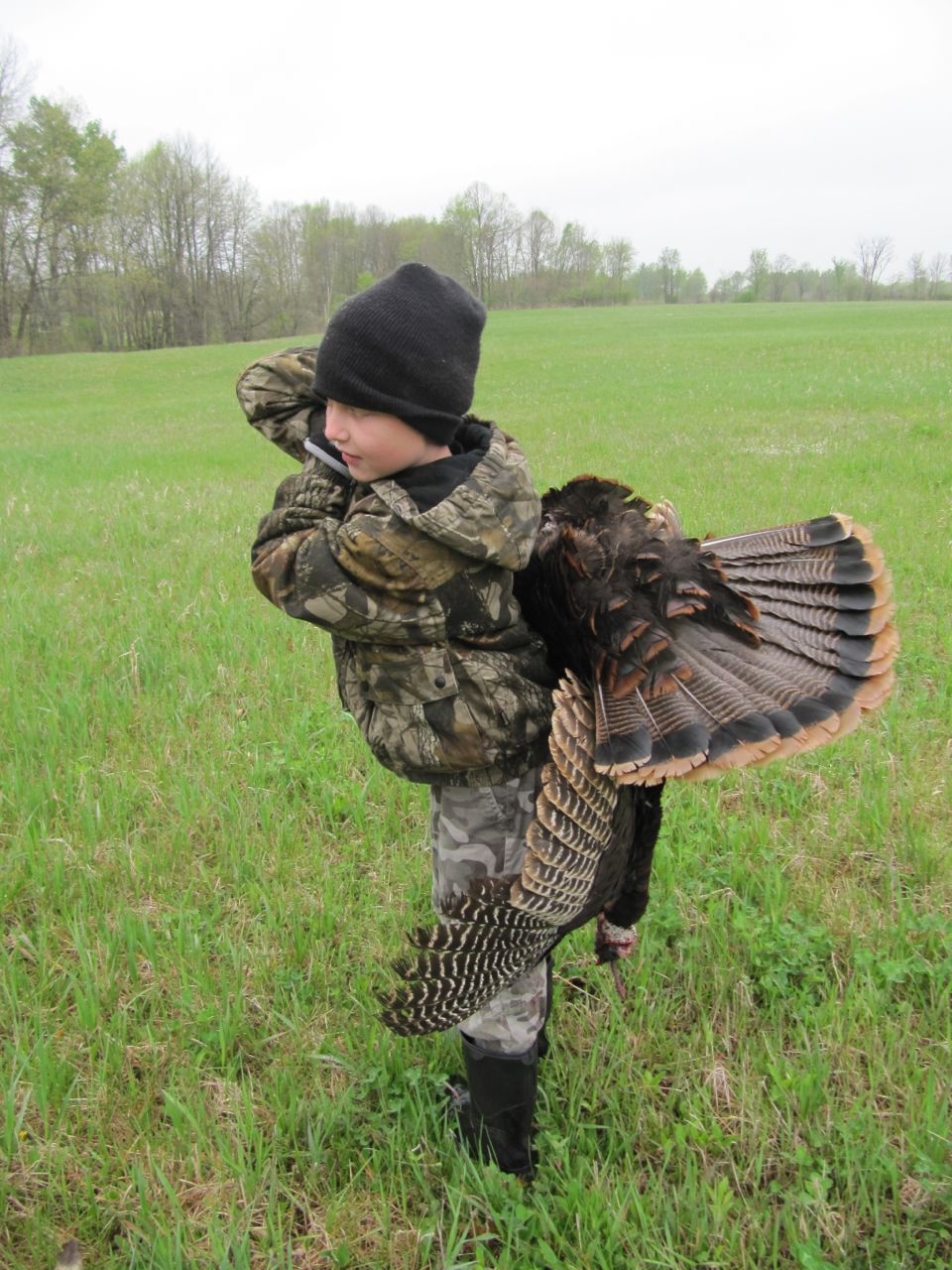 About 5:45 am we spotted a hen about 50 yards out feeding. She spent the next hour within 50 yards just preening, and feeding. No suitors joined her and she eventually just worked off. By 6:30 am Hunter was getting tired, and ready to go. After a short time he nodded off. Although we weren’t having much action I remained confident because I knew there was at least one Tom in the area, and we were set up in a great transition area. With my little man sleeping I knew I had bought a little more time!

About 7:25 am I thought I heard two gobbles. If they were gobbles, this bird was a long ways off, at least a 1/2 mile to the southeast. I was still unsure whether these were actual gobbles or just “hopeful hearing?”  A few minutes later I spotted the second hen of the morning coming from the northeast, she also just took her time and was feeding, although she kept moving at a steady rate.

Shortly thereafter, a crow-flying overhead a few hundred yards to the northeast elicited a shock gobble from a Tom. Pulling out my Hustlin’ Hen box call, I gave a few LOUD yelps. As still as the morning was, it allowed the sound to travel and I got a response gobble from him. It was time to wake up Hunter and get this show going! 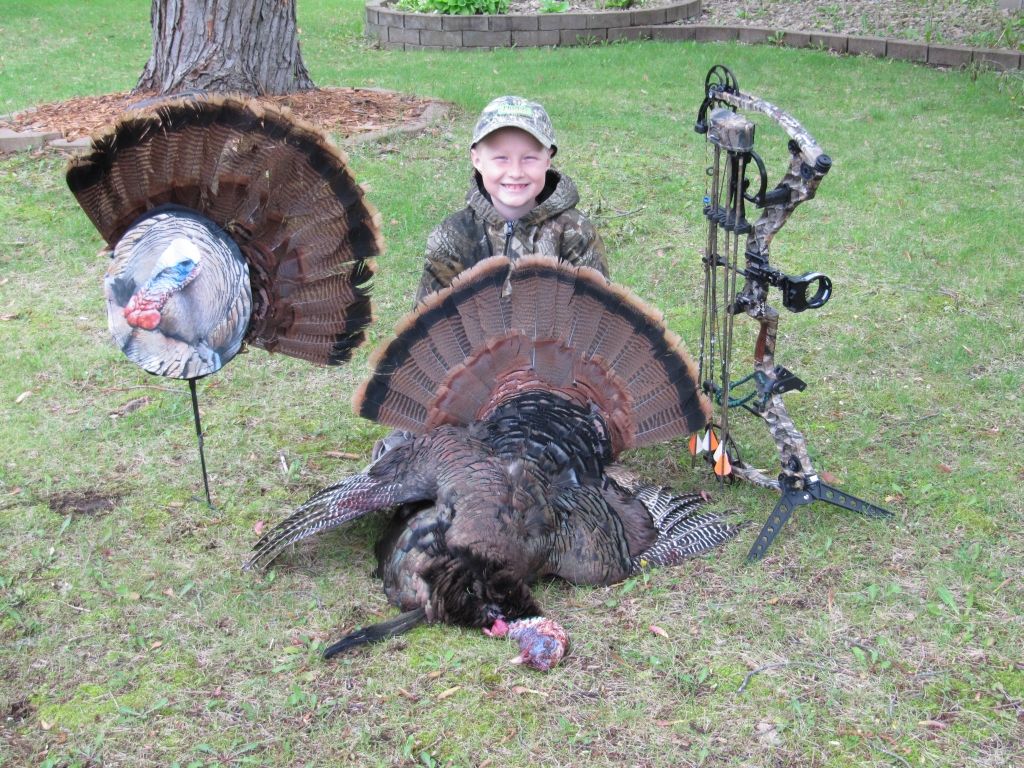 After waking up Hunter I proceeded to close all the unneeded windows and arrange the blind space to prepare for the encounter. Knowing how the birds worked in this area was really key to our success over the last seven or eight years, and hopefully it would play into our hand again. With things in order it was time to start working him. Every time I yelped, cut, or purr we got a response closer than the prior. Within minutes of the original gobble he popped over the ridge into view at about 90 yards already strutting. He continued coming slightly southwest, strutting in to around 65 yards.  This is where he hung up. For bowhunting turkeys I always set my decoys within 2-3 yards of the blind. This helps bring them in as close as possible. This is great for the bow hunter, as well as a gun hunter.

For the next 25 minutes he strutted back and forth, unknowingly keeping the blind between himself and the decoys. Every time I yelped, purred, cut, or scratched the leaves he would gobble or double gobble. It was an amazing show to watch.  Unfortunately, this area is a rather open area with all mature trees. It was great for strutting and vision, but he just wasn’t coming any closer without being able to see the counter parts that should be in sight. There was a big blow down popple tree that was obstructing his view some and also holding him up. At this point I knew there were only two options. I could either go silent and hope his curiosity got the best of him or crank it way up and hope he would get fired up and commit. I like to be in control of what the animal is going to do so I decided to go the “hot” route. I knew if this didn’t work he would most likely slow down some and head out to the northwest. This would still allow us to cut out and circle around and get ahead of him, hopefully allowing us to work him again. I started with the box call, then worked in the Imperial Primos plate (yep elk call).  I was calling hard, loud, and a lot.

He was going nuts and I could see he was starting to move, still fanning, to the west. It was easy to see when he finally cleared the blind and spotted the hen decoy. He stayed in strut but was doing small circles and moving forward finally. Not even quite clear of the big dead fall it was plain to see when he spotted the HUD. He came out of full strut and instantly went into a beard shaking side to side run. Hunter said in a not so quiet tone “Get ready dad, he’s running”. I immediately drew the bow and by the time I was getting locked in he was wide open at 10 yards. I had to squeak out a yelp on the reed and by then he was at three yards….a blind man could have made the shot!  What an amazing hunt. 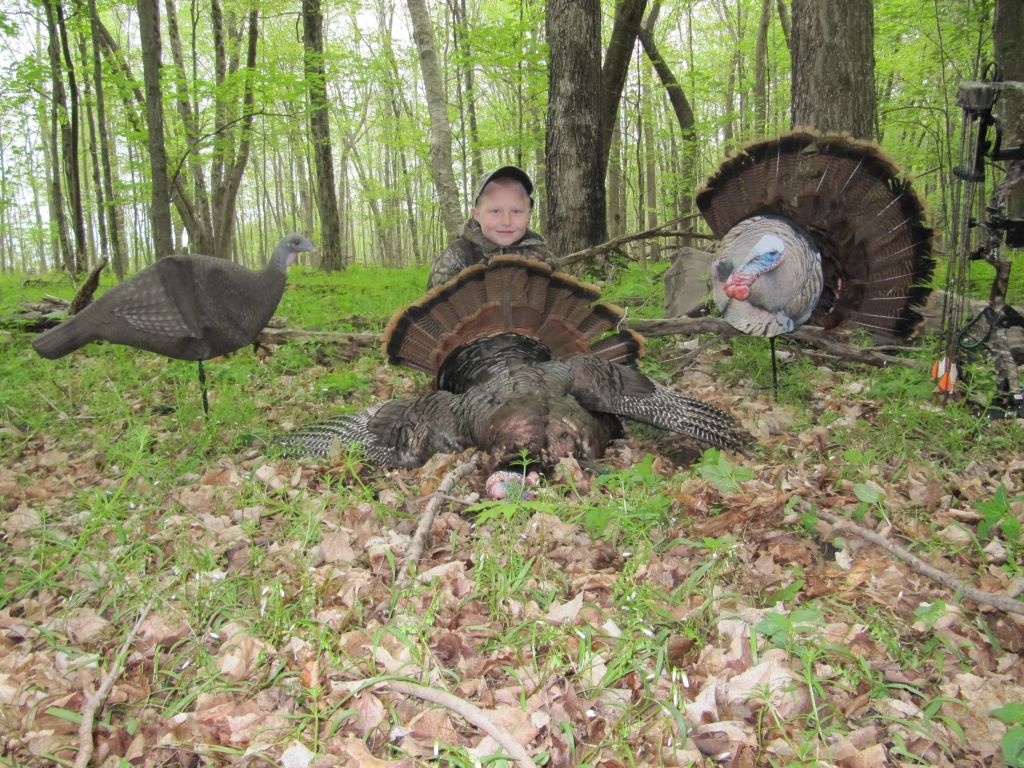 The Maasai and Hadza Hunter-Gatherers

Fantastic Beasts and Where We Hunt Them