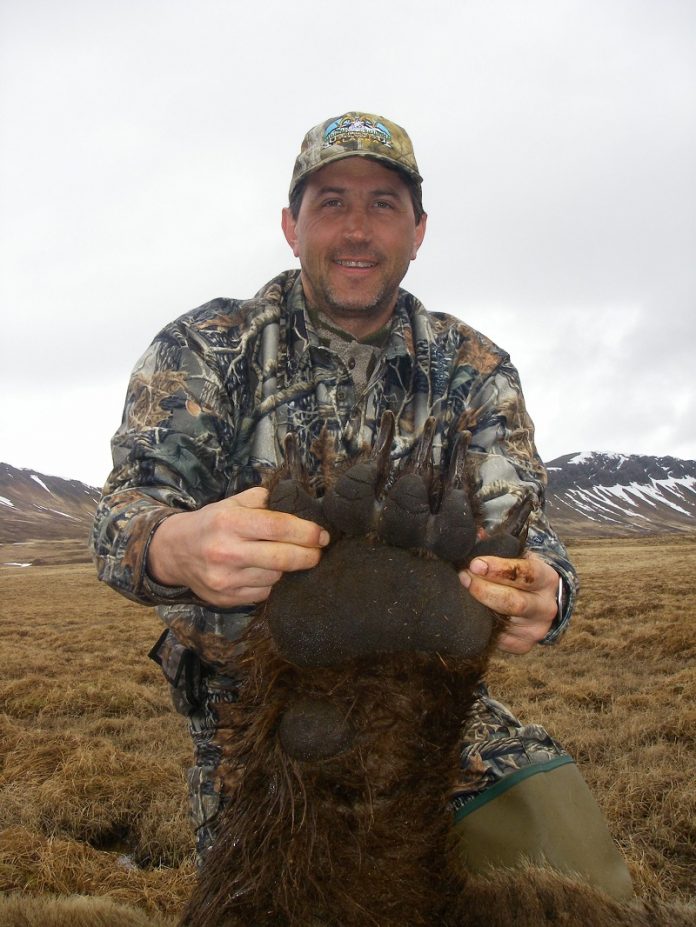 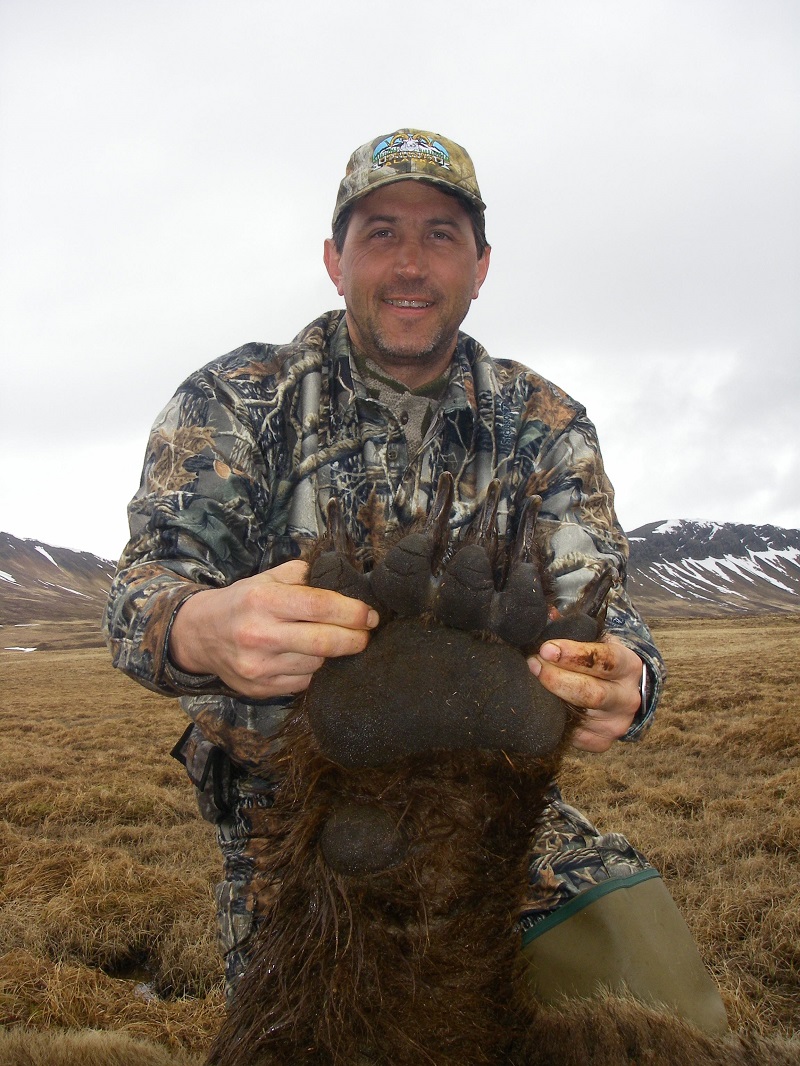 The grizzly’s claws flung forward over his shoulders in windmill fashion as he charged toward me. Upon spying him eating soapberries, my decision to pull out my video camera rather than my .44 Mag was grossly imprudent. At less than 40 yards, his ears were pinned back and bloodlust filled his eyes. By the time I returned my camcorder to its sheath and went for my firearm, the bear was close. I knew he’d be on top of me before I was able to shoot.

The Arctic grizzly skidded to a halt. At 12 yards, he stood on his hind feet, woofed, and popped his teeth. I drew my Smith and Wesson and promptly lobbied for him to leave.

I’m not a survival or a firearms expert. I have no formal training or attended any seminars, and I dare say I’ve never even finished reading a single article on how to survive a bear encounter, but I have had my fair share of brushes with bears. Lord willing, I’ll soon be sleeping with them for my 20th consecutive season in Alaska. I’ve guided across the Last Frontier for Dall sheep, brown bear, grizzly, moose, and caribou. I’ve lived more than eight years of my life in the wilderness in a tent. Here’s a few lessons the big bears have taught me over the years. 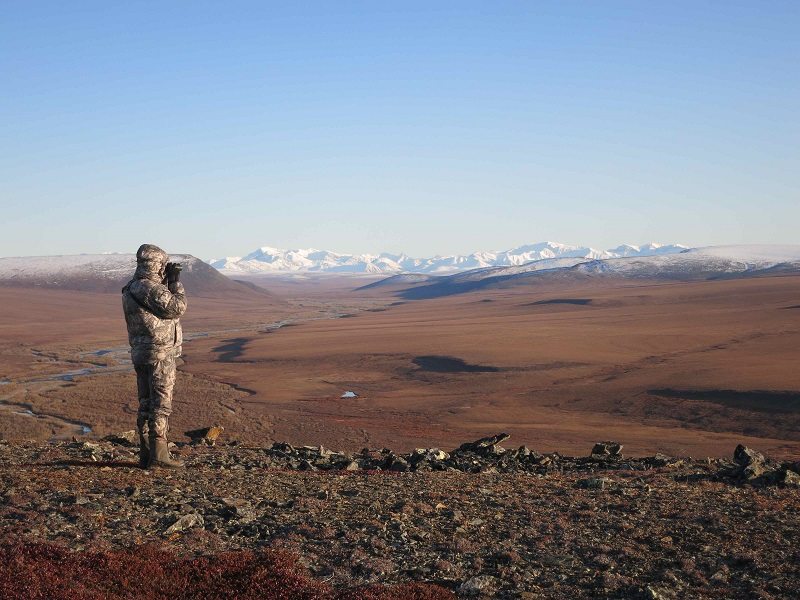 Billy’s grizzly client glasses out over the Brooks Range

1) Know when to speak up

Sounds simple, but like many situations in life, sometimes it’s best to keep one’s yapper shut. In the aforementioned incident it was time to shout or prepare for a very unpleasant bear hug. Thankfully the young boar stopped and my client and I were able to run him off with some stern warnings without getting even so much as a wet pair of undershorts.

When I first started in Alaska, I was packing for a guide that was deathly afraid of bears. Every bear he’d see within 400 yards, no matter if the bear even knew we were there or not, he would start hollering or shoot his rifle to run the bear off. There’s an old saying: What you fear you create. I had more crazy bear situations in the few times I hunted with that guide simply because he’d stir up every bear that came near him.

I once watched a sow with a grown cub walk along a creek bottom 400 yards below us. All the sudden my hunter hollered to scare her off. The bear immediately looked up and headed right toward us. We sent several rounds over mama’s head before she finally stopped at 20 steps. I sent one more round in front of her. Gravel shot into her face. Only then did they casually turn and leave. Never shout or shoot at a bear unless they know you’re there or contact is unavoidable. It’s almost always best to leave them in their natural state. If you don’t mess with them, most often they won’t mess with you.

If I feel an encounter is unavoidable, I want our get-together to be on my terms, not the bear’s. I’ve done this dozens of times and the variables are many, but for example let’s say a bear is following your back trail into camp or is circling your camp (which happens often), and it’s getting dark. I’m not going take the chance of him lurking around my tent all night and then paying me a visit when I’m enjoying my beauty sleep. Rather, I will try to circle up wind of him, preferably in open country. Ninety percent of the time he will head for hills, but sometimes a confrontation is necessary. If a bear finds one morsel of food around your camp, they’re as easy to get rid of as a hound dog that can’t smell.

An ounce of prevention is worth a pound of cure, so keep your camp clean. But sometimes bear are curious. If they come into your camp, don’t bother yelling at them. Pull out the rifle, make sure they see you, and fire over the bear’s head. Don’t worry about spooking game. If you try the nice-guy approach and “shoo” the bear off, often times they will come right back. Each time you will have to get more aggressive to get rid of them. Soon they will lose any respect or fear of you and that’s when they become dangerous. 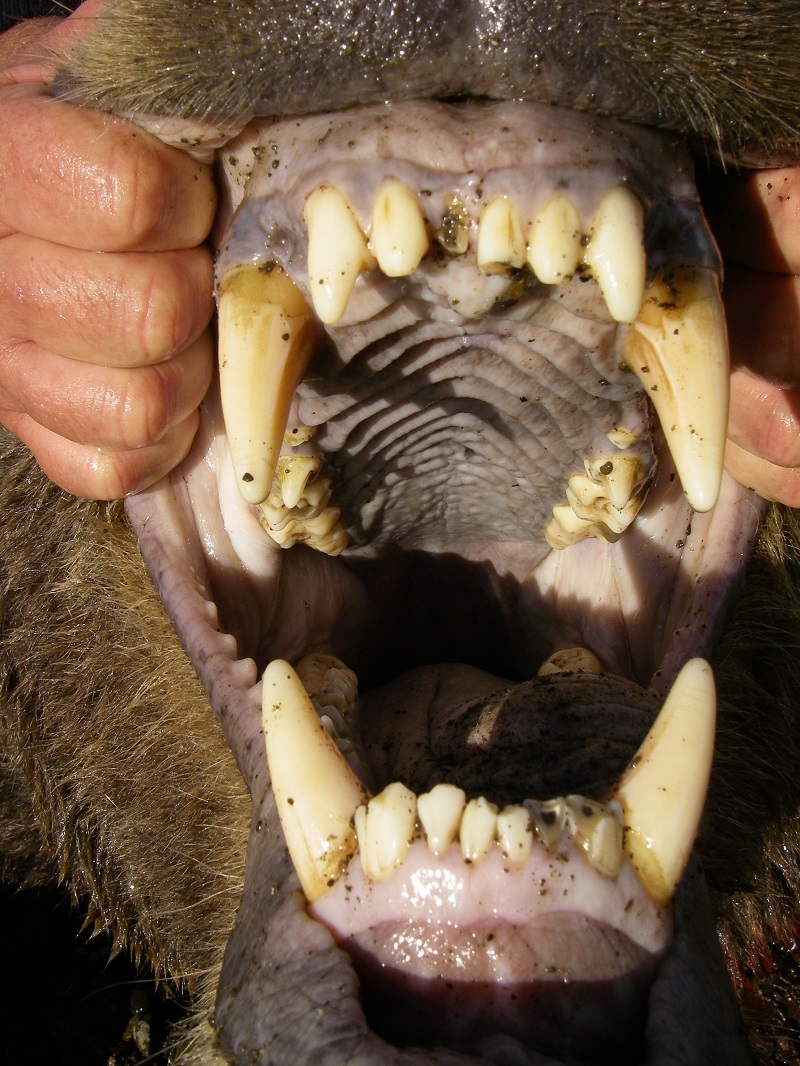 If you’re squaring off with a bear and he stands up, to the novice that might seem pretty intimidating, but in reality that tells me I have the upper hand. All animal behavior is for a reason. They rarely do things on a whim like us humans. The bear I mentioned in the opening stood up after I yelled, because he was no longer sure of what I was. A bear expects his prey to run whereby by he will hamstring you, ride your back like Dan Gable, and wear you out as he eats you alive. Stand your ground. Don’t run! 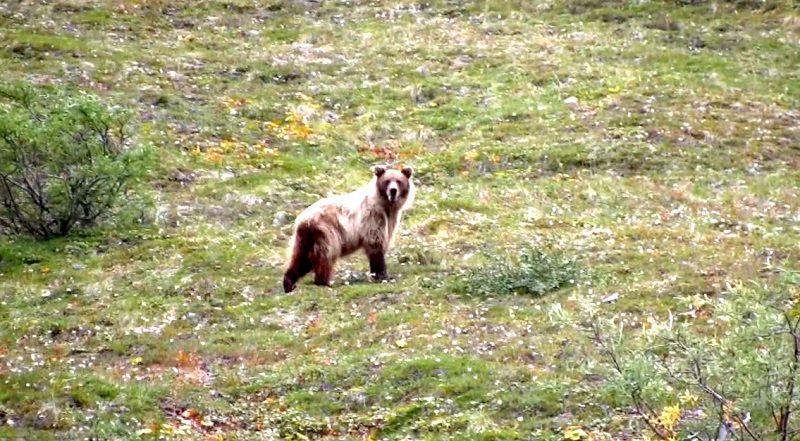 The bear that stopped charging Billy at 12 steps

The same goes for huffing and teeth popping. It’s an intimidation tactic. However, when a bear pins his ears back and gets low like a cat, that’s a good indicator he means business. I’ve yet to have to kill a bear in defense of life and property, but in a few of the dicey mix-ups I’ve been in where I thought I might have to shoot, I’ve always tried to kneel to get on the same plane as the bear. It’s easier to hit the head or chest when they’re coming straight for your barrel. If I shouted, fired rounds over his head, and he’s still coming at 20 yards, I’m shooting every time.

The only time I don’t carry my .375 H&H is when I’m sheep hunting. When chasing curly horns I carry a titanium S+W .44 with 305 gr. LBT bullets by Buffalo Bore. I feel hard cast bullets ensure penetration. A major downside of a pistol is that the sound is often ineffective in scaring a bear away. In fact, at least a third of the times I’ve tried it, it actually makes a bear more aggressive. A blast from a magnum rifle, however, will scare bears away 80 percent of the time.

I use 300-grain Barnes TSX (not the X bullet.) in my .375 and have seen excellent results in the bears I’ve had to shoot. Swift-A frame and Nosler partitions have also been good performers. Unless weight is a major issue, I always prefer carrying a rifle over a pistol

5) Be big and be creative

My sheep hunter and I were dog tired. After 8 days of hard hunting, we finally stumbled into camp late at night with a ram. I woke the next morning, stepped out groggy-eyed onto the snowy ground for a nature call and was suddenly startled wide-awake when a grizzly exploded out of the bushes where we’d hung the meat the night before. The rascal bounded off with a bag of hard-earned sheep meat flopping in his mouth. My client and I chased after him in our skivvies. He eventually dropped the bag, but not after eating the tenderloins and half a hindquarter.

With winter setting in, the grizzly was soon back. We stood together to look like one big object and firmly shouted at him. This typically does the trick, and it worked for a while. Knowing we had lots of tasty mutton, he weaseled closer. Soon I was forced to fire rounds out of my pistol and the hunter’s .300. The first few rounds held his attention, but eventually rifle fire didn’t faze him. It wasn’t until I took my full-length sleeping pad and started waving it in the air that he quit advancing on us. Fortunately the weather was clear, so I called the pilots and advised them that a grizzly was standing 40 yards from us and the only thing keeping him at bay was a Thermarest Neo Air.

An hour later the bear scurried into the bushes as the Super Cubs landed. As we hustled to pack our gear, the grizzly came back. We stuffed everything in the planes and jumped in. The bear just stood there watching as we took off. 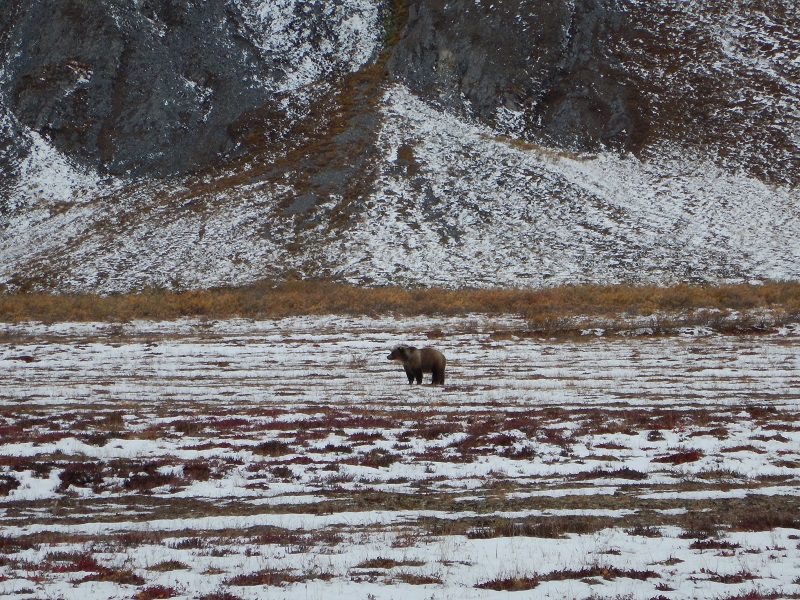 The sheep-thieving grizzly that wouldn’t back down to gunfire, but wasn’t brave enough to take on a bedroll

To come out of bear encounter alive every time, speak up when necessary, set the terms of engagement, stand your ground, use enough gun, and be big & creative. 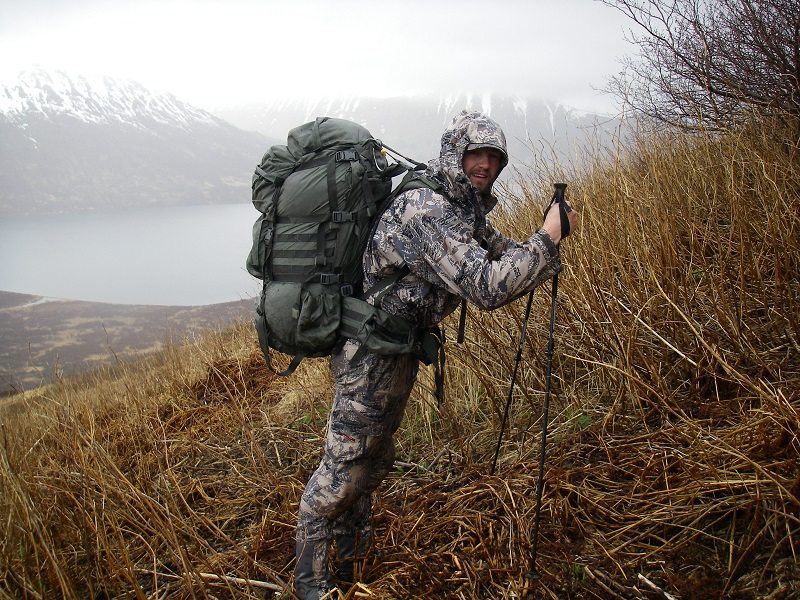 Billy Molls has guided for brown and grizzly bears from SE Alaska to SW, from Kodiak to the Arctic. He is also an author, freelance writer, public speaker, hunting consultant, and producer of The Modern Day Mountain Man DVD series. For more information go to www.billymollsadventures.com.

You can ask Billy questions or discuss this article here