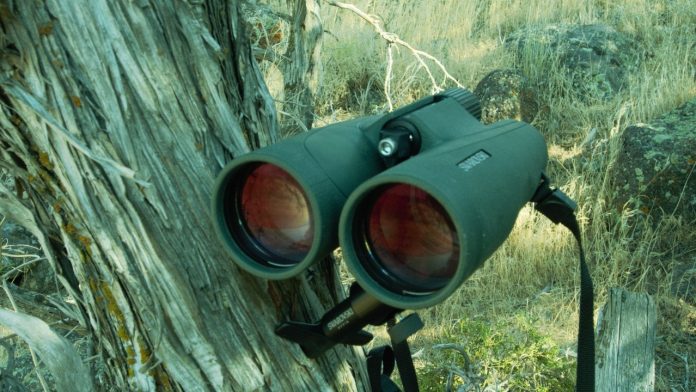 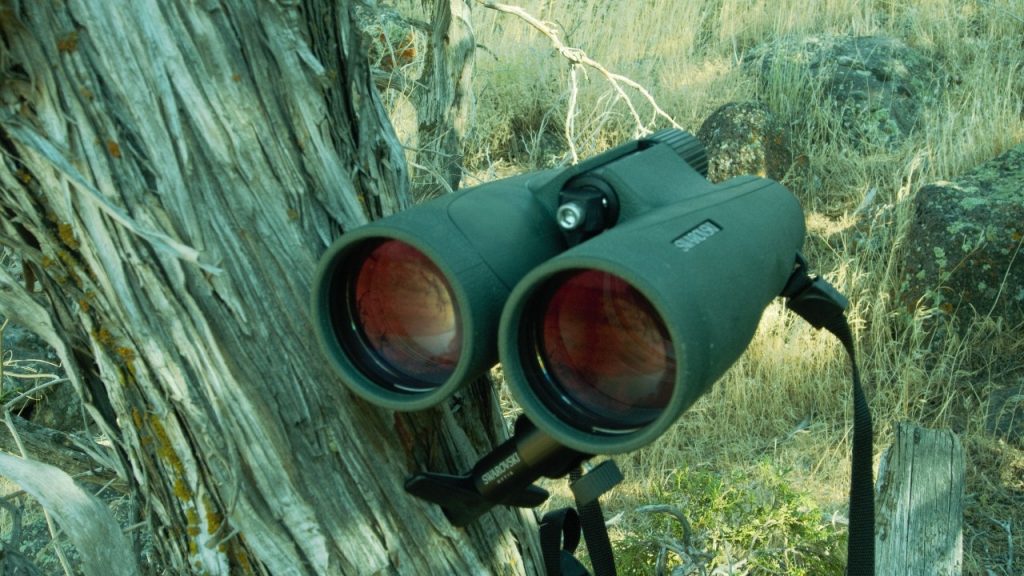 I’d been glassing since first light with my SLC 15×56 binoculars backed up by my 25-50x80mm ATS spotter, both Swarovskis. This is a lot of glass to pack, but when I don’t have to hike far, it’s really the best combination for finding big mule deer.

It was getting late, around 9:30 AM, when I spotted a big white rump in the heavy quakies at nearly three miles away.  When three is no snow, it’s often the mule deers’ white butt that you’ll notice first.  I could tell it was a big-bodied deer compared to all the others I’d seen that week.

I marked the spot and switched over to the 25-50x ATS and cranked it to about 40X.  I stared hard knowing the buck only had to move a few steps and would be out of sight.  Big bucks are a very calculated animal and rarely move quickly and carelessly.  This one seemed to be contemplating his next move.  I hardly dare blink…

Suddenly, he lifted his head and stepped clear of the quakies.  When the sun is bright and at your back, it tends to wash out a buck’s antlers making them hard to see, unless they’re big.  I had no problem seeing this buck’s antlers as he walked straight away from me, even with the gray sagebrush as a backdrop.  He was heading for a ridge where he’d cross the skyline–perfect for evaluating antlers at long distance–so I trained the scope on the place I thought he’d cross.  I’d likely only have seconds to judge him.

As he stepped into the scope, he turned quartering away then stopped.  Instantly I could tell he was heavy and had a beautiful basket-shaped rack.  He didn’t look very wide.  In over 25 hours of glassing the last four days, he was by far the best I’d seen.  I also remembered the fact that when you see a buck from that far, he’s usually bigger than you think.  He stepped off the skyline and was quickly out of view.  I knew right then and there, he was the buck I’d be chasing the next four days. 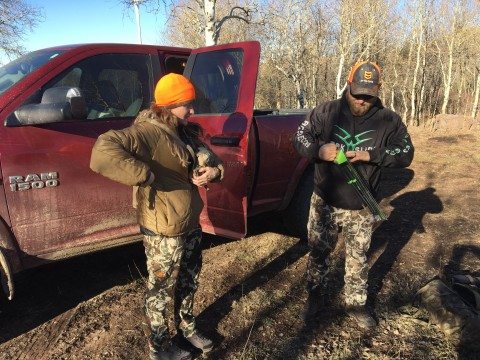 I gathered up my horse and trotted down the two track to camp.  Once in the truck, I rushed to town to meet Tanya and Ryan.  Without much ado, we headed right back to where I’d seen the buck just a few hours earlier. We drove within a mile of where I’d seen him then hiked the rest of the way.  With the dry warm weather and the fact that the area was choked with almost impenetrable brush, still-hunting was out of the question, so we elected to ambush hunt.

The buck had crossed a large saddle–about a half-mile wide–so Tanya and Ryan staked out the lower half while I hiked farther up the mountain to cover the top half. I settled in under the shadows of some big rocks and watched the country around me. We sat till after dark and while we saw other deer, we never saw him.

The next morning, Ryan and Tanya headed out to another part of ranch where I’d seen some nice bucks, but I went back to the saddle.  The weather was extremely warm for early November and the deer activity was at a lull.  I sat on ambush for four long hours. I quit for lunch then headed back out in the afternoon, glassing the saddle from a different angle.  Legal shooting light fled the sky without me ever spotting the buck.

The next morning was Sunday.  I hiked in from a different road just so I could have the rising sun at my back but still be within less than a mile of the area. This would allow me ideal spotting conditions but put me close enough to possibly pull a stalk off if I spotted the buck.

Just as the first rays of the sun hit, I spotted a big-bodied deer walking about 900 yards out.  I dropped to a knee and pulled out my little Leupold 20×50 spotter.  Through the scope, I could see it was him.  I got a much better look and could tell he had extra points and was even heavier that I’d originally thought.  I only watched him for about 10 seconds, then I took off hoping to catch him before he hit the deep cover.

I was instantly swallowed up by a giant quakie jungle and by the time I came out the other side 20 minutes later, I couldn’t see the buck anywhere.  I quietly sneaked up a knob and sat down in the shade so I’d be hidden.  Rifle ready, I silently watched everything around me.  By noon, all that was moving were a few birds so I made the long hike back to the truck.

Time was flying and I nervously remembered that I now only had two-and-a-half days to kill this buck.  Determined, I was back out for the evening hunt but again saw no sign of him.

At times like this, I have to keep reminding myself I really did see a great buck and that abandoning the hunt in hopes of finding another one is futile and foolish…