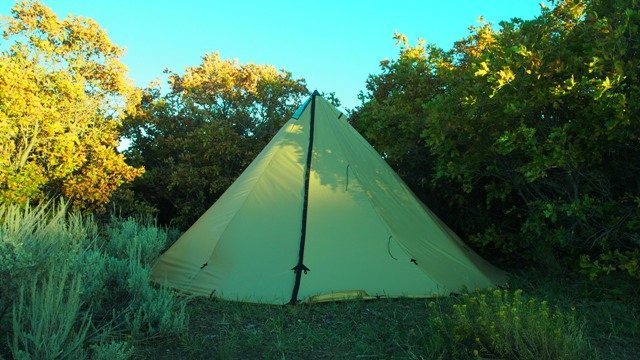 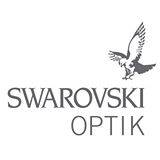 0615 was first lite.  Been glassing since then.   Seen three bucks. One heavy body but got in brush

1015 Got back to truck.  Not a bad morning for bucks.  I never for sure saw that heavy-bodied buck again.  I got around the hill where he went and spotted a 4-pt in the junipers.  Not sure if that was him or not.  This happens so much in big deer hunting.  You see them and by the time you get the glass settled, they are in the cover or a fold of the terrian.  I chalk this phenomenon up to where they choose to live: broken, brushy, varied terrain.

Most of the bucks were in the 3×4 range, but good to see that much activity.  This area has a quite a bit of cover (it’s not just open sage) so seeing that many bucks can be tough even if you’re on top of them.  I never heard any shooting but did see a few hunters out and about- not too bad though.  That is what I like about the muzz season, unless you’re hunting where there are a lot of elk, the deer pressure isn’t too bad many places, especially if you hike.

Strategy for this hunt is the same for all hunts where I don’t have a pre-scouted buck: Cover lots of country looking over as many bucks as possible for a shooter. If I find one, then I’ll hunt that buck.  If I don’t, then I’ll enjoy this beautiful September weather.

Last night I just got camp set up (love the new 8-man Ultralight Tipi Seek Outside!) and shot the muzzleloader. I’ve learned this gun needs about 3 shots before she gets accurate.  Shot a 2″ group at 55 yards off a poor-excuse-for-a bench, so looking pretty good.

Here is the tent and camp: 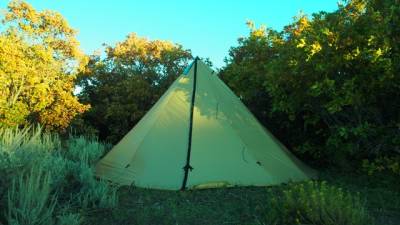 Yesterday was the first time I’ve ever set it up.  It really was pretty easy- probably took me 20 minutes.  With a few set ups, I’d bet I could do it in less than half that.  Plenty of room for 2-4 guys for an extended hunt in bad weather.  I believe in elbow room or you start to go stir crazy.  This hunt could go 10 days.  Today, I’m going to set a few guy lines and increase the space even more and assemble the Titanium stove. Plan is to work out all the kinks so when I start my Oct/Nov backcountry hunts, this set-up is firing on all cylinders.

I’m scouting some country tonight where the bucks move after sun set, so probably just hang around camp until late afternoon.  These long-day hunts can be boring until you find that buck!

9:00 PM update.  Headed out about 5:30. Decided to set an ambush on a canyon where I’ve seen good bucks in past years AND sit where I could glass that country way across the canyon where I glimpsed the heavy-bodied deer this morning. 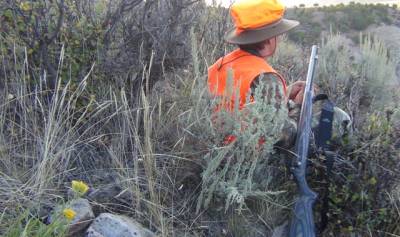 It worked!  At least half way.  I didn’t see any deer for the ambush spot but across the big canyon, just at sunset, two bucks appeared in the open sage. One was the 4-point I mentioned this morning and the other was a big-bodied buck.  I got the big Swaro 80 ATS on him in a few seconds.  He was a big deer alright, but his antlers weren’t great.  Probably mid-20’s wide and tall- G2’s around 18″- but he was a 3×3.  Now don’t get me wrong, I’ll shoot a good 3×3, but this early in the hunt, I’ll pass for now.  He was an older buck.  Just like you can tell a 190 pound guy from a 250 pounder, this buck was way bigger than his counterpart.  I’ll watch for him tomorrow as I’ve learned where there is one older buck, there could be two.  All in all, saw 14 bucks today.  Not too shabby.