Choosing a cooking system for the backcountry; boils down to 3 things for me.

1) Reliability, it needs to be tough. It needs to light and run even though it gets banged around for weeks on end every fall, and endures rain, wind, snow, and 13,000 feet.

2) Weight- This is easy. When packing for a backpack hunt I am counting fractions of an ounce. The lighter the better as long as it remains reliable.

3) Efficiency, of the 3 although important, this is what I worry about last. Once I have decided it is reliable and light enough I look at the fuel burn rate, and boil times.

We are going to take a look at the Jetboil PCS, Modified Jetboil with Soto stove adapted, and the Esbit stove.

The Jetboil Personal Cooking System is an “all in one” set-up. The stove uses a simple twist-lock attachment for connecting to the cup. When not in use the fuel canister, stove, pot stabilizer and flux ring all nest inside the stove, for a compact space saving package. This whole unit weighs in at 436 grams without fuel, or 15.38oz. With the 100 grams of fuel (6.8 oz total weight) the unit and fuel total weight is at 22.18 oz for at least a week of hot food. The push button ignited adjustable flamed burner will boil 2 cups of water, pre-measured from the insulating bottom cup, in 2 minutes. Once boiled you can remove the 1.0 Liter insulated Cozy cup and pour heated water into your freeze dried meal, or mix and serve right in the cup, and drink out of the insulated lid. 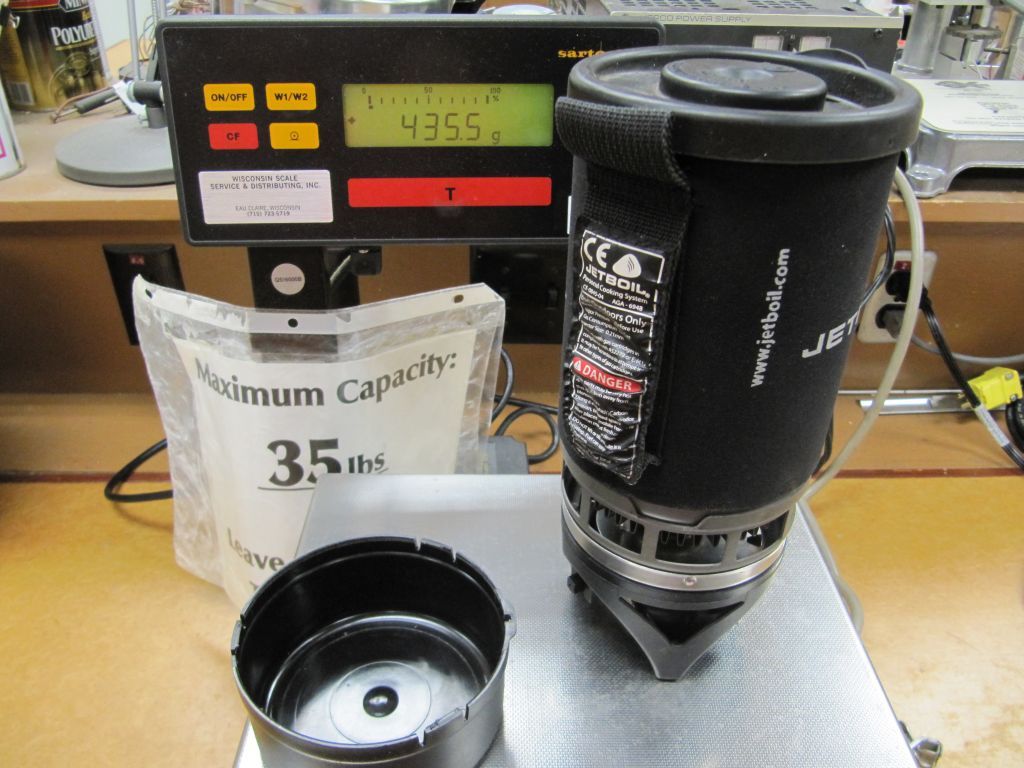 The Soto OD-1R is a little more advanced. It uses a newly developed micro-regulator for precise flame control and to maintain consistent output in cold weather. It weighs in at 72 grams or 2.54oz. The stove added in to the rest of the Jetboil components lightens the weight of the whole system to 335 grams or 11.82 oz, about 3.5 oz lighter than the Jetboil combo, and a little more efficient. The Soto is designed for use with a lightweight pot or cup. I modified my Jetboil cup for use with the Soto stove. I milled out 3 slots in the bottom of the cup to match the “legs” on the Soto. This set-up is not quite as stable but if you pick a good level spot it works great. 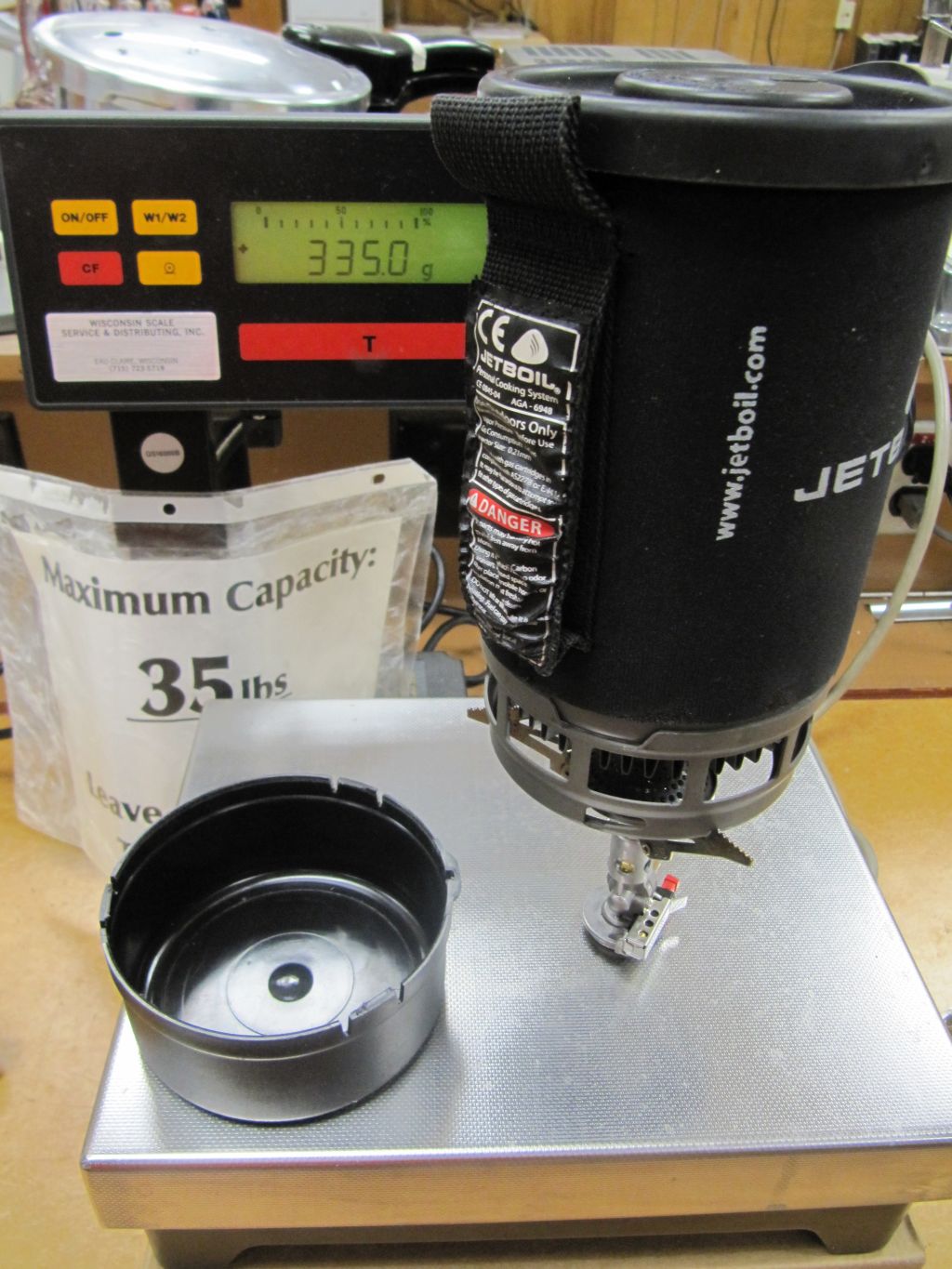 The Esbit stove is the last of the 3 in this article. I actually carry this stove sometimes as a back-up. It is lightweight, and foolproof. It doesn’t boil water quite as quick as either of the other stoves, but what it lacks in efficiency it makes up for in reliability and weight. This little gem comes in at about 4” x4”x1” with 4 fuel cubes nested inside for 6 days worth of cooking. All weighing in at a mere 172 grams or 6.067 oz. You will need a pot to boil water in. My titanium Snow Peak weighs in at 53.86 grams or 1.9 oz. So for 8 oz you get 6 days of very reliable cooking. There is no regulating the flame with the Esbit fuel cubes, but you can blow them out when your water boils to preserve the remaining cube for another meal. One disadvantage is the black carbon build-up which gets deposited on the pot from the flame. A little piece of Scotch Brite pad and some water will polish it up nicely. I would also recommend throwing in a couple of pieces of aluminum foil. Remaining fuel cube can be wrapped in the foil, and it can be used to store the stove in to keep the carbon buildup from wiping on anything else. You can also use the foil as a wind break for the stove, or lid for the pot.

To summarized the three, for most backcountry pack in hunts I will use the Soto stove adapted to the Jetboil cup. I get convenient nesting of all the items, quick efficient boil times, and great reliability, while only giving up a little stability and ease of use. The Jetboil PCS cooking system is great for base camp or spike camp hunts. We still have the component nesting, good boil times, reliability, and the quick easy assembly and disassembly. We gain a few extra ounces, and lose a little boil time over the Soto. The Esbit is extremely light and very reliable. If weight is an issue this is the way to go, or to carry as a backup on long pack in hunts where an extra 6-8 total oz could mean the difference between hot and cold dehydrated meals for a week or more. All of 3 of these stoves work for their intended purpose and have been proven in the field time and time again. Its up to you to decide what you need out of your equipment and go from there.