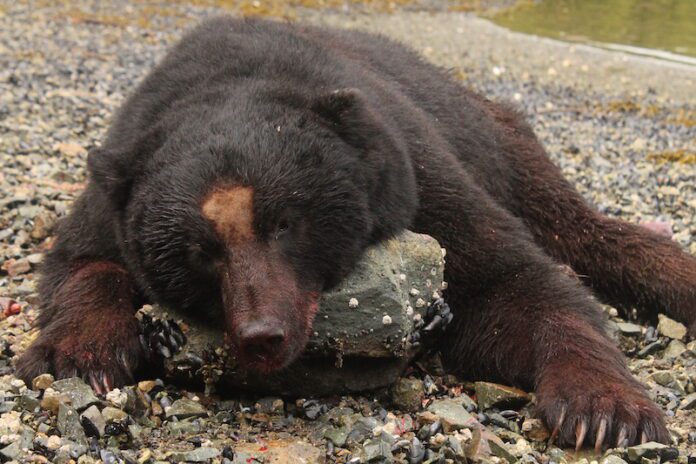 As a kid, I was around black bears a lot but never hunted them. Growing up on Prince of Wales Island, I saw them so often every spring, summer, and fall that they always remained cool, but the novelty had definitely worn. I saw them on beaches, at the river, next to the road, on our deck. There are a few encounters that stick out.

Bear And A Bicycle

There was the time I was riding my bike home from the river with two fish dangling from my handlebars. My brother and I came around the corner and there was a black bear standing on the left shoulder, 25 yards or so ahead. I hit the brakes. The fish swung forward and one tore free and hit the asphalt.

“Don’t stop!” my brother yelled as he pumped his legs harder, crossed to the opposite shoulder, and continued past the bear. I reached down, grabbed the fish, stuffed it into my jacket, and frantically followed.

I remember when a bear ran across the road and actually hit my friend’s car on her drive to school one morning when I was a senior. She was crying but all my friends and I could think about was driving out the road to get the dead bear and bring it into 1st hour applied science. It made total sense. Science! Our teacher didn’t go for it.

I learned a lot being a kid on Prince of Wales Island. Now as an adult hunter of bears, I think back to all that I observed and mine it for tactics. While my spring hunting is often passive – I go bear watching more often than I go shooting – I do look forward to summer sausage and bear chorizo. Maybe you have a bear hunt in your future? You’ve likely looked up how to judge bear size and sex, how good their sense of smell is, or how poor their vision is.  Here are a couple of things to keep in mind before you go.

I shot my first bear on a grass flat next to a creek on a warm sunny May evening. We posted up in the back of an inlet with no previous scouting or e-scouting. We paid attention to the wind, sat in a little finger of timber, and waited. It took maybe five minutes. We had the bear taken care of and back to the truck by dark. This is the quintessential Southeast Alaska black bear hunting story. The evening is best….but not the only time to hunt. 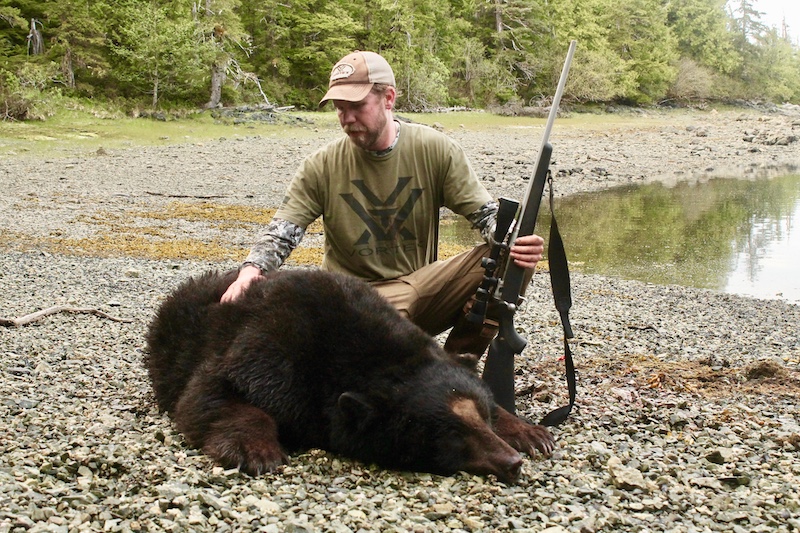 While evening might be the most effective time, bears still exist at other times of the day. Bears will emerge from the timber to soak themselves in the cool ocean or river water when it’s sunny. They will also utilize the shade of trees or even the shadow of a mountain to come out earlier than you might expect. This is why you shouldn’t just wait until it’s getting dark to sit on a flat. The bigger boars might be more likely to wait out the day a little more, but that doesn’t mean the first bear is always the smallest. 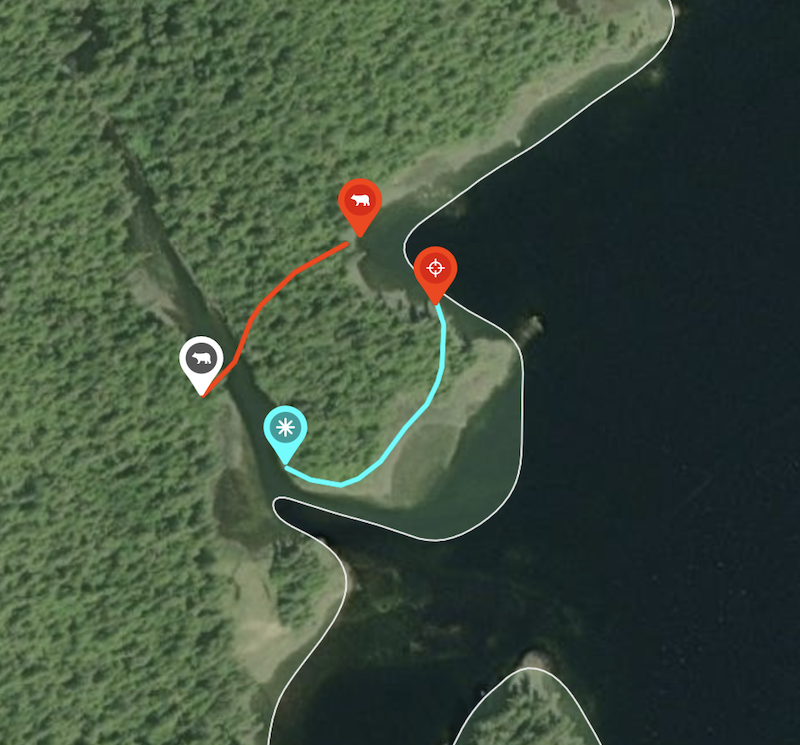 A few springs ago I was hunting a south-flowing creek with a nice grass bed to the west. To the east was a finger of timber in which I set up around noon. The east and southeast sides of the beach took the early brunt of the morning and noon sun, but by early afternoon, the beach was in the shade. Sometime in the afternoon, I watched a bear walk across the creek and into the woods. I assumed it would emerge on the beach on the other side to eat, flip rocks for mussels, or just continue his daily circuit. I cut through the woods and took him once he walked clear. That bear (the skull measured 19 15/16”) was loaded up and back to the boat well before sunset.

It’s easy to look for huge tidal flats and figure that’s the best place to be. Sure, those areas might provide the best opportunity to see the most bears, but the more beach exposed by a low tide means there are a bunch more logistical concerns.

Download an app like Navionics to give yourself an idea of the terrain and tide because these are just as important as the e-scouting you do on onX or Basemap. It will better inform you of what happens when the tide is low. Some inlets in Southeast Alaska look easily accessible, but even a foot of tide drop can leave you hundreds of yards from where you thought you’d be able to get your skiff. A riverbed can provide a few extra feet of depth and help you gain access, or escape inlets if the tide isn’t ideal, but remember, if you get in on an outgoing tide, it takes a long time for water to return to where it was. 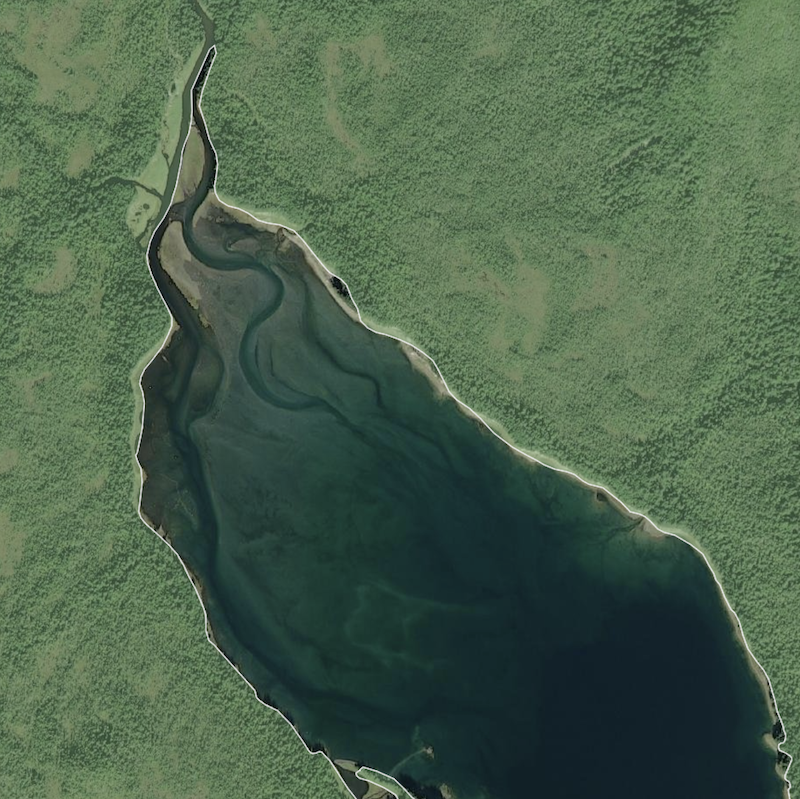 Notice the outline of the riverbed shown on the OnX screenshot above.  This will not be visible when you are on the water, but it can help with scouting. The Navionics app below shows how shallow the inlet gets. Knowing this will help keep you from attempting an inlet that is too shallow for your skiff. 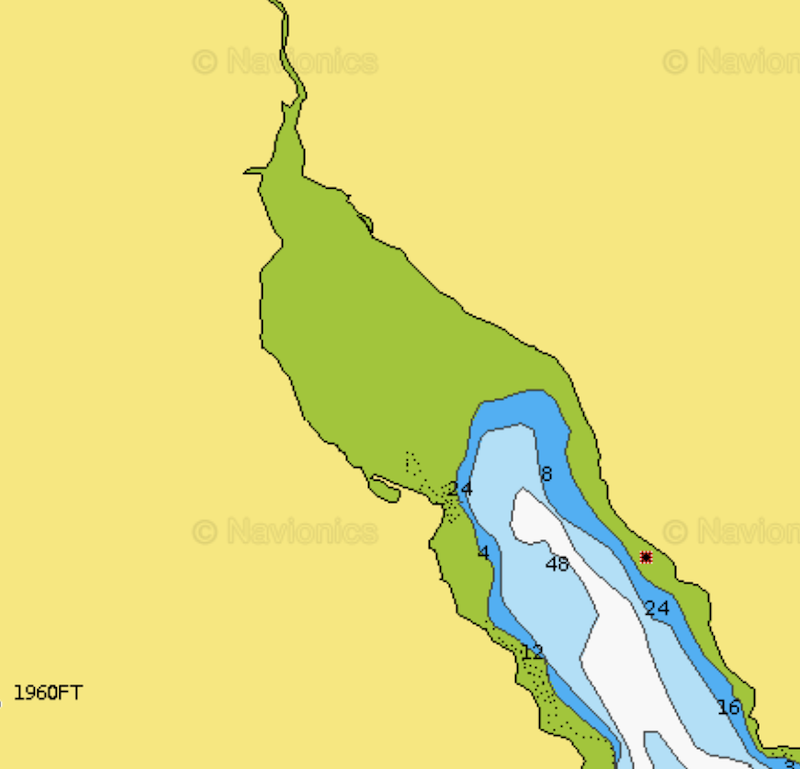 There can be some big tides in spring, so it’s important to be observant.

If the last high tide was a 13.8-foot tide at 11:39 a.m. and I wasn’t there to see how high the water came, I can look around and find the least disturbed (sometimes even still wet) debris that indicates the level of a 13.8 tide. But if I think that’s the high tide line, and the next tide is a 16.2, I could be in trouble. An extra few feet of tide can flood the tent of an unprepared camper who wants to sleep on the beach or float the anchor if I haven’t put out enough scope for the skiff and the wind picks up.

It can be funny to have your skiff go high and dry, but banging on rocks or having to push it to the water can damage the aluminum. It makes for an epic post on social media, but those are the types of things that get hunters in trouble. It’s one thing to rent a car and abuse it, it’s another to damage a rivet for the next person who uses the skiff you let get pounded by a bed of rocks. 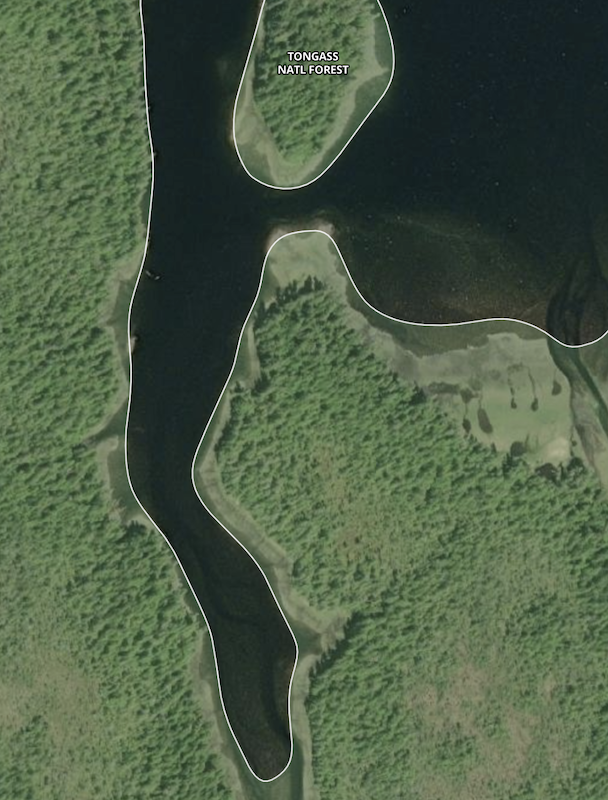 Notice how the e-scout above would make this inlet look easy to access by boat. However, Navionics clearly shows it could be a one-way trip back in there, especially if the next high tide is lower than the one on which you got in there. 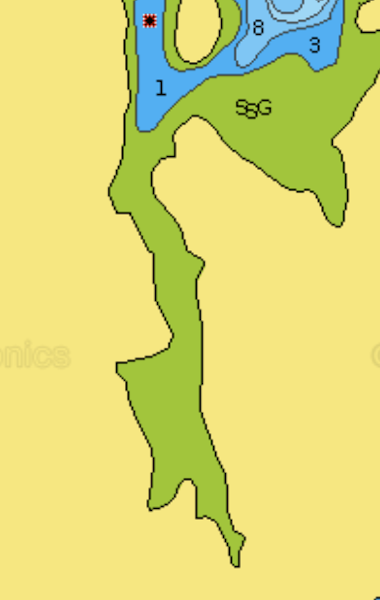 The biggest flats attract the most bear hunters. Some of the biggest bears I’ve seen however have not been in these locations. They have been in smaller coves near the big flats. It’s as though they have let all the riff-raff share the big grass flats, while they have claimed their own private cove.

Rivers with salmon are the best places to find bears in the fall, but small pockets of grass by tiny creeks can hold bears in the spring. Don’t assume the bigger grass flats are always better.

Know that it’s not just about evening sits and scouting shores, as these pursuits will not tell you the entire story. Download a good app that will show you where you are at with the tides and how that will impact your hunt.

And don’t do anything that requires a rescue.

Comment on this article or ask Jeff questions here.

Jeff Lund is an outdoors columnist for the Juneau Empire and author of A Miserable Paradise: Life in Southeast Alaska.

His podcast The Mediocre Alaskan Podcast is available on Spotify and Apple Podcasts. An archive of his work, hunting tips, and podcast episodes can be found at www.TheMediocreAlaskan.com