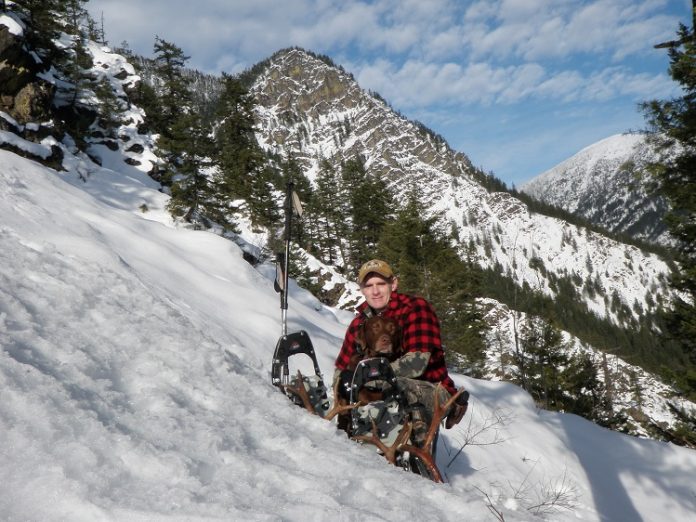 Part I, The Archery Bull

Elk Antlers—what is it about these and the animal that carries them that fosters the addiction of elk hunting? Don’t underestimate its power.  Once it is in your blood you will find yourself day-dreaming about screaming bulls and scheming ways to hunt more!  Any fanatical elk hunter will tell you that regardless of how successful a season has been, by the last day, you’re already planning the next fall adventure!

When I look back at 2013 there were a lot of highs and a few lows, but a large part of the experience was the planning and preparation that led to the opportunities created.  In my book, fitness is very high on the list of things we can do to be a successful elk hunter and has been the single biggest factor in filling my tags over the last decade.   While there are many variables we can’t control—Mother Nature, other hunters, and predators being a few—we can all prepare physically.   We can buy better gear and we can research online, but we cannot buy fitness. We all have to put in the time and sweat to achieve it.  While I’m no Olympic athlete, I train for all the challenges elk hunting can present from chasing bugling bulls to getting deep and steep in the backcountry.   In the next three articles, I’ll recap how I prepared for the 2013 season and the results that followed in an effort to help you become a better elk hunter.

The mountains are always calling come January to search for some freshly dropped antlers and my boy Magnum is always game for a fun day afield.  We’ll make at least several trips between January and April.  Shed hunting is very similar to elk hunting, in that you can make it as difficult as you want.  Many days have get-ups in the 3:00 AM range, a long day of driving, machining in, hiking and then home late at night.  Nothing beats a beautiful sunny day in the Mountains with fresh snow and antlers to boot! 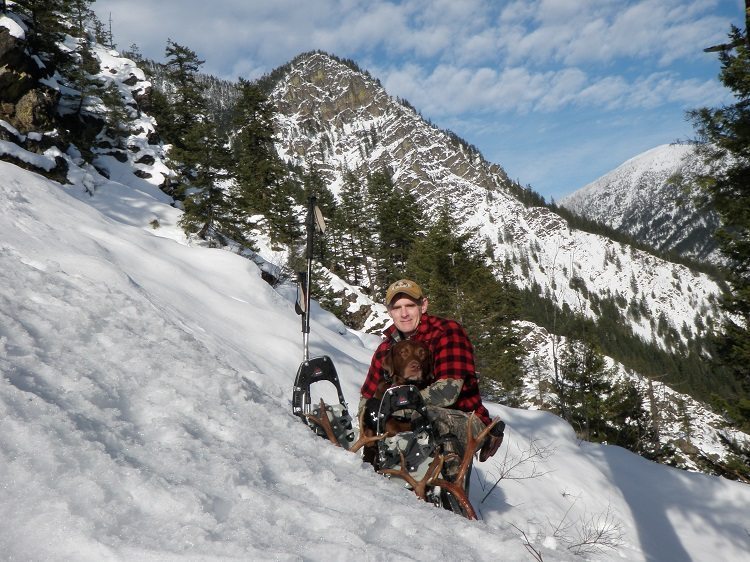 The outings also give me a great opportunity to train in a different fashion, utilizing snowshoes to push the heart rate very high in a relatively short period of time.  This is a low-impact activity that gets you outside and can be a full-body workout with trekking poles.  During the week, I continue some form of weight training and cardio on the treadmill.

One thing about shed hunting is you can’t call to them, nor do they walk to you—it’s about putting down boot leather. The more ground you can cover in the right area, the more sheds you will pick up.  It is a great time to test your fitness and have fun with friends.

Once April hits, the elk antlers are really starting to fall and my opportunity to see what bulls have made it through the winter and explore my hunting areas is peaking.  2013 was an average snowfall year, so antlers were dispersed, but there were several very successful days finding beautiful antlers. One bull in particular was massive and would be one I pursue and place a trail camera in his area. 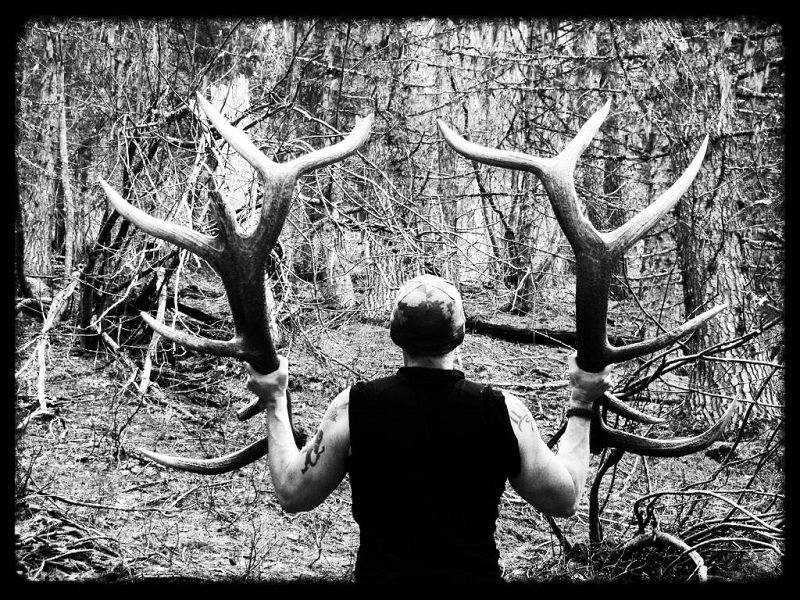 Once Memorial Day rolls around—with summer green-up, bugs and, warmer temps—shed hunting opportunities are about complete.  I then turn my focus to tuning the equipment, shooting the bow and rifle, and prepping for season that lies only 90 days away.

As with any summer, the months leading to September blew by with puddles of sweat, hours spent shooting, checking gear, setting up trail cameras, and planning the hunts for my two Idaho Elk tags and Montana combination Elk/Deer tag.  Soon, September was here and I was out enjoying the woods of Idaho.

My technique most years has been to keep hiking and calling, looking for a bull that wanted to play the elk-talk game (this was why I hit the treadmill on 15% grade all summer).  Historically, the bugling action would start to pickup around the 10th of September.  This year, September 18th arrived but the action had been relatively slow.   Some years, the calling action can be better at night and sure enough, that evening provided my first intense bugling session with me in between two bulls.

For the next several hours until close to dark, I was within 40 yards of both bulls, but never had the opportunity to see either one. For anyone who has hunted North Idaho, this is commonplace, as the brush is very dense.  Often you never see a bull until he is well under 20 yards.  The country offers the opportunity for aggressive calling moves, but at the same time can be extremely frustrating as you may get very, very close, but still not get a shot.

The evening hunt was fun and the cot in the wall tent felt great. Before I knew it, the alarm was ringing at 4 am.  I took my morning dose of Naproxen to loosen up these old bones. This day, September 19th, offered some limited bugling action, but was uneventful.   That evening, I had received a tip on some bugling bulls, so I headed off to that area.

I had hiked only 20 minutes when I heard a bull light up and then another.  They were in some dark timber and across the valley.  I listened to them engaging each other as I closed the distance.  To this point I had not made a sound, which is not something I tend to do, as it is against my nature to not use my calls.  But I would change it up this time.  I closed to within a 100 yards and could see cows funneling down 20 yards away with the herd bull up on the ridge at 75 yards.  The other bull seemed to be heading his way.  I had the wind in my favor so I played the odds and stayed silent.

I watched the cows for an hour as they had me pinned down. These are the times everything is magnified.  Your senses are on end and your muscles get fatigued as you try to be a statue. With light fading, the cows filtered off.  I took up the chase until dark chasing both bulls and laying eyes on one—a medium sized 6-point.

I was back in the same area the next morning.  Off in the distance I could hear a mature bull glunking and a few other bulls sounding off.  I responded to one of the bulls across the drainage and the game was on.  He had a satellite bull and a large herd of cows with him. Over the next two hours I would close to within 75 yards, engage the herd bull and then he would take his cows with him.  If a bull will continue to bugle, then I will keep at him and as long as I can keep the wind in my favor, knowing a shot opportunity may present itself.

We went back and forth until I had busted up his harem and chased off his satellite.  At times I was literally chasing after him, still never laying an eye on him, nor letting him get my wind.  It was at this time, I closed within 100 yards as he bugled and I gave some really sweet cow calls. He came unglued.  I could tell he was coming in quick to gather what he thought was his harem.  As the herd master bugled and approached, he presented a 14-yard shot.

Thirty minutes later, I found him, just 40 yards away.   The hunt was everything you could want—excitement, adrenaline, lots of bugling action, a beautiful bull, and a freezer full of meat. The best part was that I had two more elk tags to fill and a few weeks to recover.  It was like Christmas three times over for an elk hunter! 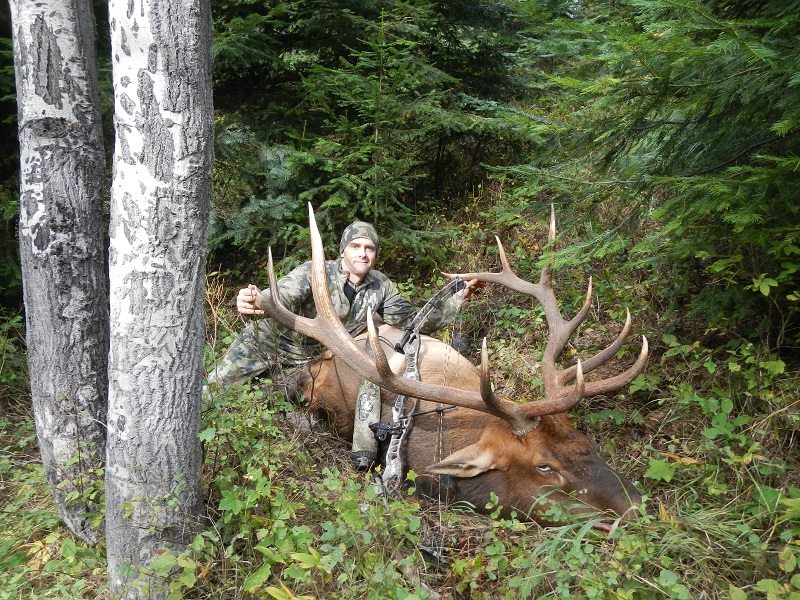