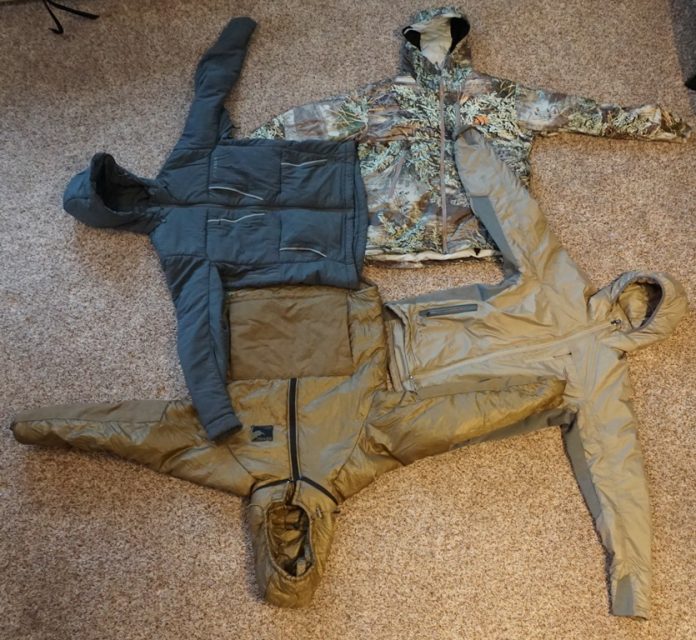 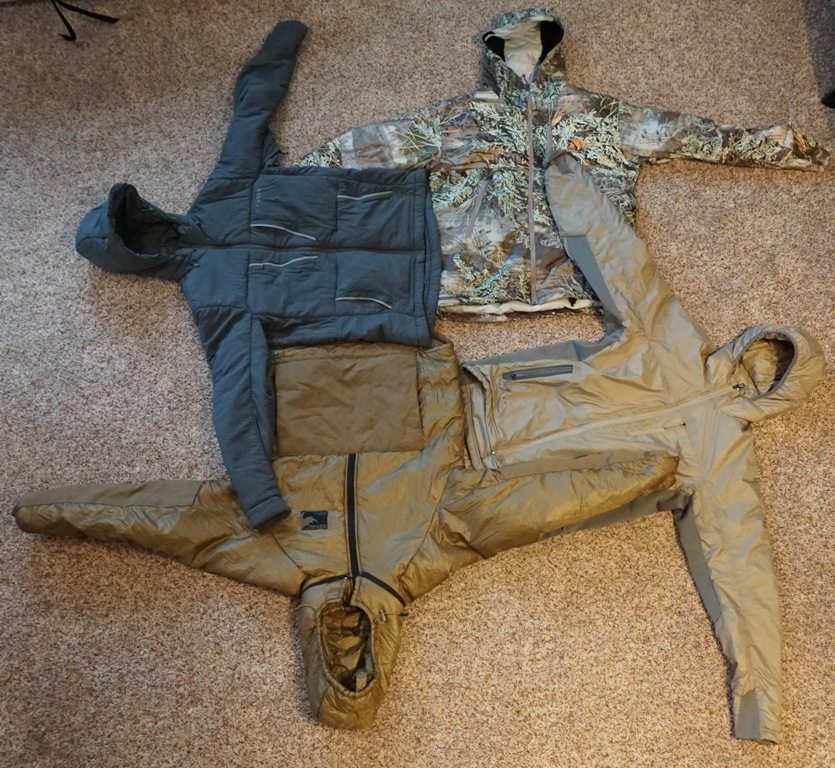 Puffy jackets. Aside from backpacks, puffy jackets are cussed and discussed more than just about any other backpacking gear. A puffy jacket is a key ingredient that I ensure goes into my pack on just about every backpacking trip, regardless of the weather or time of year. Temps during the Alaskan summer can vary from 80 degrees to mid 20s without much warning, so keeping a lightweight but warm puffy jacket in your pack is a good idea.

When I was asked to do a puffy review in late spring of this year, I replied by saying I wanted at least six months to gather data and that I only wanted to review a maximum of four jackets so I could really give each one a good test.

I wanted to compare apples to apples as best I could between what I felt were some of the best synthetic puffy jackets offered from “hunting specific” clothing companies. The four jackets I ended up choosing were:

Below is a quick and dirty table showing on paper how these jackets stack up:

My rationale for choosing these four jackets to review was mainly that they all had a few things in common that I look for when buying a puffy jacket:

While I like to use down puffy jackets often, I still feel there is an advantage to synthetic insulation, especially when used in extremely wet environments. 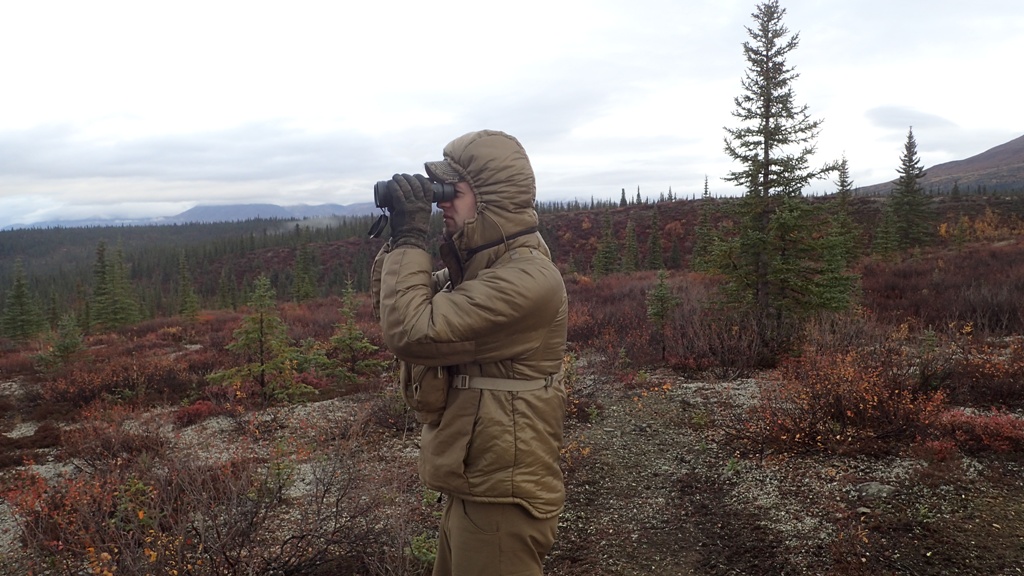 Likes:
• Warm. The warmest jacket of the four jackets tested here.
• Sizing seemed spot on. I ordered a Medium for my 5’9 165 pound frame and the fit was great.
• Removable hood. This is very cool as it gives the consumer the option to run a hood or not.
• Cordura reinforced kangaroo pouch and under-the-arm sleeves. The added abrasion resistance in these areas is nice if wanting to do much hiking and backpacking in colder temps through brush and alders.
• The Kangaroo pouch. This insulated pouch is designed to accommodate running the waistbelt of a pack through it. While I never considered this application before, it certainly allows the waistbelt to ride much better than running it over or underneath the jacket. While I very rarely hike in a puffy jacket for any length of time, its nice Kifaru thought of this and I can see it being especially handy for those that backpack in their puffy jackets often. Also because the pocket itself is insulated, its great for sticking your hands in there to warm up.

Dislikes:
• Why is this thing only offered as an Anorak?!?! While I can appreciate the fact that the Anorak saves both weight and cost, donning and doffing the jacket isn’t nearly as handy as a traditional full zip. I would like to see Kifaru offer a full-zip jacket in addition to the Anorak model, even if it means additional cost and an extra 1-2 oz for a full-length zipper.
• Lack of pockets. Yes the Kangaroo style front pouch is nice, however its not like you are going to put anything in it while you are hiking as there is no option to zip it up. Even a simple chest zipper (Napoleon) that could accommodate a snack bar, or a GPS or rangefinder, or other odds and ends would go a long ways over not having a single-zippered pocket at all.
• When putting on the jacket and sliding your hands through the cuffs, an inch or two of the jacket’s inner lining also comes out beyond the sleeve. One has to stuff the lining back up under the cuff once the jacket is on. This is especially true if your hands are wet or damp. None of the other jackets tested had this problem. 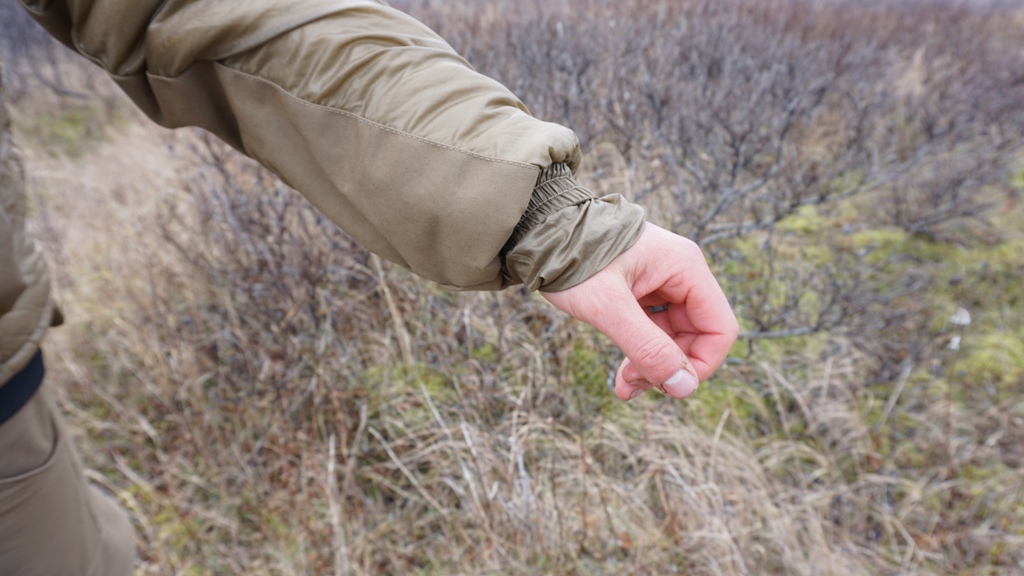 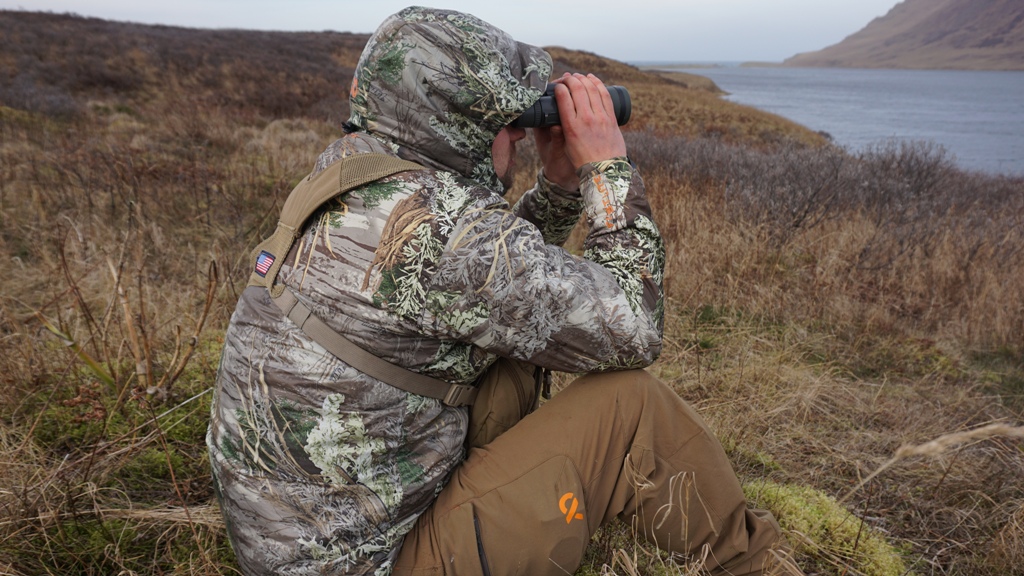 Likes:
• Pockets. There is one Napoleon pocket and two traditional style pockets along each side, all zippered. Makes it great for stashing stuff if needed or giving more organization to access things while on the move.
• Like the Kifaru Lost Park, I ordered the First Lite Uncompahgre in a size Medium and it fit me great.
• Cozy. The fleece lining along the neck and chin area makes the jacket “feel” warmer and more comfy when fully zipped up with the hood on. Its obvious First Lite paid special attention to detail in this area.
• Warm. While not quite as warm as the Kifaru jacket in my opinion, the added features of a full zip to take the jacket on/off, as well as the extra pockets make up for the fact that it is the second warmest jacket tested here.

Dislikes:
• Zippers. While I appreciate First Lite’s attempt to make the zippers a bit more waterproof with the orange material running along the inside of the zippers, this makes them not run nearly as smoothly as the zippers on the three other jackets. This is an insulation layer and if it’s raining hard enough to worry about getting wet through your zipper, its time to put on a rain coat.
• Noise. This jacket, just like the Sitka Kelvin Lite Hoody and the Kifaru Lost Park, are loud and has the typical “swish swish” sound you would expect from most puffy coats on the market. This is far from a deal breaker for me as I have just accepted this as an issue with all puffy coats, but it’s worth noting for those new to puffys. 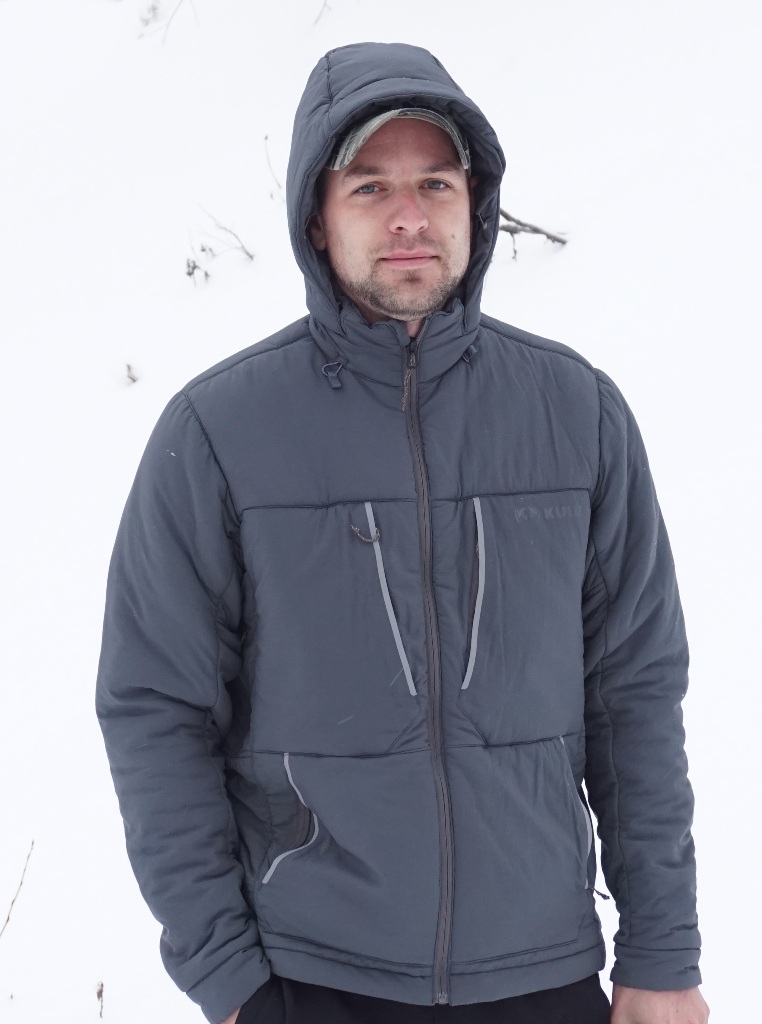 Likes:
• Quiet. This jacket is much quieter than any of the other three jackets reviewed here. Rather than having typical nylon-like shells, the outer fabric is stretchy and not coated with anything , making it quiet and comfy.
• Pit zips. This was the only puffy jacket to offer pit zips. Not a big deal at first glance. However I did find it nice to just stop and unzip them on cold morning hikes as I warmed up but didn’t want to stop and take off the jacket all the way. Pretty cool feature that I would like to see incorporated into more jackets.
• Organization. Complete with two Napoleon pockets and two lower pockets, this jacket offered the most zippered pockets out of any of the jackets reviewed here. While I rarely used them all, having the option is a good thing.
• Light. While not the lightest jacket tested here, it would have been the lightest if I had had ordered up a size in the Sitka Gear Kelvin Lite Hoody like I should have. At a just a shade over a pound, its pretty amazing how many features Kuiu was able to pack into this jacket and still keep the weight down. 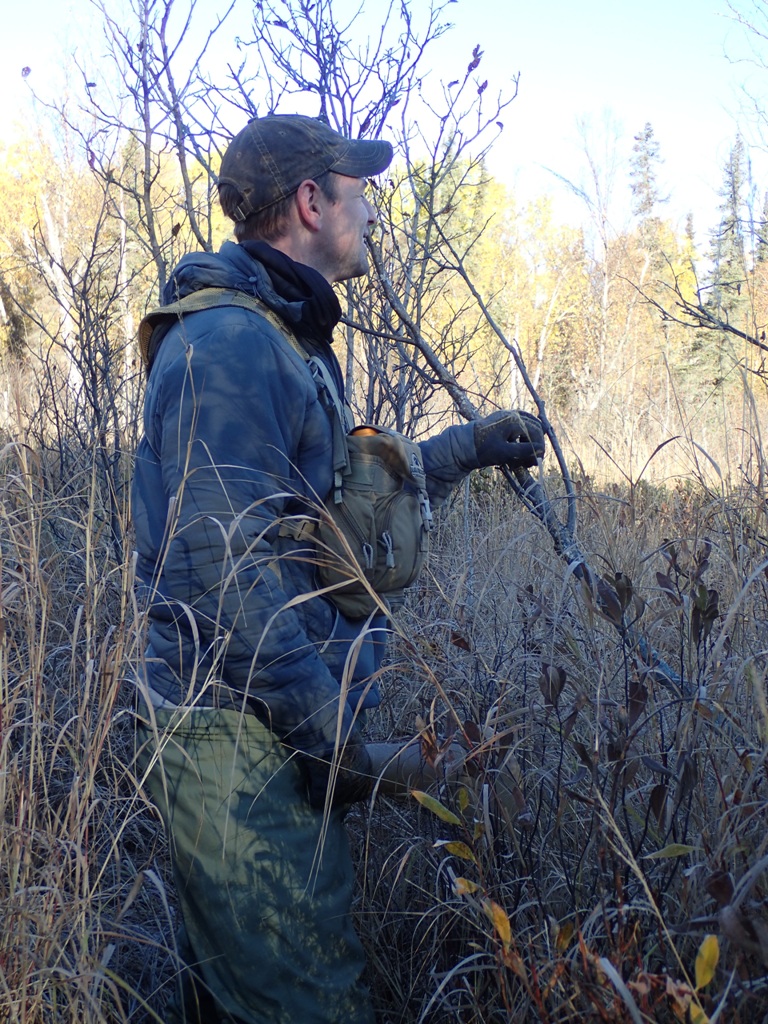 Dislikes:
• Heavier when wet. The same thing that made the jacket so quiet (the face fabric chosen) also makes it more susceptible to gaining weight if you get it damp or wet. The stretch fabric is more prone to soaking up moisture than standard puffy shells, thus becoming heavier in damp conditions. Generally not a concern, as I usually quickly put on a rain jacket when things get wet but certainly something to be aware of.
• Sizing. Given my experience with previous Kuiu garments I have owned, I knew to size up and order a Large instead of a Medium. I am sure glad I did as the large fit me just perfect and I certainly wouldn’t have wanted to go any smaller. 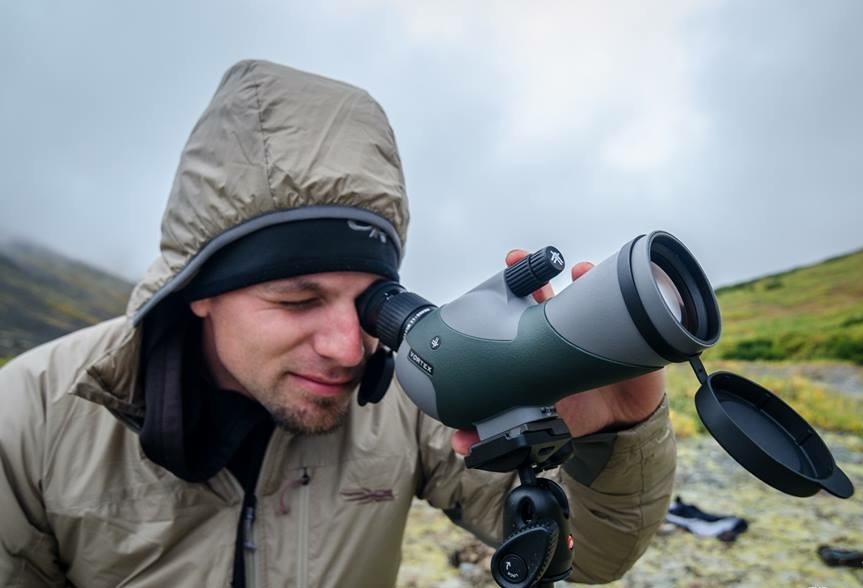 Likes:
• Light. The lightest jacket in the review.
• Stretchy. The side panels of the jacket stretch to help accommodate for its very athletic fit. The jacket certainly moved with me as I hiked or did tasks around camp.
• Pockets. As I mentioned above, just like the First Lite Uncompahgre, Sitka Gear offered plenty of options to stow things in this jacket with one Napoleon chest pocket on the left side as well as two traditional pockets along the sides. Its good to see Sitka Gear didn’t skimp on pockets in an effort to make their jacket lighter.

Dislikes:
• Not as warm as I’d like. While this is the lightest jacket in the group reviewed for this article, it is also the least warm. The stretchy panels along the side that allow for freedom of movement, also seem to let out heat. Also, I don’t feel as though the 80 g/m2 of Primaloft is enough for my needs as a stand alone puffy jacket for most of my uses.
• Sizing. I ordered a size medium as I often do. I figured at 5’9 165 pounds that I wouldn’t need a size large for a jacket I often layer underneath my raingear. The size medium felt very small, especially so in the arms….and I have T-rex arms. Anyone with any kind of muscle tone in their arms should likely size up one if not two sizes.
• The hood cinch adjuster, for lack of a better term, on the back of the hood is much larger than it has to be. So much so that it is extremely uncomfortable to wear the hood while laying down on your back. One cold night on top of a mountain during a sheep hunt this fall we bivied out without sleeping bags and the dang thing kept gouging into my head. By comparison the same adjustment on the First Lite is approximately one quarter the size and not noticeable when laying down on it. However, Kifaru and Kuiu I feel solve this problem altogether by having the hood adjustments on both sides of the collar to tighten the hood up so your head never has to rest on any hard plastic cinches when laying down. 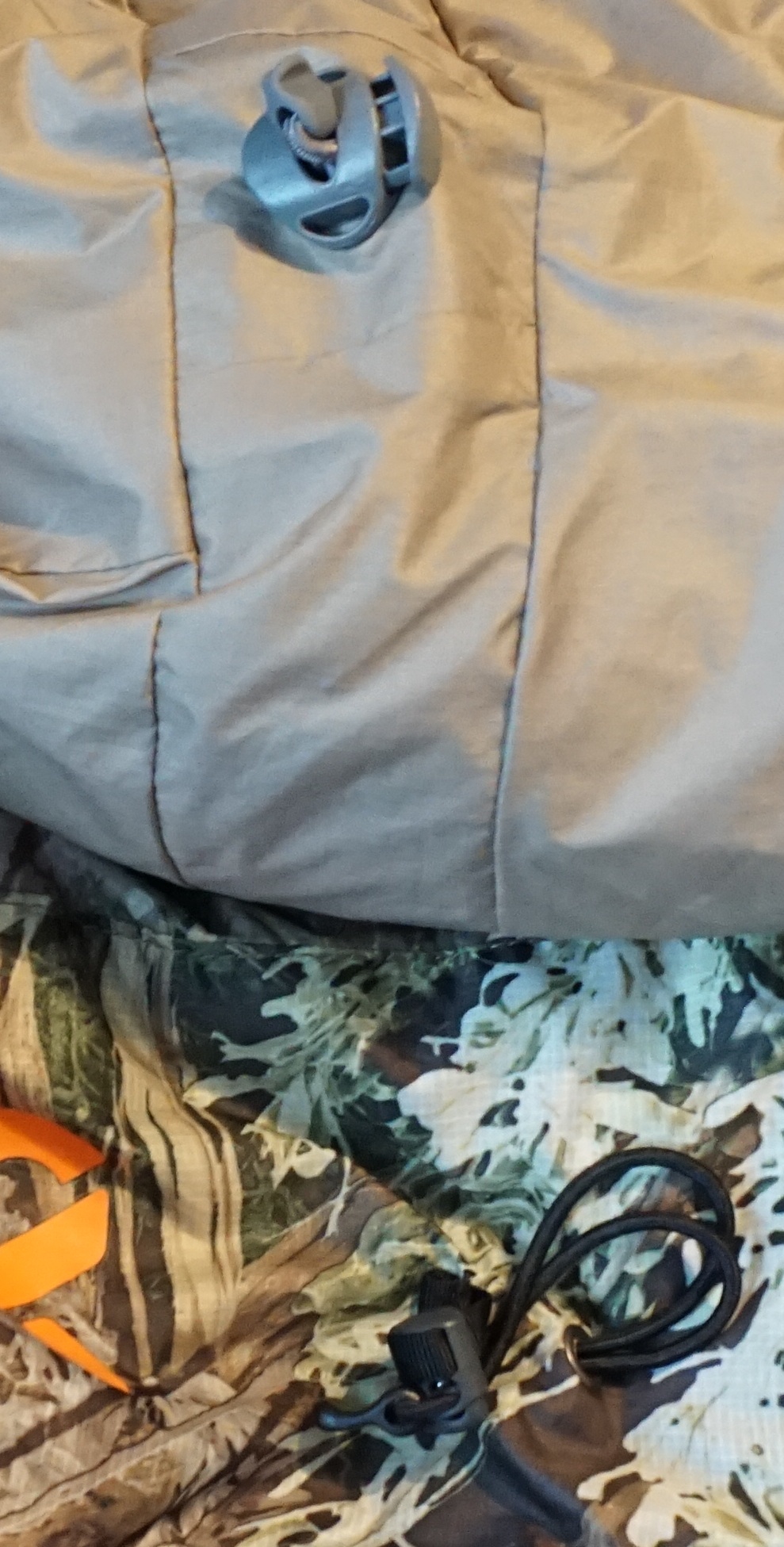 My preferences are often different than many other consumers so I will refrain from picking my favorites in this article and just let you draw your own conclusions based on my “likes/dislikes” for each jacket above. All the jackets performed well. While some performed better in certain situations than others, I believe each fills a niche based on certain consumer’s preferences. I hope this helps you make a more informed decision when choosing which jacket fits your needs best. Stay warm out there!