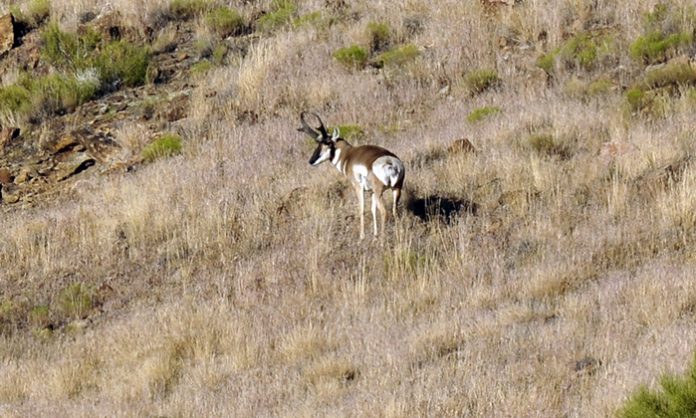 I was making the long drive home from Wyoming after taking an exceptional buck when I realized I really needed to improve my antelope field judging speed and accuracy. I had just harvested my best buck, but I didn’t have a good feel for what he might score before or after I pulled the trigger. I didn’t think he would touch the 80″ mark, but my curiosity and anticipation grew with each passing mile marker. 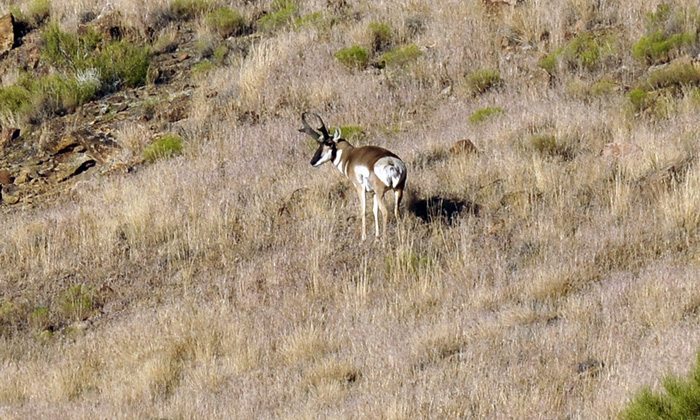 After I got home and measured my buck I was surprised that he easily surpassed my initial impressions and goal for the trip. He grossed 82 1/8″ green and is the biggest antelope I have harvested to date. He has given me the bug to better myself as an antelope hunter and motivated me to improve my field judging capabilities so I won’t be tempted to pass a trophy like him in the future.

Antelope horn length seems to be what most people judge a quality trophy by. Similarly, people often judge mule deer by how wide they are. While mule deer width and antelope horn length are both important and noteworthy measurements, neither are good indicators of the animal’s overall trophy potential. The Boone and Crockett (B&C) scoring system takes into account three different aspects of antelope horns to determine score. Mass (circumferences), horn length, and prong length.

Mass is the most critical element of a pronghorn’s score. According to B&C statistics, 49% of the average record book pronghorn score is due to the circumference measurements. That figure does not account for the mass that is also part of the prong measurement. Prongs account for an additional 13% of the score and horn length accounts for the remaining 38%.

Statistically speaking, mass is king, then horn length, and finally prongs. However, most experts think that length is the least important element since most trophy bucks will be in the 15 – 16” range and it takes an extremely long horn to make up for poor mass. A horn with ¼” larger circumferences will score the same as a buck with a full inch of extra length. Prongs are usually considered second most important since they will make or break the score of a buck with good length and good mass and they are often overlooked and hard to see unless you have plenty of time to watch the antelope.

I measured several mounted bucks to give me references I could quickly compare to an antelope’s horns in the field. I found that the eye typically measures two inches in length or a little over. The ear is in the ballpark of 6” long but may vary depending on where you are hunting. I use these measurements to help me judge pronghorn on the hoof. 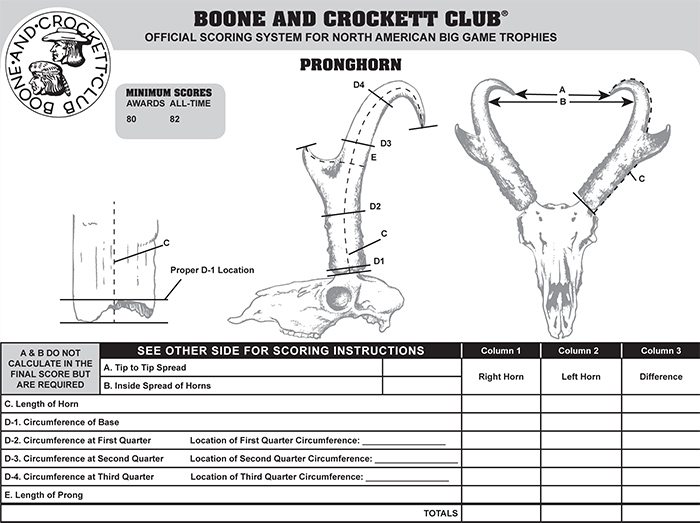 Circumferences are measured at four equal quarter points of the horn. Measurements are taken at the base, at the ¼-length, ½-length, and at ¾ of the full length of the longest horn (See D1-D4 in the B&C diagram). For example, if the longest horn is 16″, you would take circumference measurements at the base, then at 4”, 8”, and 12”.You can use the width of the eye and the ear to gage the mass at the base of the horn. A trophy buck will have bases that appear nearly 1.5 X wider than the eye. A great trophy’s first two circumferences (D1 & D2) will measure close to 7”. To double check mass, make sure the horn from base to prong appears wider than the flared or widest part of the antelope’s ear.

Prong, shovel, digger, cutter, scraper… There are plenty of names, but only a few considerations to keep in mind when judging the prong. An exceptional prong is over 6”. The prong is measured from the back edge of the horn to the tip of the prong along the top edge (E). Because of this, curved prongs tend to measure out much longer than they appear. Bucks with exceptional mass above the prong will generally have better prong length as well since the width of the horn is part of the prong measurement. Since the ear is approximately 6” long it can be used to judge trophy prongs. A prong equal to or exceeding the ear length is what you hope for.

The method I use to measure horn length is fairly universal among antelope hunters. I imagine the ear being moved up to the base of the horn. Then I see how many ear lengths I can mentally stack along the length of the horn. Similar to the prongs, the more the horns curve, the more length they will tend to have. Add up the ears and you will have the approximate length of the horn. The average B&C trophy typically has at least 15 ½” horns so you want to be able to see 2.5+ ears of horn length.

Nothing can replace practice when it comes to becoming proficient at judging antelope. The easiest way to get some repetition is to judge antelope at sport shows, sporting goods stores, and taxidermists. Magazines and websites can also help, but certain features like prong curvature and the curve at the tips of the horns can only be evaluated accurately when seen from a couple different angles. That’s why it is a great idea to take photos and video while you’re scouting. You can analyze the video with friends back at camp to help get a group opinion on potential trophies. Freeze-frame the action when you have the best view of each feature so everyone can comment. You can also have a contest where each person guesses the score. 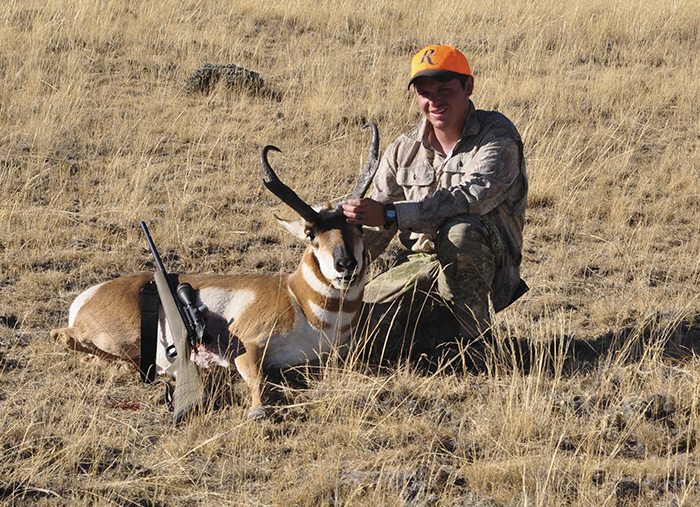 With practice this information can help you make better decisions in the field and will also help you get a better idea of what makes a trophy antelope in your mind. Boone and Crocket sets the official standard, but the real value and size of a trophy is in the eye of the beholder.