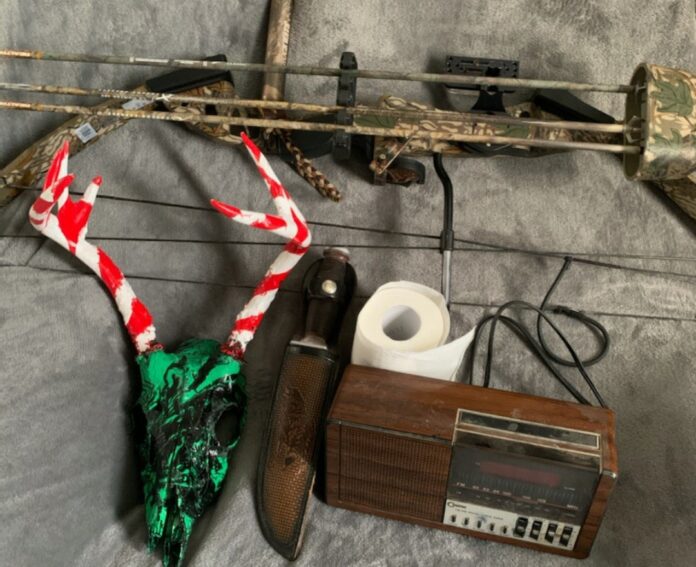 There’s no such thing as the lazy days of summer for my rugged husband.  Since that season precedes fall and fall symbolizes hunting, everything is geared toward his ultimate goal—getting a big buck.  And because just about anybody can simply shoot a deer, this big brute of a man must kill the deer the challenging way—with a bow and arrow.  Starting in June he sets up his tree stand, and for the following four months if I wish to get a glimpse of him, I must turn my eyes toward heaven, and from eighteen feet up in the tree, he’ll be aiming his bow and arrow at a deer decoy, some thirty yards away.  And darn if he doesn’t hit the deer’s vitals— almost every time.

“Yep, I’m going for the clean kill,” he reassures me.  “None of that sissy crap catching them in the hip or leg and having the poor S.O.B. suffer.  No, if I’m a true hunter I must be polished and professional.”

“Looks like you already are,” I smiled.  “I couldn’t help but notice all those accurate shots you made, dead center in those countless little circles.  What keen marksmanship,” I bragged.

“Oh hell,” he hesitated,” I might as well come clean and tell you.”

“First I shoot at my target and THEN I draw those little circles around my hits.”

How refreshing it is to enjoy a hearty laugh with one’s spouse, and I didn’t let on that I knew he was putting me on.  I had read that once in a book, but why not make him think that after many years of marriage he’s still a riot?

“Why does a man spend so many hours out in the wilderness?” I asked him.

“To get the hell out of the house and away from you women!” he winked.

That gentle gesture saved him and I made only one demand of him during bow season.  “Please keep that fox urine away from me because it makes me regurgitate.”

“Quit using those high falutin’ words, will ya?  Just say keep that fox piss away from me because it makes me throw-up.  Besides, you know I have to sprinkle it on my clothing because deer can get a whiff of a human’s scent a mile away.  And their hearing is so acute too.”

And so bow season was upon us and I became a hunting widow.  Methodically my husband goes through his daily ritual—up at 4:00 A.M., out by 4:30 laden down with camouflaged clothing, camouflaged make-up, a grunt tube, a safety belt, T.P, eye patch (to zero in on his hit) a knife, binoculars, earth scent, a pair of deer racks to reenact two sparing bucks, a portable umbrella that attaches to the tree, a hot seat pillow, and oh yes, his bow and arrow.  His equipment costs more than our first house, but I only throw that up to him during our most heated arguments.  All that I’ve described is what he totes in the beginning of bow season.  Two weeks into the sport, and feeling slightly disillusioned and discouraged, he adds to his necessities, two pounds of chocolates that he stuffs into his pockets, a portable radio with earplugs and an old book from his service days, Deer Mable.  No doubt about it, my highly polished, professional hunter was cracking under the pressure.

But then it happened!

Just when you think you should trade your broadheads for those suction –tipped arrows that children five and under can play with, the patron saint of hunters smiles down upon you, but only after you do everything wrong and defy the fates.  My ‘Big Sitting Bull’ was up in the tree when he reached into his pocket for the toilet paper.  He would have to climb all the way down and well, you know.  Who says timing isn’t everything?  Surely this was a cheap shot his bodily functions were pulling on him.  He did his duty just a few yards away from the tree, because sitting for hours and hours can sure tire a guy out.

Once settled back in the tree he popped a few bite-sized candy bars into his mouth and adjusted his earphones when whoops! The radio slipped out of his sticky fingers and fell to the ground.  The song Don’t Cry For Me Argentina was blasting in the woods, and adding to his anger and frustration, he got a whiff of human waste.  He uttered obscenities under his breath, but that didn’t scare the hunting saint away nor the six-point buck that was just a few yards away.

My husband’s chest was pounding out of his T-shirt, thermo underwear, flannel shirt and hunting jacket, and the adrenalin permeated every pore of his body.  Twenty-five degrees outside and he was sweating like a swine!  He adjusted his eye patch and very cautiously he plucked out an arrow, aimed and fired.  Buckets of blood gushed out of the wounded deer, yet he still ran about fifty yards and keeled over—dead.  If not for my husband’s safety belt, who knows where he would have landed?

“It’s not like I knew what I was doing,” he confided in me later.  “Fact is, I did everything wrong.  Whoever heard of nailing a deer with the woods alive with some damn Broadway blockbuster song?  Deer like quiet—QUIET!   And the smell, my smell—a minute sooner and he would have caught me with my pants down!  No, I’m nothing but a tired old coot who has no business parading around like some silly ‘Great White Hunter.’

I softly stroked his bearded face.  “What do you want me to say?” I asked helplessly.

“Say you think I’m on to something, damnit!  Give me a truckload of laxatives and one of those boom boxes to take out with me tomorrow and the deer population will be mine, all mine!

Now I ask you, should I worry about his emotional stability?  Heck no, because I know when hunting season is over, my brave, burly, breadwinner will be back to normal—whatever the heck ‘normal’ is?

If you enjoyed this article, check out Karen’s previous article Hanging Out With Hemingway-Almost

The Maasai and Hadza Hunter-Gatherers