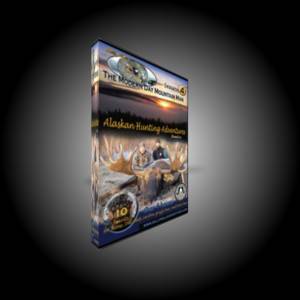 When I approached Billy Molls about an interview for the Rok Blog’s “Who Is” series, I didn’t understand Alaskan hunting much.  Billy mentioned that if I’d review Season IV of the Modern Day Mountain Man series, I’d get a better feel for what it’s like hunting the North Country.

I ordered a copy and in a few days, it was in the mailbox.  I was taken back by the 60-inch moose that graced the cover and noted that the DVD promised four hours of material.

For the next week, when the sun would set and I’d make my way into the house, I’d sit an hour to take it in.  Usually Jodi and the kids frown when I plug in a hunting DVD, but as soon as they heard Billy’s cool and composed voice, “Since I was a young boy, it’s been my dream to hunt in Alaska…”, they fell silent and we’re soon watching.

Billy starts the DVD with a scene he shot in the Ted Steven’s International Airport in Anchorage.  He’s sets the stage for the upcoming 16-day Brown Bear hunts he’ll be guiding.  As he spends the next few days getting to the bear camp, you’ll get a real feel for the remoteness of Alaska and the logistics it takes to hunt it.

The Super Cub footage alone is worth the entire DVD if have an appreciation for good pilots.  The viewer will also get to see all the backpacking gear that goes into making these hunts successful.

Billy spends the next few days alone in the backcountry preparing for his hunters.  The solitude drew me like a moth to a flame.  It gives the viewer a real respect for the guides who can handle the wilderness isolation.

The first hunter is Bobby Morgan looking for a Brown Bear.  During this hunt, you’ll see the brutality of the big boars during the breeding season when they will kill the cubs so the sow will go back into heat.  Billy watches one of these boars for a few days before they get a stalk.  You’ll see first hand why Billy packs a 375 H&H Magnum with 300 grain Barnes Triple Shocks as he and Bobby get in close on the cub-killer.

After another succesful spring bear hunt with a group of guys, Billy meets Jaime Melendez for a fall hunt.  Jaime is a Spanaird who can shoot in real-hunting conditions with the best of them and does it all with a single-shot rifle!  I counted only four shots over a week period where Jaime takes a 37″ Dall, a big Grizzly, and a great Caribou.  This guy don’t miss!

You’ll follow Billy and Joe Kiselica of Syracuse, New York as they do a 55-mile backpack hunt where Joe kills a great, 37″ Dall in Alaska’s Brooks Range.  Joe also takes a caribou at 600 yards.

Although the open-country sheep hunting is simply captivating, it is Jens Knudsen’s 60-inch Alaskan Moose hunt that is the pinnacle of the DVD.   Billy and Jens kill this great bull almost from camp after Billy has spent fruitless weeks looking for a big bull.  You’ll get to experience first-hand the breakdown of this giant as they prepare to float it out to base camp in an overloaded canoe.

Don’t miss the Director’s Cut if you enjoy a little off-color humor.  In one segment, the pilot drops off the hunter leaving him and Billy alone in the Alaskan wilderness.  As the Super Cub disappears over the horizon, Billy breaks into Tiffany’s #1 hit, “I think we’re alone now…” as the hunter nervously laughs.   You’ll also meet some of the other colorful guides- Jim Schwinder and Reno- and hear some possibly true stories of Alaskan hunts from decades past.

Billy’s narration style is humble, fun, and has just the right amount of excitement to keep it real- all given in his genuine Wisconsin accent.

Between meeting hunters from around the globe, the awesome scenery, giant Brown Bears, spot-‘n-stalk sheep hunting, the attention-getting musical score, and Billy’s genuine style, this is a DVD that anyone with a heart for wilderness will enjoy.

You can pick up a copy of Season IV and several other of Billy’s titles in the Rokslide Store.

I’ll be reviewing Billy’s all-bear hunting DVD “Fury in the Alders” in the upcoming weeks.  Look for a chance to win that DVD, too.

As promised in “Who Is Billy Molls”, those who subcribed before “Goodbye George” would be entered in the drawing for The Modern Day Mountain Man, Season IV.  Watch for the announcement in the next few days.  Remember, smart Roksliders subscribe to the Rokblog 😉