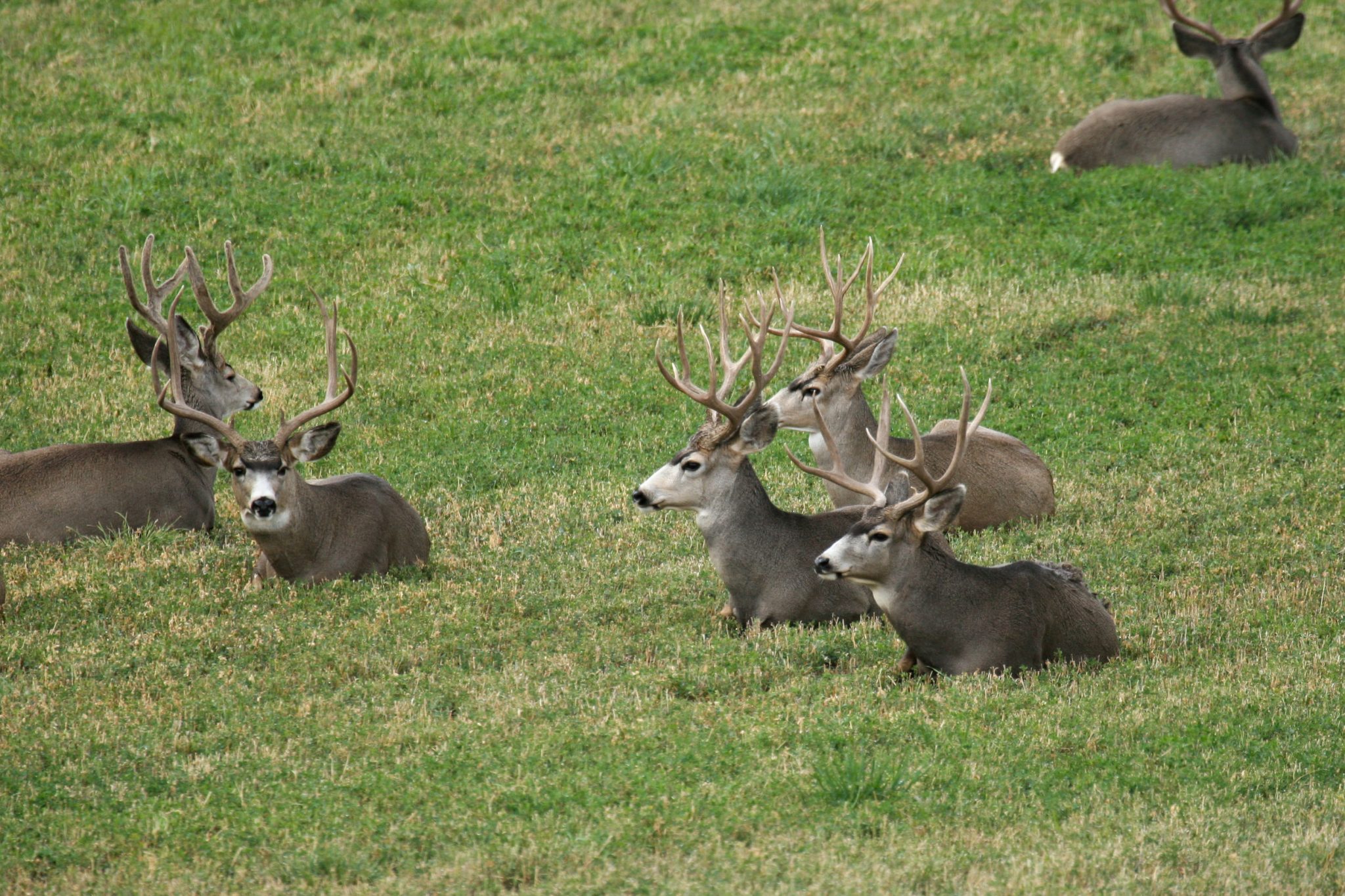 So what is a buck pasture?  I first heard that term nearly 30 years ago.  It was tossed around by deer hunters and sheep herders to describe places that attracted the most bucks in a given area on a yearly basis.

It didn’t mean much to me as it seemed pretty basic—of course most bucks return to the same place each year, that was well known even decades ago.  However, as I hunted (and especially scouted) more,  I began to understand the uniqueness of a true “buck pasture.”

What is a Buck Pasture?

As I’ve never heard a true definition, let me throw out the Robby-Denning version that I use:

Buck Pasture: A place where the most mule deer bucks in the area gather annually, typically from early July into early September.  This place will hold more bucks than any of the surrounding country on any given day, and will typically be less than a square or half-square mile in size.

I’m open to a better description of buck pasture if someone has one, but until then, that’s what I think of when I say “buck pasture.”  Do keep in mind that you don’t always find the very best bucks of a unit in a particular buck pasture, but odds are very good some of the best bucks will be there.

The topic of a buck pasture is fresh on my mind due to two events that just happened this week.  For the first, I was talking with a good friend who drew a tag that takes about seven-plus years to draw (three years ago it took five).  He had a big scouting trip planned.  He’d never been to the area personally, but had done a lot of research and had mapped out a scouting trip on Google Earth.  Check.

But when he shared the route with me, I immediately noticed that it contained one of the best places I’ve found in that unit for observing a lot of bucks.  Problem was, his map also contained marginal areas that may or may not attract bucks every year, as they don’t meet the definition of buck pasture. He might waste precious scouting time if he doesn’t focus on that buck pasture.

I grabbed the phone and gave him a call.  After a few minutes, he’d adjusted his plans a bit to make sure that the bulk of his scouting trip focused on that buck pasture.

If I was a betting man, I’d throw down that he’ll see the most, and probably the best, bucks on that particular hillside.  I could be wrong, but I know that if spends all that effort to scout the area, and doesn’t give that buck pasture his best effort, he’s lowering his chance at finding a big deer.

Second, I was headed back to a place I haven’t scouted in four years.  Things can change a lot in four years but I knew of a buck pasture in the unit that always has bucks in it.  Just as the sun hit the slopes of the buck pasture, I was two miles back with the 15x Swaro’s pinned on those hillsides.  Not even a few minutes in, I had two bucks spotted. One was mature.  The next morning, I set up a lot closer, and this time it was seven bucks out on the hillside, with one shooter and one just approaching that class.

Over a half-dozen scouting trips over 14 years, I’ve never failed to turn up bucks on that hillside, and is why I call it a buck pasture. Yet in the surrounding country where I’ve seen other bucks, sightings are very sporadic and can hardly be predictable compared to that buck pasture.

Again, you don’t always find the best bucks in the buck pasture, but odds are good you will.

The Problem with Buck Pastures

Because they attract a lot of bucks and bucks attract hunters, it’s hard to have a good buck pasture to yourself.  However, let your heart not be troubled!  It’s been my experience that once the bucks strip their velvet, they begin to disperse from the buck pasture.  They’ll filter out into the surrounding country, but are usually within a few square miles, often closer (the exception could be in areas where water sources are prone to run dry, or if there is really high hunting pressure).

If you’re after the most mature buck of the pasture, and he’s not showing up, start hunting around the most secure country where an old buck can hide.  If he’s big, he’s at least four years old, so he’s got to have a place he’s been holing up over the years or he’d have never made it beyond a 3-point.

Think like a buck and go where it’s hard to hunt, as that’s your best shot at finding him.  That could mean remote, hard-to-reach-at-prime-time country, steep, thick, or even private land…but likely some combination of all-of-the-above.

Just do us all a favor if you find a buck pasture— don’t post it on the internet.  Even if it’s a draw unit, you’ve just ruined a place that likely could have grown bucks for decades. That’s just the world we live in now.

Just Tell Me Exactly Where! I’ll Handle the Rest.