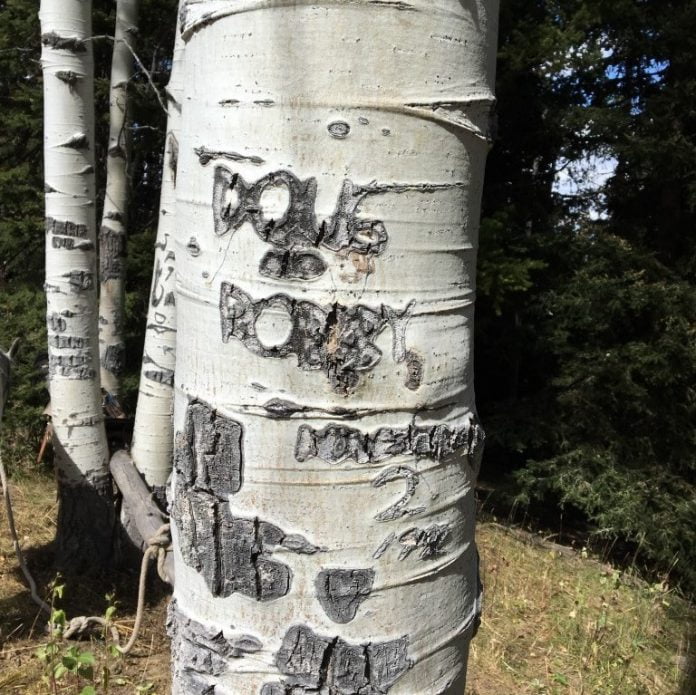 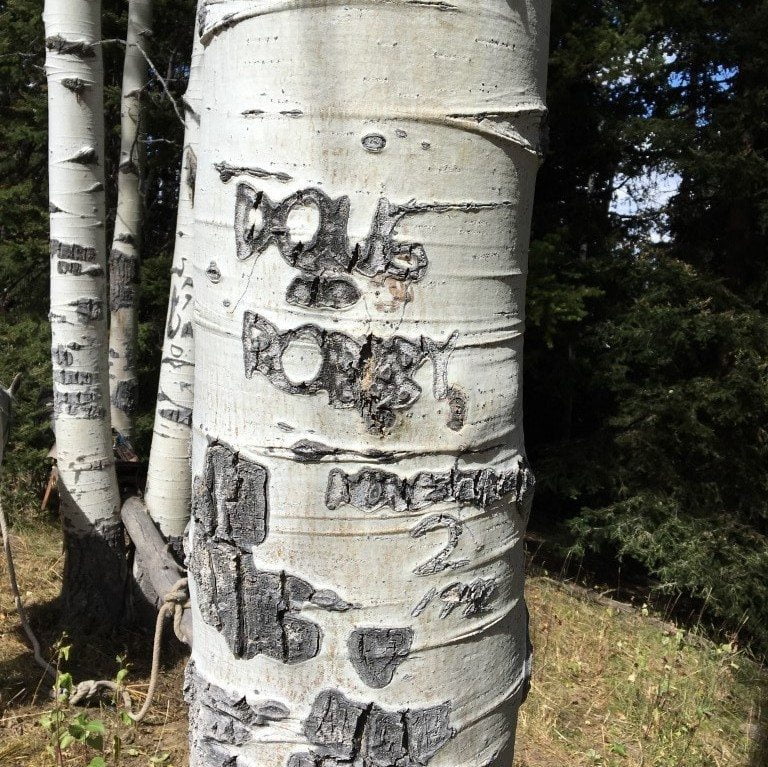 My plan was to head for the giant buck’s locale the next few days but when you’re job entails leading 25 employees, there’s always some drama.  Sure enough, I was delayed several days putting out fires back at work.

When I finally got off work on September 7th, it was late in the afternoon.  I headed for the giant buck.  Getting to camp requires about a five mile horseback ride on an old trail that isn’t listed on any map.  I hadn’t navigated that trail in the dark for 20 years, so when I arrived at the trialhead just as the sun was setting, I knew the adventure was on.  I packed the horses with several days food and some gear, slung my bow across my back, and mounted up.

Sure enough, instead of the normal two-hour ride, it took me nearly four hours to near the saddle where I my old camp should be. When my headlamp finally shone on a familiar tree, I knew I’d found it. There was a comfort being back to a place that Dad and I hunted together nearly 25 years ago. That tree, shown in the lead photo, says “Doug and Robby, November 2nd, 1992”  and marks the spot we’d camped all those years ago.  I still remember well carving those words.


The next few mornings and evenings, I still-hunted the area as I’d planned. The mountain was dry and crunchy making it very difficult to still-hunt.  I never saw the giant buck, but did see several other bucks in the area, and one really big track that may have been left by him.

I had to be back to work in a few days and left the mountain without laying eyes on him.

Back at home, I hunted a few places without turning over any big bucks, including the bucks I’d chased opening day in Part III

Over the next 10 days, the weather turned awful, dumping nearly 3″ of rain and snow on the drought-stricken Idaho mountains.  I knew this would give me ideal still-hunting conditions, so as the storm was departing, I headed for the mountain.

I hunted the area in several inches of snow.  It felt strange to be carrying bow in these conditions.  I hunted for several days and never saw the buck nor his track, but again saw several others that were pretty nice.

I pulled out and headed for another place where I’d seen some good bucks the previous year that was much more conducive to spot-and-stalk hunting.  With two deer tags, even if I killed a buck, I could still return to hunt the giant come rifle season.  I stalked several good bucks in the new area, but never got a good opportunity to kill one.

With that hunt, archery season closed; strike three for 2016.

By the end of September, I’d made three trips up the mountain the giant called home, riding and hiking around 35 miles during that time, but with only memories to show for it.  However, I had learned a lot and saw multiple mature bucks near the giant’s core area. I was hopeful with all that I’d learned that my chances were good of killing him once the rifle season opened in 10 short days…