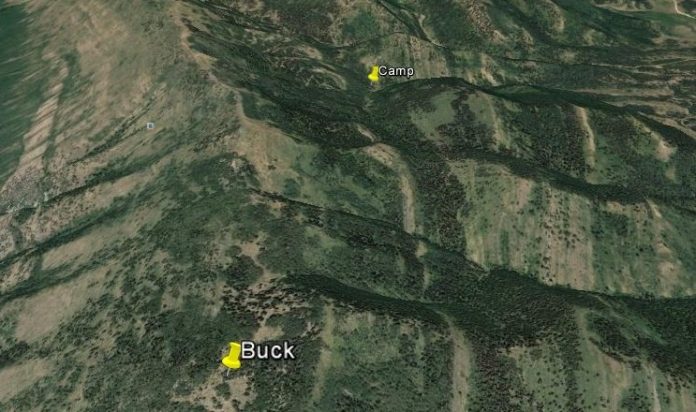 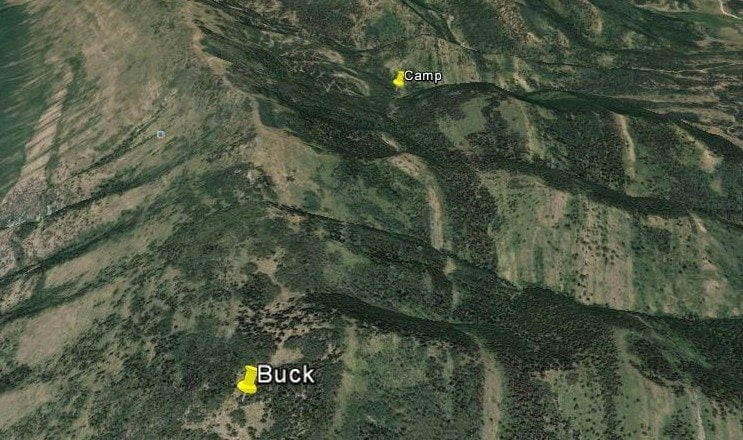 The OTC units in much of Idaho open October 10th.  I was up and gone before the sun on the morning of the ninth.

Some recent storms had dumped more snow up high but arriving at the trailhead, I could see the ridgelines 3,000 feet above had mostly melted off. I packed the horses with a few days worth of food and gear and headed up the muddy trail to my camp.

The photo in the lead slot of this post shows where I put my camp.  I was about a mile from the buck’s core area.  Winds typically move from SW to NE in this country.  This meant my camp was downwind of where I expected the buck to be.  You’d be smart to do the same when hunting big mule deer.   Unfortunately, not everyone else will be so careful.

Before dawn the next day, I shouldered my Christensen Arms Summit Ti in 270 WSM and headed up mountain. I spent about the first 20 minutes of legal shooting light glassing the classic open country most hunters spend their entire season hunting.  I didn’t expect to see the giant in the wide-open, but they do make mistakes.  I’d feel awful stupid if he got killed out there while I was 500-1,000 feet below in the cover.

By sunrise, I’d heard plenty of shooting and seen plenty of hunters, but no giant.  I sneaked down the main ridgeline and entered the cover where I hoped he’d be spending his days.  Now that I was packing a rifle, my confidence was much higher at killing him.  The temps were above freezing and most of the snow had melted, save a few patches here and there.  This made for quiet still-hunting and I crept within range of several elk and deer.

Here’s a quick wrap up of the first two days…

Just after that video was shot, on the evening of the opener, I crept back into the area where I’d seen all the buck sign.  About 20 minutes before dark, I caught movement in a small opening about 250 yards out.  It was a big-bodied buck and I could see antlers easily.  I slowly dropped to the ground and prepared for a shot.  If he moved even two steps forward, he’d be out of sight.  He turned out to be a different buck, about 26-27″ wide, and I let him walk.  The next morning, I was back in there as light filled the forest.  Here’s a wrap up of that very exciting evening and morning…

After begging my boss for an extra day, I hunted the evening without seeing any more bucks.  That night, the temps finally fell well below freezing and the moist ground seemed to turn to rock.  This made for very noisy still-hunting conditions and the next day was a bust. Strike four for 2016.

By the time I had camp packed and on the horses, the sun was low in the West. A big Pacific storm was brewing off the coast and how I wished I could be on the mountain when it made landfall.  I’ve killed some of my best bucks in big storms, but work was calling so I headed down the mountain.  The season was open until October 24th so I had one more chance to kill the giant.

Merry CHRISTmas to you all.