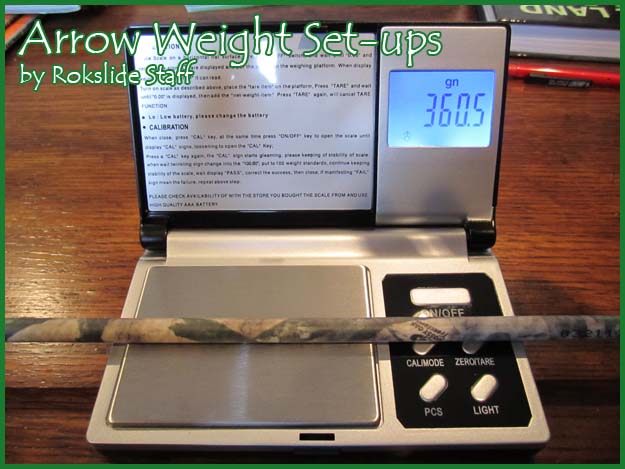 Arrow weight set-ups vary greatly from one bowhunter to another. There are so many factors involved that it is impossible to have one particular set-up work for everyone, or every situation. Several Rokslide members have taken the time to share with you what they have found that works well through much trial and error. Here are their set-ups:

My preferred arrow set up for western big game is an arrow weight of a total of 375 grains. I shoot the Gold tip Pro 5575 with Blazer vanes and topped with a Trophy Taker 100 grain Shuttle-T broadhead. This set up has worked great for me over the years.

My preferred arrow set up for western big game is an arrow weight of a total of 365 grains. I shoot the Gold tip Pro 5575 with Blazer vanes and topped with a Trophy Taker 100 grain Shuttle-T broadhead.

I shoot a Mathews Z7 Extreme at 55 lbs with a 28 inch draw for all western game. My secret weapon is my equalizer release that allows me to gain three inches on my draw length thereby increasing my overall speed and kinetic energy. My arrow of choice is a Victory Armor Piercing arrow with a 100 grain shuttle T-Lock broadhead. I use a Blackgold Surge sight with seven pins ranging out to 90 yards. With this set up my bow will shoot 261 fps and I am able to achieve 61 ft lbs of kinetic energy.

Arrow weight is one of the most underrated and overlooked aspects in western big game hunting. The amount of kinetic energy your bow produces is key in every situation you’re faced with in the mountains.

In most cases a well-placed arrow of any weight will get the job done, but when things go wrong and your arrow misses it’s mark by a few inches, that’s when arrow weight shows it’s true importance. So for this reason, I always shoot the heaviest arrow I can and still achieve a speed of 280 fps.

With my current bow and arrow set up, I am able to produce of speed of 286 FPS with an arrow weight of 488 grains. If you use the calculation for kinetic energy (Arrow weight x Velocity squared, divided by 450240), this combination gives me 89 foot-pounds of kinetic energy, a lethal combination for any North American animal.

I’m currently shooting a 2003 Martin Phantom II, set at 60 pounds with 65% let off. It’s light and short (under 37”) and forgiving. It sports a Ripstop drop-away rest and a five-arrow Alpine Archery quiver. It’s sighted with a High Country Archery standard pin sight. I set the pins at 20, 40, 60, and 80 yards (the 80 yard pin is only for practice—practice far, hunt close). Arrows are 375 grain, 27” Easton N-FUSED carbon 400 (8.6gpi). Broadheads are fixed blade Nap Nitron 100 grains with 1 1/16” cutting diameter. Release is a Scott string loop. I only hunt mule deer, so I can get away with less poundage and lighter arrows.

Prior to this past hunting season, my draw weight was set at 70 lbs and I was shooting Carbon Express Aramids, that when fully equipped, tipped the scale at 420 grains and had an FOC of 11%. Since then, I made the decision to really lighten up my arrow setup considering I primarily only hunt mule deer. After much experimenting, I lowered my draw weight to 65# and switched to the Carbon Express Maxima Hunter 250 shaft. Honestly, I have never shot it through a chronograph, but I can tell you this, it is fast enough! Here is the setup I finally decided on:

Vanes: Three 2” Bohning Blazers vanes (6 gr ea.) set at 3 degree helical (previously I had them on a 2 degree offset)

My arrow setup has changed drastically recently as I have been doing some experimenting. I had been tinkering with my archery tackle to come up with a good hunting arrow setup that was considerably heavier than what I had been using, but I just didn’t like what was happening to my trajectory and pin gaps. So I made the jump from 70# limbs to 80# towards the end of last season; the jump was harder to make than I had anticipated. It took some getting used to, but the benefits have been huge for me; I now shoot a 470 grain arrow slightly faster and flatter than I did with my old 70# setup with a 400 grain arrow. That’s nearly an 18% heavier arrow than my old setup and traveling at 292 fps, compared to 287 fps with the old setup. My new 470 grain setup consists of a 100 grain head, a 28” Easton 340 FMJ and a Bohning Wrap and Blazer vanes. Not only is this setup going to give me an edge with penetration, it’s also going to be less affected by a crosswind because it’s heavier. I’m not recommending that everyone go out and get 80# limbs; I’m just stating what I’m currently using, and what led to the change. I’m still searching for the perfect broadhead to screw onto the end of my arrow, but if I had to pick at this very moment, I would go with the Montec CS by G5 for a fixed blade and the new Edge by Trophy Taker for a mechanical. The one thing that I’m toying with now is stepping up to a 125 head to get more FOC, but that would put me at nearly 500 grains and I need to do some more experimenting on what my trajectory and speed would be if I choose to go that far with weight. My obsession with arrow weight has stemmed from a lack of pass-through shots when I felt my arrow should have. I always want two holes in the animals I shoot for better blood trails, and arrow weight is a good way to achieve it.

The Mysteries of 3rd Axis in Archery

Setting Up Your Bow, DIY Style