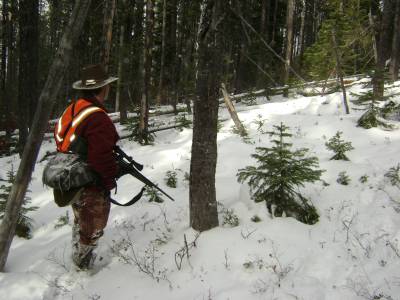 As you saw in Day 10, still-hunting can produce results if you know what cover the deer are using.  I talk to many hunters who abhor still-hunting and would rather just glass.  While glassing will likely be your first choice in semi-open terrain, if you don’t learn to still-hunt, you’re ignoring an important and effective technique for killing big deer.  Like yesterday’s hunt, I choose still-hunting under the following conditions:

1) Fog.  Nothing hampers a spot-n-stalk hunt like fog.  You can’t afford to lose too many hunting days waiting for the fog to lift.  If you think you’re going to be fogged in for more than a few hours and have an idea where the deer are, try still-hunting.  Just get the wind in your favor and don’t be in a hurry. Moving 100 yards or less an hour is plenty fast and once you get into fresh deer sign, slower is better.

2) Thick areas.  As you’ve seen, most good bucks stick to the cover even during the rut with little hunting pressure.  Binoculars and spotting scopes are a good way to figure out where the bucks might be, but to kill one, you often have to get in their living room.

If a hunter can get over any bias against still-hunting, he’ll likely find this to be a very enjoyable pursuit.  I rank still-hunting only behind tracking in levels of excitement.  I put glassing down as the most boring of techniques.  You won’t feel more alive than when pussyfooting through the cover with big tracks underfoot and glimpses of deer ahead.  If you get lucky enough to kill a great buck that way, you will be satisfied beyond imagination- few hunters these days are capable of the feat.  I’ve killed at least five of my best bucks at close range in the cover.  I wouldn’t trade those kills for any 400-yard shot.

Thanks for all the great feedback, questions, and comments during this series.  It’s like having a camp full of guys to come back to every night.

Now let’s take this hunt down to the last day and see what happens!

Application Strategy: Where Should I Apply?