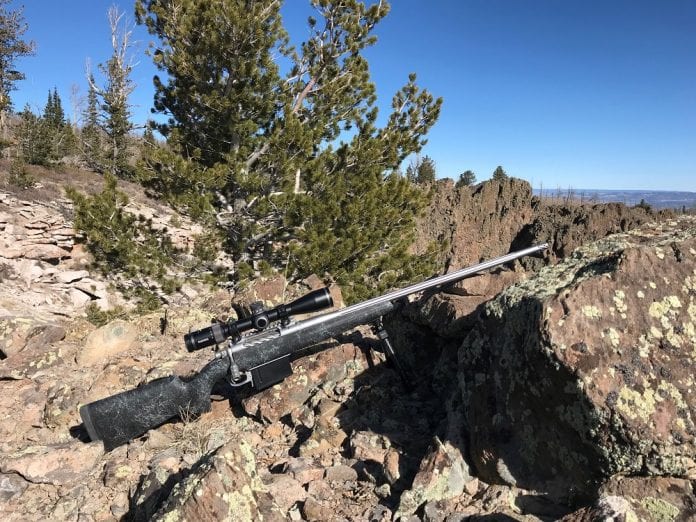 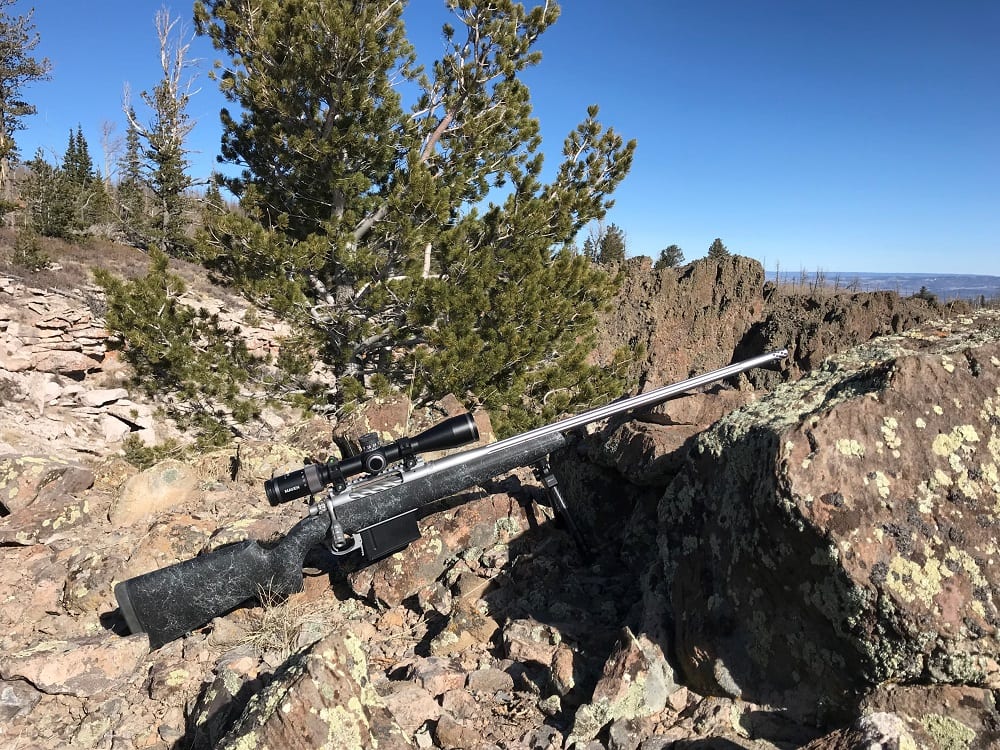 Over the last several years, the number of rifle hunts I participate in has steadily increased to the point where I’ve started looking for the “perfect” rifle for the terrain and conditions I hunt. I’m fortunate enough to own a general-purpose rifle, a feathery mountain rifle, and a short-barreled big bore brush gun.   But after drawing a premium Utah elk tag this spring, a dedicated long-range rifle became an essential addition to my collection. Cooper Firearms had just what I was looking for. (Visit their site here)

As the pace of technological advancement in firearms, optics, and backcountry hunting gear quickens, so does the specialization. There are now hunting rifles to fill every conceivable niche in the world of hunting, from ultra-light sheep rifles to short barreled heavy-weight brush guns to 14-pound long-range rigs.  They are all designed for a narrow range of use or type of hunt. The kind of rifle I wanted to take to Utah was a rifle capable of extreme accuracy, a well-designed stock that is optimized for consistent shooting form, and moderate in weight for taming external input.

I looked through the many models on the Cooper Firearms webpage and decided the new-for-2018 Model 52 Open Country LR rifle would be a perfect fit. This rifle configuration was named by the members of Rokslide (read more here) and is very specialized in its intended use of shooting longer distances. 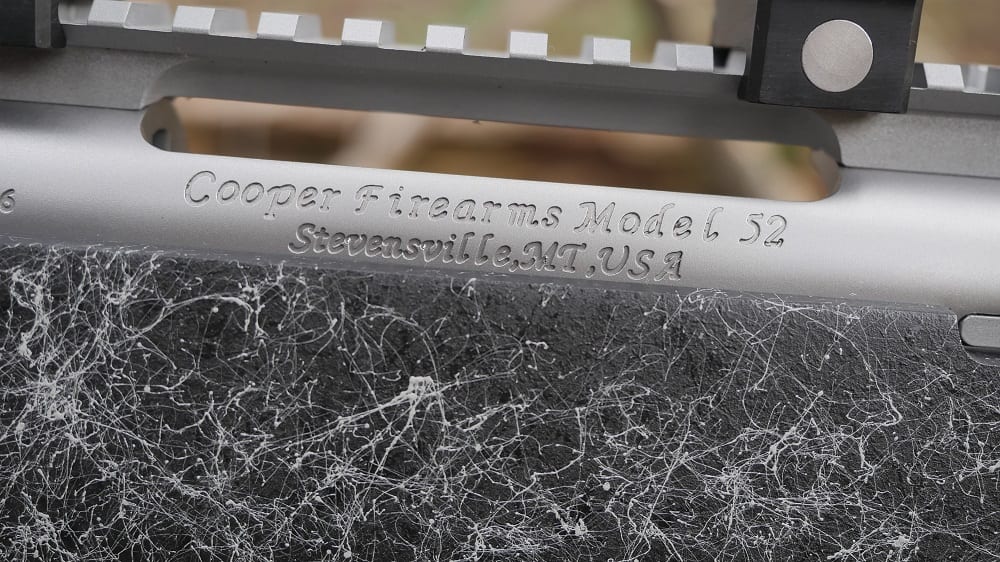 Over the course of the spring, summer and early fall, I shot many different loads through the rifle while trying to find an optimal combination of remarkable accuracy, tight velocity variance, and downrange energy. The preferred load was shot to 800 yards to validate velocities and ballistic coefficients as well as to test the tacking of the Maven RS.1 scope. (link to review here) I packed the rifle into the mountains of western Montana during the spring and fall bear seasons to familiarize myself with its handling characteristics and features in the field.

The 2018 Cooper Open Country LR rifle is built around the Model 52 action with a short lift spiral-fluted three-lug bolt. The straight fluted stainless-steel barrel is 26 inches and has a radial-ported muzzle brake that is 1.5 inches long. The barrel contour is close to a Douglas #6 that finishes at .750 inches at the muzzle end.  The bottom metal fits an AICS style magazine that holds five rounds single stacked. The Trigger Tech trigger is fully adjustable, breaks crisp, and is one of the best triggers on the market.

The action is topped with a 10 MOA picatinny rail that is matched in its finish. Everything is bedded in a Cooper-built synthetic stock that has a forearm width that slightly thicker than a sporter stock, a vertical pistol grip with a palm-swell, and a medium-high straight comb. The shape and specs are very close to a McMillan Game scout. There are two sling studs mounted on a forearm and one at the rear. Without a scope or rings the rifle weighs 8.9 pounds and fully loaded with the Maven R.S.1 scope (link to review here) and Hawkins rings mounted it comes in at 10.8 pounds. 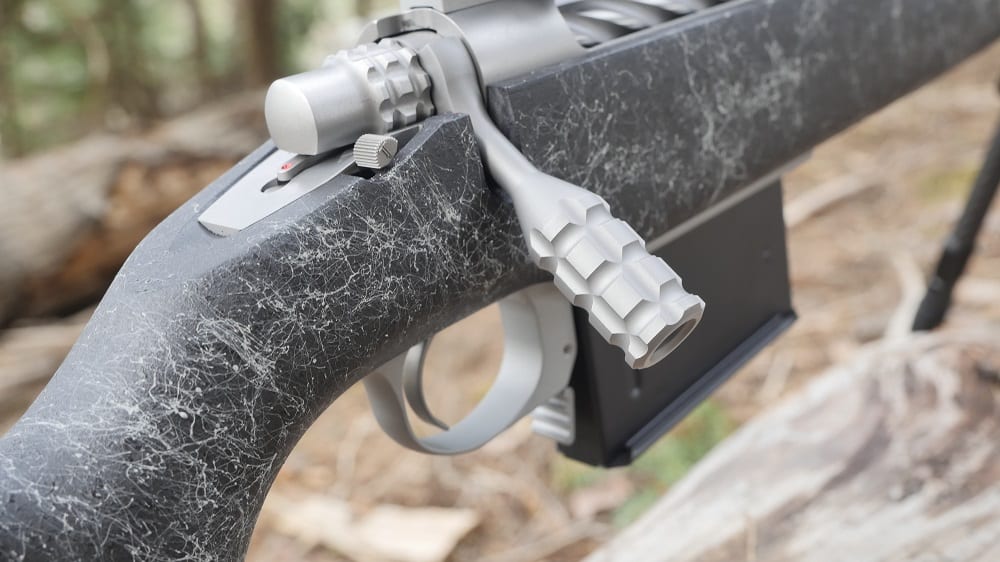 The stock on this rifle is perfect for long-range shooting off a bipod, bench, or backpack, yet is easily shouldered for quick off-hand shots if needed. The forearm isn’t overly bulky to grip but is wide and flat enough to settle solidly onto a shooting bag for a steady hold. The raised comb is shaped perfectly for a solid cheek weld and consistent form in the prone or sitting positions.

The three-lug bolt has a very short and light lift allowing for ample scope clearance even with low rings and fat-fingered gloves. The bolt cycle is buttery smooth as is the feeding of the long 300 RUM cartridges. The tactical style bolt knob looked a bit overkill at first glance, but I grew to like the positive grip it delivers with its over-sized knurled design. 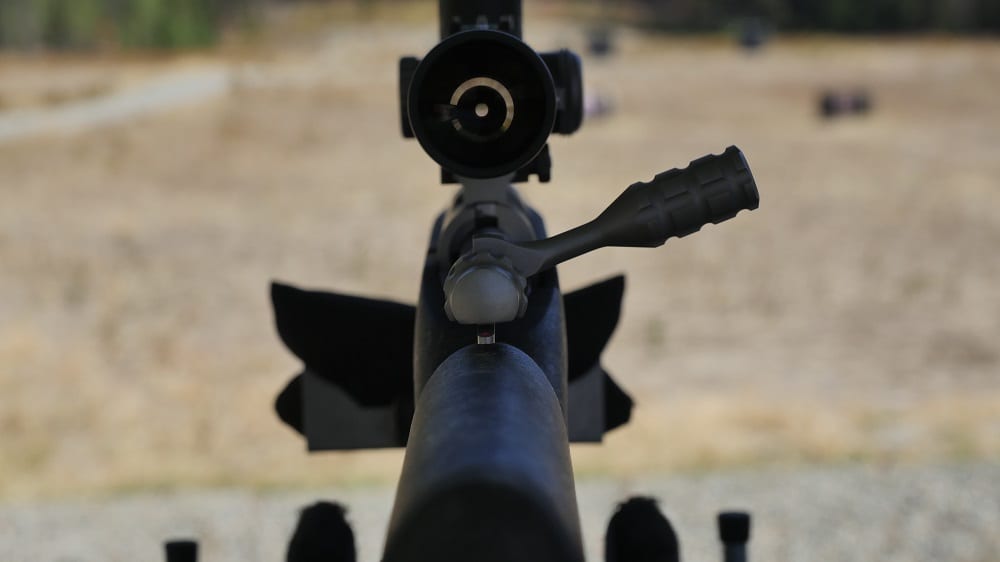 The trigger is fully adjustable and is set to break at a crisp three pounds from the factory. It never fouled in the wind-blown dust of southern Utah nor did it freeze when exposed to the dampness of western Montana in late November.

The top of my dislike list is the five-round single-stack AICS magazine system. The logical hunting scenario where needing to fire five rounds rapidly would be a predator or pig hunt where the goal is to shoot several animals in rapid succession.  But, for big game hunting, I have found three rounds in the magazine is plenty and it’s extremely rare when more than two are needed. I like to hand carry my rifle most of the time by gripping it under the action.  But the magazine protrudes out the bottom of the rifle almost 2.5 inches, making it cumbersome and unbalanced. The protruding magazine also snags on clothing and pack straps and rattles when inadvertently bumped or handled quickly. Lastly, the release mechanism is located outside the trigger guard and it is possible to accidentally release the magazine.  Fortunately, the rifle can be ordered with a 3-round magazine that sits flush with the stock and would be my preference.

A milder dislike is the radial brake that comes on the rifle. Although it’s extremely effective at reducing recoil, it’s also equally effective at displacing dust and snow when fired in the prone position. A side-ported brake can be as effective at recoil reduction without the dust blast and would be a better option for a rifle designed for long range shooting and hunting where prone shooting is common. 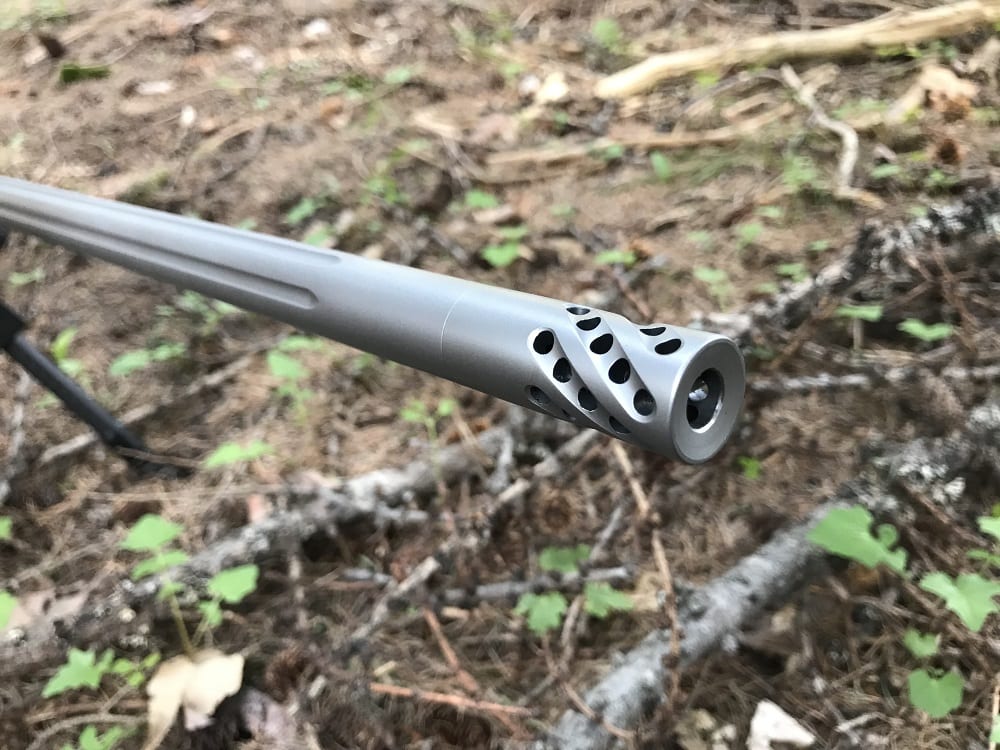 The rifle I have is chambered in a 300 Remington Ultra Mag with a 1:10 twist. I decided to develop a handload to optimize accuracy and velocity of the 220 grain Hornady ELD-X bullet with the goal to have a load shooting at 0.5 MOA and a velocity over 2900 feet per second. I bought a box of factory cartridges loaded with the 220’s for the initial barrel break-in and getting the reticle on the paper. The preliminary shots confirmed the inherent accuracy of the rifle. The first groups printed in a cluster about 0.6 inches center-to-center. 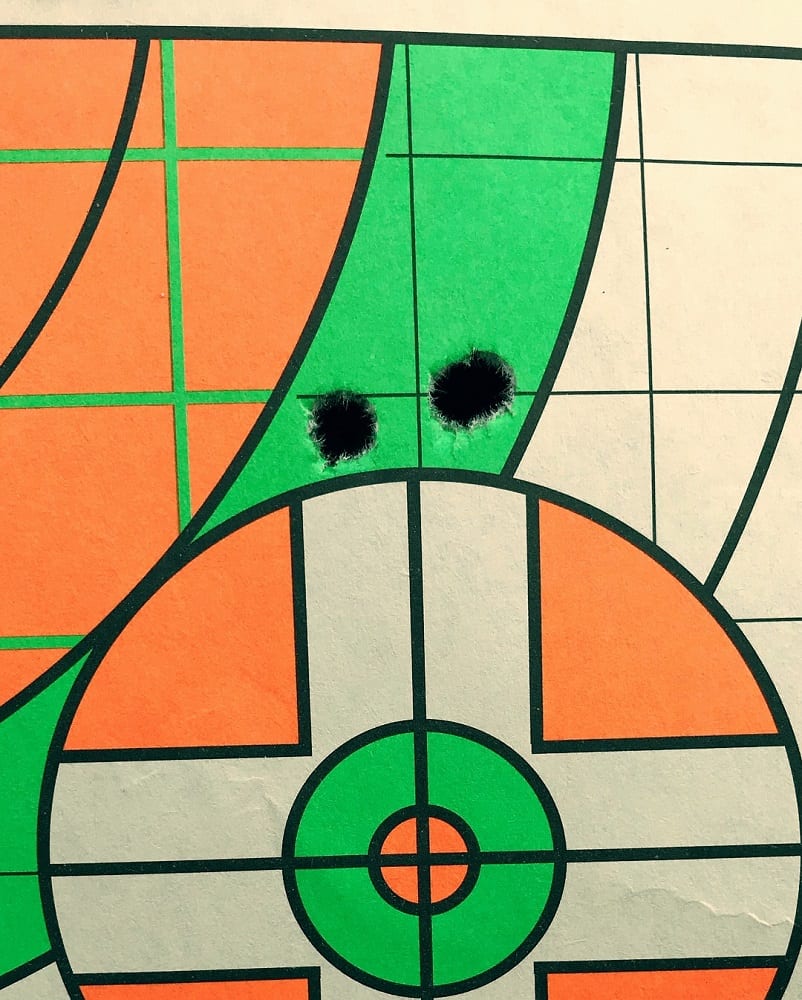 Eventually, I worked up some loads using Bertram brass stuffed with some H-1000 and had a solid group right at 0.5 inches. The velocity was right at 2950 fps without showing any signs of pressure and a low deviation in velocities. When I developed a load for this rifle, I did not calculate the distance of the bullet off the lands. But once I started playing with bullet seating depth, the rounds were loaded at max length for the magazine (3.635 inches) and worked shorter until I found a length that shot well. The length I settled on was 3.615 inches. SAAMI length for a 300 RUM is 3.600 inches. Loading to SAAMI length isn’t necessarily a bad thing in this case but in order to optimize accuracy, having the ability to seat bullets longer could wring a little more out of a rifle. This is one of the downsides with the AICS magazine setup.

After settling on a load, I headed to set up targets at 600 and 800 yards to validate velocities and to assess groups at a longer distance. At 800 yards the vertical variation in shots was within a few inches and grouped under 6 inches while the 600-yard groups were half that.  Most of the test loads I worked up shot exceptionally well which can be attributed to the quality craftsmanship of Cooper Firearms.

On the Utah elk hunt, the rifle performed great. The terrain was extremely open by my standards so there was very little brush or heavy timber to grab the long barrel or scope. The setup I used to shoot my elk had the rifle rested on a bipod in the front and a pack under the butt.  There was a gusty cross-wind and the weight of the rifle damped the effects of the gusts and my nerves. The shot was at 440 yards and the bull was dead at the impact of the bullet which penetrated the base of the neck and stopped under the hide in front of the opposite shoulder. The preseason practice and testing of the rifle made the shot natural and effortless which is what I strive for in all things hunting.

The Cooper Open Country LR is priced at $2795. As mentioned, it can be ordered with 3-round magazine that sits flush with the stock, avoiding any of the issues that I previously mentioned.  It can also be ordered with a Proof Research Sendero Light carbon barrel and a Backcountry bolt handle which cuts about two pounds from the rifle. These options add $1000 to the price tag. This lightweight version, bedded in the same stock, with the same silky-smooth action, and quality craftsmanship could be the ultimate do-it-all rifle. However, the standard model Open Country LR fills the long-range niche with great performance and quality craftsmanship. 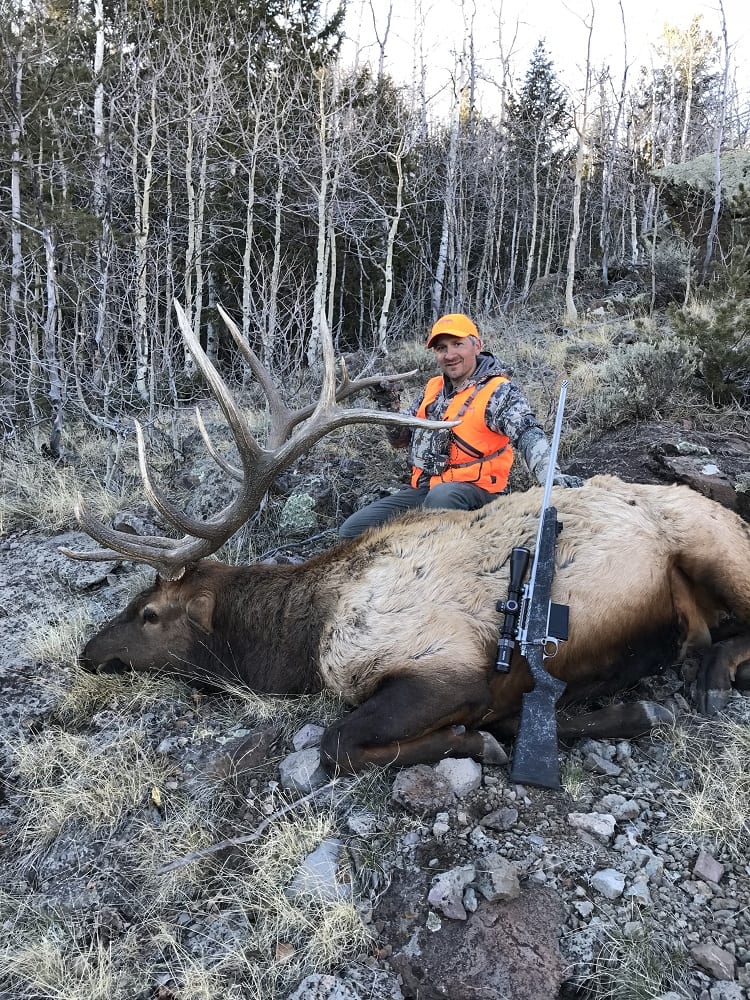