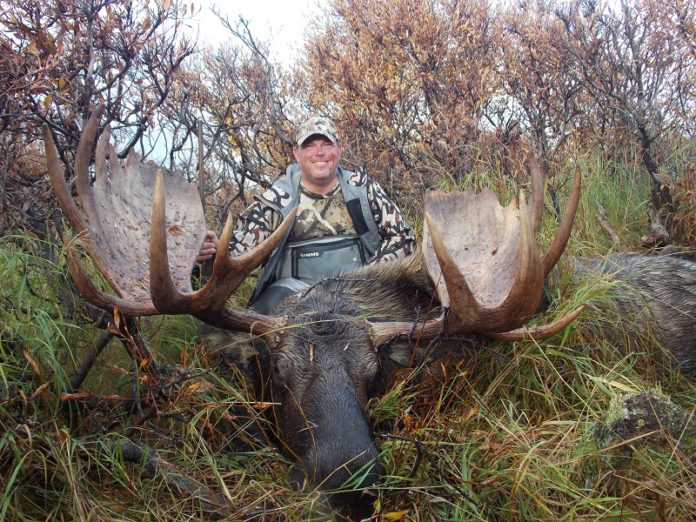 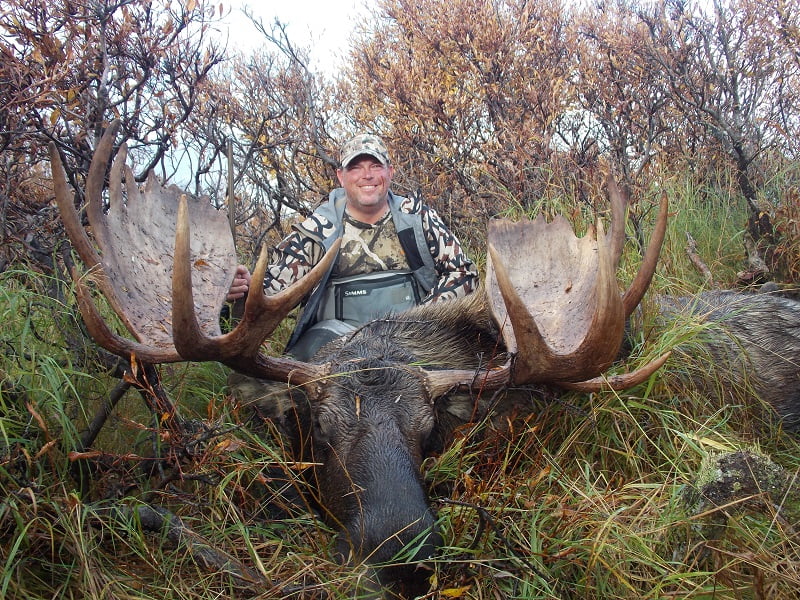 I never felt the loneliness that many describe as I watched the floatplane fade into the distance.  Maybe setting up the tipi ahead of the looming rain clouds held my attention.  My primary emotion was definitely excitement–I was finally in Alaska on my first moose hunt.

How It All Started

My friend Dean and I had dreamed of this hunt for years.  We grew up a mile apart and started hunting and fishing together as soon as our parents trusted us enough to let us venture that far.  As we grew older and more experienced we sought new challenges and began hunting western game as well.  When Dean was approaching 40, we decided it was time to start hunting Alaska and the moose hunt entered the planning phase.

After researching our options, calling the outfitter, and emailing past clients we booked with Papa Bear Outfitters in 2015 for a 2018 hunt.

Once the hunt was booked it was time to tackle the rest of the logistics.  Decisions needed to be made on gear, travel, hunting strategy, meat care, and shipping.  We had a lot to learn. Rokslide proved invaluable as experienced hunters were willing to answer my questions.  I learned what we would need for gear and how to call moose.  Dean researched the best way to get ourselves, our equipment, and hopefully our meat and antlers to and from Alaska.

Finally, The Hunt Was Approaching

We spent the months before the hunt making sure our rifles were dialed, our gear met the weight limits, and that we were physically ready for the processing and packing of moose.  We made trips up and down the hills near home with heavy packs and did “pond laps” in our waders.  Slogging through the pond mud helped prepare our muscles and joints for the strain of un-sticking our feet in the swamps.  Talking to past hunters, we knew that travel in the swamp would be difficult, especially with a moose quarter strapped to our packs. 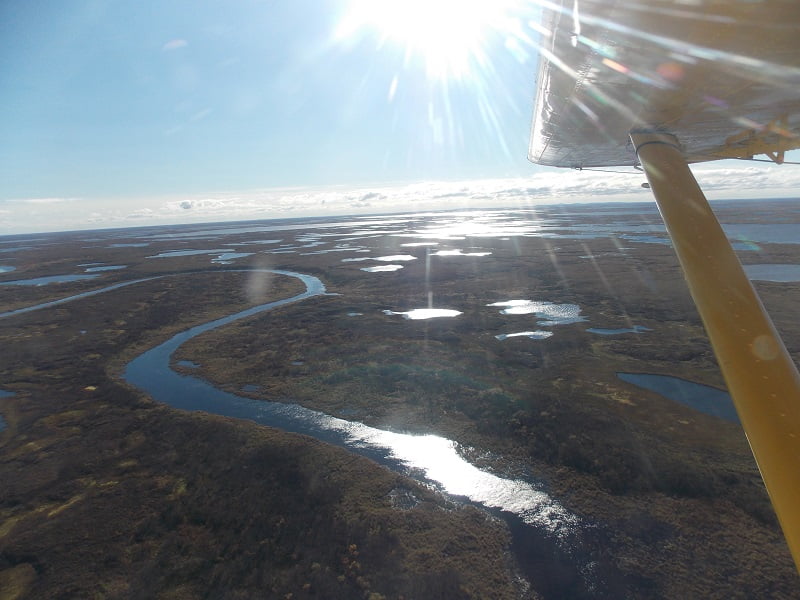 The trip to Alaska went smoothly and soon we were on the floatplane headed into the field.  Once we finally arrived at our hunting location we quickly got our tipi set up and then worked on the rest of camp.  Our location was very flat and swampy.  A shallow slough ran a mile and a half in front of camp. A small river meandered through the grassy meadow a half mile past that.  There were strips of wrist-thick brush breaking up the meadow reaching over 12-feet tall.  As darkness approached the first evening, we did our first series of moose calls.  We saw a couple cows feed out into the slough in front of our camp near dark. 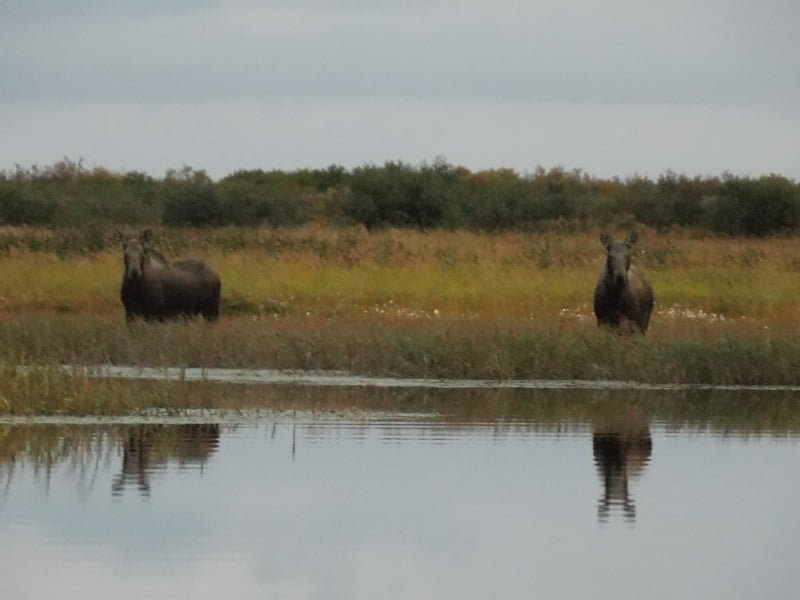 The dark clouds arrived overnight and rain stuck around for the majority of the next five days.  We hunted near camp when rain or fog limited visibility and the wind reduced the range of our calls.  During periods of lighter wind and rain, we ventured further.  I didn’t want to spread our scent everywhere during poor hunting conditions early in our hunt.  We only saw one bull during the first three days.  He was too far away to hear our calls but we saw his paddles flash occasionally in the brush.

Late in the evening on day four,  a small bull came out of the brush 1400 yards from camp and headed straight to our cow calls.  He postured for us and tipped his head back and forth when Dean began raking brush.  We got him to the edge of the slough across from camp at dark.  He was not a bull we wanted to take but it was a great confidence boost to see his response to our calling.

Day five and most of day six, we experienced strong wind and heavy rain.  Finally late afternoon on day six, the sun came out.  It was a perfect evening, light wind and cool crisp air with the fresh scent that follows the rain. 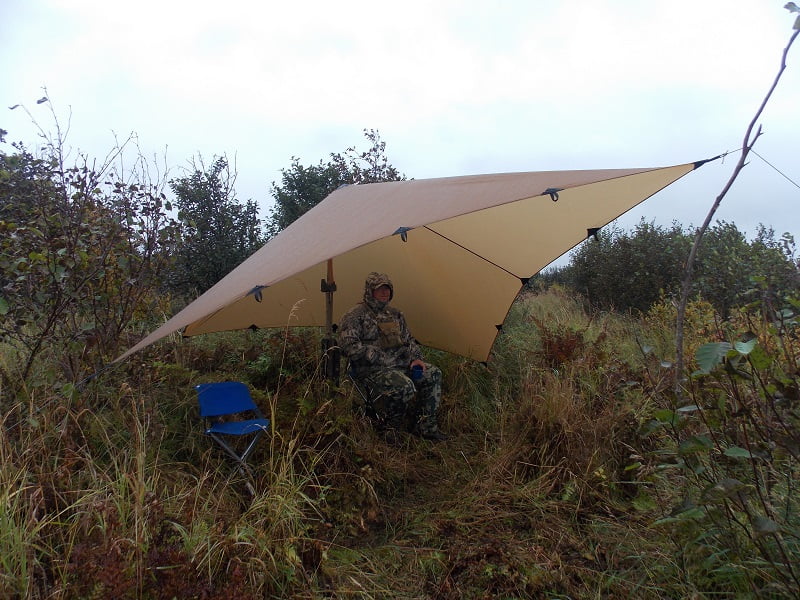 Dean and I split up to hunt that night and as I walked to my calling location, I saw a red fox out enjoying the sun.  It was the first animal other than moose we had seen since being dropped.  I set up next to a small tree with an oxbow of the river in front of me, giving me a view into an area the wind was finally right to hunt.  After giving the area 20 minutes to settle I made my first cow call.  I heard a soft cow call from the river a few minutes later.  The rain came back for a little while so I just sat tight and waited.  Once it stopped I raked the tree next to me with my Bull Magnet call and did a couple soft bull grunts.  A bull began raking in the distance shortly after and my excitement increased.

A half-hour later I heard the unmistakable racket of a bull destroying a tree off to my right.  I slipped around my little tree for a look and there he was.  I will never forget the image of him thrashing the brush with his antlers.  One look through my range-finding binoculars showed he was a shooter bull, and 300 yards away.  Seconds later I was kneeling with my rifle rested over my optics tripod.  My crosshairs were doing a 10” circle behind his shoulder so I took a deep breath to calm my nerves.  The circle shrank to 3” and I sent the bullet on its way.  The bull gave no indication of a hit but turned straight away from me as I reloaded.  After standing there for what seemed like forever he turned broadside facing the opposite direction.  I sent the second bullet behind his other shoulder and when I came off recoil he was gone.  I felt good about both shots.

I started toward the bull’s last known location but then saw Dean across the slough.  I decided to pick him up with the raft before looking for the bull. Thirty minutes later we were standing by the bull’s last known location and split up to search for him.  Dean found him seconds later.   All the days of cold and wet were forgotten as we admired the magnificent animal.  The tape showed him to be 52” wide.  After some pictures the work began. 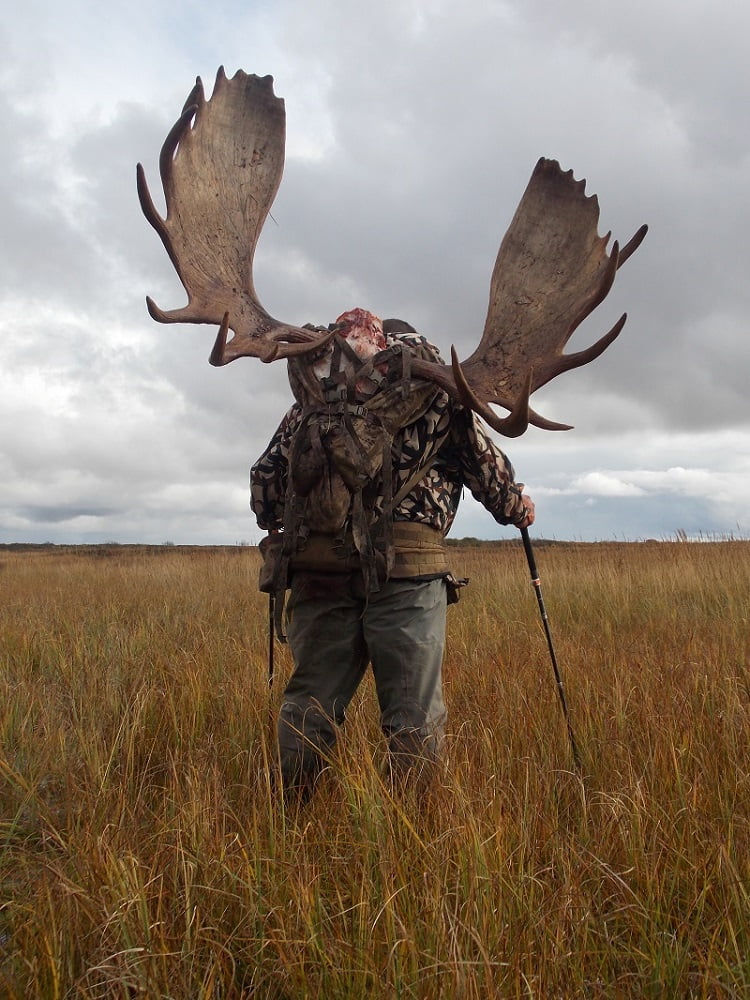 It took us about three-and-one-half hours to break the bull down, bag the meat, and prop everything up against brush for good airflow.  We packed our gear out that night and headed back to camp to prepare for the next day’s work. 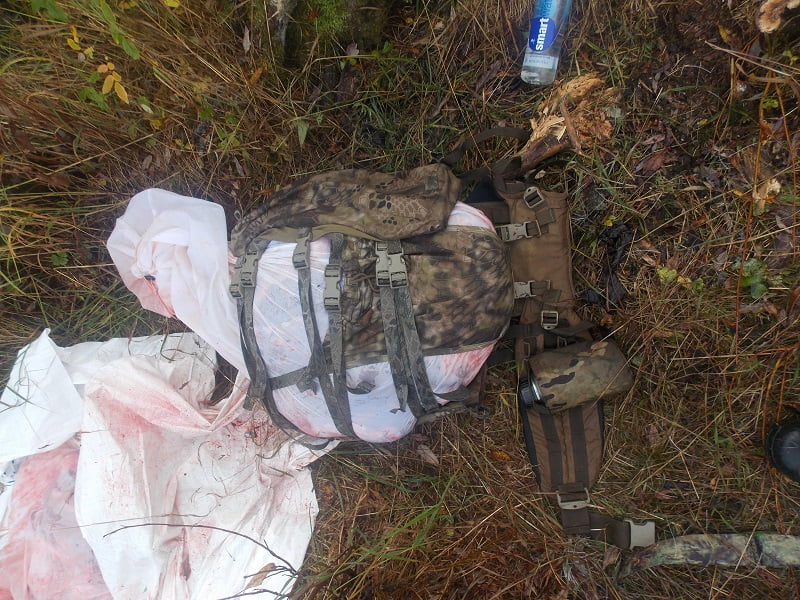 The following day’s pack out took eight backpack loads!  Each quarter was a load, the two rib slabs we carried as one load.  The trim meat and neck meat were carried together as were the loins and tenderloins.  The head made the final load.  That night we stayed close to camp and treated ourselves to a meal of Stovetop stuffing and moose tenderloin.  It sure hit the spot after days of freeze-dried meals. 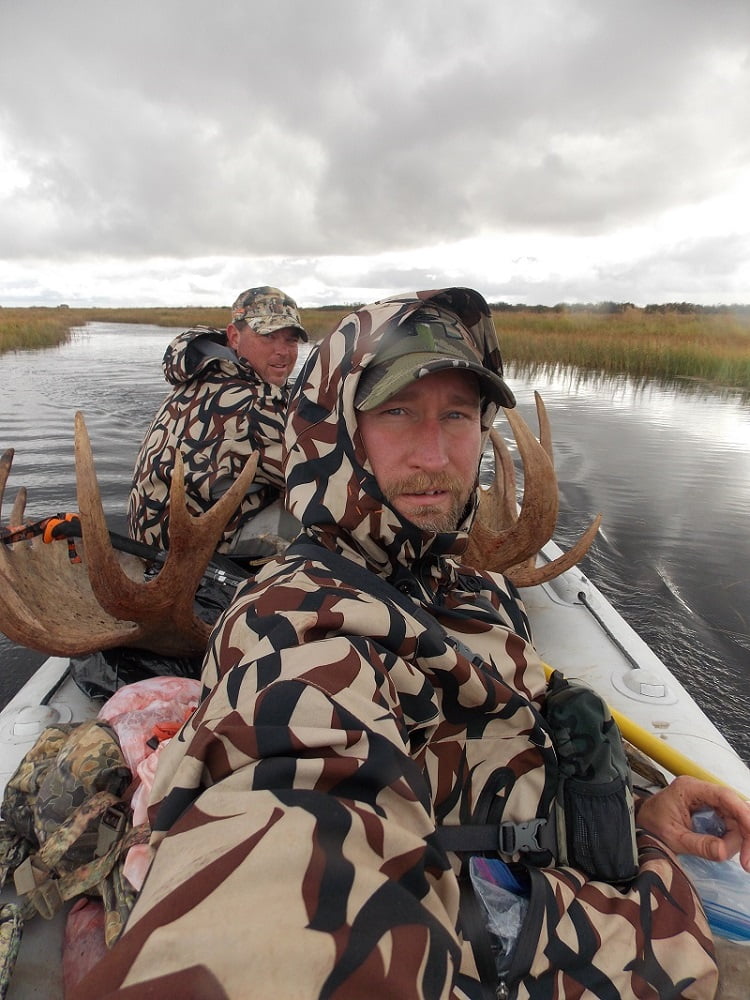 On day eight, I called in a bull about 35” wide that Dean chose to pass.  The temperature started to climb that afternoon and the sun came out to stay.  With the warm weather and a full moon, moose activity dropped dramatically.  We ranged out from camp as far as the terrain allowed over the next few days without any more moose sightings. 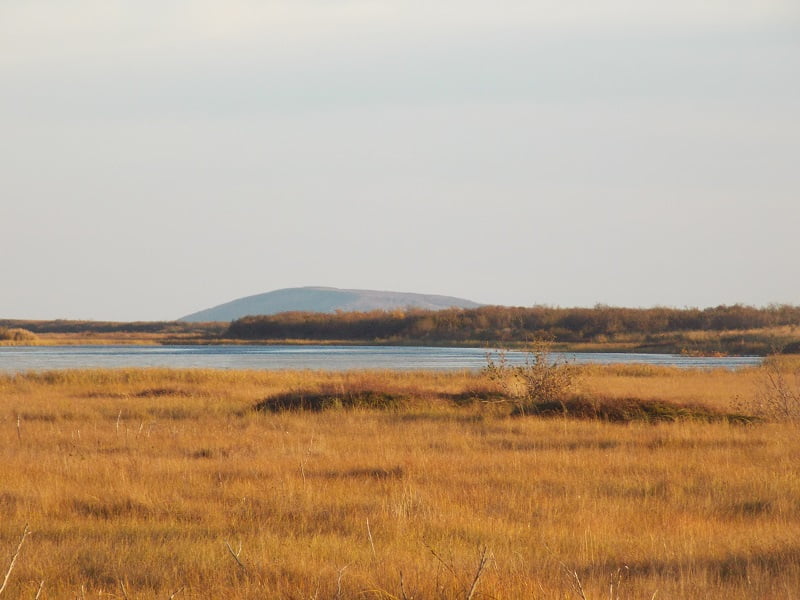 Day 10 we checked a few close meadows at daylight and then got in our raft to try further out.  We soon spotted a smaller bull with three cows at the lower end of the slough.  I got the raft to shore so Dean could bail out and pursue the bull.  Shortly after I heard a shot hit hard.  Dean had his bull!  He kept his cool and made a perfect 500-yard shot despite his firing pin seizing with rust from all the rain.  He had to unload the rifle and dry fire it repeatedly to get it working.  After another celebration and pictures the work began again. 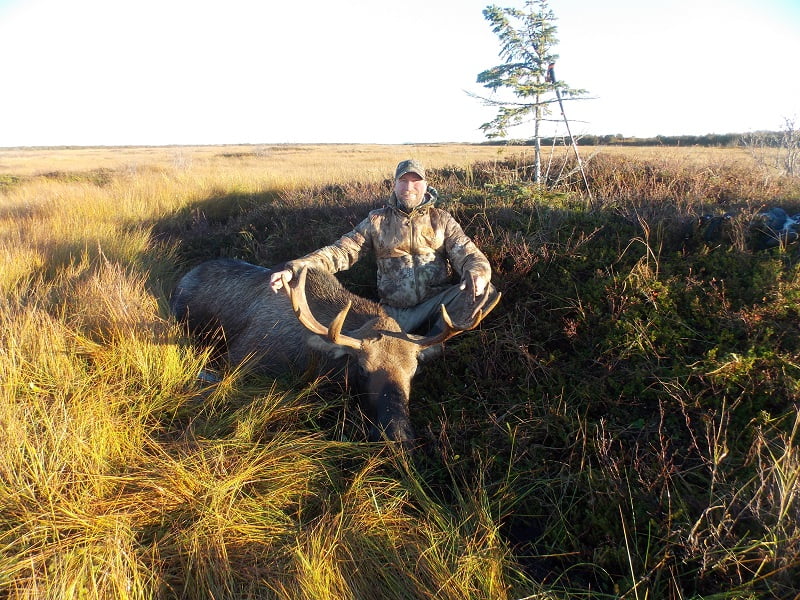 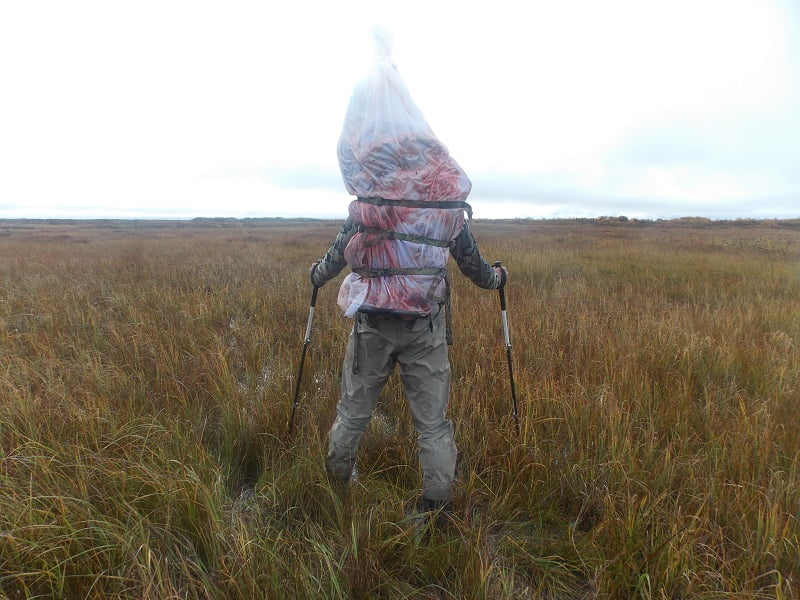 We flew out of the field on Day 11 and spent the next day at the lodge caring for our skulls, meat, and gear.  We donated some of our meat and froze the rest for the flight home.  We sure got some looks wheeling a cart loaded with moose skulls through the airport when we got home! 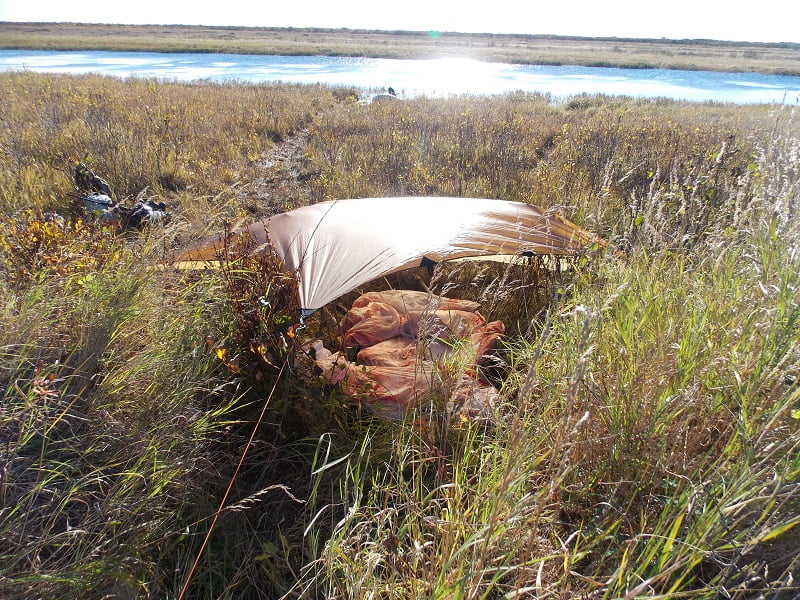 It wasn’t long before we were planning our next Alaskan adventure.  We have a caribou hunt booked for 2020 and will start planning a Kodiak Sitka Blacktail hunt after that.  Alaska is an incredible place! I can’t wait to visit again. 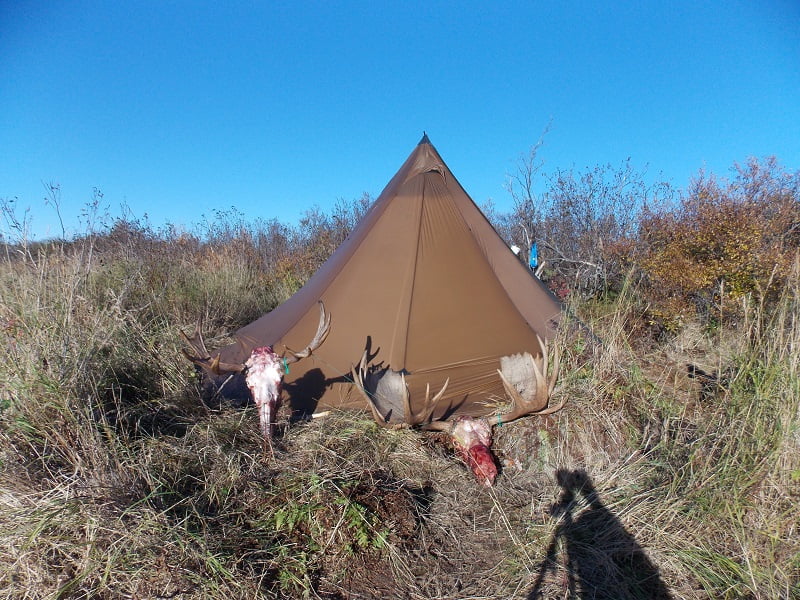 For more information on our gear and tactics check out the thread “Some Things I learned on my first moose hunt” here.  I’d be happy to answer any questions I can help with.