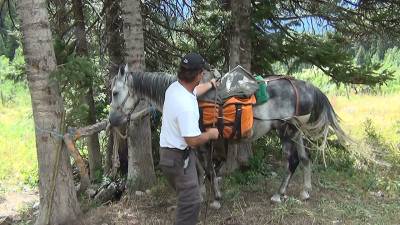 It’s been less than a week since I debated with a pretty good hunter on the subject of the best hitch for securing panniers to a packhorse.  It’s an age-old argument and ranks right up there with Ford vs. Chevy.  I’ve learned to just let people tell me what is the best, and then use my tried-and-true basket hitch anyway.

I first learned this hitch from a “real” cowboy by the name of Bill Kelly.  Bill was born and raised on a Wyoming ranch in the late 50’s and is still packing to this day. When a guy like that offers me advice, I listen.  I’ve used the basket hitch since the early 90’s and can’t see a day when I’ll quit it.  It’s particularly good for a guy less than six feet tall and who hunts alone a fair bit (that would be me on both accounts.)

Here is a 10-minute video on the basket hitch if you’d like to ever give it a try.

Got Harses? Training for Rope Under the Tail

Got Harses? Training for Steep Country