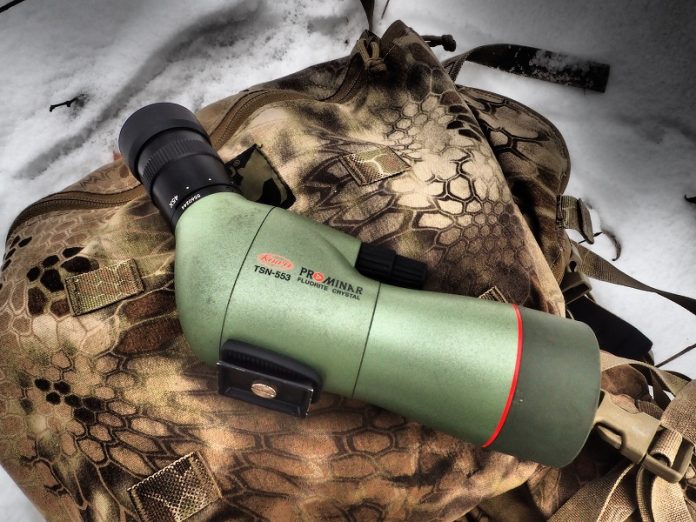 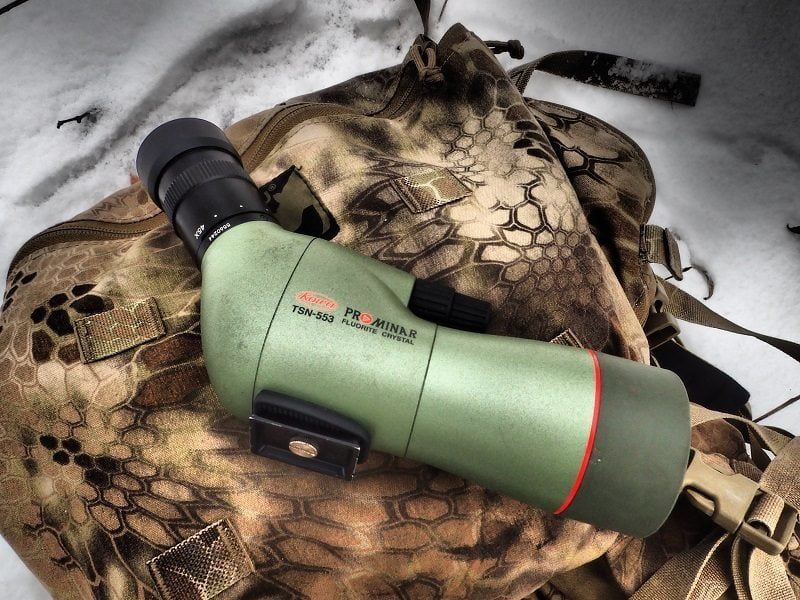 Late this summer I purchased the Kowa TSN-553 Prominar. Why did I purchase yet another 55mm, sub 2-pound spotting scope? I’ve been down this road before only to be disappointed with the results. I guess it may be because I am searching for the holy grail of optical clarity, weight, and size. Trying to find that magic combination that justifies leaving the bigger spotting scope at home and taking a much smaller spotter in its place.

At less than 29 ounces for the angled model, the Kowa TSN-553 sports a 55mm objective and a 15-45 power zoom range. The power range was a big factor in the decision to purchase this optic. Most other small 50-55mm objective spotting scope zoom ranges top out at less than 35X. I had previously found that spotting scopes in this genre didn’t really show me anything more than what I could discern through my 12X binoculars. I found the Kowa 55mm spotter to be far different in this regard. Even at 45X the clarity is excellent. 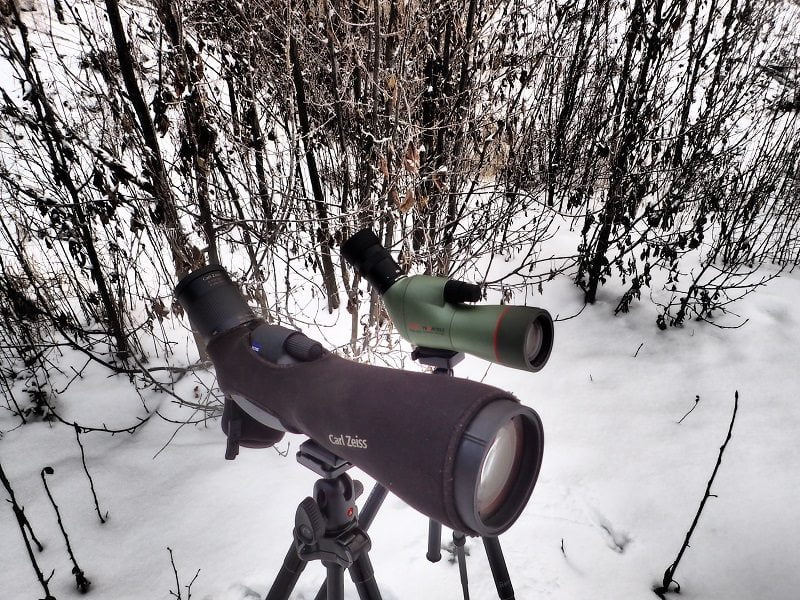 Initially I almost felt guilty doing a direct comparison between my big Zeiss 20-75X85mm Diascope and the little Kowa 15-45X55mm TSN-553. When the spotters were placed side by side the showdown looked like classic David vs. Goliath. However, in the end this is the question I had when purchasing this little spotting scope: Could the Kowa hang with my current spotter well enough to earn a place in my pack for all hunts that didn’t require the legality of the animal to be determined by the animal’s horn/antler configuration (sheep/moose hunts)? For the majority of my other hunts (like deer, caribou, bears, and mountain goats), determining legality via verifying full curl or counting brow tines simply isn’t needed and I often felt the big 85mm spotter was overkill especially given how much it weighed and how much space it took up in my pack.

During the course of this fall I set up both spotting scopes side by side at 45X looking at grizzly bears, moose, sheep, and caribou up to 1 to 4 miles away. I found very little difference in what the Zeiss and Kowa could discern, and that alone impressed me enough to feel that the little Kowa spotter will not only stay around, but be the one that finds its way into my pack for most backcountry hunts.

At roughly 1/3 the weight of the Zeiss, the Kowa saves me over 3 pounds of total pack weight. Also, being 6” shorter in length and smaller in every other dimension as well means it takes up considerably less pack space. Furthermore, the smaller size and weight means I can get by with a smaller/lighter tripod. This is because the weight of a sturdier tripod simply isn’t needed to support the much lighter Kowa, further saving weight and bulk in my pack. 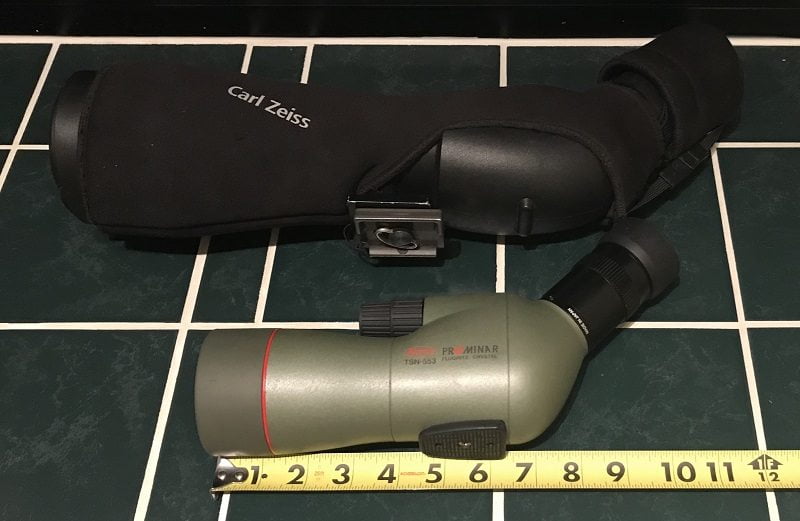 Now the Kowa isn’t without some compromises when comparing to a much larger, heavier, and expensive spotter such as the Zeiss. For starters, the Zeiss goes all the way up to 75X zoom. I’ve always been one to appreciate having as much power as I can so long as the clarity is there, and the conditions allow for it. That said, there are times when conditions simply don’t allow for use above 45X anyways and in these cases the extra zoom range of the larger optic is wasted.

Another aspect where the Kowa struggles I feel is with regard to field of view (FOV). Having such a large power range in such a small optic means this is to be somewhat expected. If you are one that scans and glasses with a spotting scope rather than your binoculars I feel this rather narrow FOV could become bothersome. For myself, I nearly always scan with my 12X binoculars and then simply use the spotting scope to take a closer look at an animal or other object of interest. Thus, the smaller FOV is really a non-issue for me and the manner in which I use my optics in the field.

The last and likely most obvious draw back to the Kowa spotting scope is under low light conditions. It seems unreasonable to expect that a little 55mm objective can hang with the light gathering ability of an objective lens that is nearly two and a half times larger. That being said, when compared to other 50mm spotting scopes I have used in the past, the Kowa out classes them extremely easily. In fact, when day light faded the Kowa actually performed about as well as some of the 65mm scopes I compared it to in comparable price range to the Kowa.

I realize I just spent the last three paragraphs listing negatives to this spotting scope, but please understand I am being very critical and know that comparing this scope to my 85mm Zeiss isn’t exactly a fair fight. Going forward, I expect the Kowa TSN-553 will be in my pack more often than the Zeiss despite these drawbacks. After using the Kowa for over three months now, I feel ounce for ounce the power range and the clarity it offers is extremely hard to beat.

So next time I am hiking 10+ miles in to go on a caribou or grizzly bear hunt, or hunting deer or mountain goats on Kodiak, it won’t be the fat 85mm Zeiss I will be hauling in my pack. The Kowa TSN-553 will get the job done, in a smaller and lighter weight package with performance that won’t leave me wishing I had the larger spotter along.

You can comment on this article or ask Luke questions here.