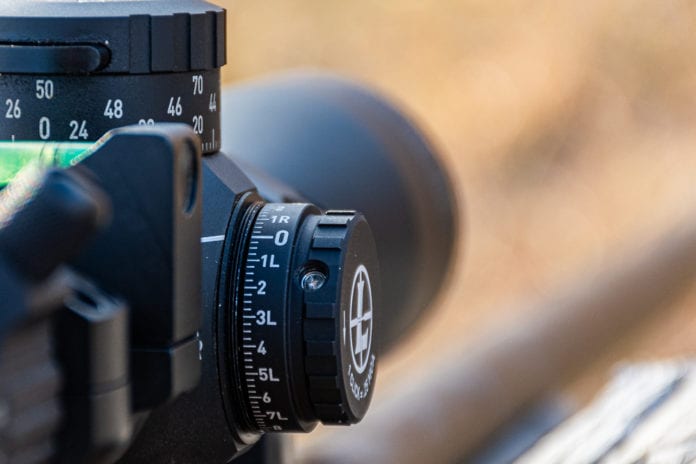 The American West is big and wide-open.  It is a romanticized landscape of prairie grasslands rolling into abrupt mountain fronts that veer into the heavens and terminate at the jagged cap of the Rocky Mountains.  Pronghorn antelope feed on the plain, elk bugle in the forest meadows, and shaggy mountain goats tiptoe from ledge to ledge way above the tree line.  Western hunters need gear suited to this amazing landscape and the big game in it. Gear like the Leupold Mark 5HD (more info here).

These tough and capable critters necessitate tough and durable gear.  The longer ranges common to hunting the American West are well suited to accurate rifles, and accurate rifles need accurate, dependable optics.  However, riflescopes that meet the criteria are usually big and heavy.  Making gear choices that cut weight are also important when long miles and tough terrain are on the schedule.  To find the balance between accuracy, durability, and weight, I went with a Leupold Mark 5HD 3.6-18X44 riflescope. I mounted it in Leupold Mark 4 rings on top of a super-accurate Mesa Precision Arms Carbon Hunter rifle (reviewed here) chambered in 300 Winchester Magnum.

Leupold is the granddaddy of US Sport Optics Companies.  The original Leupold and Volpel surveying equipment company was founded in 1907.  The name changed to the current Leupold and Stevens in 1942 and becomes an optics company in 1947 with the introduction of the fog-proof “Plainsman” riflescope.  Most western hunters know the story from there, and Leupold has been the omnipresent American riflescope manufacturer since.

Last spring, I was invited to check out Leupold’s manufacturing facility in Beaverton, Oregon. I spent a few days shooting at their facility in Madras, Oregon along with a few other writers.  It was a fantastic experience for an optics geek like myself, and I walked away with a tremendous amount of respect for the effort, science, and craftsmanship that goes into building a riflescope. I also had a great time shooting at steel out to a mile in Central Oregon with a few new friends.

The scope we used in Oregon was the big brother to my 3.6-18X44 test scope:  The Leupold Mark 5HD 7-35X56.  The group sent hundreds of rounds downrange from a pickup-load of Ruger Precision 6.5s and a 338 Lapua Magnum, all topped with identical Mark 5s.  Each of these scopes was taken out of a sealed box and mounted by each shooter themselves.  I didn’t hear a single complaint from any of the shooters.  Every single scope dialed the correct adjustments and returned to zero.  It was very impressive performance from so many units.

First I generated a subtended test chart.  The reticle subtensions on the First Focal Plane PR-1MOA reticle were perfectly aligned to the test chart, and scaled with magnification.  Using a machine rest, I dialed box tests in all directions with the reticle matching the marks at all corners and returning to zero.  One thing I noted as I got to the very end of the 100 MOA internal adjustment was there was a small delay between clicking the turret, and seeing the reticle move.  This occurred only in the last 2 MOA of travel.  Overall, the Mark 5HD had excellent, repeatable tracking.

The Mark 5HD has Leupold’s “M1C3” Dial system which includes a zero-stop elevation turret with push-button lock and revolution indicator.  There is a generous 25 minutes of travel per revolution.  Setting the zero stop is a piece of cake: Loosen the set screws, remove the turret cap, zero with the internal turret post, mount the turret, and set the screws with the 0 mark at the witness mark on the scope.  Done.  The Mark 5HD had the best, most tactile clicks I have used in a Leupold scope, and worlds better than the baseball-card-in-spokes clicks of the earlier Mark 4 series scopes.

The magnification ring spun smoothly with firm resistance.  The scope comes with a short throw lever installed that makes magnification changes easier, especially with gloves.  Eye relief is advertised at 3.5-3.8 inches through the range.  The eye box was fairly forgiving, and I felt like I had plenty of room.  Eyepiece focus is the “fast focus” style which is easy and intuitive to set up, and it stays put.  The side focus parallax adjustment is adjustable via set screws and is marked for 75, 100, 200, 400, 600, 800 yards and infinity.  My test scope was not illuminated, but the illuminated reticle versions have the illumination control sitting on the parallax knob. The capped windage turret is fully waterproof with the cap removed. The witness mark is near the top of the tube where it is visible in a shooting position. 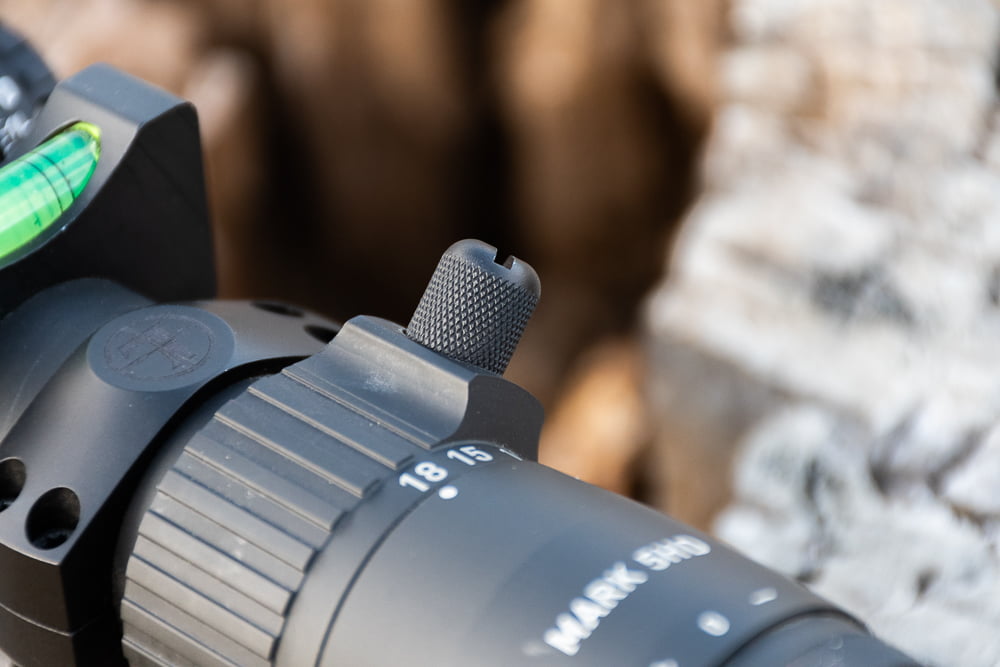 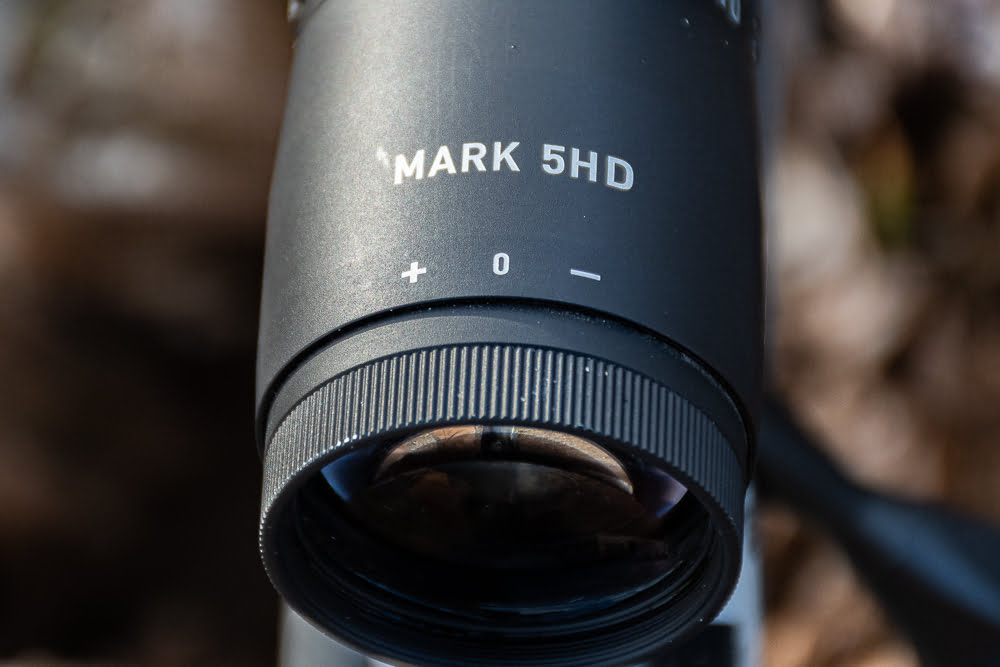 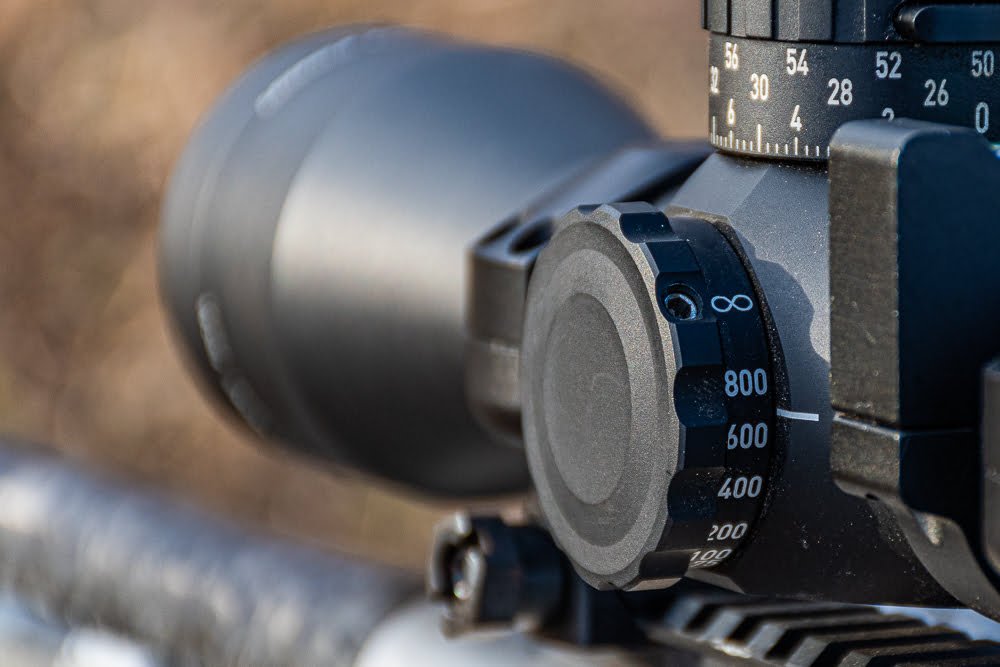 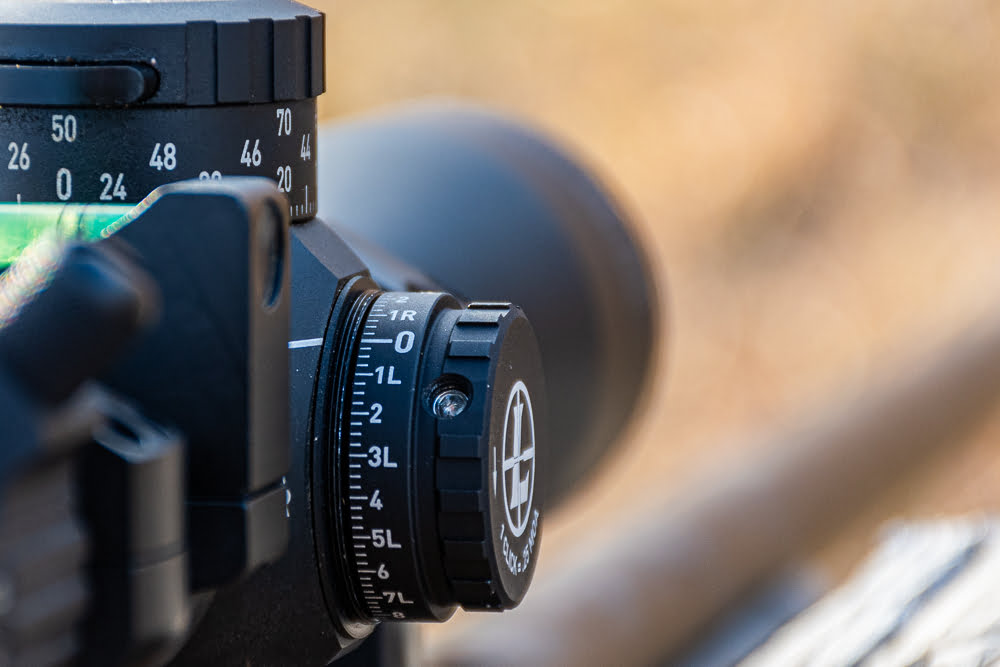 My scope is one of the MOA/MOA versions available with the FFP PR-1MOA reticle.  The reticle is an uncluttered hash reticle with a floating dot center.  The vertical reticle is labelled every 10 MOA under the zero line and labelled every 20 MOA above the zero line.  The horizontal reticle has labels every 20 MOA as well.  The reticles are subtended thicker from 40 MOA out. The vertical reticle above zero, and both sides of the horizontal reticle have a medium thickness reticle from 20 MOA to 40 MOA.  The result is a FFP reticle that is pretty visible at all powers, although at the very bottom end, from 5 power down to 3.6, the thinnest, center portion of the reticle becomes hard to see, especially on dark backgrounds.

I would love to see a second focal plane version of this reticle and scope.

While I was in Oregon with Leupold, they woke us up at 3:30 AM to head out to the range.  They had a table full of scopes from Leupold and their major competitors for side-by-side comparisons in the pre-dawn light.  It was immediately apparent why Leupold generates this opportunity for writers.  Their optical designs and coating choices are squarely aimed at low light performance.  At every price point the Leupold scopes had a noticeable advantage over the competition.  The Leupold Mark 5HD showed this in spades.  Even against the European competition, the Mark 5HD maintained the edge in apparent brightness against scopes at similar price points.

Outside low light conditions, The Mark 5HD is still an excellent optical performer, with punchy contrast, low distortion, and great resolution.  The one niggle I saw was a little more fringing from chromatic aberration than some other high end competitors.  Optical performance is good to great in just about every category.

The magnification range of 3.6x to 18x is near ideal with a super wide field of view and bright exit pupil at the low end combined with true long range capability at the high end.  There is just a small amount of tunneling at all powers, and it is consistent throughout the magnification range.

This is a compact tactical scope.  The Mark 5HD really pulls away from its competition here, as the 3.6-18 is only 12.06 inches long and a very light 25.5 ounces.  Some competitors are over a pound heavier!  This leaves a relatively narrow mounting area of less than 6 inches, but I had no problem mounting it on the Mesa Precision’s rail.  Unfortunately, the Mark 5HD’s tube size is 35mm rather than the more common 34mm. This limits mounting options are a little more, but Leupold and several others do offer compatible rings.

Those compact dimensions and light weight really help out in the backcountry.  Mated up to the Mesa, the field-ready setup was only 8 pounds and carried easy in a Kifaru gun bearer.  The moderate turret size let it slide easily in and out of the horse scabbard as well.

I generally prefer second focal plane reticles in hunting scopes, but I got along fine with the Mark 5HD’s PR-1MOA, and it had a couple of nice benefits that came up in the field.  While practicing under the high summer sun, I was able to dial back a little bit on magnification to minimize mirage, but still use the subtended FFP reticle for wind holds.  I was also able to dial it back for additional FOV for my daughter to find her elk easier, and still have the reticle available to her for a wind hold if needed.

Besides the machine rest testing I did, I also shot the Mark 5HD on two different rifles throughout the pre-season. I found adjustment to be dead nuts and the scope returned to zero in all cases.  I had absolute confidence in the scope going into the hunting season.

The scope performed flawlessly dialing in on three game animals.  The first was my Montana Mountain Goat that I took at 487 yards at nearly 9,500 feet in elevation.   After the shot, I dialed the scope back to the 100 yard zero for the long and arduous packout.  After returning home, I verified zero and punched a hole right through the bullseye.  Next up was a pronghorn buck in the wind at 584 yards.  The 215 grain Berger Hybrid hit right at point of aim, and dropped the buck in his tracks.  Again, back at home I verified zero with another first-shot bullseye.  Finally, my 13-year old daughter dropped her first bull elk at 315 yards.  The post-season zero verification?  You guessed it … right in the middle.  The Mark 5HD’s adjustments and return-to-zero were flawless for me.

Hunters looking for a long-range capable, reliable-dialing scope that doesn’t weigh down a hunting rifle don’t have a lot of options.  Luckily, the Mark 5HD 3.6-18X44 fits the bill.  It has the optical performance to make shots in tough low light conditions and has tried and true mechanicals for dialing in and/or holding solutions.  With the Mark 5HD, Leupold has really upped their game for backcountry long-range hunting market.  Street price for the 3.6-18×44 scope as tested is currently around $1800, while the illuminated version is $2300.  Besides the 3.6-18X44 and 7-35X56 models, there is also a 5-25X56 version available between them in the line. More info here.

You can comment on this review or ask Matt questions here.