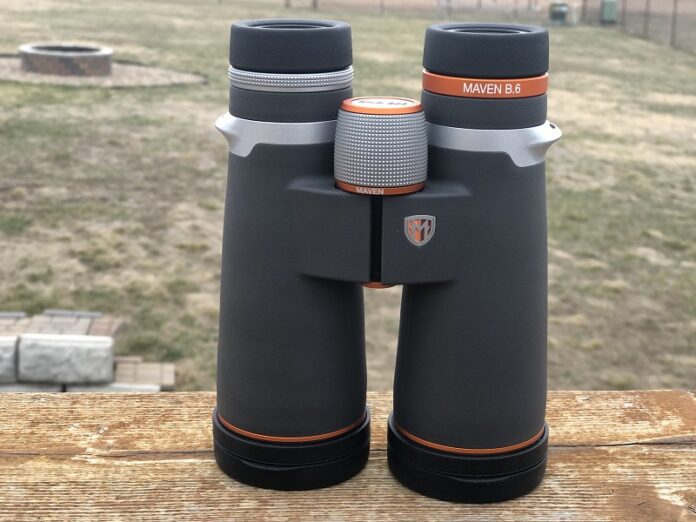 When given an opportunity to test a pair of Maven binoculars I was excited to give a company that I am unfamiliar with a try. The folks over at Maven take their optics seriously and I couldn’t wait to test the new B.6 12×50’s on a couple of late-season hunts. I am well versed in using the Vortex Razor HD and UHD in 12×50’s that would be a good base bed for judging this new binocular.

As I opened the packaging I was happy to see the construction of the Maven binos. I received the gray and orange color combination and they are truly eye-catching and really stand out. The craftsmanship looks great and the construction seems to match right up there as well. But like many things in life, eye candy may look good but how would they perform?

As advertised, the components of their optics are made in Japan and assembled here in the US. Included in the package were a neoprene neck strap, lens caps, and a double-layered microfiber storage bag. I opted not to use the included neck strap and lens covers as they would be going right into a bino harness anyway to help keep them protected. 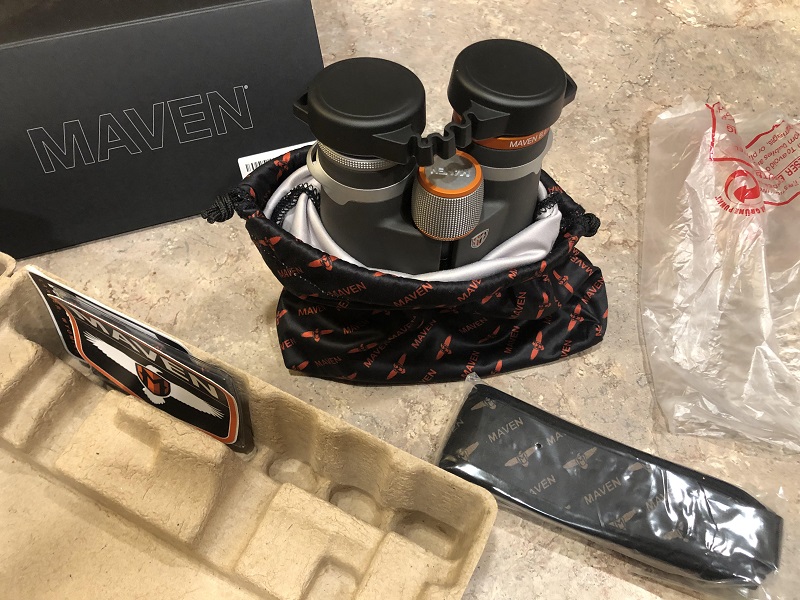 I walked out onto my deck and raised them to take a first look through the Schmidt-Pechin prism and liked how bright and crisp the image was. These are a step up from their B.1 binocular and enhanced with a larger objective and prism. This optic is meant for those that are looking for a smaller frame binocular with the highest of light gathering properties. After all, early mornings and dusk are when the critters tend to move the most so it makes perfect sense. These are tripod adaptable so those looking to use them that way will have no issue. It is easy to tell right away if you are using quality optics and these didn’t cause me to second guess them at all. They are impressive right away. 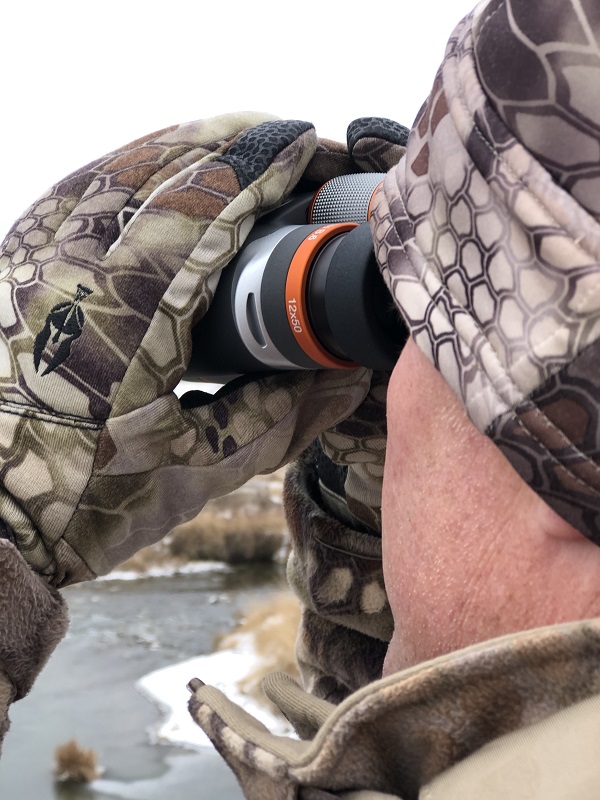 The temps were hovering in the 20’s as I climbed a tree and fixed a treestand into position. I had killed a good buck here in the past and the trails were evident below the stand at 20 yards. The biggest change was the lack of grass due to the ongoing drought that North Dakota has been experiencing. As I settled in, I grabbed the Mavens from my bino pack and scoured the closeness of the trees and that of the distant prairie in search of moving critters. The light was beginning to fade in short order and the 50mm objective helped gather light handsomely. 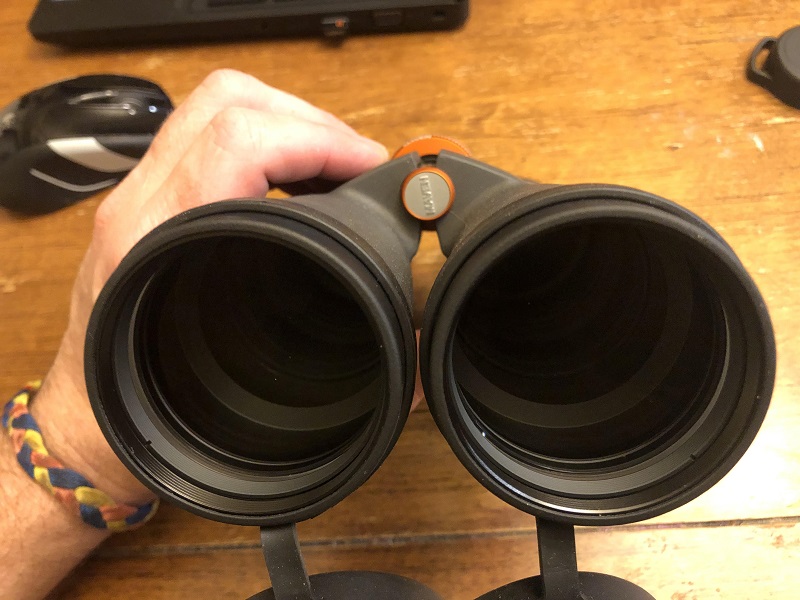 The next morning I was in a new area glassing distant land to really test them out. I used them both with a tripod and without, and they performed great either way. They fit my hands well and were comfortable to use. The rotating eyepieces were flawless and the ease of focus was on point. These performed great without the use of a tripod and were very easy to steady freehand. When used with a tripod, they become even better and it helps you appreciate the crisp image and full color they capture. 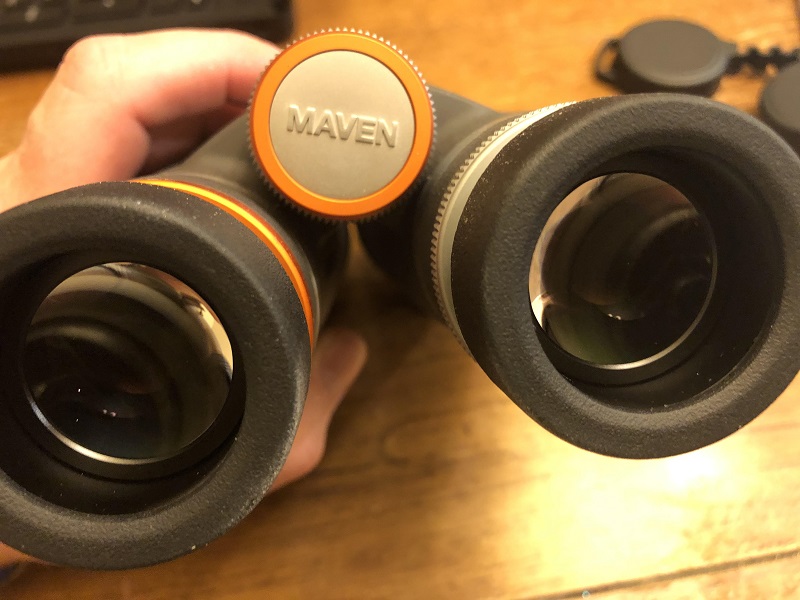 Maven B.6 vs Vortex Razor HD and UHD

Many have been asking how they compare to the 12×50 Vortex binoculars. The following day my wife and I took turns between three binoculars. The Vortex Razor HD and UHD as well as the Maven B.6, and all in 12×50’s. We decided to form our own opinions on the three of them and rate them based on how they performed against each other.

After over an hour of testing between the three, we both talked about our findings. We had picked out distant objects to help us determine how each performed in relation to each other. How are the images, color, distortion, focusing, crisp lines, etc…?

The three of these optics are very close in nature and we felt we are almost comparing apples to apples at times but we started noticing the differences between the three as we tested them. They resemble each other so closely in performance that I feel some may have different thoughts than we do so I planned to also have others test these same three to see what they think. 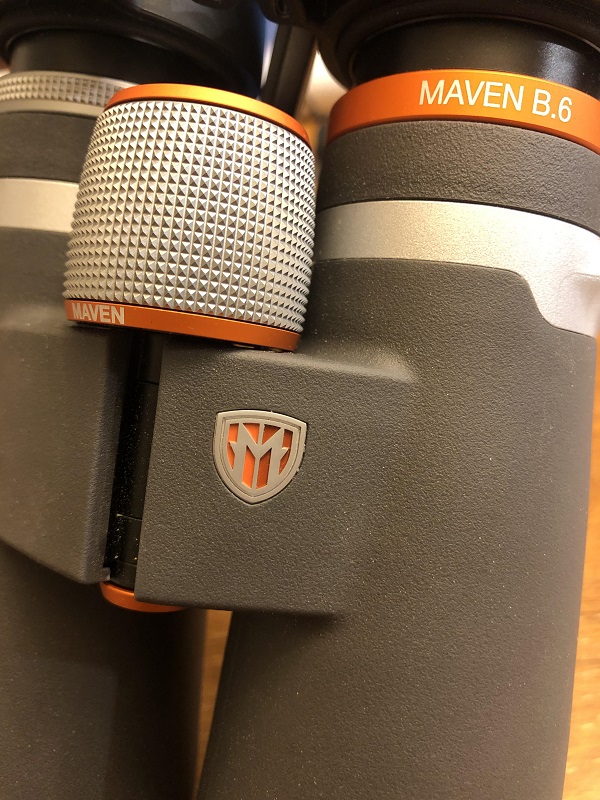 I feel the Vortex Razor UHD still performed best without question but they also cost twice as much. Many of my family members looked through both and we were split on which performed better. Some even felt the Maven outdid the UHD as each eye is different behind the glass.

If the price is a decision-maker, I feel many will go with the Maven, especially if they are standing in a box store waiting to make the purchase as you cannot see the difference until you really test them in the outdoors in real-world type hunting/glassing situations.

Maven did a great job in putting the B.6 together and with a much better price point for a binocular that performs as great as it does! It holds crisp images and color is very accurate across the spectrum. Easily focused and easy on the eyes, not only to glass with but also to look at, it is one handsome piece of craftsmanship that I would put above that of the Vortex Razor. They just look dang good! 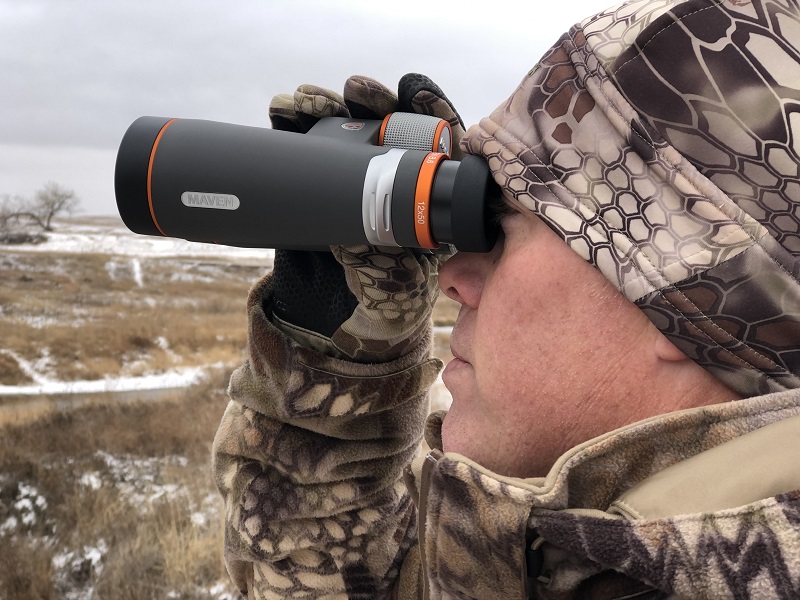 I really enjoyed using the Maven glass and I am quite impressed with their performance! Many are shy about using a 12×50 binocular freehand without the use of a tripod, but I wouldn’t hesitate using these without a tripod. 12×50’s really have become my favorite and I enjoy using them freehand and even more with the use of a tripod. You won’t regret the purchase of this binocular!

Maven has an unconditional lifetime warranty to help ease your mind. They stand behind their product as all good companies do. Buy them with peace of mind and know that they will do a great job for you! Order yours here.

Comment on this review or ask Jared questions here.

You may also be interested in our other Maven Optics Reviews.