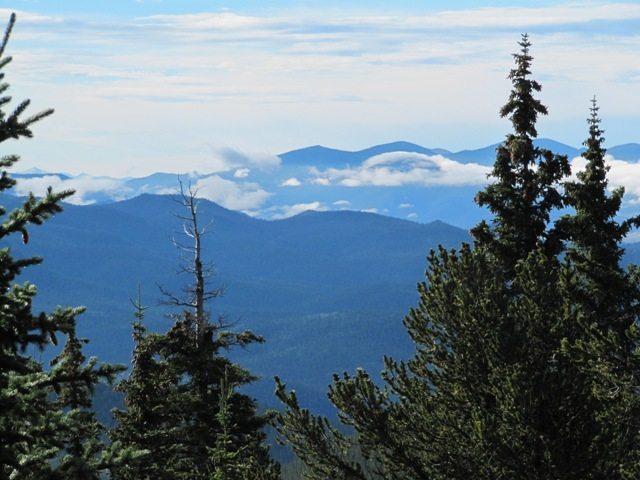 Upon hearing the elk jump from its bed and crash downhill, I signaled Mike to stop and listen. His extreme elation immediately changed to extreme concern. How could this bull still be alive after such a great shot? I was thinking to myself that it wasn’t possible, even though the huge blood-filled beds were empty. I stood there processing Mike’s shot, the extremely heavy blood trail and was thinking it can’t be, when Mike yelled “HOLY CRAP THERE HE IS!” To other hunters and even other elk hunters it is impossible to describe the emotions that hit us, Mike especially.

After an hour of emotional celebration, picture taking, and some breakfast it was time to get to business. By late morning we had the bull tagged, bagged, and hung. The goal was to get enough of the animal back to our camp so that Mike could finish taking care of the bull while I headed out for an evening hunt. A few trips later we were happily tired. It’s amazing how a little interaction with the target species gets your enthusiasm amped back up, not to mention interaction with the bull of a lifetime!

I decided to make a banzai trip back up to that high alpine meadow we had discovered earlier in the hunt, hoping that nice bull had returned to the area. It was quiet as the sun started to dip below the mountain; I knew I had about an hour to make something happen. 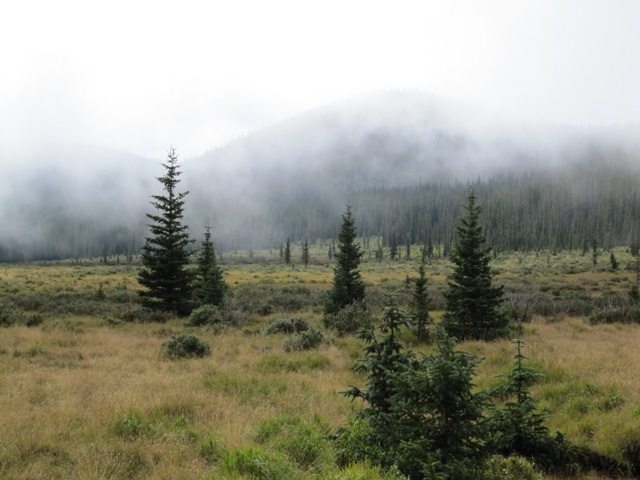 My plan was to cover ground as the elk should be on their feet and moving by now. I was moving a little quicker than I should have been and bumped a nice bull with a small herd of cows that was silently coming to my calls. I trailed them as they headed in the general direction of camp but never caught up. Just as the sun set, I sat on a log to do some light calling, and reflect on the days’ events. The air was crisp and it was peaceful to just chill and enjoy the canvas being painted across the sky. 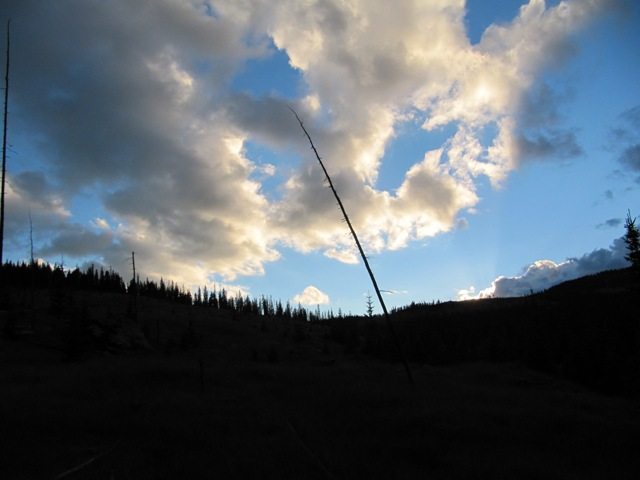 I was thinking to myself that one tag was notched with the bull of a lifetime, the moon was swinging in our favor, and we still had a solid week left to hunt! Then it began, gunfire, and lots of it. Bang, bang, bang! My recent positive thoughts were fading as quickly as the remaining daylight. Darkness crept in so I dialed up camp on the GPS, took a compass bearing, and turned on the headlamp. It felt like each step I took downhill was matched with a gunshot and lowered confidence. It was total darkness, mentally and physically, by the time I reached camp. I muttered to myself wondering why, what, who, as I stashed my gear listening to the continued shooting.

I did realize this was public land and that the shooters weren’t breaking any laws. It just made it a really bitter pill to swallow knowing that the elk I planned to hunt in the morning should be headed towards that area right as all of this was happening. After cashing in a lot of preference points this wasn’t on the “supposed to be happening” list!

With gear stashed it was time to eat. It was about then that the shooting stopped and I think Mike could sense my disappointment, agreeing that it certainly didn’t help our odds, but he was also still pretty confident that we would get the job done. I wondered if having a few hundred inches of antler attached to his tag made him more optimistic than me? It had been an extreme day and I know I was ready for lights out. As physically tired as we were, the mental gymnastics happening in our heads didn’t allow for immediate sleep. Pretty soon we were talking about the shot, the pack out, and how things can change at the drop of a hat. About then, we heard the first bugle of the night! We were grinning ear-to-ear.  Throughout the night, we were awoken by the sounds of bugling bulls and clashing antlers. Awesome.

Scant hours later my watch alarm went off and I awoke to the sounds of the elk party below us still carrying on and I began to dress with a renewed fervor. After a physically demanding day and having the “pressure” off, I think Mike was contemplating sleeping in, but after a few minutes of bugling and my head lamp “inadvertently” shining on his sleeping quarters, he arose and started to dress. 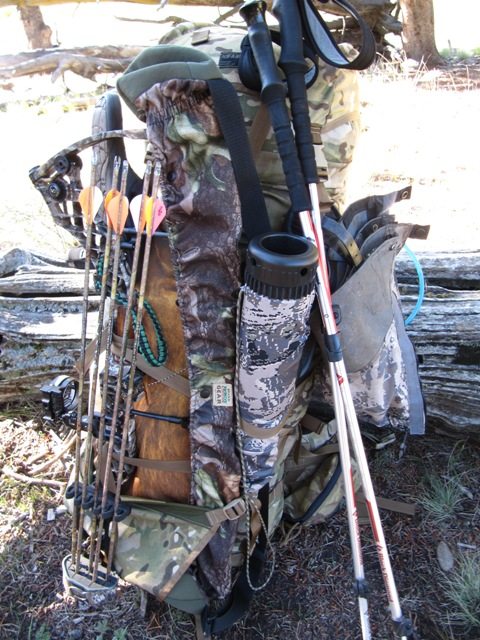 That morning, for the first time, we were able to get on elk while they were still bugling! We continued moving behind the elk and at one point had to stall our approach as we were closing in but didn’t have hunting hours in our favor yet. As the world seemed to come alive, we were working on hand signals and motions refined over years of hunting together.

I moved ahead and readied myself as Mike began sounding like a herd moving up the mountain. At least two bulls were responding to the cow and calf calls that were coming from behind me. Each time the bulls gave away their position I would move forward using the wind and openings to my advantage. The next bugles were actually farther out and starting to climb away from us, so we continued pursuit.

We reached a small canyon that was mostly pine with little undergrowth or cover. Even if we had a desire to cross through the bottom to the other side, we couldn’t do it without being seen. As we strategized, we confirmed that we still had morning thermals and a steady crosswind in our favor. We decided to parallel the canyon which had us flanking the elk a short distance ahead of us. Based on bugles, it sounded like there was another herd bull towards the top of the canyon, with two other bulls and the cows heading towards the bugles from the mountainside above.

As we gained elevation, the “Player” continued to bugle at us. The distance was narrowing across the canyon and it was looking to be more suitable for an elk to cross if given the right temptation. We decided to give it ten minutes of silence and took a drink and a quick snack, letting the bull wonder what was going on. Mike cow called as we stood and started to discuss our next move. Simultaneously there were the sounds of a large log being hoofed, the bull bugling, and some rocks tumbling downhill. I realized that he was close and instinctively I bailed down the hill to get some separation from Mike and put the wind to my advantage.

I clamored over rocks and logs as fast as I could. I positioned myself, knocked an arrow, and glanced up the hill at Mike. He was frantically pointing in front of me signaling that the bull was visible to him. I repositioned slightly to gain better shooting lanes and within seconds could see antlers coming towards me. The bull was a good 6×6, and definitely “a shooter”. At a distance of 30 yards he stood facing me with only a lone pine standing between us. Not seeing the cow he was looking for, he turned broadside and began to move up the hill toward Mike’s cow calls. Seeing a big opening just ahead of the bull, I drew my bow. He walked into the opening with no sign of stopping, so I lined my pin up on the leading edge of his chest, followed through and squeezed. Much to my disappointment I watched the arrow slide harmlessly under his chest behind his front legs deflected by an unseen pine branch. I cursed myself for the error. I was finally given a good chance on day 10 and didn’t seal the deal. Ughhhh.

I cow called instantly after the shot, as did Mike, not knowing I had missed. The bull had spun and headed away from us at the miss, but turned back to look for the source of the sweet sounds he was hearing. My next arrow was already knocked and within seconds he was walking directly at me, looking for love. Not seeing the cow he expected to see, the bull turned 90 degrees to his right and started up the mountain looking for the other cow he had heard. Unbeknownst to me, the bull was about to walk right into Mike who sat motionless on a rock only a few yards away capturing it all on his digital camera! With the bull at 20 yards I was rock steady and knew that it was game over.

Everything turned to slow motion as I let out an All-Star mew and the bull came to a slow stop swiveling his head to look at me as the arrow was already enroute and slicing through the hide leaving a Slick Trick star right in the sweet spot! Instantly the bull jumped and trotted 10 yards, but stopped to look back as we both cow called. According to Mike’s video, twelve seconds after the shot he began to stagger and four seconds later he was on the ground! An extreme array of emotions blew threw me again. There’s nothing like hunting elk in the high country in September. 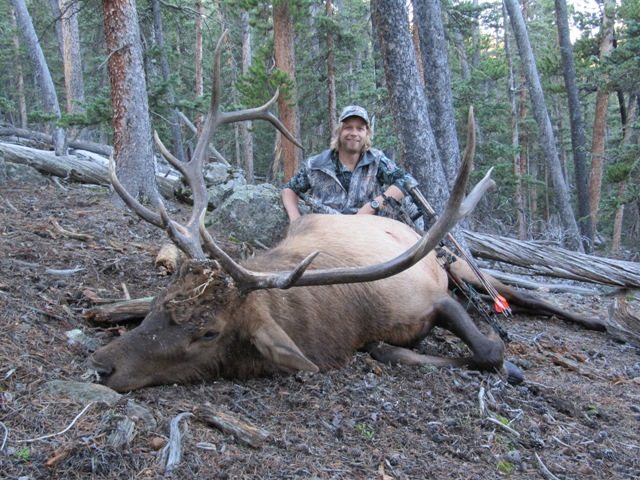 It wasn’t even 9 a.m., but I was mentally drained. After the disbelief turned to reality, we decided to sit and have breakfast before breaking down this beautiful animal. By lunchtime we had taken pictures, bagged the bull, and were ready to head out with the first loads. We finished hauling as the evening neared and it began to rain. Although we were weary and tired from two days of packing we decided to break camp and head out of the wet wilderness yet that night. 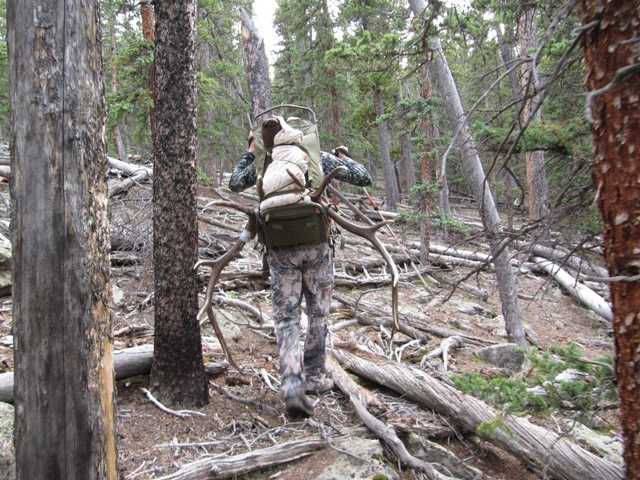 We got a few hours driving out of the way before stopping for much needed showers and well appreciated beds. The next morning and back on the road, we reflected on our incredible fortune as the miles clicked by at 80 mph. It was Friday the 13th as we entered the flats of Nebraska, but we felt we’d beaten the day’s curse. Suddenly, the right rear tire exploded taking with it the exhaust, a brake line, the right box side, and the rest of our luck with it, but that’s another story!