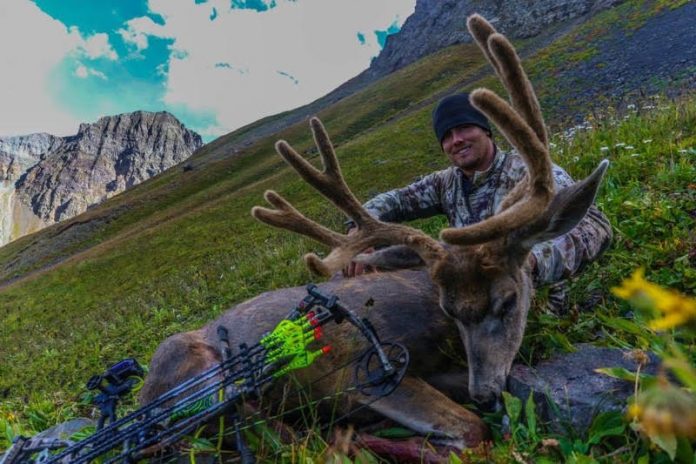 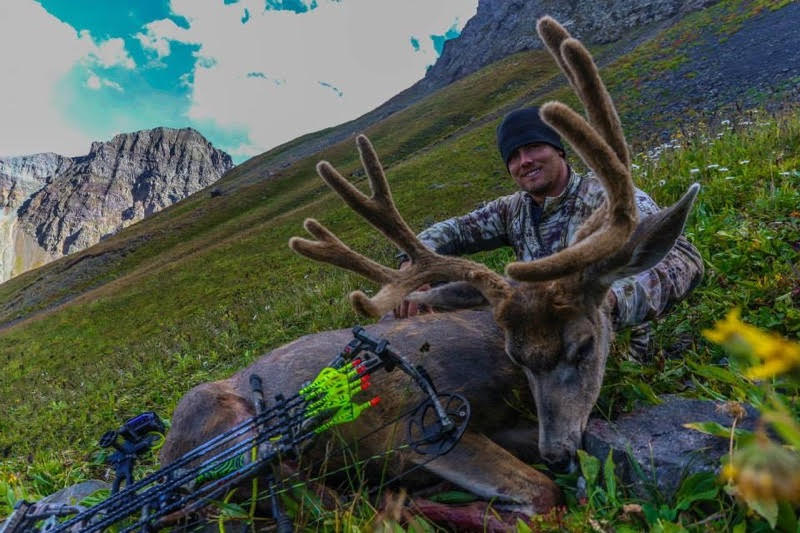 Every year after hunting season is over, most people will throw their bow in the closet not to be touched again until the following year. Nine months later they are scrambling last minute trying to get everything together for the upcoming season. This is one of the worst habits one can have as a hunter, and one that really needs to be broke in its entirety. You as a hunter have the responsibility to ensure when you drop the string on an animal, you are confident that the shot you made will hit its mark and produce a clean, lethal, and ethical shot. Multiple factors play into a true hunting scenario that will cause missed shots, or even worse wounding the animal. But you can drastically minimize most of those factors by making sure you are putting in the time and effort in the offseason shooting your bow, and properly preparing for the upcoming season.

Last year after a 3 mile stalk just to get above my buck. I had to drop down a rock-chute in some of the nastiest, most unforgiving country I had ever been in. With my toes dug into each wall of the rock-chute. I was able to peak around the cliff band and range my buck in his bed. He was laying below me at 92 yards, but with the severe angle I used my 70 yard pin. After a few minutes of gaining my composure for the shot, my opportunity had finally arrived. I was able to squeeze off a perfect shot. He made it 80 yards before piling up. This shot alone is a perfect example of why practice in the offseason is so important. If I just pulled my bow out of the closet the week prior knocked the dust off of it and started shooting. I would have not been prepared to make an ethical shot in a situation like that.

The offseason is the perfect time to ensure your bow is shooting to the best of its ability. Spend the time properly tuning and setting up your bow. This includes things like checking axis adjustments, maintenance, and tuning. I am not going to dive deep into the tuning subject because it is one you can write a novel on, but it is an important one to at least touch on. I am a big fan of both paper and walk back tuning as they will be your tell all of anything being out of tune. Some people will take tuning additional steps further with other methods, such as bare-shafting, broadhead tuning, etc. Fixed blade broadheads will drastically magnify any tuning related issues you may have, so it is very important to take care of any of those issues ahead of time.

Make your practice time count! My practice sessions consist of multiple different shooting scenarios. Anything from blind bail shooting, spot shooting, 3D, Vegas leagues, long range or even grabbing a target and running up the mountain to practice steep angle shots. Changing up your practice sessions between these, not only keeps shooting fun. But it also constantly challenges you to stay at the top of your shooting game no matter the shot you are presented.

Blind Bail: The best part about this is you can do it anytime day or night. Set up a target about 5 yards away draw your bow anchor and close your eyes. Concentrate on your release and follow through. This drill will keep you brushed up on proper form and technique. It will also help cure any target panic issues. 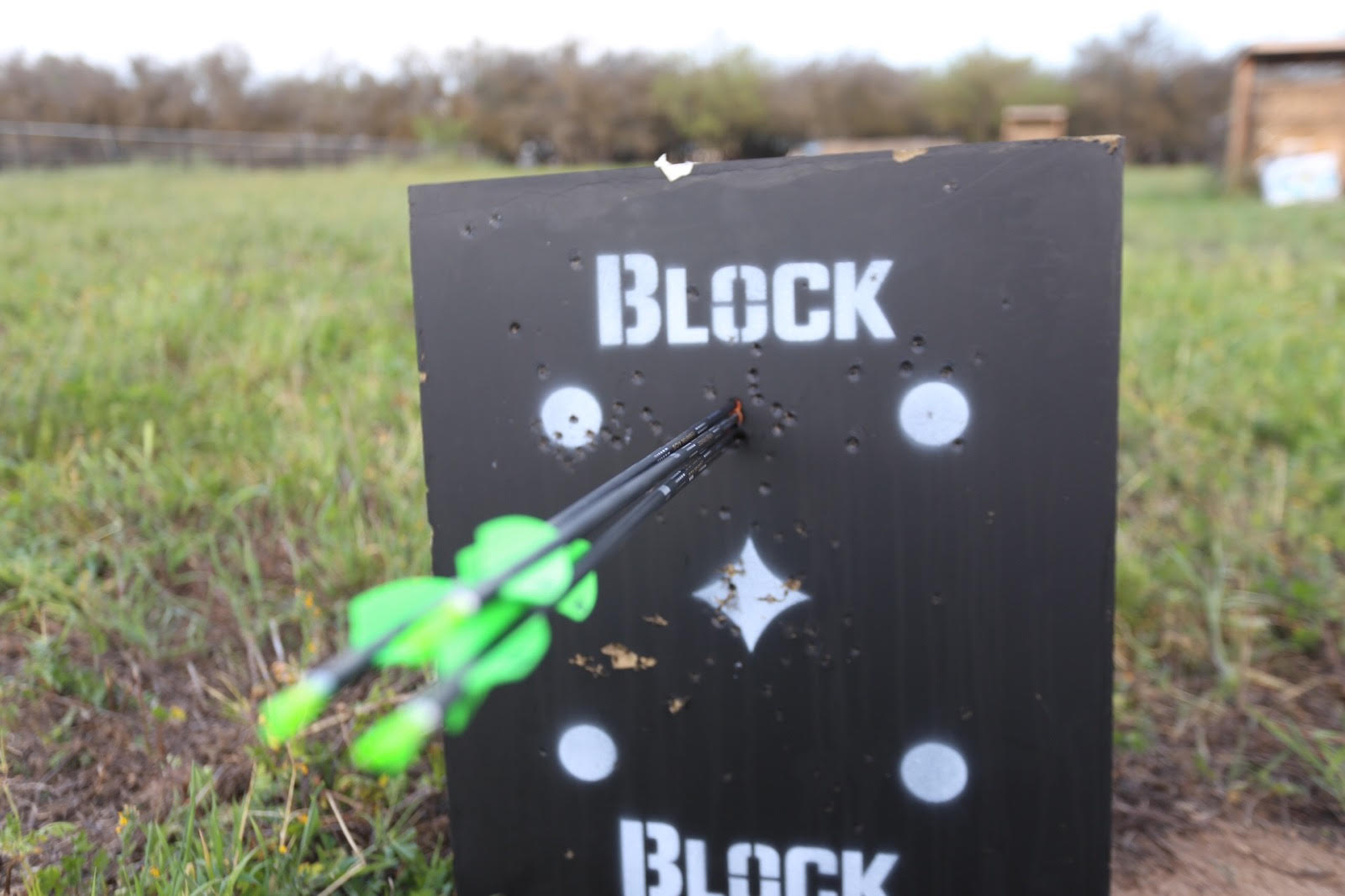 Spot Shooting: The good part about spot shooting is you don’t need a ton of space. Set up anywhere between 10-20 yards and put a small dot (dime size) on your target, concentrate on really aiming at the spot while you release. This drill really emphasizes the aim small miss small philosophy. It teaches you to pick a spot and concentrate on it until the arrow hits the target.

Long Range: This is my favorite kind of shooting. I will normally shoot out to 120 yards religiously. This kind of practice will not only magnify any form issues, tuning issues, or wind issues. It will also help with extending your effective range and making those 60-70 yard shots seem like chip shots over time.

Shooting Angles: Whether shooting uphill or downhill angles, I feel this is one of the most overlooked and most important forms of practice one can do. As often as we take angle shots while hunting most people won’t take the time to practice them because of convenience or time. Emphasis on proper form for steep angle shots is one of the most commonly overlooked issues. The only way to get efficient at it is to practice. 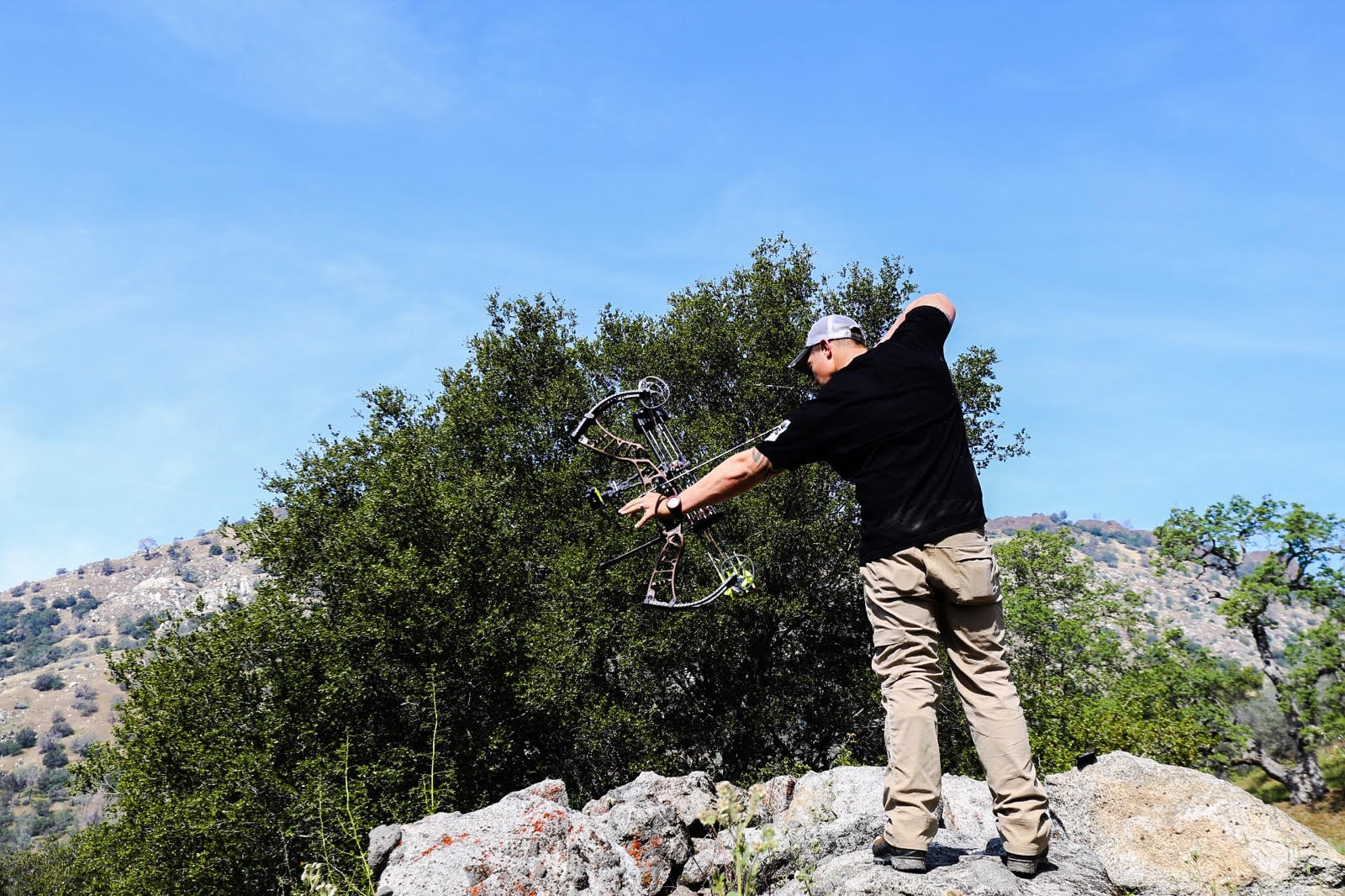 Leagues: When it isn’t hunting season I try to shoot as many archery tournaments as possible, anything from Vegas style indoor, to 3D tournaments. I strongly feel that the pressure of tournament archery is the closest resemblance of adrenalin one can have to being within bow range of a screaming bull, or a monster buck. Not only will you feel the same amount of pressure while shooting, you will learn how to perform under that pressure consistently. 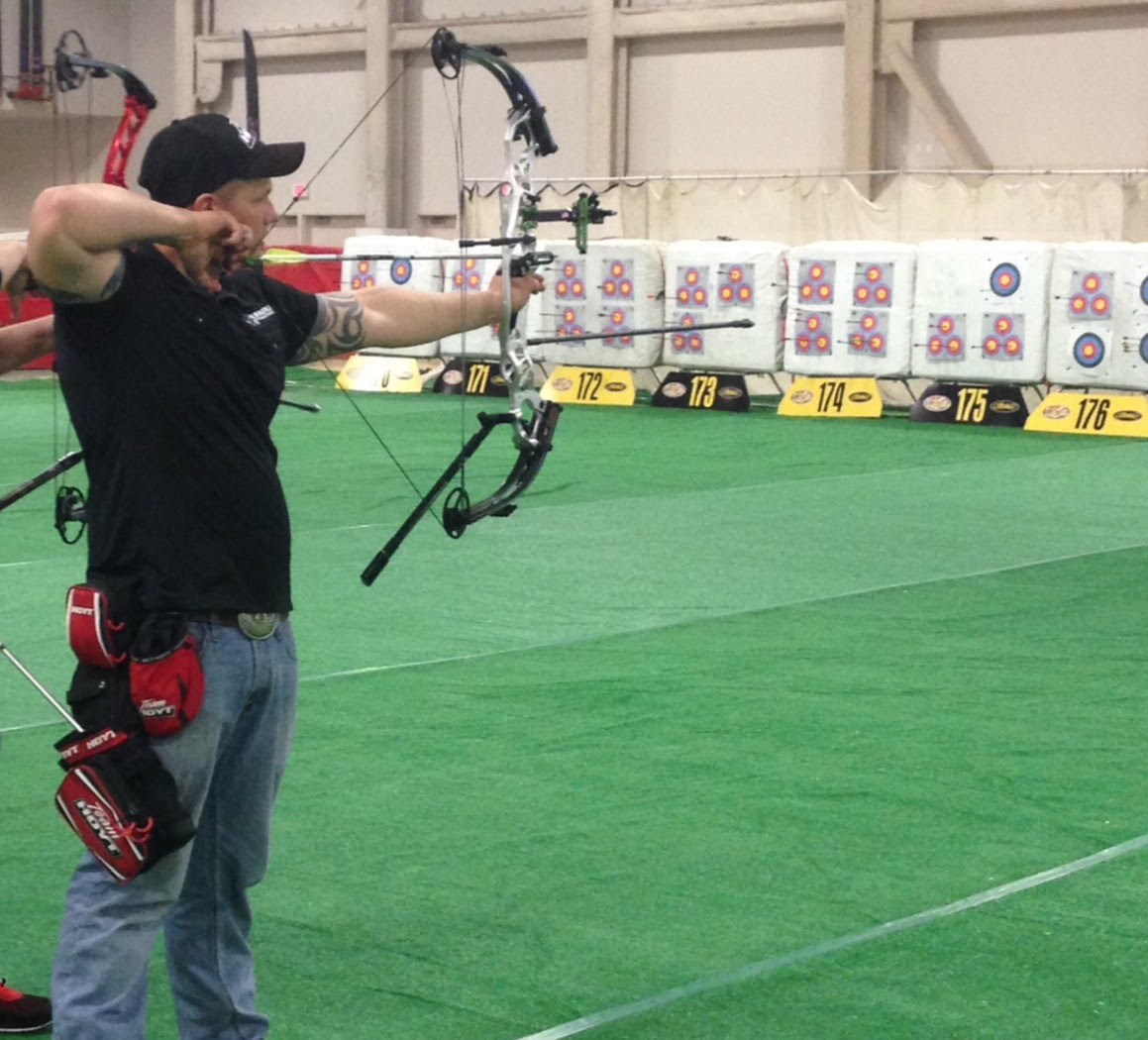 3D: Chances are you have a 3D course somewhere around you. Not only is 3D great hunting practice, but is also a blast to do. It compounds everything you have been practicing into one. 3D really emphasizes on picking a spot on an animal and concentrating on it, instead of just aiming at a target face all the time. This is as close to a realistic hunting scenario you can ask for.

A huge mistake I see all the time while guys are getting prepared for hunting season, is not shooting their complete hunting set up. I am referring to things like, not shooting with a full quiver, not shooting the heads they plan to hunt with, even as far as the clothing they plan to wear. Not saying you need to wear your hunting clothing every time you shoot, but things like gloves or thick jackets can make a significant difference in your shooting, and should really be taken into consideration. Shooting with no arrows in your quiver doesn’t seem like a big deal, but when you add up the additional weight you just added to the side of your bow, or even the added mass for wind deflection. It has the capability of making a drastic difference, especially while shooting steep angles. I personally shoot the heads I plan to hunt with and nothing else out of my hunting set up. That to me is just an extra reassurance that my arrows will hit what I am aiming at time and time again. When it comes time to go hunt, I just change out my blades to fresh ones and utilize the same arrow and ferrule combo I was just shooting for practice. 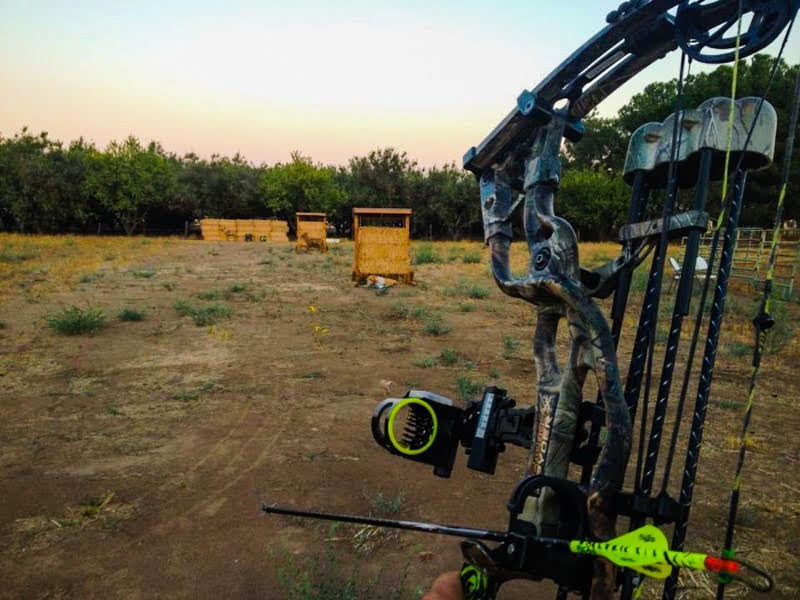 A good friend once told me “some people want to kill big bucks, and others kill big bucks”. That statement has stuck with me for a long while now. The successful guys are the ones out there busting their asses, and putting in the work to do everything they can do to ensure success, even during the offseason. With a little work and dedication in your offseason you can make sure you are that much further ahead of the next guy when it comes to putting animals on the ground!